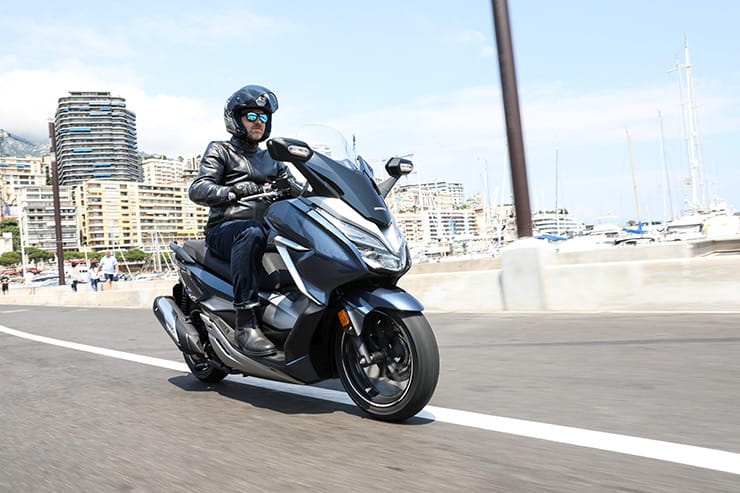 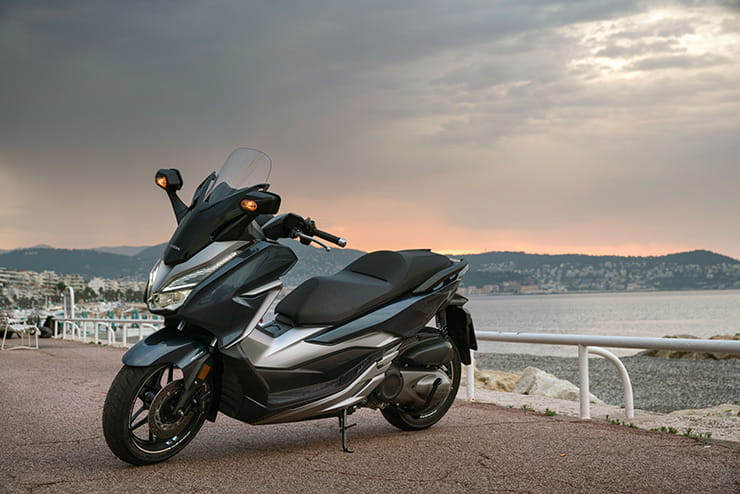 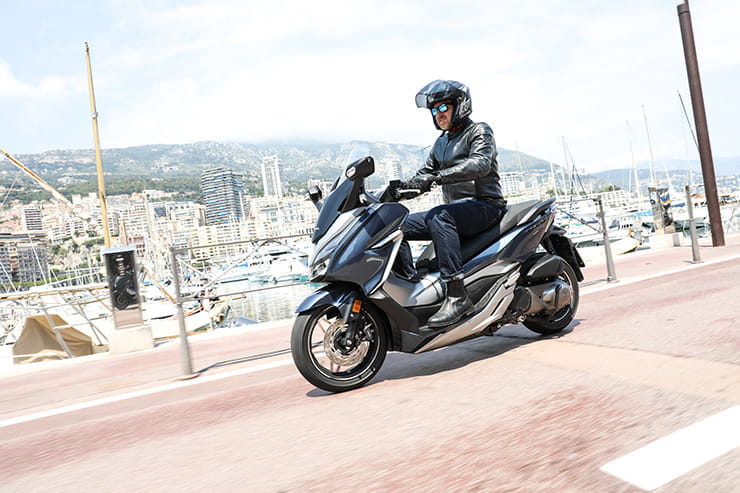 Honda’s top-spec maxi-scooter, the Forza 300, has been reborn for 2018 and combines power (for a scooter) with touring capability and a decent amount of storage space, including room for two full-face helmets under the seat.

Despite their popularity across the cities and coastlines of mainland Europe, scooters and in particular a comfortable 25bhp twist-and-go version with a 200-mile tank range and its accompanying usefulness hasn’t been as embraced by the UK. Are scooters seen as a poor man’s motorcycle? Are they not trendy enough? Do they carry a teenage-hoodlum-related stigma nowadays? Any of those would be an unfair representation to a wholly handy form of transport.

I owned a Yamaha XMAX 250 for a year while living in the capital a while ago and it was without question the ideal way to get around. So easy to ride and park, I could throw all sorts of stuff under the seat and carry a pillion without a problem. Plus it would happily cruise at 70mph on the motorway if needed. So, when Honda called and asked if we wanted to test the new Forza 300 (alongside the equally new Forza 125), I jumped at the chance.

>> See the introductory video from the double Honda scooter launch:

A price tag of £5,099 is competitive with its nearest rival, the Yamaha XMAX 300 which would cost £100 more. Representing excellent value when compared to a couple of years’ worth of city commuting using public transport not to mention the freedom, happiness and whole host of extra time in your life. Frugal too with a decent economy rate north of 85mpg

At the press launch in Monaco, I take a photo of the scooter in the marina and notice a boat formally owned by an old boss of mine, Mohamed Al Fayed. Known as Sokar, it was the vessel that famously played host to Princess Diana and Dodi Fayed’s last holiday 21-years ago. Mr Al Fayed sold for a reported $13m in 2014 – that’s the equivalent of 1,943 Forza 300’s which are easier to park and insure plus doesn’t require a crew to operate, although a Champagne-fuelled post-F1 party with high society’s finest would be tricky to host on a twist-and-go two-seater. I digress.

The new maxi scooter is expected in dealerships anytime now. Here. In the UK. 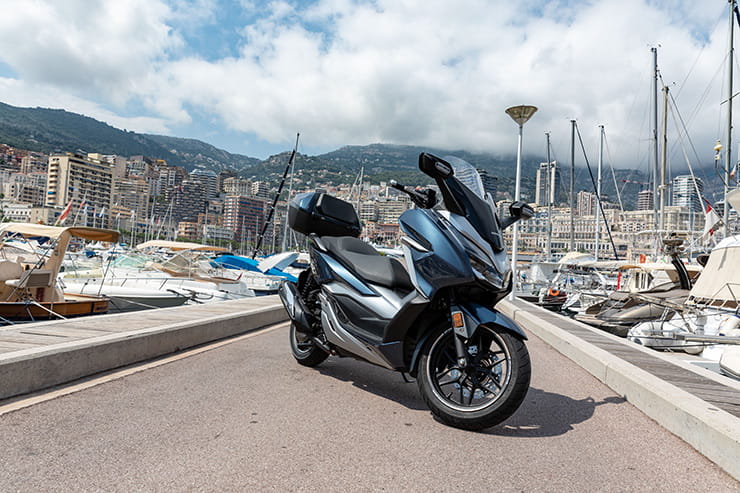 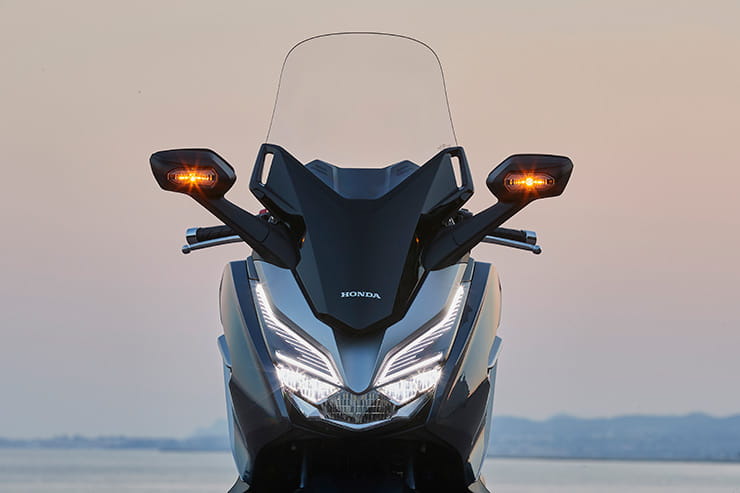 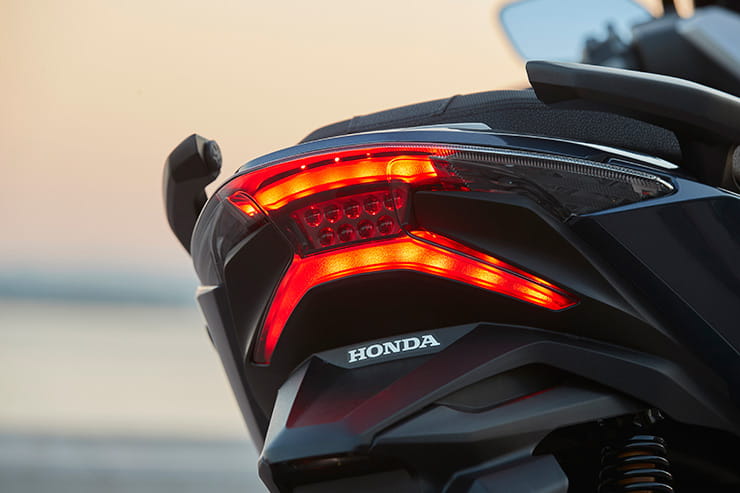 Over the outgoing 2015 model, the 2018 version has new styling, an increase in storage space, it’s a whole lot lighter (12kg to be exact) and Honda promises a more dynamic ride thanks to the dimensional changes. Things are looking good.

Compared to the 2012 model the new scoot is sleeker, sexier, more modern and a lot more upright.

The old model was a different kettle of fish and it showed in the UK sales volumes with less than 9% of all European sales in 2016 were from our island. Made in Italy and designed for the European market alone, the Forza 300 sits alongside competition from Piaggio, Yamaha, Kawasaki and even Kymco in this capacity category though realistically it’s only the Yamaha that has the equivalent build quality.

But Honda has high hopes for the new model with other key improvements including all-around LED lighting and a very fast electronically adjustable windscreen that moves through 140mm. A new LCD/analogue instrument panel which is still a little old fashioned by comparison to some recent efforts though familiarity for car drivers may be poignant in its design given the target audience.

For the aforementioned dynamic ride, the wheelbase is 35mm shorter and measures just 20mm longer than its new 125cc sibling. Seat high is increased by a huge 64mm to improve the riding position and visibility.

A surprising addition, which is a first for a Honda scooter, is selectable torque control which is their version of traction control. On this 279cc scooter… because you never know when 25bhp might get you into trouble! OK, all jokes aside, a 14” rear tyre and a slippery surface could easily have you off so the HSTC to give it its full acronym detects any difference in front and rear wheel speeds and calculates the slip ratio before controlling the engine torque via the fuel injection. In the blink of an eye. The system can be switched off while stationary but turn the ignition off and the system will reset to its on setting. 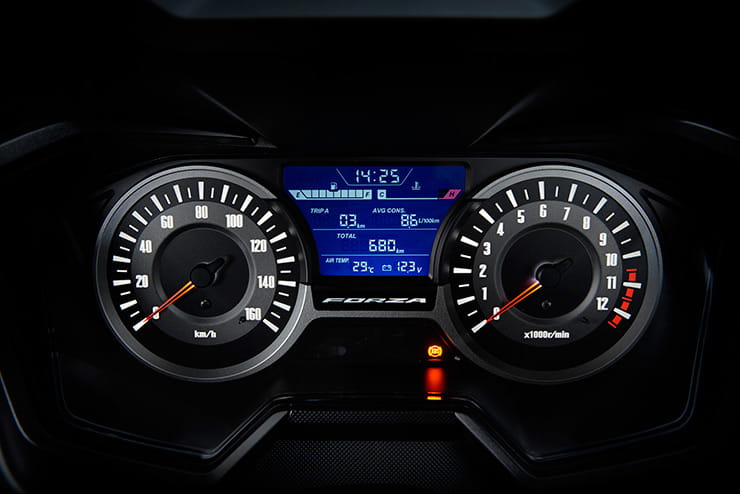 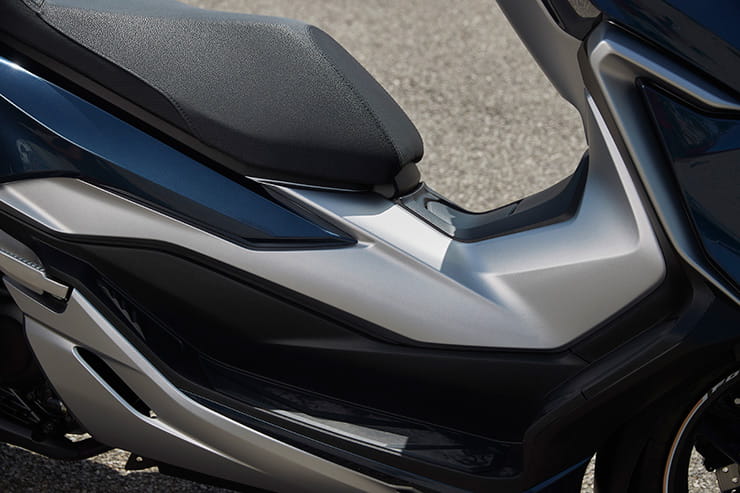 Entertainingly, during the press presentation Honda gave us the Forza 300’s V-max figure, or ‘top speed’ if you prefer; 129 km/h (80mph) is the manufacturer’s claim although on one stretch of motorway heading from Monte Carlo to Nice a fellow journalist with a GPS app clocked 88.5mph. So, the scooter has plenty of pace and wouldn’t be uncomfortable on the motorways. And randomly another Honda fact to measure performance stood out: 0-200m takes 11.1 seconds. For comparison, Usain Bolt’s 2009 world record over the same distance is 19.19 seconds.

Power delivery is smooth and the thanks to the setting changes in the CVT (Continuously Variable Transmission) gearbox there’s a stronger focus on low to mid-range torque which, at peak of 5,750rpm measures 27.2Nm (20.1 ft-lbs). When trundling along the French Riviera at 30mph, the sharpness of the throttle reaction is enough to get you out of trouble too thanks to the gear ratios which have been deliberately set for fast low speed reaction.

The new Forza 300 shares its 279cc, liquid-cooled fuel-injected SOHC four-valve engine with the SH300i and it’s an easy motor to get on with. Simple in its feedback, predictability and drive and offering more engine braking when off the throttle that the 125 too.

A completely new tubular steel frame for the 2018 bike represents a 12kg weight saving and takes the overall wet weight down to 182kg. Its shorter wheelbase increases tighter cornering ability so even though you sit more upright in the saddle, the chassis and Michelin tyres (120/70-15 front and 140/70-14 rear – a 1” increase over the previous design) keep you firmly on the right line in the faster sweepers or uphill hairpins consisting of huge elevation right on the apex. Entertainment levels were high during a brisk press launch which naturally had us testing the grip and chassis reactions, which impressed.

Statistically, the Honda is 3kg heavier than the Yamaha XMAX 300 but with a 1.5 litre smaller fuel tank although the newer technology in the red corner would get you closer to 200 miles per tank than the Yamaha, marginally.

A single 256mm ABS-enabled disc on the front is paired with a 240mm rear although the ABS does interrupt too soon at the back – designed to alleviate any hooliganistic tendencies for deliberate skids. Oh, that and safety. The lunge on the front telescopic forks under heavy front braking is a hazard of any scooter but doesn’t interfere with rear grip when in a straight line and doesn’t detract from a comfortable ride. That is until you get to a speed bump when the twin rear shock rocks your spine. They are adjustable through a 7-stage spring preload. 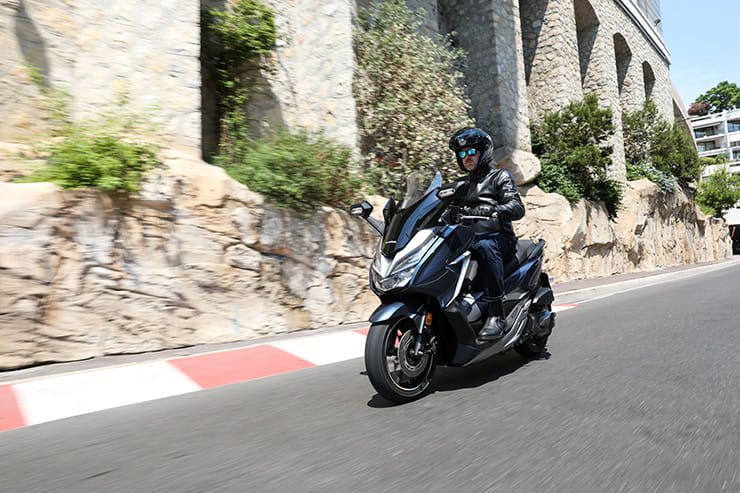 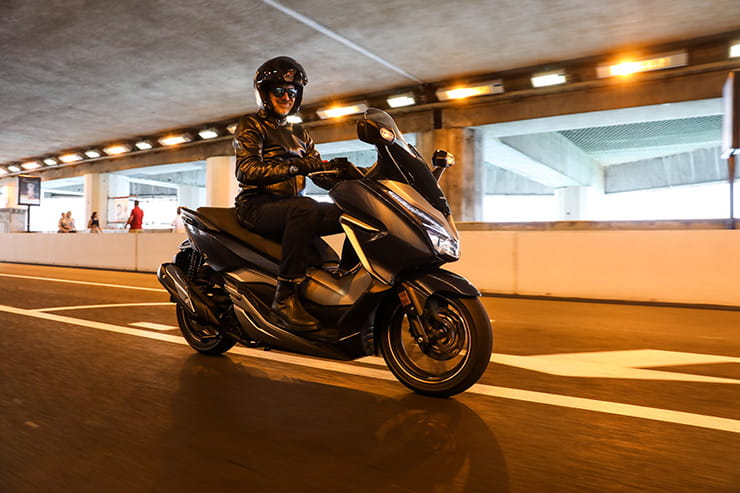 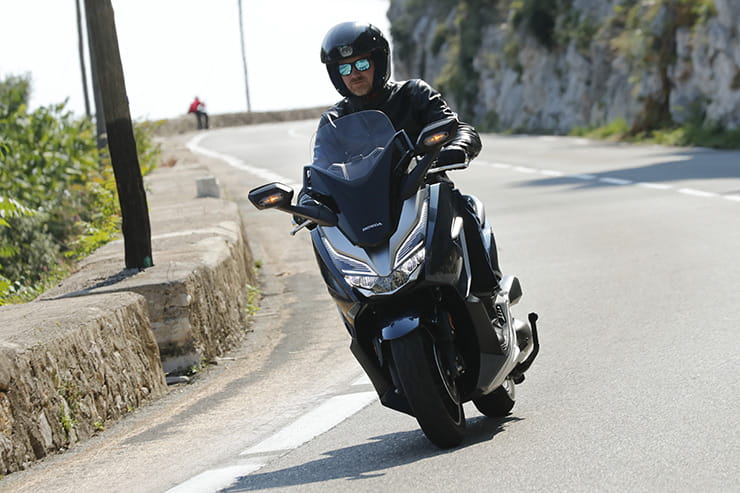 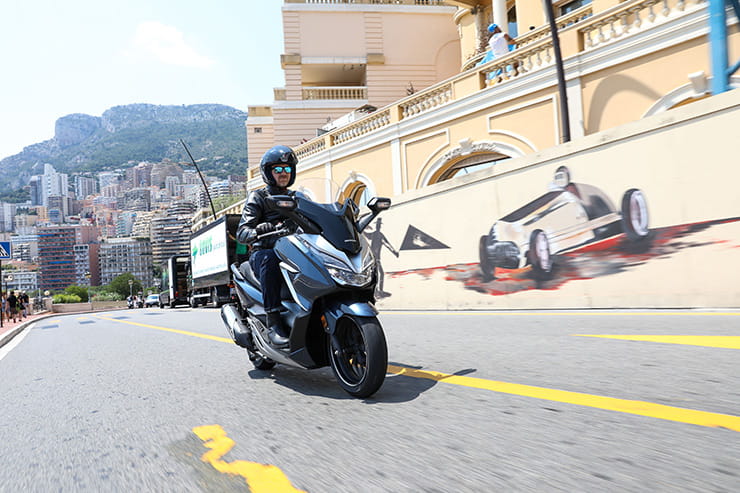 Despite being a 300cc scooter, dimensionally it’s identical to the also new 125 albeit with a 20mm longer wheelbase so given the extra power, the larger capacity version offers sufficient power-to-weight to thunder around the switchbacks north of Monaco.

The 780mm high seat is wide too offering a plush ride assisted by the step in the one-piece seat between rider and pillion which is ideal to shunt up against.

There’s not masses of leg room if you’re closer to the clouds than 6-feet. I was comfortable enough even with my feet in the forward position not to worry too much and I certainly made it look like a 125cc. If you stand taller than 6-feet then I’d consider it when on a test ride. Whether crouching forward behind the screen or lounging in a more relaxed style, the bars and instruments are easy to access and operate. There’re not particularly new-age and the Info A and Info B buttons on the left-side don’t shout ‘impressive quality’ and ‘this was well thought-out’.

For daily life, it’s among the ideal choices for city commuting and general whizzing about with ease but it could and should also be considered for longer trips given the comfort and built-in luggage. Its ace card is its versatility and, if you select the best looking colour, which has to be the grey, then I’d happily describe as sporty-chic.

I may ask Honda if I can borrow one for the winter because I know I won’t be disappointed… until I realise that heated grips are an optional extra.

Three things I loved about the Honda Forza 300 …

• Not masses of room for a taller rider 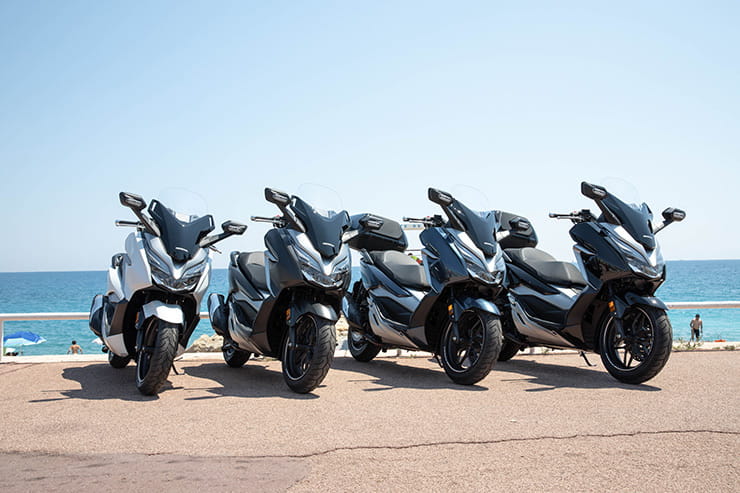