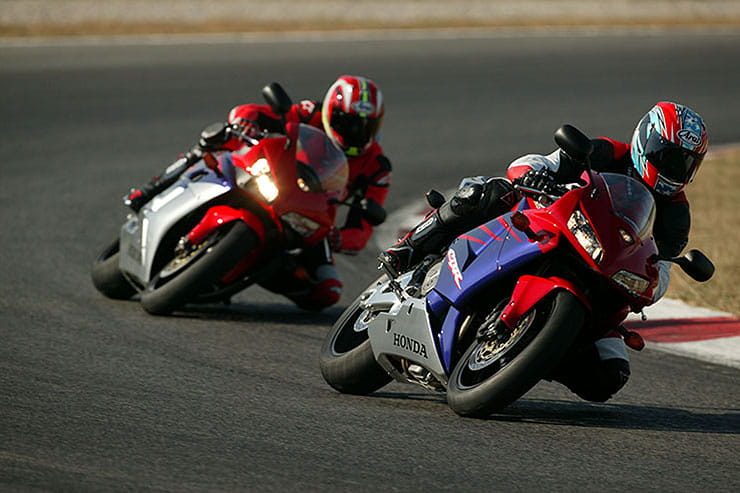 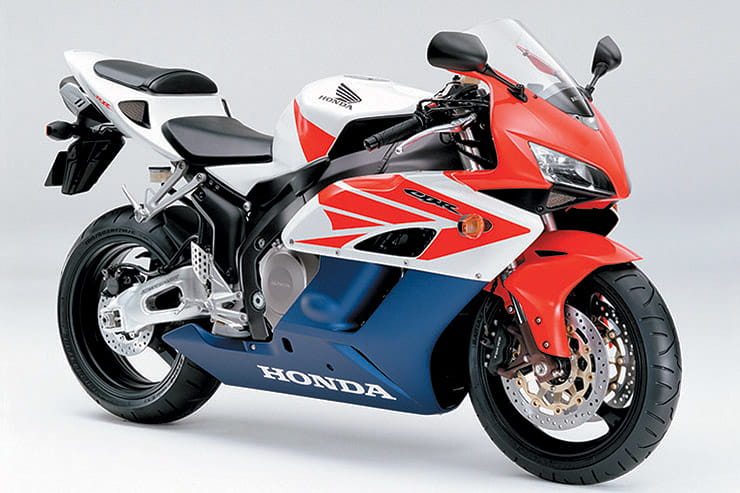 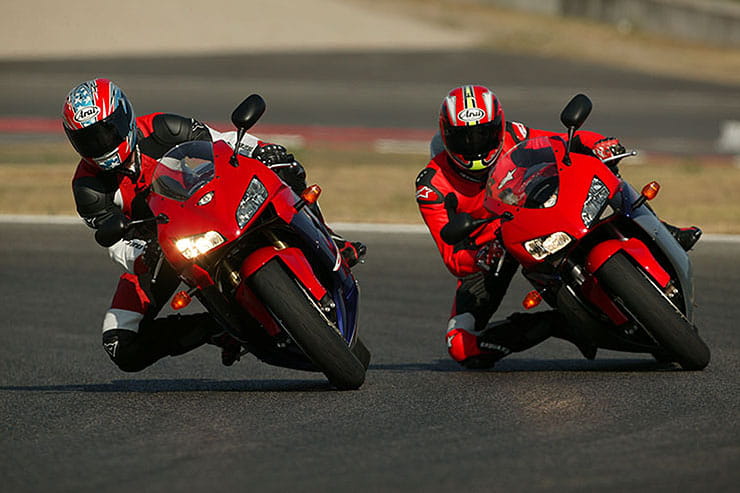 While 2003 was the year of the supersport bike, in 2004 the litre bike class hit back and hit back hard. Not only did Yamaha launch an all-new YZF-R1, Kawasaki unleashed the fearsome Ninja ZX-10R and Honda got in on the act with their first litre Fireblade model (note the lack of capital ‘B’ in the name...) – the CBR1000RR. Heavily inspired by the firm’s dominant RC211V MotoGP bike a certain Mr Rossi was dominating on, the new Blade had everything the old model lacked and as well as a funky underseat pipe and all-new litre motor, boasted a MotoGP-style swingarm, electronic steering damper, inverted forks, radial brakes, a new frame and a sharp look. A Blade for the next generation had arrived and it was really rather good, although sadly also left lacking in a few critical areas...

In 2004 the Blade cost £8799, which was fairly good value for money as the Ninja was £9045, GSX-R £8549 and R1 £9399 – oh how we miss those days! Nowadays you will need to fork out roughly £3000 for a tatty high-mileage example with £4000 a more realistic price tag to get a good first generation model. If you want the updated 2006/7 bike (look at the fairing, the first gen has a straight line split in the middle of the side fairing, the updated model doesn’t) you need to up this to £4800 for a nice one and £5500 for a minter. There isn’t a great deal of difference in price between a first and second generation bike if they are showing high mileages, so if a bit of wear doesn’t bother you, picking up a second gen for less than £4500 is certainly possible. 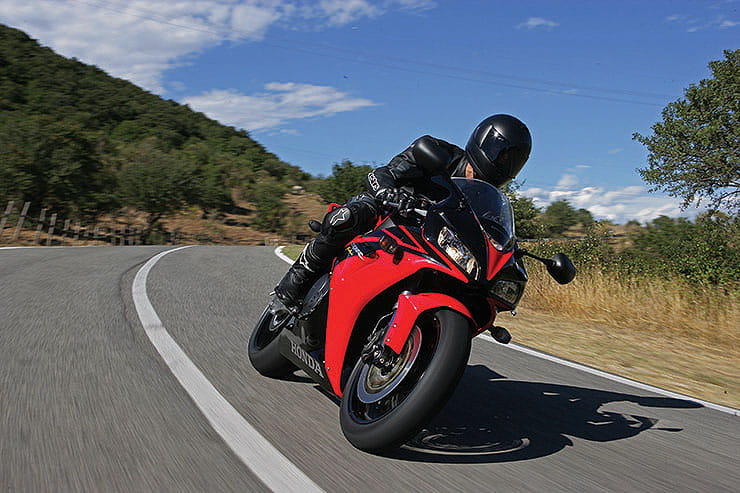 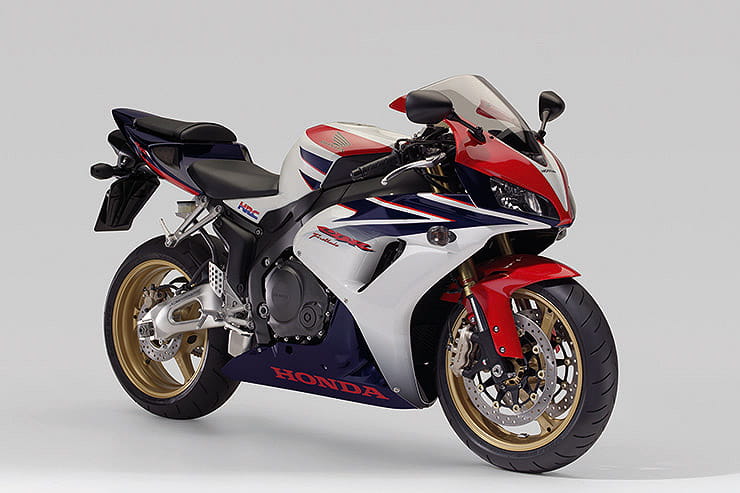 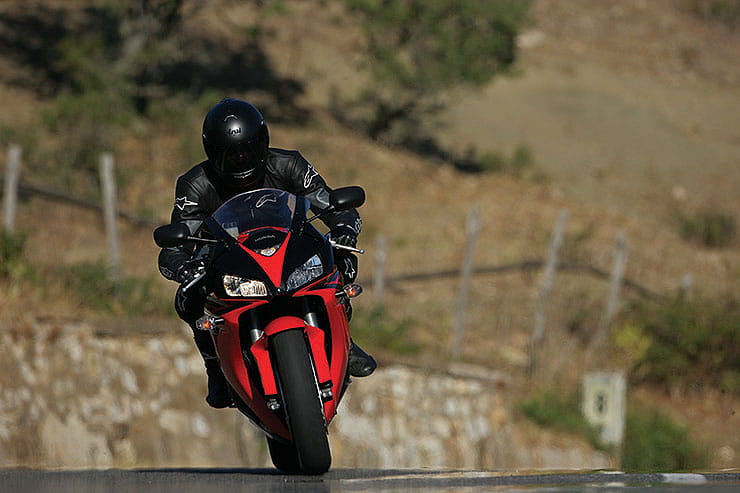 With a claimed 170bhp and 84.8ft.lb of torque on offer, the all-new litre capacity Blade motor should have wowed the world, but oddly enough in 2004 it didn’t. The issue the Blade had was that Honda played it quite safe, giving it a relaxed power delivery that next to the Ninja made it feel a bit lacklustre. There isn’t really the ferocity in its acceleration you would expect from a litre sportsbike and while a lovely road motor, it was left desperately needing a bit of zing to help it stand out. Honda quite quickly spotted this issue and the updated bike features a larger 42-tooth rear sprocket where the original bike has a 40-tooth item, bringing with it a lot more urgency to the acceleration (a few small engine upgrades also help) and giving the bike a much needed boost of character. If you buy an original generation, swap the rear sprocket and you will instantly find the bike more engaging to ride.

Honda cut no corners with their new 998cc motor and while it has the same bore as the old 954 Blade, that’s about the only similarities. A totally new powerplant, the engine features a cassette gearbox, slipper pistons, twin injectors and lots more besides – although not a slipper clutch. In terms of reliability, it is a very solid motor and there are almost no instances of it throwing up any major mechanical woes, which is good news. The bad news is that there are quite a few reports of generators and reg/recs giving up, which will cost you about £250 to get sorted so when buying used, check everything is well by testing the battery terminals using a voltmeter and seeing if it is recording over 12v (usually around 14v) with the engine running. The gearbox is also solid but the exhaust system runs into the usual issues involving a seized H-VIX exhaust valve. It is located under the seat so check the cables are turning it and it isn’t locked solid. You can wire it open or bypass it but then you need to also bypass the warning on the dash. A lot of owners fit an aftermarket exhaust to the Blade (generally just an end can, the headers are actually very good), which isn’t a bad thing as the OE unit is quite heavy, but it is always best to get the bike remapped or a fuelling module fitted if this is done to ensure it doesn’t run weak. There occasional reports of sensors failing so always be wary of any fault codes on the dash. 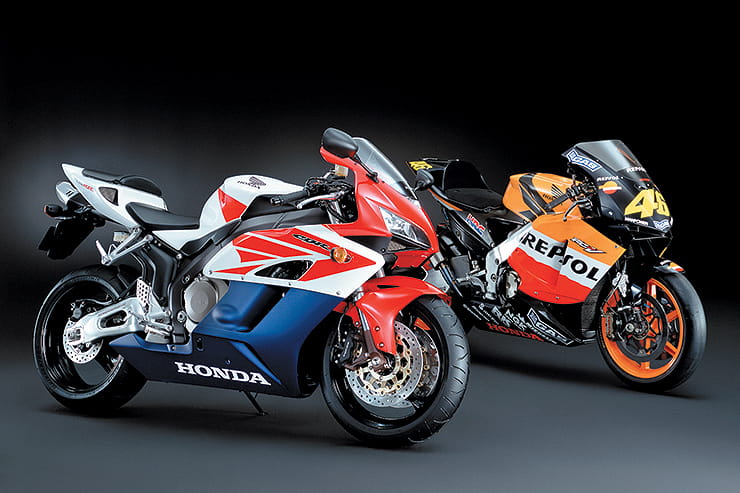 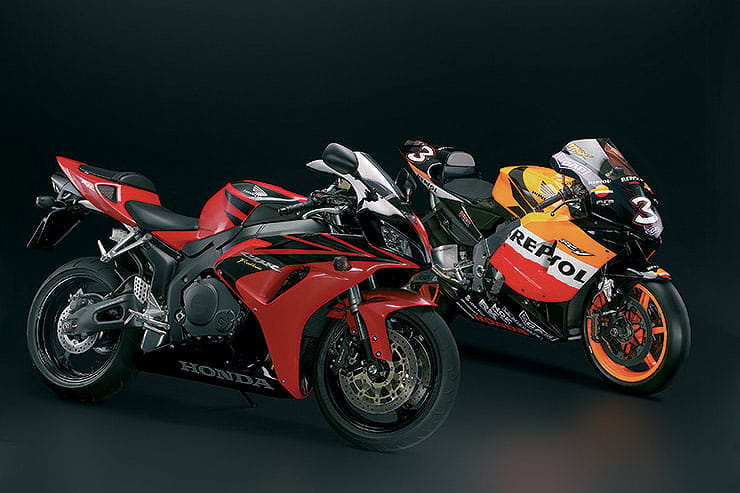 The Blade is pretty easy on the fuel (for a sportsbike...) and you can expect to see about 125 miles before the fuel warning light (no gauge...) comes on and record mid-30mpg figures. That’s not horrific and many owners improve upon this if they are doing more straight line motoring.

Using technology gained from the firm’s MotoGP project, the Blade features an all-new chassis and also a Unit Pro-Link swingarm as well as a very flashy electronic steering damper, which is plonked right up in front of the rider on the top yoke. To ride the Blade is typically refined and is one of those bikes that feels so assured and stuck to the road’s surface you feel it is almost uncrashable (it is crashable, by the way). It’s not as agile as some rival machines, which was another of its failings, but it is just beautiful to ride and where the Ninja will kick and protest if the road’s surface is bumpy, the Blade will just keep motoring on with no hint of instability. Balanced, refined and very neutral, the Blade is a brilliant handling bike if you want to enjoy the ride and not be scared senseless. But again, it isn’t perfect. When buying used, the chances are the suspension will be ok but always inspect the fork seals for leaks and also give the finish a thorough inspection as the paint is quite thin on the tank and easily marks where the rider’s knees touch it.

The four-piston radial brakes do leave a bit to be desired on the first generation and they lack the bite you expect from a sportsbike. The second generation’s brakes are much better, so always factor in a set of braided lines (if not already fitted) and some high friction pads if you like to have a bit of bite at the stoppers. ABS was never an option. 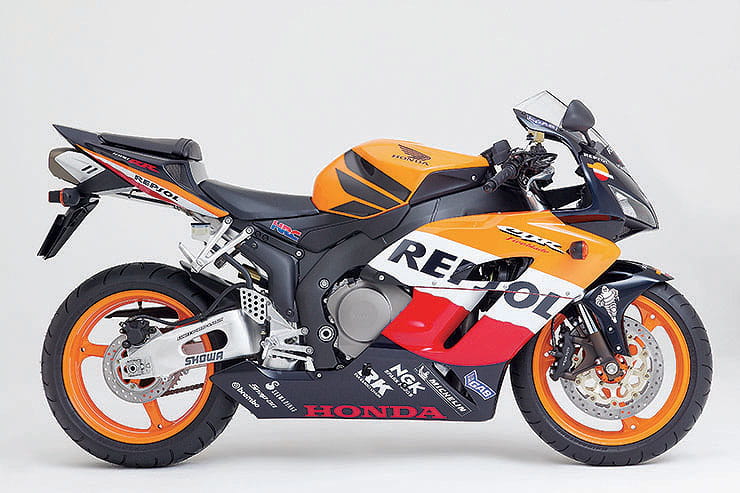 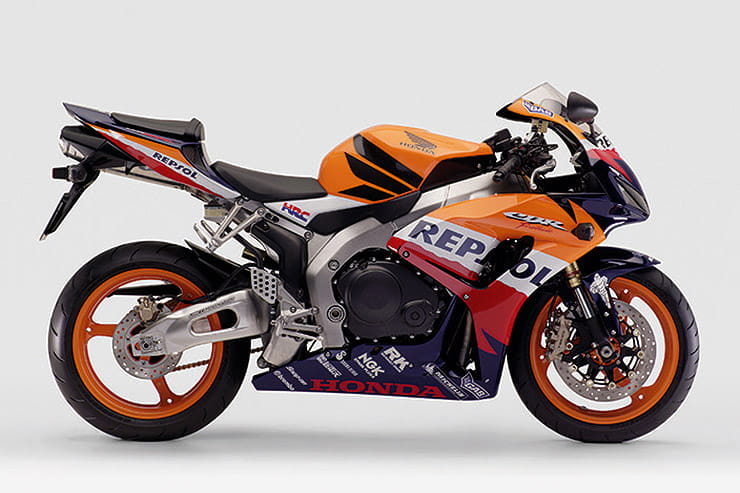 Above: both models with their Repsol clothing on

The Blade is a sportsbike but Honda’s designers have remained true to the ethos that a sportsbike should also make a good road bike and while the Blade lacks much underseat storage (this was always a pleasing thing to discover under the older model’s pillion seat) it is actually quite comfortable for distance work. The screen is a bit low but the pegs and clip-ons aren’t too aggressive and for a sportsbike it isn’t bad, meaning you can certainly ride it without willing the fuel tank to run dry after 50 miles...

There are no rider assists on the Blade aside from the electronic steering damper, which is very robust and seldom fails. The dash has programmable shift lights but no fuel gauge and your only worry there is the occasional report of the rubber covers on the buttons perishing, which will let water into the dash with fairly disastrous consequences. In terms of accessories, it is the usual sportsbike bolt-ons such as tail tidies, exhaust end cans, wheel rim tape, taller screens and the very occasional rear-sets. In general, Blades don’t get heavily modified so be wary of any that have been and also watch out for non-OE paint schemes. There was an official Repsol rep but not all are official so check well as generally a new fairing equals a crashed bike.

The underseat pipe Fireblade is quite an overlooked model and when you consider it was only built for four years before it was replaced by the ‘stubby nose’ generation, it is also fairly exclusive. The first generation is, arguably, the most disappointing as it looks a bit dull and its performance is lacklustre – however this is fairly easy to cure. The second generation is ready to go from the off and it has to be said, makes for an excellent road sportsbike. If you can, aim for the second generation, unless you like the look of the first gen and don’t mind updating it slightly through a new set of sprockets, uprated brakes and ECU re-map. If you are after a litre sportsbike that will excite but not scare you, try and underseat pipe Blade out for size, they are a typical Honda product – refined, reliable, well-built – and maybe a bit lacking in character...

Three things we love about the '04 'Blade… 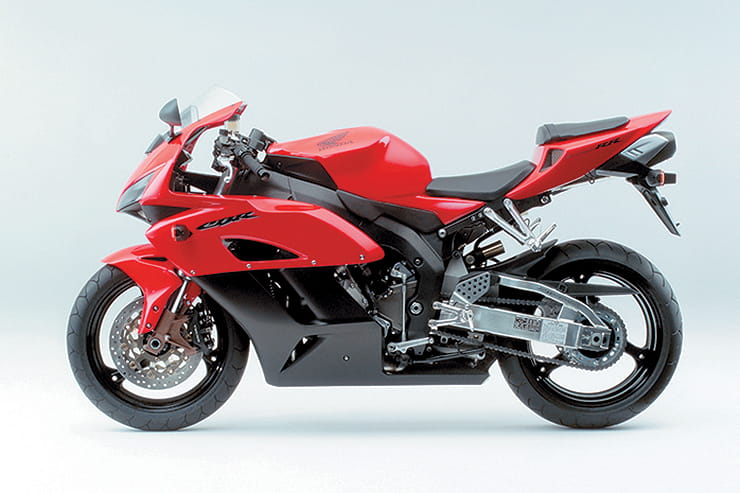 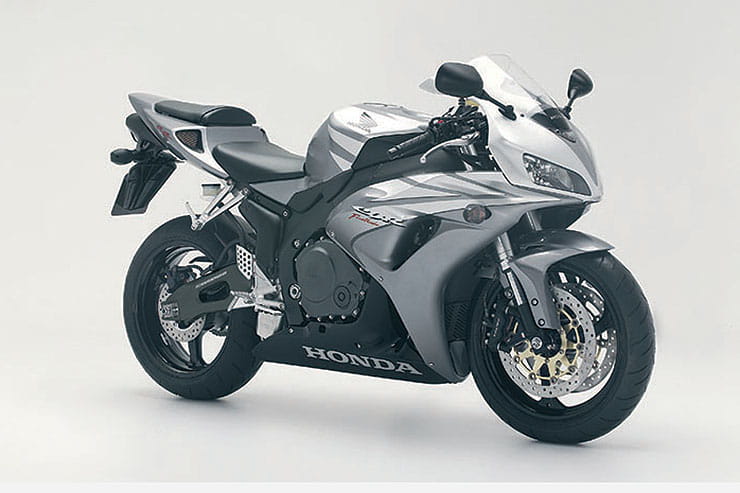