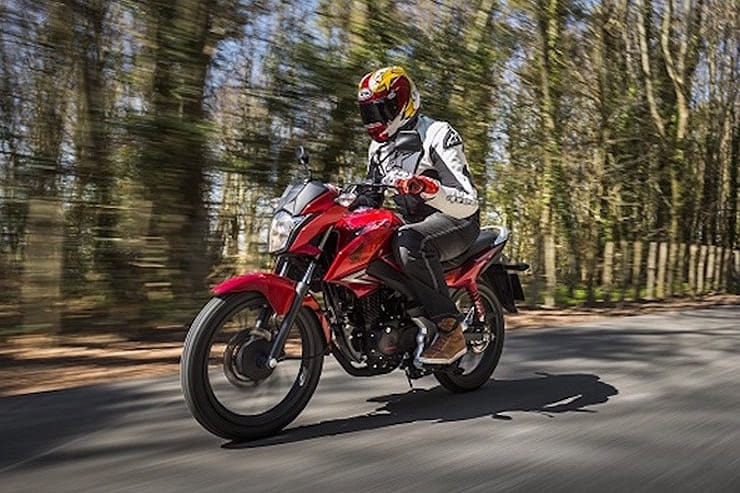 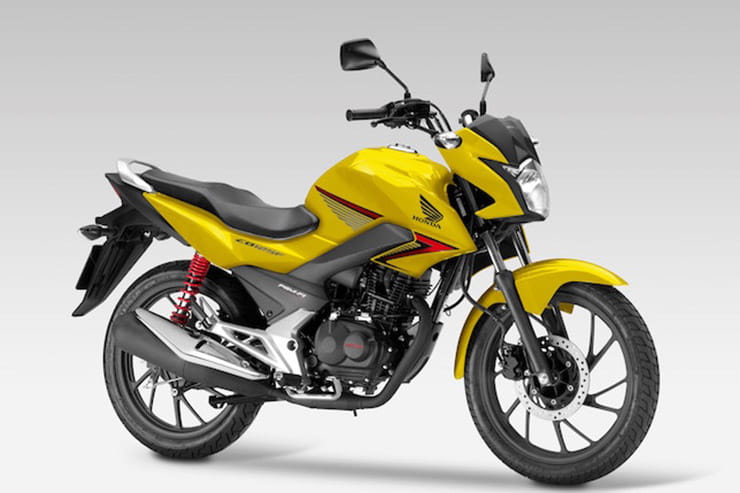 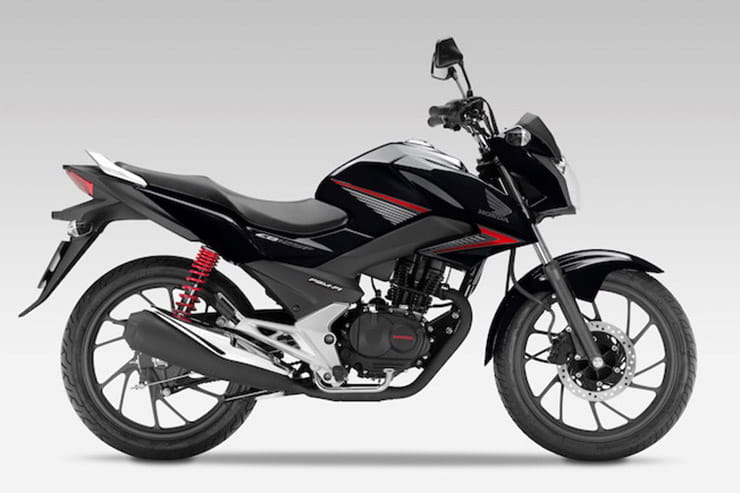 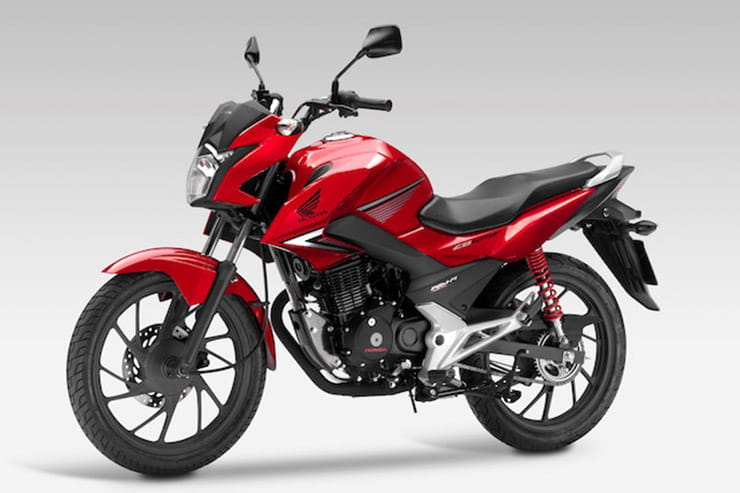 Honda has a long, respected history of producing workmanlike, affordable, economical and rugged commuter four-stroke single-cylinder 125s dating back to the CG126 in the 1970s and the CB125F was its 2015 incarnation.

Compared to the half-faired CBF, the unfaired CB125F featured a new frame, new wheels in the style of bigger Honda bikes, improved fuel injection, increased mpg to a claimed 145 miles per gallon, new clocks including a gear indicator and styling that mimics the bigger CBs in the Honda range – the CB650 and CB500F. There’s also red pre-load adjustable rear shocks with red springs, a black engine and a red Honda badge.

As a result, it looks much sharper than the old bike, is more economical, production has shifted from India to China (although Honda insist quality has improved) and it’s actually cheaper than the old model, too.

For 2021 the CB125F was significantly updated again with a revised engine, styling and more.

The CB125F’s huge popularity also means that used values remain strong. The cheapest used examples rarely drop below £2000, even after five years while nearly new machines are barely less than brand new ones.

It’s worth pointing out here that, although reliability is generally good, some owners have noticed that some of the metal and chrome finishes quickly show corrosion and rust – particularly on the black painted exhaust. It’s a good haggling point when viewing a used bike. 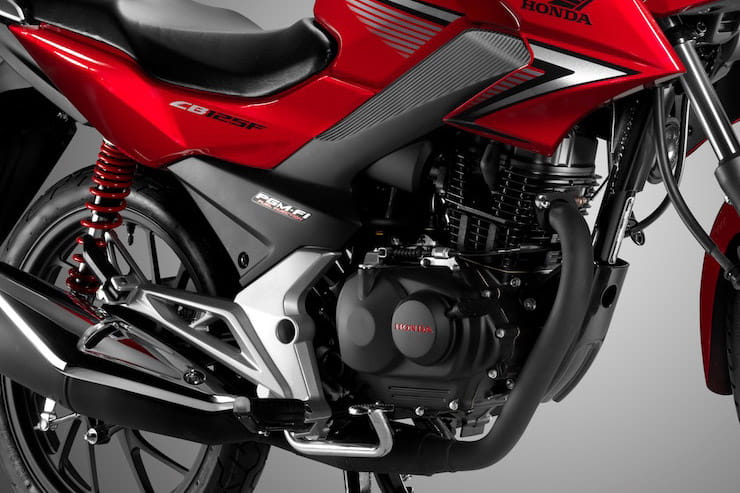 Tuned for economy and practicality rather than performance, the CB125F produces an underwhelming but adequate 10.4bhp and 7.5ft-lbs of torque.

Even so, the acceleration is strong enough to keep pace with traffic and could carry even this six foot four, overweight rider to a cruising speed of 60mph, with the bike's top speed being roughly 70mph.

It’s more comfortable however around town, which is what’s it’s mostly intended for, with nice fuelling and smooth power delivery all the way to the 10,000rpm redline.

The subtly revised, fuel-injected, air-cooled SOHC four-stroke single is essentially that of the previous CBF125, comes equipped with a balancer shaft for extra smoothness and is generally reliable, economical and under-stressed. The single-cylinder motor sounds harsh when revved hard and the five-speed gearbox is slightly clunky, especially when new, although the bike I rode had only done a couple of hundred miles so will loosen up. The clutch, however, is incredibly light, one finger is all you need if you’re experienced, and the exhaust note muted and civilised although, as mentioned elsewhere, its black paint finish isn‘t the best and is susceptible to rust. 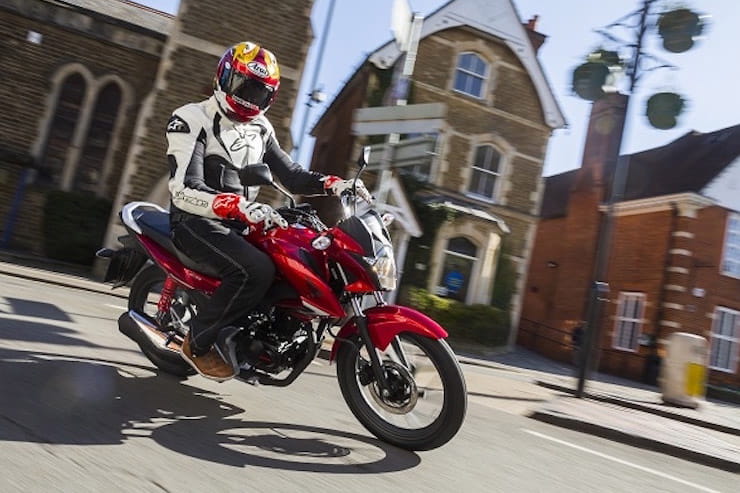 This is where the CB really comes into its own. Admittedly I rode the bike incredibly hard on the test, but it seemed to run on air. The fuel gauge had barely moved at the end of the day and a quick gloves-off calculation shows it did 110mpg over the day of being thrashed. That is amazing. Honda’s 145mpg claim should be true with more regular riding and even though the tank holds only 13 litres, well over 300 miles should be possible before requiring a refill.

The CB125F is a lightweight, novice-friendly commuter, not a sports bike, so it should be judged as such. At 128kg wet (compared to Honda’s Forza 125 scooter at 158kg wet), the CB125F is a featherweight. It’s also dinky and easily manageable, even though it is actually physically wider to look at than the old bike and longer so is more stable at speed and big enough to hold its own presence.

As you might imagine everything is incredibly easy to use. There’s more steering lock than the old bike so feet-up U-turns are easy even for a new rider. It’s very easy to slot across town and feel confident pitching it into roundabouts. Although the tyres seem incredibly narrow if you’re used to bigger bikes, they work fine, and the suspension is damped well enough for more spirited riding and does an okay job of potholes. 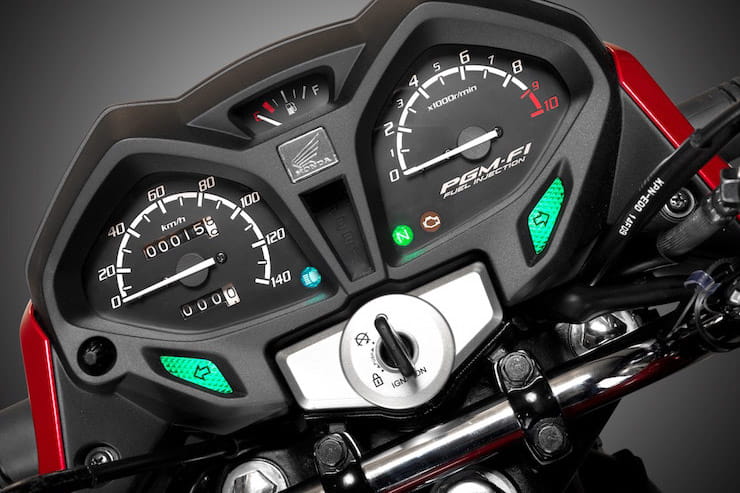 The brakes on the CB125F may be fairly basic and unspectacular, being merely a single, small disc at the front grasped by a twin-piston caliper with a drum at the rear, but thanks to the light Honda’s ultra light weight and meagre performance they’re more than enough. The rear drum has plenty of feel and is powerful enough to lock up the wheel and the front disc brake has plenty of power, too – but not too much to overwhelm new riders.

There’s a bit of a perception that commuter 125s aren’t fun away from town but we found the opposite to be true with the CB125F. The Honda is more than capable of longer rides, handles securely and well enough to ride confidently on twisty roads, and was comfortable over the 125 miles we rode in a day.

Admittedly, if you’re used to a bigger motorcycle it changes the way you ride a bike –because of the relative lack of grunt and top speed you have to plan ahead more, use more speed in corners to make up for the lack of acceleration on the way out of the bend. But the little CB is capable of sustained 70mph and decent, comfortable mileage. Of course, being small, underpowered and unfaired we wouldn’t recommend the CB for touring, but it is better than you might expect.

The CB125F is a simple, affordable commuter, so don’t expect any electronic rider aids or much by way of luxury. That said, it’s also a modern Honda so it is all cleverly thought out, on the whole smartly finished and has everything you actually need. Everything on this bike has been thought about for learner riders, too, so there’s no kill switch which might fool unwitting learners who can’t work out how to start the bike when the kill switch is turned off, the gear indicator is in the middle of the dash so it’s easy to read and there’s also a useful mainstand as standard.

Very limited accessories are available although commuters may consider a top box, crash bars or, if riding year-round, heated handlebar grips or even bar muffs. 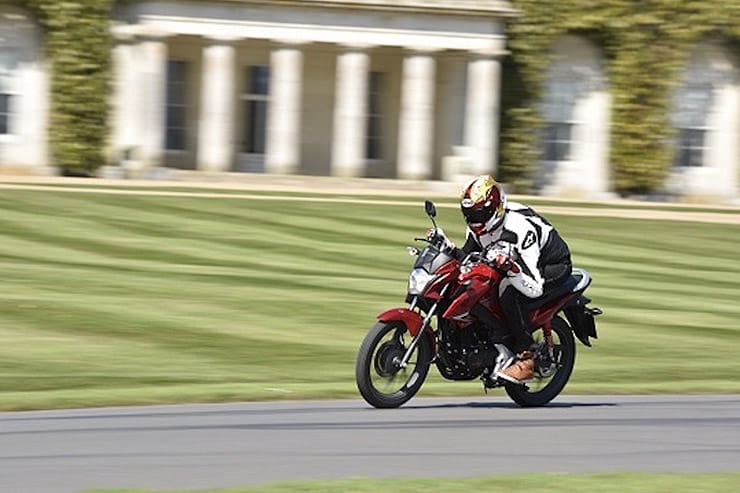 The CB125F is a no fuss, no frills, affordable and brilliantly economical commuter 125 that’s a doddle to ride and run – and it does exactly what it says on the tin. All in all it’s a brilliant value, incredibly easy to ride bike that has some incredible finance offers and is backed by Honda’s record for reliability. As a first bike as an introduction to motorcycling, or an alternative to the car for riding to work across a busy city, you really can’t go far wrong, which is why it remains so popular and why used values remain high. Yes, you do need to keep an eye on some corrosion issues but if looked after you should have little to worry about. The new version introduced in 2021 will have a lot to live up to!

Three things we love about the CB125F…