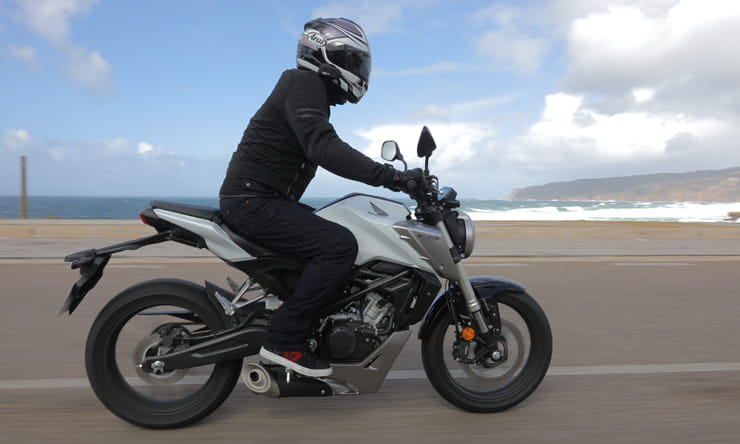 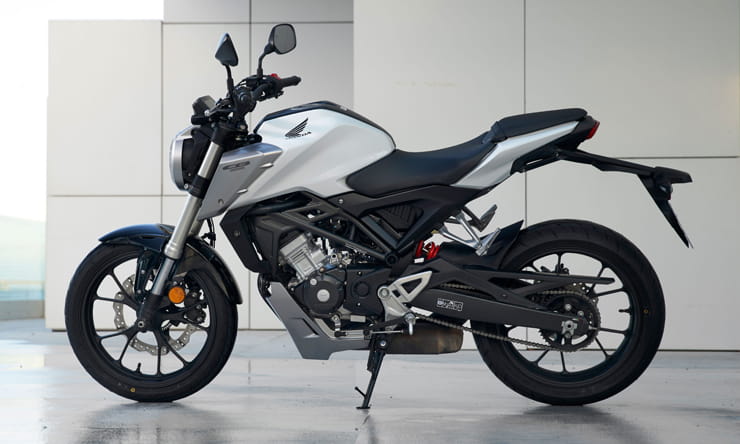 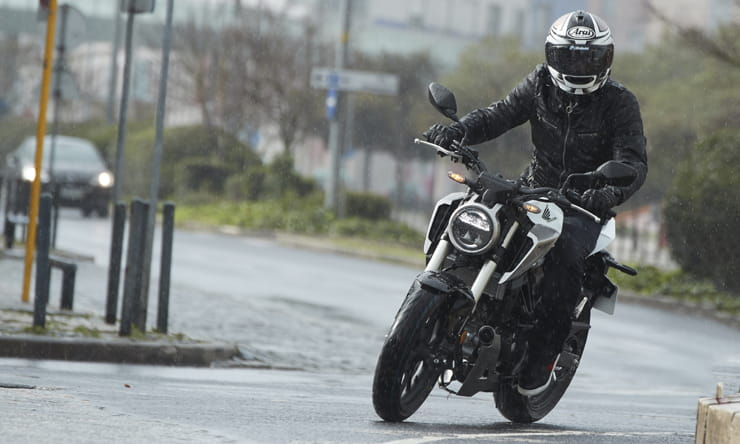 For a number of years Honda have chased the likes of KTM, Yamaha and Suzuki when it came to small capacity motorcycles for new riders. Honda made bikes such as the CB125 and more recently the CBF125 and they sold fantastically well. BikeSocial found that according to the MCIA, the Honda CBF125 was best selling UK bike in 2014. The trouble was; they never hit the red-line on the cool-o-meter in the same way as some other bikes in the class did. Well, for 2018 that all changes as Honda unleashes the coolest looking cat in the 125cc market, the CB125R. 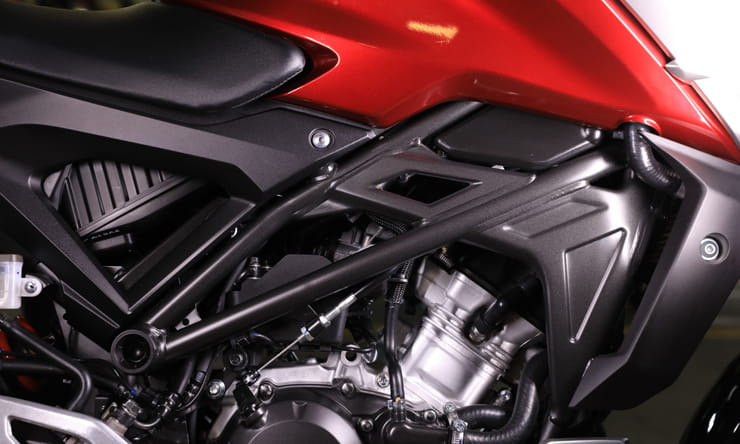 Taking its cues from its larger capacity siblings, the CB300R and CB1000R also unveiled to the world at the same time last November at the annual Milan show, the CB125R cuts a cool silhouette that’s not something we’ve seen from Honda before. It’s nowhere near as ‘look at me’ as some of the other bikes in the 125cc pond and to me looks more grown up and understated, cool. Honda describe the styling of the whole 2018 CB range as Neo Sport Café – I have no idea what that means, but I like it, a lot! 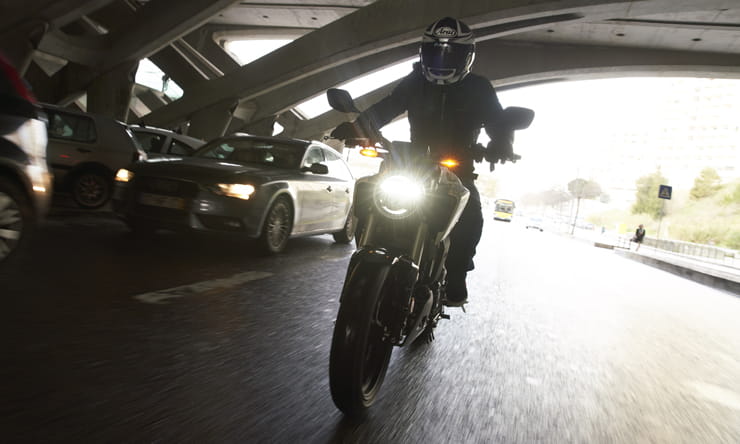 At £3949 OTR the new Thai-built Honda undercuts most of its opposition, only being beaten by Suzuki’s GSX-S125 which comes in at £3699 or £3799 for the GP replica painted version. As the bike is squarely aimed at new riders expect PCP deals to sit around the £100 per month mark. 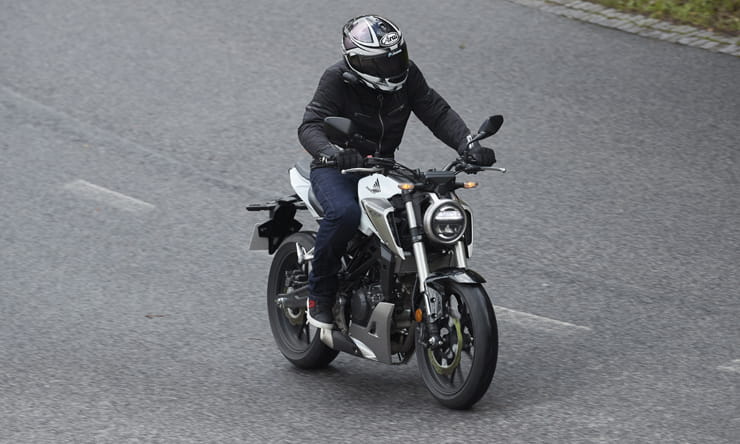 The baby CB makes 13bhp with peak power coming in at a fizzy 10,000rpm. To ride, the engine has a nice eager temperament - keep it in the sweet spot and the little single will drag you out of trouble with ease. Hit the dual-carriageway and the bike will happily cruise at motorway speeds. Many 125’s become unbearably buzzy at speed but after 20-minutes of constant cruising, I was happily surprised by how well the baby CB performed.

Peak torque is 10Nm and arrives at 8000rpm and when I read that in the specs I thought it sounded too high up the rev-range to be of any use but in fact it isn’t. The bike’s torque curve feels quite flat so although peak torque is quite high you get about the same amount of oomph all the way from 4000rpm. 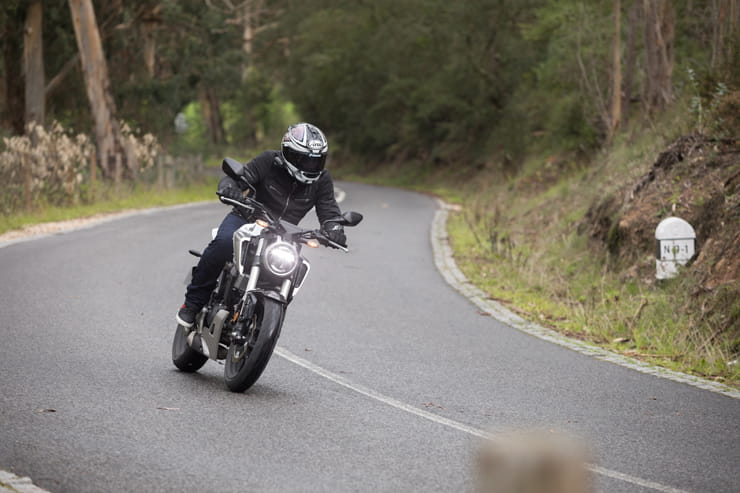 The CB125R’s engine can trace it’s roots back to the CBR125R. Since 2004 the two-valve single has thrummed in millions of bikes across the globe and I can see why Honda have used this engine; it’s light, easy to handle, needs basic maintenance and is already in the warehouse waiting to be ridden. But, I do wish that the bike could match the BHP figures of the other machines in this segment. It isn’t that the bike is lacking power but a back-to-back test between this and a 15bhp bike may show up the 13bhp Honda. The gearbox is a pleasure to use with a positive action and just enough resistance from the lever to remind you that you are moving cogs around. It’s mated to the lightest clutch I have ever used, I’ve ridden a CBR125R and cannot remember the clutch being that light. The whole drive train is direct and gives a positive and reassuring click when the next gear is engaged.

With a lot of Honda’s R&D time being spent on mass centralisation it’s no surprise to see the baby CB wear an underslung exhaust. The nicest thing about it – apart from it looking pretty cool – is that it is directly below your right ear. This means that no matter what speed you can always hear the engine which, compared to previous Honda 125s, has a nice throaty sound to it, popping I bit on the overrun when the engine gets hotter. 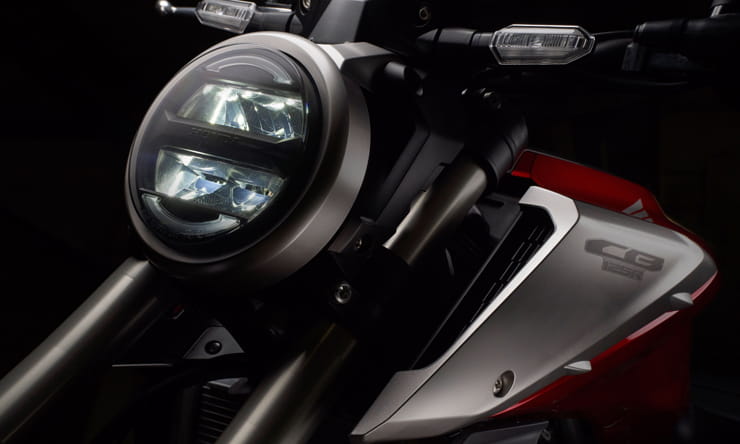 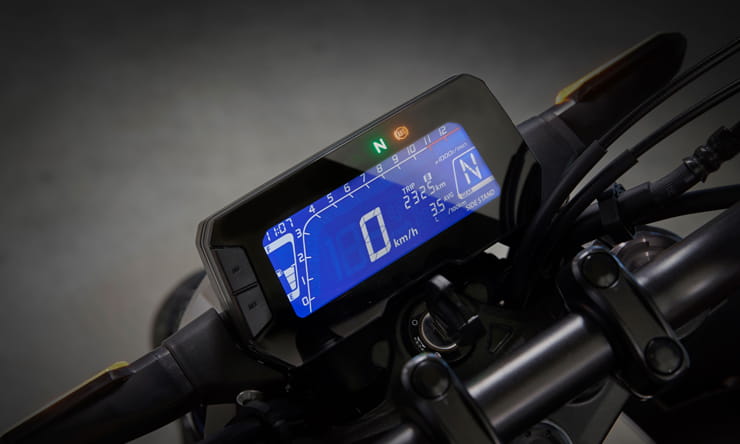 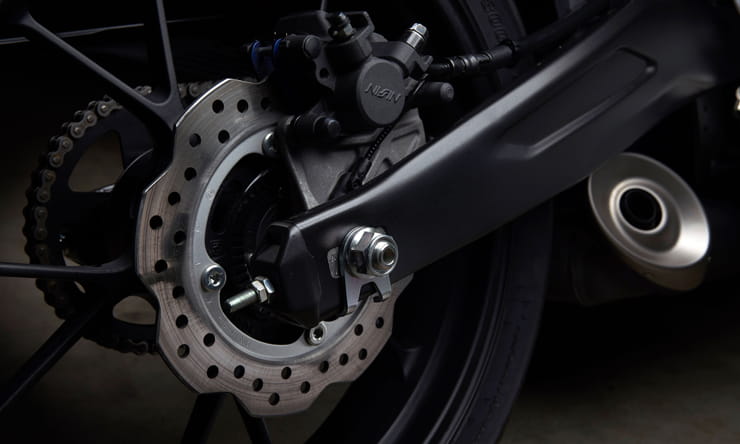 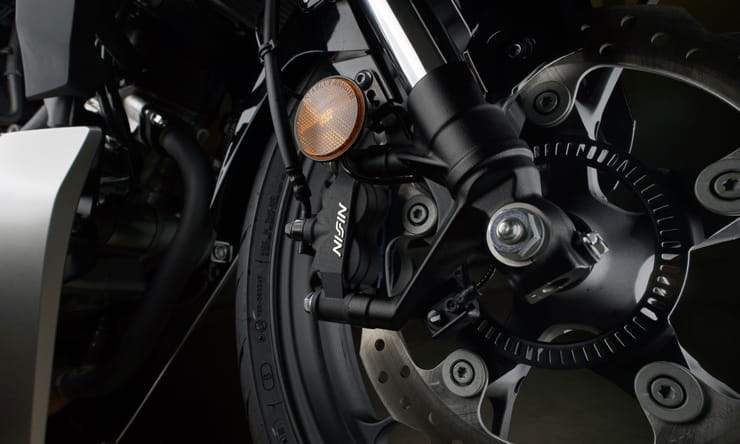 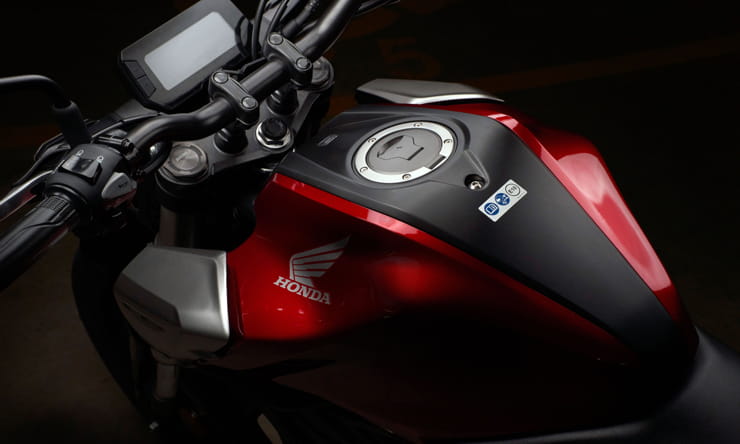 With a 10-litre tank Honda claims the CB125R has a tank range of 300 miles. How close to that you could get in the real world, I don’t know. What I can say is that during the test I saw 75mpg on the on-board computer which is good. The pace on a launch is always quick with the route back to the hotel climbing more than 2000-feet over a mountain which all takes its toll. 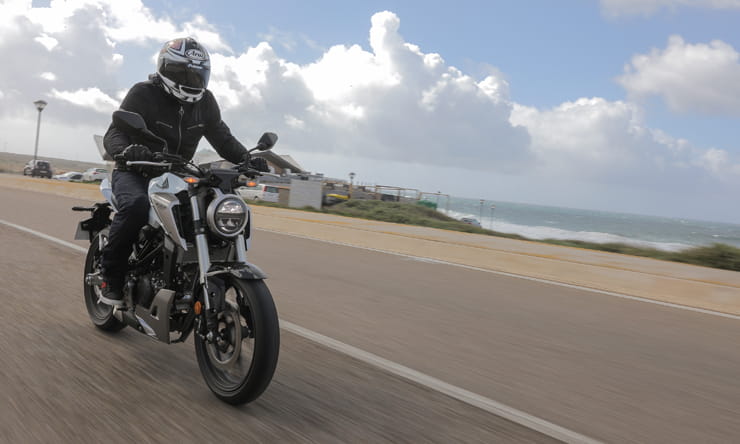 This really is the CB125R’s trump card. It’s handling is sublime. It’s ridiculously light – at 126kg ready to ride – it’s a good 15/20kg less than the rest of the pack, add to that the work the Honda boffins have put in to make that weight as central as possible, and you have a bike that’s a delight to ride around town. It flicks from hip to hip with ease thanks to its 24.2° of rake and is really eager on fast flowing stretches. The front and rear suspension on standard settings are a perfect balance of comfort round town, and composure on the open road.

A clever trick Honda have done to help the reduce weight and increase the fun is to isolate the rear suspension from the frame. The rear shock bolts directly onto a large plate that is mounted at the rear of the engine. This means the rest of the frame can be made from thinner and lighter materials. It also helps in the quest for mass centralisation and it makes a genuine difference to how the bike rides. 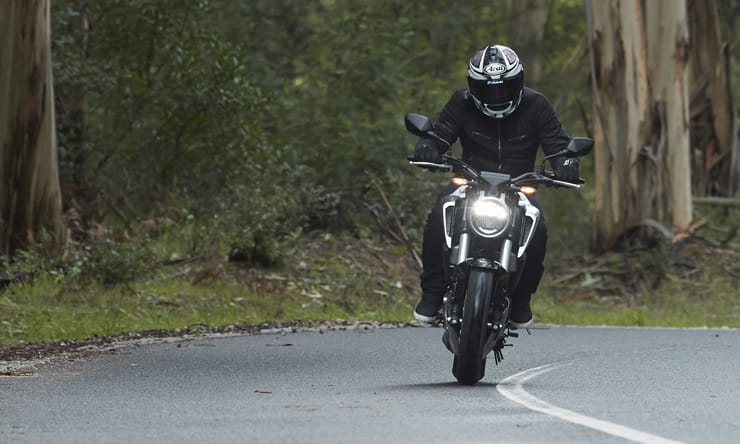 I found the front brake a tad vague, it could be that the pads are specifically designed for newer riders (where less bite and more feedback inspire more confidence) as the calipers themselves at four-piston, radially mounted Nissin items. I’d have thought they would be more than adequate for the job. The rear brake is good and plays to the target customer by giving good feedback and response with the ABS only cutting in at the last minute or if the road surface is poor. This bike is a first for Honda as it’s the only 125cc to feature a two-channel Inertial Measurement Unit (IMU). The system can detect when the rear wheel is beginning to lift when braking hard and respond, keeping the back wheel planted and the rider in control. I tried on a number of occasions to trick the system into letting me do a stoppie when the roads dried out but couldn’t – the whole IMU and ABS is a Honda system bespoke to the smaller bikes in the CB family and they work smoothly, almost in the background and aren’t as obtrusive as some other systems I have used. 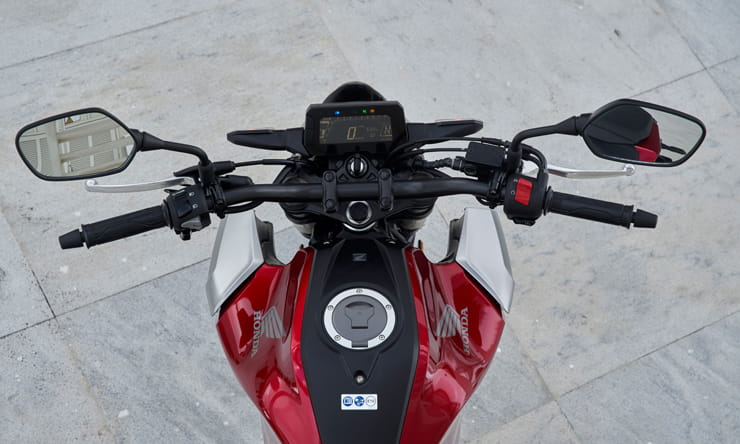 Having spent a full day in the saddle I am happy to report that the CB125R is very comfortable. I thought the seat was a little firm at first but it is actually just well designed with a sculpted shape that provides you with loads of support. You don’t slide all over the place and the pillion seat acts as a reminder of where to rest your rump. After six-hours in the saddle I had no aches or pains whatsoever and could have happily ridden on. The switch gear is all within easy reach but I don’t understand why Honda have put the horn above the indicator? I know of no other manufacturer that do it this way and it isn’t bad, it just means when you jump on for the first time you spend the first half hour beeping at people instead of indicating! Another niggle is that in the press conference there was great importance put on the bikes machined footpegs, which are lovely items and very grippy, in the real world I’d have been happier with a span adjuster on the front brake. It’s not uncomfortable to use, but if my other half was going to do her CBT, it would probably be a stretch. 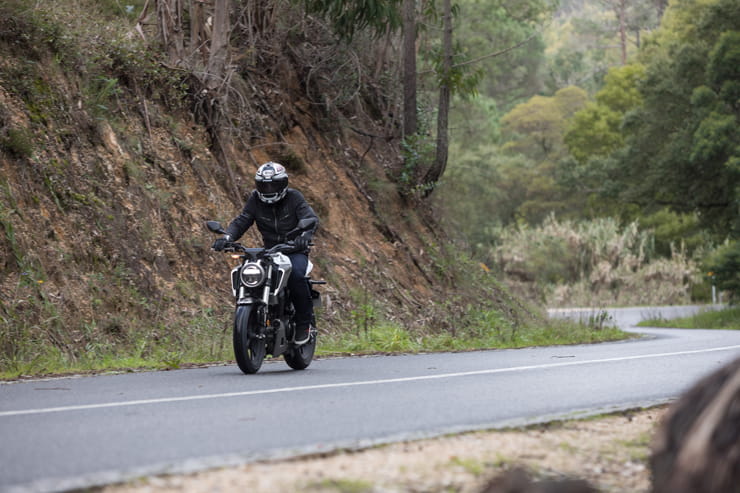 Information is displayed to you via a backlit LCD display. It’s clear and laid out well but could become difficult to read when the sun was beaming straight down on the screen. There are only two buttons needed to navigate the menus and the information relayed include speed, engine rpm, fuel level and gear position, with warning lights across the top. There is also a timer function, not GPS linked, think of it like a stopwatch. Great for trying to beat your personal best time to the chippy. 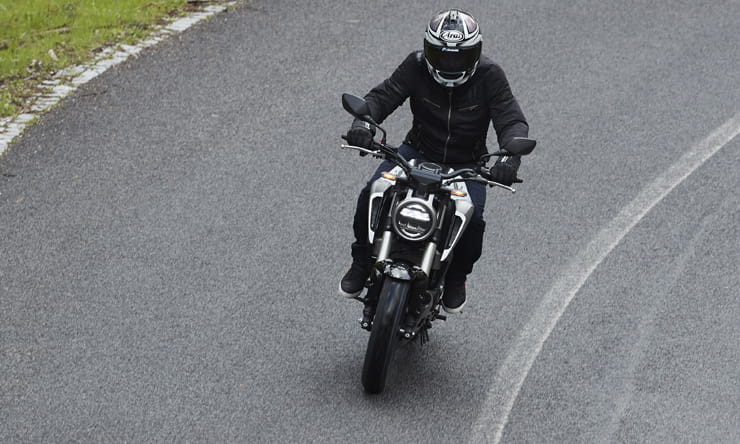 That really is the million-dollar question! I think it probably is. It ticks all the boxes that a 125 should; it’s fun, safe, affordable, looks amazing and also has a name on the tank that people trust. Do I think the Neo Sports Café styling might not be to everyone’s taste – maybe. Kids are fickle but they know what they like. Only time will tell but the styling may not be out-there or zany enough for some - although I personally think it's the best looking 125 available.

What I can say is that this is an extremely easy bike to get along with. Honda set out to build a bike that will introduce young riders to their brand, hoping that they will then trade their way up the ladder as their licence opens up to bigger bikes. In that respect CB125R hits the spot. 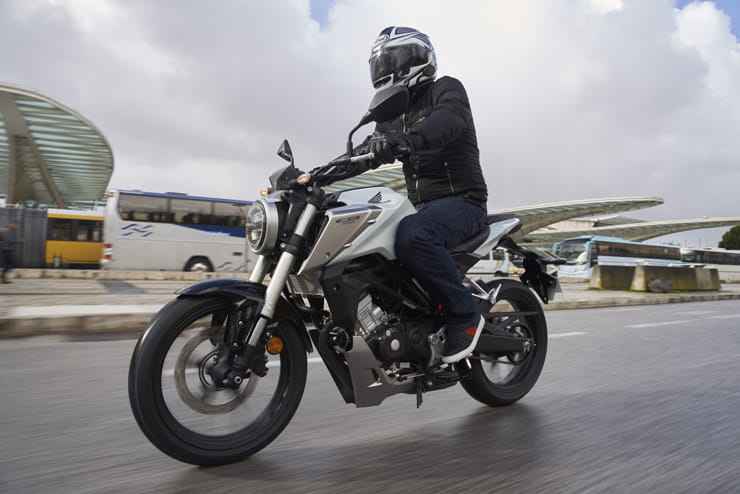 Five things I loved about the Honda CB125R…

• The accessibility of the package

• 2-bhp down on the competition 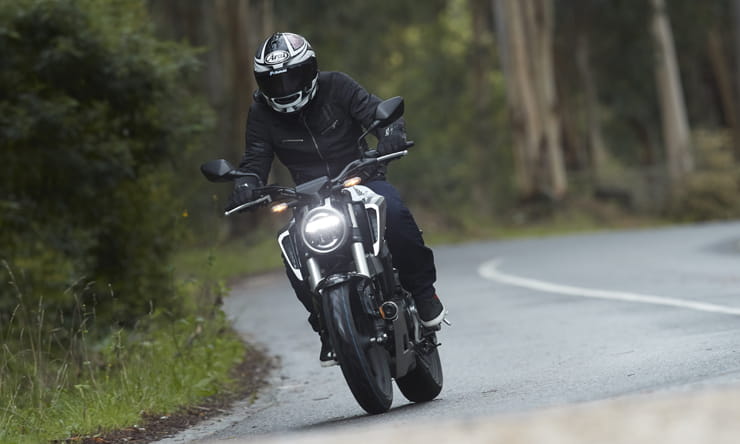 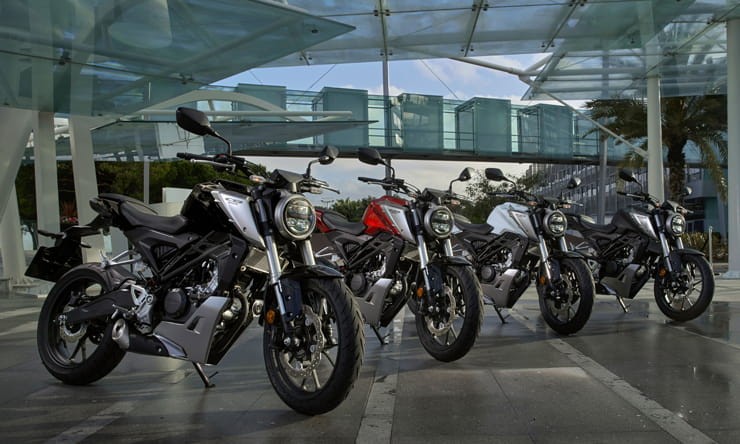