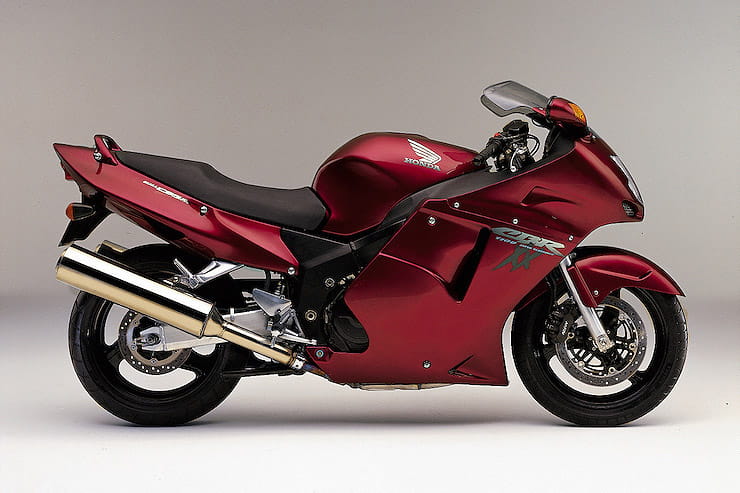 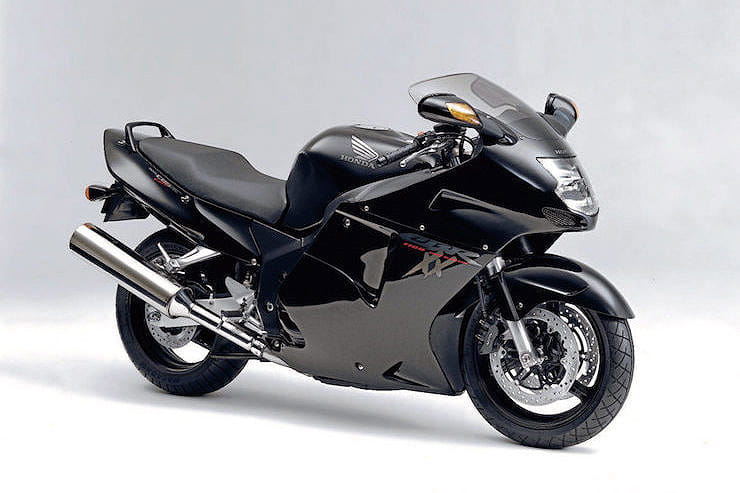 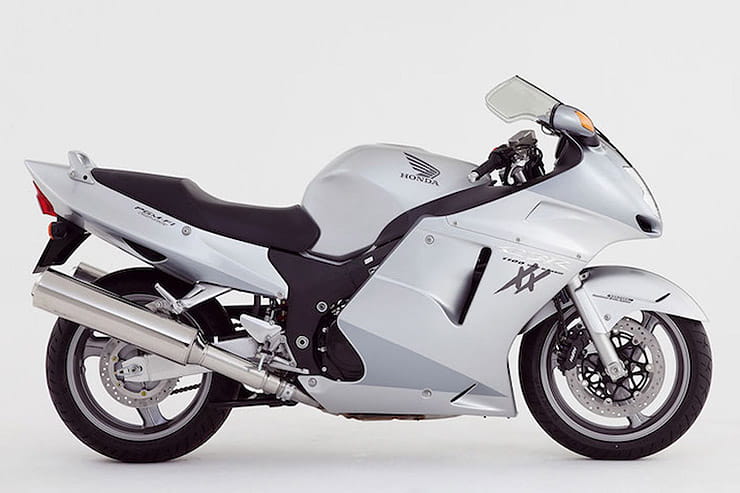 Launched in 1996 and named after the Cold War’s fastest spy plane (the Lockheed SR-71 Blackbird, Honda even photographed the bike next to the plane in its brochures), the Blackbird was a bold move by Honda from an era when speed was something to shout about.

The Blackbird was a bike whose purpose was to transport a rider (and pillion if required) across vast distances in comfort while doing stratospheric speeds. Something it accomplished, in typical Honda fashion, with an incredible amount of style and sophistication. To prove the point, the Blackbird had its world press launch at Paul Ricard, famous for its then Mistral Straight, the longest in bike sport. Honda’s new hyperbike duly dethroned Kawasaki’s ZZ-R1100 as the king of speed, a title it retained until Suzuki’s Hayabusa came along in 1999, after which the Japanese marques had a gentlemen’s agreement, restricting speed to 300kph (186.4mph).

However, the Blackbird was also much more than just the king of speed. Can you really build a bike with a genuine 170mph+ top speed that doesn’t feel like a total hooligan? Honda managed it. The Blackbird is also comfortable, classy, durable and hugely reliable – so much so, in fact, that, after an update in 1999, which brought fuel injection, a larger fuel tank and built-in immobiliser, then a final tweak in 2001 which added a catalytic converter, updated dash and slightly taller screen, Honda actually gave up plans to update the bike entirely. The belated VFR1200F in 2010 was never as well regarded and proved short-lived, being deleted, unloved, in 2015. The Blackbird, however, is respected, rated and still relevant to this day with good used examples still in demand.

If you are looking for a used Blackbird you might be slightly surprised to see machines that are over fifteen years old still commanding prices in the region of £2500. This is actually a good thing as it shows how strong the used market is for the bike. Generally Blackbirds are still in strong demand and as a result hold their values extremely well. Good, low mileage, later examples, meanwhile, still fetch approaching £4000. But whichever model you plump for, any Blackbird with an MOT will fetch £2500, irrespective of mileage, so you can buy one, enjoy it for a few years, and realistically expect to get back what you paid for it. You can’t say fairer than that. 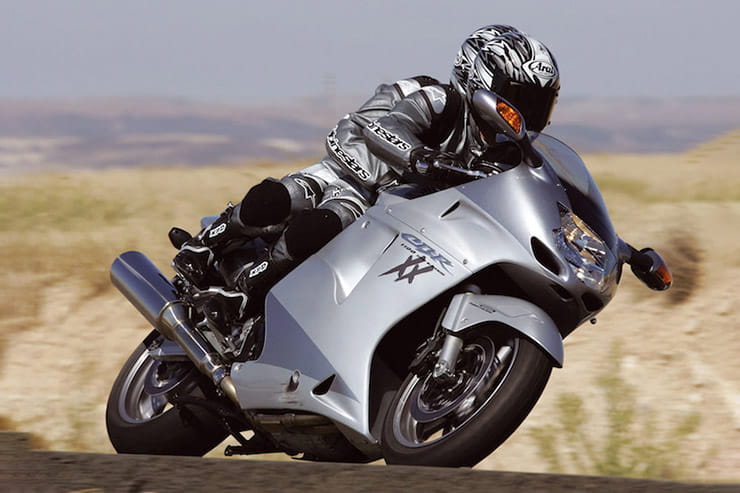 In its day, the Blackbird delivered a quantum leap in terms of hyperbike performance and speed. Kawasaki’s 147bhp ZZ-R1100 had been the reigning speed king for six long years from 1990 when the Blackbird came out and Honda exploited that period ruthlessly. With a whopping 164bhp Honda’s new rival wasn’t just more powerful than the ZZ-R it blew it away with almost 20 more horsepower. That, allied to its ground-breaking aerodynamics, was why the Honda was significantly faster overall.

Just as impressive, however, is the fact that power isn’t all a top end rush. The Blackbird also has a vast spread of torque that makes single or two-up touring a very relaxed affair while it’s also very smooth and civilised. Overall there’s an acceptable, tractable degree of low-down power which progresses smoothly into a muscular midrange before hitting a top end rush that has you rushing towards the horizon in an astonishing blur. The Blackbird really is that brilliant.

Although the Super Blackbird’s big 1137cc inline four engine is largely conventional, and was actually derived from that of the Fireblade, it works brilliantly well, has fabulous performance and is also ultra-reliable. Dual balancer shafts mean it’s smooth, allowing it to be rigidly mounted helping make the Blackbird lighter yet stiff. It’s also fabulously refined. In 1999 fuel-injection replaced carbs while a catalyser was added to its 4:2 exhaust in 2002 but otherwise there were no changes. It’s also bulletproof and almost completely reliable and high mileage examples should give few concerns. Cam-chain tensioners and regulator/rectifiers can fail, as with most Hondas of this era, but as long as properly maintained you’ll have nothing to worry about.

www.superblackbird.co.uk - Is a UK-based forum dedicated to Blackbirds. 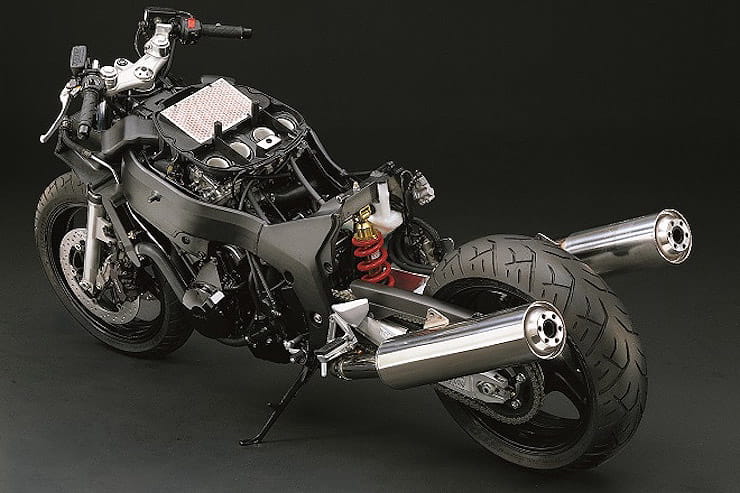 Although a superb long-distance sports toured, the Blackbird is first and foremost a large-engined, high power, performance orientated hyperbike so economy was never going to be its strongest suit. As a result, typical mpgs will be in the mid to high 30s depending on use, although, due to the large 22-litre tank this should still return a reasonable 180 miles between fill-ups.

Pay a bit more and you can get the updated 1999 fuel-injected model with a larger, 24-litre, fuel tank, however it isn’t as economical on fuel as the carbed machine and a lot of owners search out the older bike because of this.

Although there may be no getting away from the fact that the Super Blackbird is a big, long hyperbike weighing a fairly hefty 223 kg, it’s also worth pointing out that it’s also 10kg lighter than the ZZ-R1100 that it dethroned and a full 15kg less than Kawasaki’s more recent ZZ-R1400. Its chassis is impressively rigid, its suspension taut yet also proving a reasonably plush, comfortable ride, the Blackbird is also neutral and stable and overall the handling is sporty without ever threatening to get out of hand. 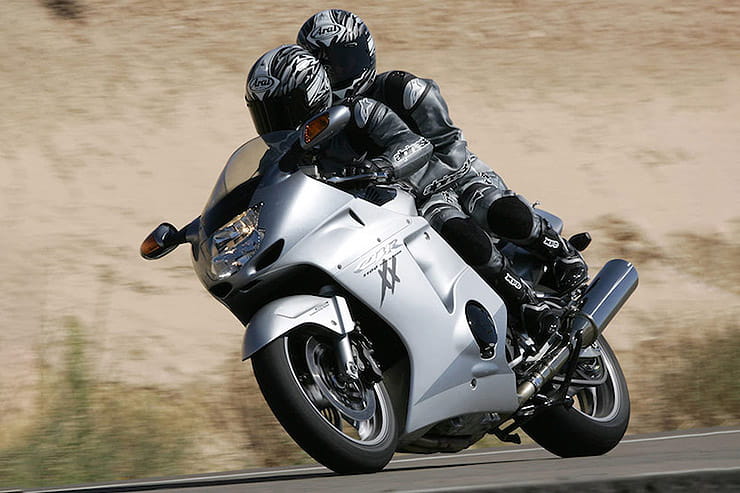 The Blackbird came with Honda’s D-CBS linked system using three piston calipers biting onto big discs front and rear. Basically, when the front brake lever is applied, two of the three front pistons are activated along with one of the rear caliper and vice-versa when the rear brake lever is used. They work well enough and don’t lack power (although there’s no getting away from the fact that the Blackbird, fully loaded, is a big, heavy bike to haul up) and do add a touch of reassurance in slippery conditions. Some owners, however, are sceptical, purists prefer conventional systems and, due to its complexity, overhauls can be expensive.

Despite being built for speed the Blackbird is a very comfortable sports tourer, far more so than the bike that knocked it off its perch as the fastest production machine. Suzuki’s Hayabusa may have been able to hit 190mph (before it was electronically neutered to 186mph), but it did so by sacrificing comfort for performance. Hop on a Blackbird and you can be 600 miles away from home before you know it, attempt something similar on a Busa and you wrists will be aching by the time you have used up your first tank of fuel.
That said, some Blackbird owners (who often tend to be more ‘mature’ types) do boost comfort further by adding bar risers and/or double-bubble screens.

Although the CBR1100XX Super Blackbird was a range-topping machine in its day, meaning that it was well specced, with a comprehensive dash including a fuel gauge and clock, luggage points and mainstand, it’s also a machine from the pre-digital age. As a result there’s no electronic rider aids, the dash is mostly analogue (although this was updated in 2002) and not even ABS. The later, 2002-on versions are arguably the best while in 1999 it was also updated with fuel injection however some owners actually prefer the carbed originals. Official accessories are limited, but popular owner add-ons include fitted hard luggage, heated grips, higher screens and performance exhausts. 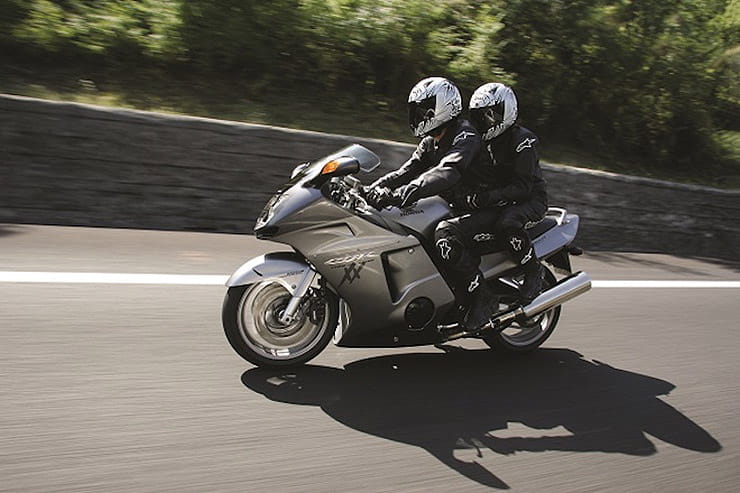 The Blackbird marks a glorious time in motorcycling. In some ways it is a relic of a bygone age where speeding wasn’t such an evil crime, a throw back to an era where big engined monsters such as the ZZ-R1100 ruled the earth. But in other ways it highlights the errors in modern motorcycles. Its top speed may have created the headlines, but there is so much more to a Blackbird than simply going fast.

Anyone who has owned a Blackbird will tell you the level of build quality and finish on the bike is simply outstanding, which is why so many are still on the roads today.

Some riders are put off owning the Blackbird because of its reputation for speed, however this is only a very small part of its vast repertoire. It’s also a brilliant, classy, almost timeless sports-tourer that’s durable, uncomplicated, and refined. In short, it’s just a damn fine motorcycle to ride and enjoy.

Three things we love about the Blackbird…