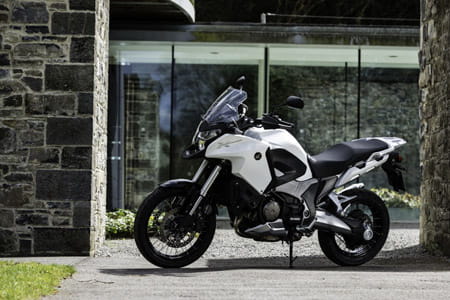 Since the biking world realised that there’s more to life than doing 180mph on a race track while contorting your body into positions it shouldn’t really go into (while fully clothed at least) the practical side of motorcycling has come on in leaps and bounds. Bikes like this tasty Honda Crosstourer for instance, a modern adventure bike with a touch of class.

The Crosstourer is bursting with modern gadgets, like DCT – Honda’s excellent Dual Clutch Transmission to give it its full name. The bike also has their superb Combined ABS braking system (C-ABS), traction control and let’s not forget the 1237cc V4 engine layout, which gives a characteristic feel and sound to the bike. The engine is coupled with fuss free shaft drive, so there’s no messy chain to lube or adjust, a bonus when you’re out in the desert – or commuting through winter. Add in some additional hard luggage and a few goodies from the accessory brochure (standard on the £14,299 fully loaded Crosstourer Highlander), stick a pillion on the back and you’ve got a capable tourer with Japanese levels of finish. 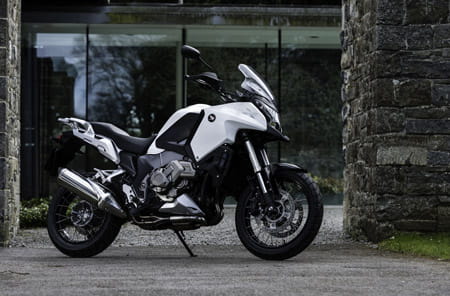 DCT is something that arrived as an optional extra on the VFR1200 in 2010, since then a quarter of all new VFR sales are for DCT equipped bikes, the system has since been added to four more models and there are more on the way. It’s basically a clever way of changing gears without erm, changing gear or using a clutch. To the uninitiated it could almost be thought of as a gadget you don’t really need… or want.

Try it though, especially on a longer journey and you’ll quickly fall in love with it. We had 400 miles of beautiful Southern Irish countryside to cover and although you can still change gear manually (well with tiptronic style buttons) by the end of day one I had more or less forgotten about doing anything manually, the clever electronics had replaced the need for a foot change, clutch or button shift. Changing gear is so 2009 and when I got back on a ‘proper’ geared bike I realised just how much less tiring DCT is (those clutches hurt your hand!) and also how well the system works, it’s much smoother, especially when riding two up. 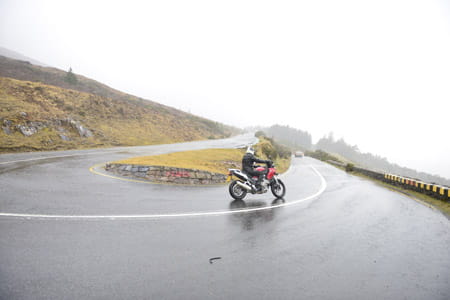 On the road the Crosstourer works very well, the engine (and chassis) is lifted from the VFR but has been fettled to reduce the power to a more manageable 127bhp (the VFR is 170) and give more oomph at low revs and in the mid range, it works very well. The VFR’s geometry may have been altered to suit this application and long travel suspension added for that adventure bike feel but the bike can still be fun to ride, it powers out of bends, romps along the straights and slows perfectly before hitting the next section of twisties.

Every ride can be an adventure. The suspension may not be over the top with BMW like electronic adjustments (less stuff to go wrong) but the forks are adjustable for preload and rebound and they do the job well enough, as does the rear suspension. 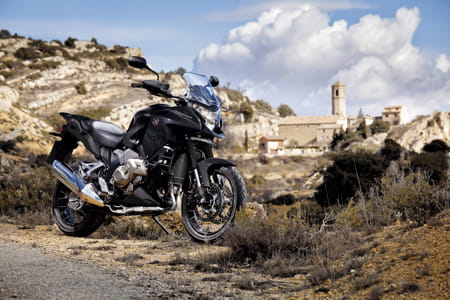 Having ridden all the current DCT equipped bikes the Crosstourer is my own personal favourite. The VFR is smooth, fun and stealth like, the Integra is a great bit of kit but sadly lacks the storage space you’d expect from a scooter, the NC700X and S are both good at their respective jobs too but the Crosstourer just has that bit of extra character that made me want to keep on riding it, I also had a pang of ‘Orrr’ when the nasty man from Honda took away the keys.

Dual Clutch Transmission uses two clutches working together within a single housing, one clutch selects odd gears, (one, three and five), while the other selects two, four and six. Gear changes are controlled by electro-hydraulics to give fast, smooth and efficient gear changes while still retaining the feeling of an actual gear change. Riders have three options; fully automatic, or two manual modes D for Drive and S for Sport. 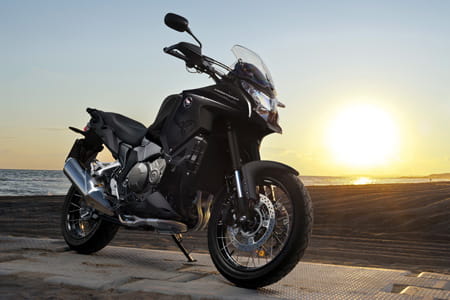 Manual modes are controlled by left bar mounted tiptronic style buttons, index finger for up and thumb to change down. There is no clutch lever and to change gear in manual mode you can leave the throttle wide open like on a race style quick shift, simply press the button. Whichever mode you use is much smoother than a conventional manual shift because each clutch has its own solenoid and hydraulic circuit to pre-engage the gear in a split second to provide fluid gear changes.

On the Crosstourer/VFR the engine automatically ‘blips’ on down changes to further smooth out gear changes. You can change down, or up manually at any time to override the auto system and it reverts back to auto afterwards (first generation DCT didn’t revert back to auto) unless you preselect manual mode using the button on the right handlebar. The ‘D’ and ‘S’ mode switch is also located on the right bar. In ‘D’ mode the system reacts intelligently to rider input, if you’re a sportier type of rider it will hold on to gears for longer to match your style, ride a bit more sedately and it’ll adapt and alter the mapping to provide better fuel economy.

The system can even detect that you’re cornering and will minimise any mid corner gearshifts to help keep the bike stable. Sport mode is, as you’d expect, for a more energetic ride, it’ll hold gears for much longer to keep the revs up and will also use more fuel.