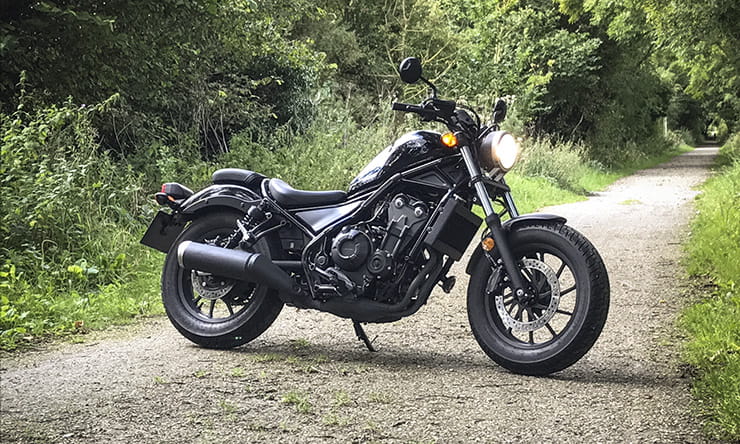 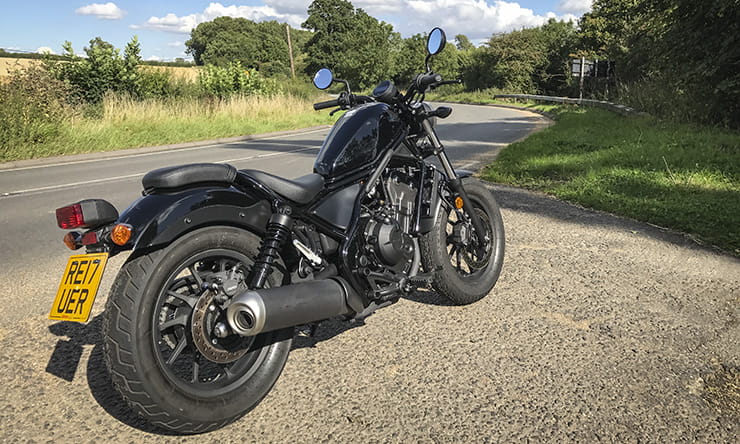 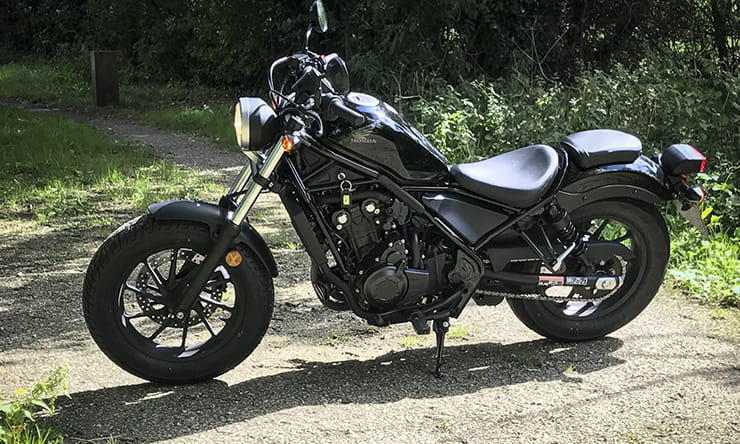 Honda’s new CMX500 Rebel is the blackest, most bad-ass-est A2-compliant bike you can buy. Powered by Honda’s well-proven and much admired 471cc parallel twin motor, in an all-new bobber-style lowrider chassis that gives confidence to new riders and those with shorter legs, while not being too cramped for cider-bellied six footers either. Easy to ride and like all the CB500s it works because the engine is designed to make 45bhp, not restricted down from a higher power figure.

The CMX gets up to speed quickly, cruises at motorway speeds without feeling stressed, averages 64mpg and is nimble enough in town to put you at the front of the queue. Well put together, like you’d expect from a Honda, but good value too at £5399 otr. 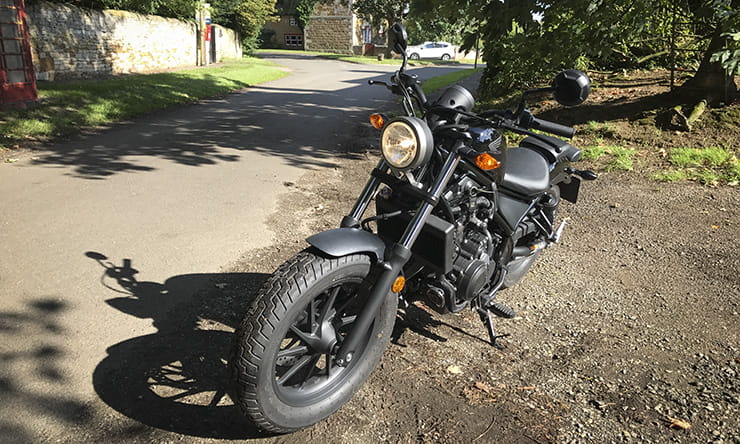 If you rode your brand new Honda CMX500 through a time tunnel onto the set of legendary biker movie ‘The Wild One’ you’d have had Marlon Brando and Lee Marvin fighting to ride your bike. ‘Whatcha rebelling against Johnny?’ ‘Well I’m a bit pissed off that I’m the star of this film and some generation-jumping newbie turned up through on a 500cc Honda making 10bhp more than my 1953 Triumph Thunderbird 650, weighing 5kg less, that handles and brakes like a GP bike in comparison and doesn’t vibrate or break down every five minutes.’

It would be easy, as a rider with 35 years under his wheels to be dismissive of the CMX500, but it’s a motorcycle and in all those 35 years I’ve yet to find one that doesn’t make me chuckle or bring out the mischievous non-conformist. Honda’s CMX500 Rebel might be less threatening than Surly Spice in your sister’s favourite boy band, but it doesn’t matter. What I like about bikes like this is that they bring out the ‘other’ Steve and bizarrely, that’s the rebellious one. I’m not proud of this, but it always happens.

The best example of this in my time on the CMX was one daft trip from Coventry to Cadwell Park; Eleven acts of minor rebellious dissent.

Bike Social’s Coventry high-rise is guarded by Jim a proper old-school challenge in a fluoro jacket. No one breaks the rules, no one gets past without being told how life is and no one gets through the barriers without a pass. Except… I’ve lost my pass and asking for another is too scary. There’s a pedestrian walkway from the car park down to the main door with only a few steps in it. Too wide for an adventure bike (I might have tried this before when I lost my last pass), but I reckon the slight, little CMX can get through. There’s no one about, so why not. Snick it into first, make the most of the gentle power delivery, easy clutch and lack of bulk. Stand on the pegs as the soft suspension makes light weight of the stairs. One, tight, feet-up U-turn later and we’re out. Try doing that on a Fireblade and you’d have no bellypan and bruised boy-globes.

Act two: Nothing to see here

It’s not a bus lane as such, more a bus ‘zone’. A couple of hundred metres joining the city centre to the ring road. It does clearly say on the sign ‘buses only’, but nipping through here will save five minutes on the long way round and that’s assuming I don’t get lost (which I usually do in Coventry).

I know this is bad and it’s only five minutes, but part of me is wanting to show that this little Rebel can roar. What would Brando do? Of course he would. So with the flexible, quiet motor in low-revs stealth mode, we glide across the tarmac and re-join the main road – no one got hurt. I feel slightly bad, but it’s hardly ‘Police, Camera, Action’.

I love riding in town. Call me sad, but wafting past long lines of stationary traffic makes me feel like a winner, enjoying some daft mid-life fantasy that their occupants are secretly wishing they could be me. The Rebel is great for this. Low and easy to manage, well balanced with an easy power delivery, light clutch and brakes that are powerful enough to save your blushes, but rarely trouble the ABS.

Modern traffic management – the creation of bus and cycle lanes – along with the ever-fatter cars has made this harder, but when your bike is as narrow as this there are filtering options not available on bigger machines.

Is it wrong to use the box for bicycles at the front of traffic lights? My bike’s log book says ‘class of vehicle; bicycle’, so that’s where I sit, getting dirty looks from a spaceman alongside called Cannondale. Don’t mess with me pal, I’m a Rebel.

Act four: Let’s see what this baby will do

The M69 linking Coventry and Leicester is eighteen miles long, rarely that busy and most of the traffic sees the 70mph limit as advisory. The CMX’s A2-compliant motor, knees-in-the-breeze riding position and lack of fairing ought to see it struggle here, but Honda chose the gear ratios smartly, opting for lively acceleration rather than a high theoretical top speed. Which means the Rebel hits 70mph quickly, cruises at 80mph and still has a bit in reserve. I might have accidentally maxed it out back there at an indicated 92mph - Brando would be disappointed, but he’d soon be won over by the smooth power delivery, slick gear selection and flexibility of the engine. 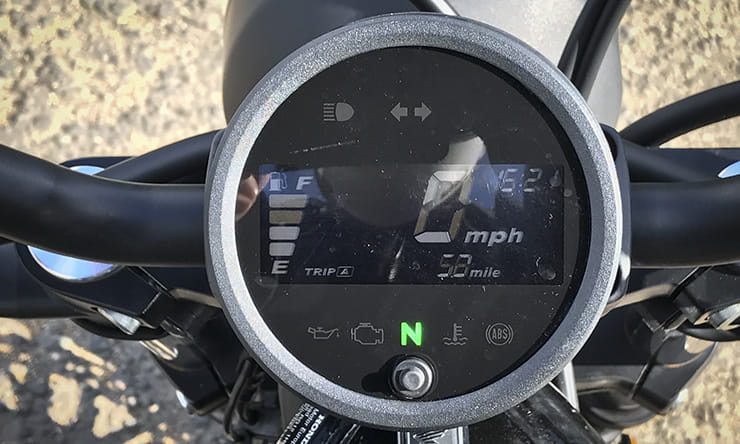 He’s doing 55mph, there’s not much traffic around and both other lanes are clear. On a superbike, I’d just undertake. Not legal, but me breaking one law has got to be less worrying to any lurking traffic cops than van man breaking three.

Undertaking needs to be done and dusted quickly and I’m not sure the Rebel has enough acceleration left in top gear to get the job done, but shifting down to fifth might end up with the motor screaming and even less acceleration. I know it gets from 60-75mph quickly though, so slow down, move into the inside lane, drop down to fifth and am surprised by how easily the Honda rips past. Job done.

Why does no one wave when you’re on a small bike, a custom bike or a small custom bike? Same Stuff you then I’m doing my mean face now inside my Shoei. Wave at yourselves suckers.

Act seven: Is this a race?

The bloke on the 1998 Kawasaki GPZ500 is acting casual. He’s looked back once and has no idea what bike is following other than it’s a small, black bobber. I saw him first, up ahead on the wonderful B676 from Melton to Colsterworth. I’m not a racer and I’m not racing now, but as I get closer he starts to go faster. Now what? He’s on a 19 year-old Kawasaki, bouncing around on 19 year-old suspension and I’m on a softly sprung, brand new bobber running balloon tyres. The Honda steers easily but soon ties itself in knots as the suspension loses it rhythm if you go charging into bumpy corners. Slow down, take your time and brake less but steer more while on the gas and the Rebel will get round with some kind of accuracy.

I love this. Neither of us are actually racing, but we are both very aware the other is there and both trying to maintain the current respectable distance between us. At Buckminster we get caught in traffic, which I get past before he does, reversing our positions and letting him look at the CMX.

Now it feels like one of us is racing and that bothers me, so I indicate left, let him past and turn into a junction to wait and let him get ahead. We’ll call it ‘not a draw’ because we weren’t racing.

Surprisingly for a CB500 engine the fuel light comes on at 100 miles. Ten miles down the road when I find a garage, it takes exactly two gallons. 55mpg doesn’t seem bad considering we’re covering the ground as fast as I did last week on my BMW R1200RS (which did 48mpg) and a quick spec-check shows that the rebel has a teeny 11.2 litre (two and a half gallon) tank. For the rest of the test the Rebel averages 64mpg, giving a theoretical range of 150 miles. 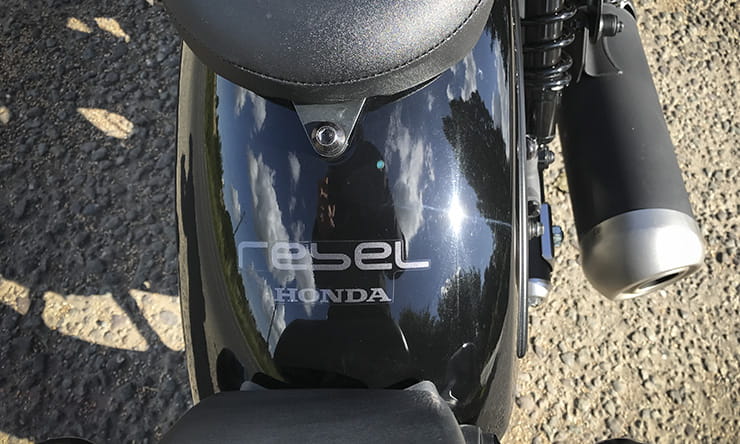 ‘Toilets for McDonalds customers only’. Does it count that I am an occasional McDonalds customer even if I’m not buying anything today? After fuelling and draining I pop next door to see what kind of attention the bike gets from the local Yoof. Outside, a group of four late-teen lads are giving it the once-over. They’re trying to work out how big it is, which is an oversight on Honda’s part because it doesn’t say ‘500’ on it anywhere, making it easy to assume that because of the compact dimensions it may not be sufficiently macho to warrant teenage approval. The guys decide it’s a 300, like one of their older brother’s Kawasaki, I give in and buy a coffee.

Act ten: If a tree falls…

Stuck at roadworks…again. Middle of nowhere, no sign of workmen, nothing coming the other way. A quick look round and…and… If a CMX500 Rebel runs a red light and there’s no one there to see it, is it breaking the law? What would Brando do? Exactly.

I’ve been sounding the horn all day. Usually on a modern Honda I get the ‘indicators and horn reversed’ thing quickly, but on this bike I keep forgetting and pressing the horn instead of cancelling the flashers. Fortunately, the Rebels’s hooter is so quiet and camp, that people just laugh instead of getting grumpy.

What can I say? I like it. The CMX500 made me smile when I rode it, got me where I wanted to be pretty much as quickly as anything else, was good on fuel, easy to ride and, at £5399 isn’t a lot more expensive than some of the posher 125s. As an alternative to a scooter for commuting it’d be brilliant, as a first big bike for urban-riding A2 licence holding hipsters or goths, I can’t think of a more suitable machine. If it’s on your list then try one, I don’t think you’ll be disappointed. 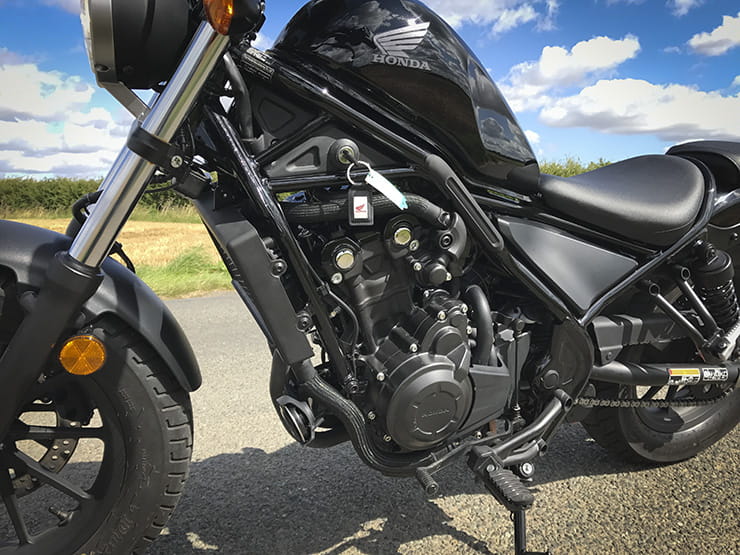