How to make a rally-winning Honda Africa Twin 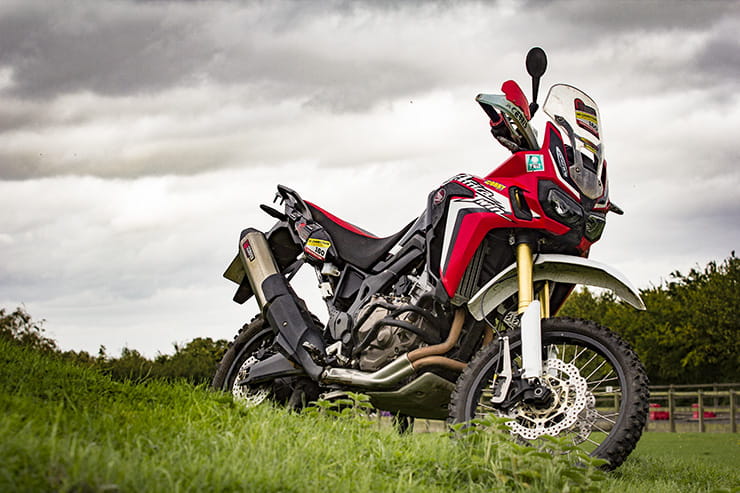 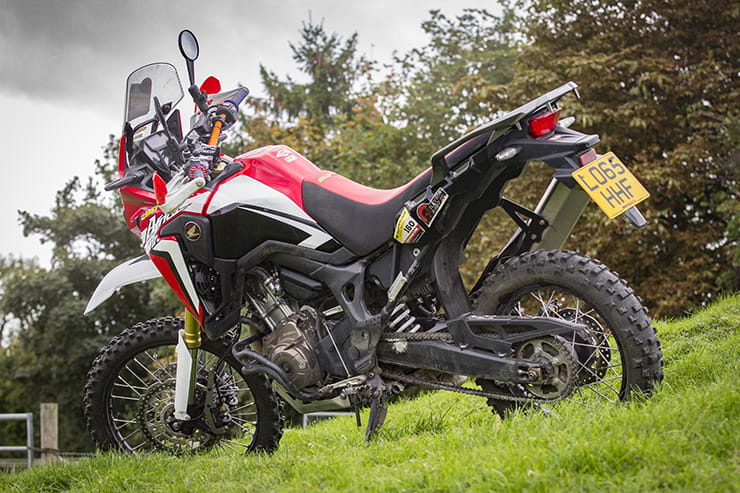 The invite was casual; “There’s a rally in Croatia – five days of tough off-road riding. Do you want to race the Africa Twin in it?”

“Okay, I’ll book you in. There’s just one catch. You’ve got to ride the bike to the start.” 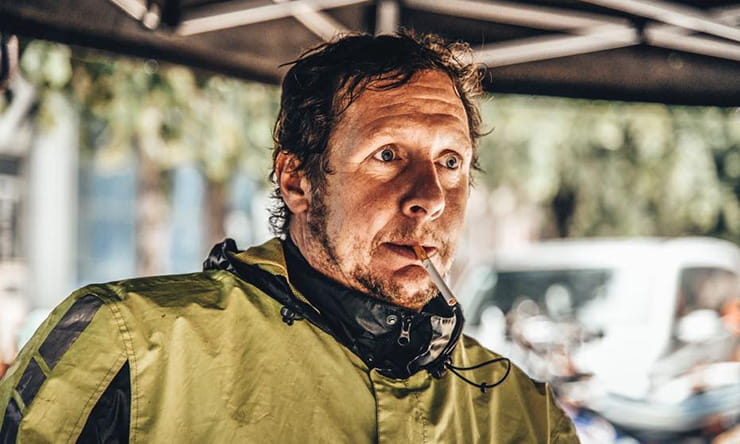 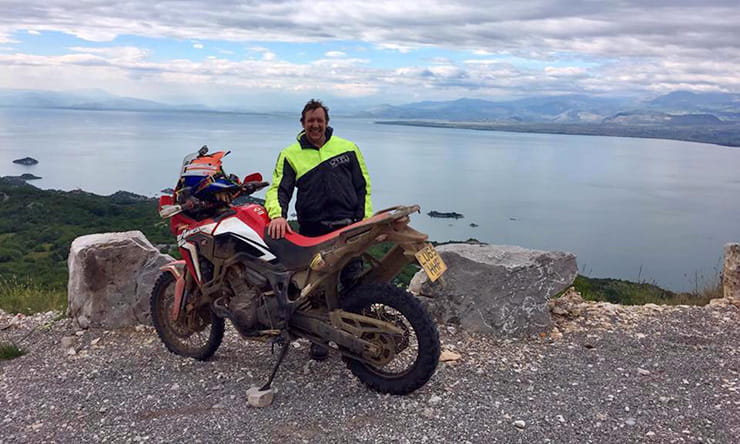 Chris Cork faced 2400miles of travelling for a 1400miles rally

The event was the Illyria Rally in Split on the Croatian coast, which crosses five countries in seven riding days – covering 150 to 220 miles – 75% of them off-road – each day. And of course, it was to be two days of riding to get there, then back again afterwards, covering about 1200 miles each way.

“Chris turned up at the start of the rally with a rucksack,” John tells us. “I sent down the race wheels in a truck that was going for another team, as well as a spare brake lever, clutch lever, oil and filter, and a bag of fuses.

“Despite the other competitors thinking the ‘boy on the road bike’ had no chance, Chris won the adventure class and came sixth in the enduro class. He even got a special award because he took part in one of the stages that, unbeknown to him, had been cancelled because the track was so badly flooded. Nobody believed he’d done it until he showed his GPS track.

“The worst thing was, at the end of the race he had to ride the bike back home again. The organisers thought I was being cruel.” 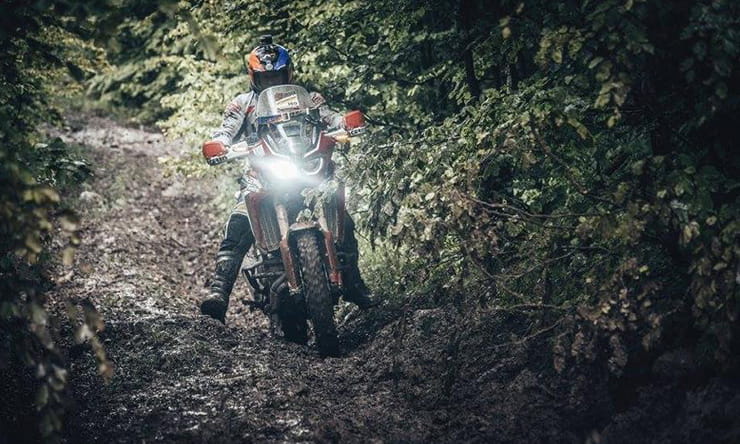 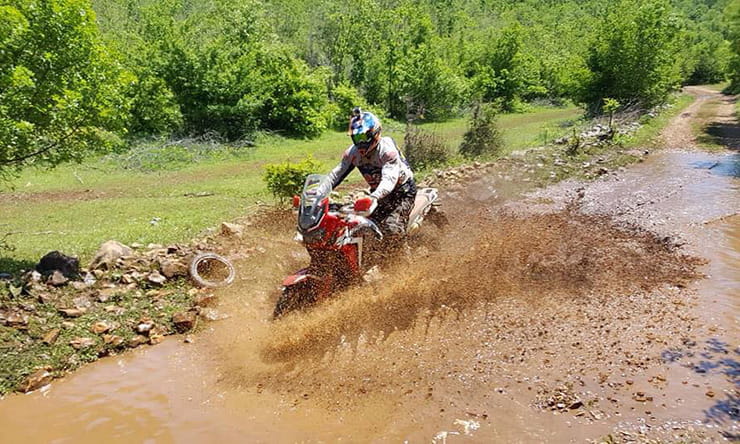 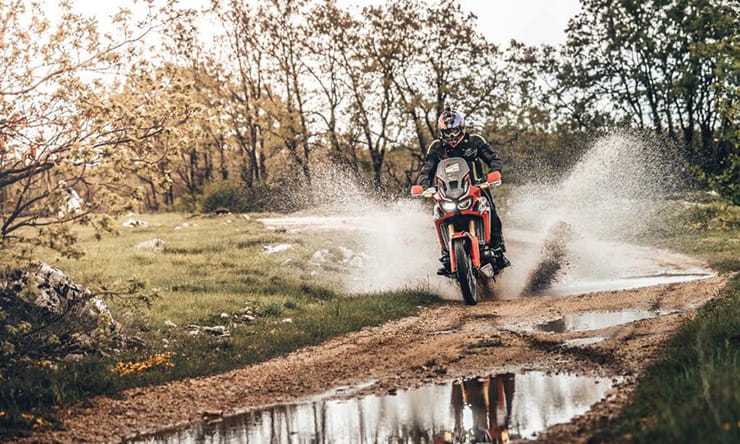 The bike he rode was a mildly modified 2016 Honda Africa Twin, fitted with Rally Raid's uprated hubs and rims, Touratech suspension by Dutch firm Tractive, and a new in-house billet aluminium triple-clamp and prototype Scorpion exhaust. The rest of the bike was standard.

“Tractive made us a special twin-piston rally shock; not to get more wheel travel – though we did achieve 10mm more – but mainly to get much better damping and springing; that sort of terrain would just cook a standard shock.

“We also had new fork intervals – a new closed-cartridge kit made to give much better damping. We then made our own top triple-clamp to take a steering damper, which you need for serious off-road work, and also to be able to run decent Renthal bars. The standard bars don’t really have a good shape for racing.” 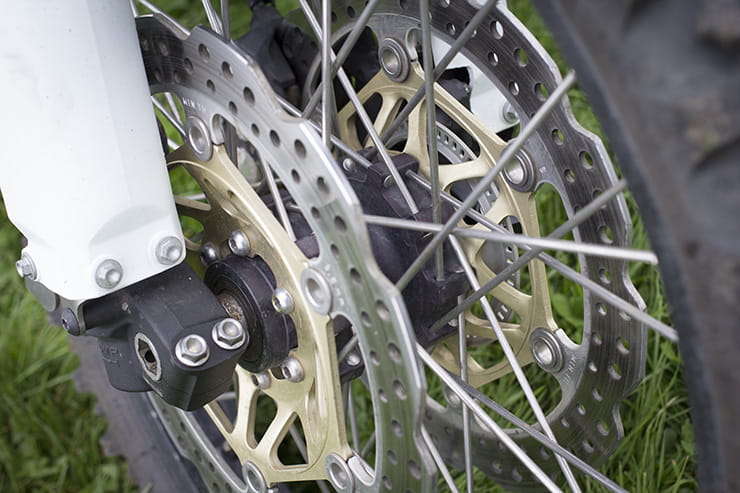 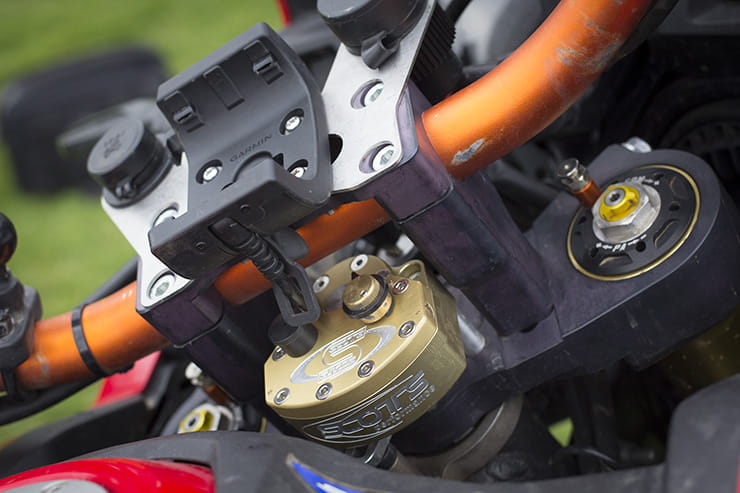 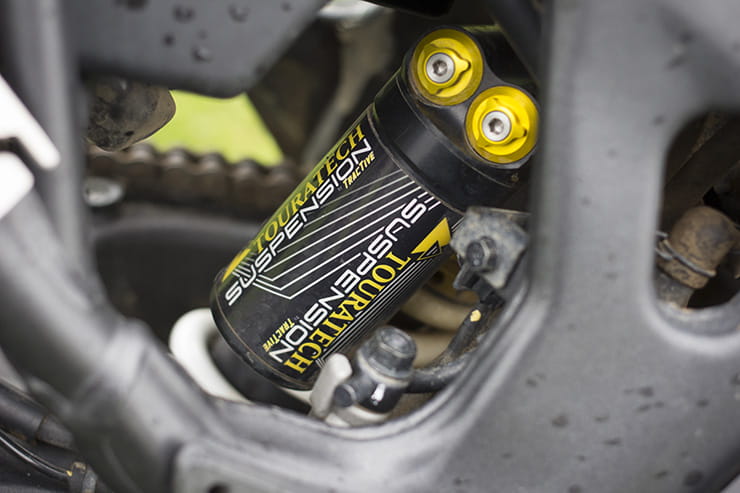 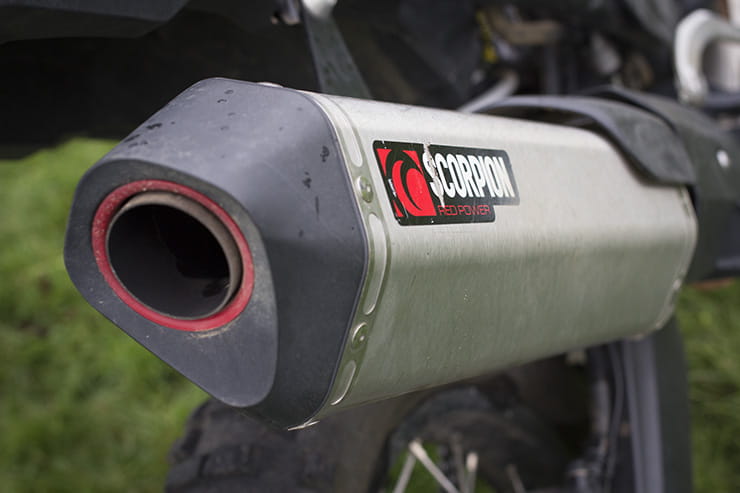 “On top of that we’ve got our own heavy duty billet hubs, mated to narrower rims so you can fit enduro tyres and mousses. The standard rims are fine for road tyres but if you want to run in a rally you don’t want punctures every day. So we run the foam doughnuts – which only fit an enduro wheel – in place of an inner tube.

“Other than that we just equipped the bike with a GPS and safety equipment such as flares and a first aid kit. We also swapped the standard twin seat for a one-piece Italian rally item that allows you to slide about better when off-road. We made our own heavy-duty pegs that are a redesign and extension of the standard pegs. We also had a development silencer from Scorpion and a new high-level front mudguard by Camel Adventure Products in Canada.” 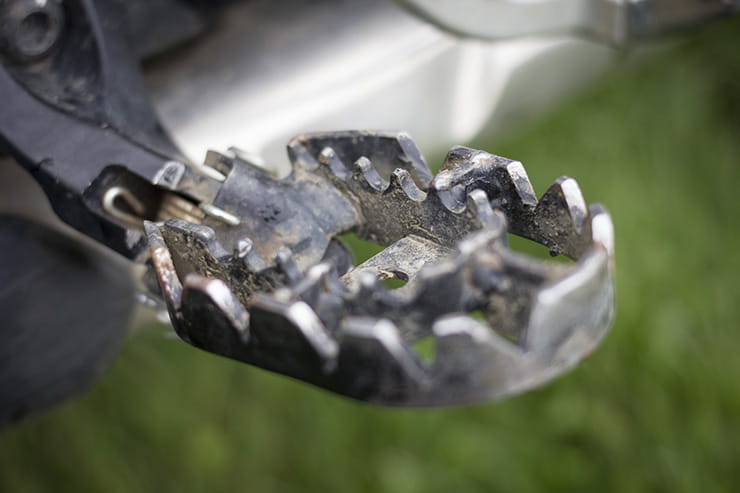 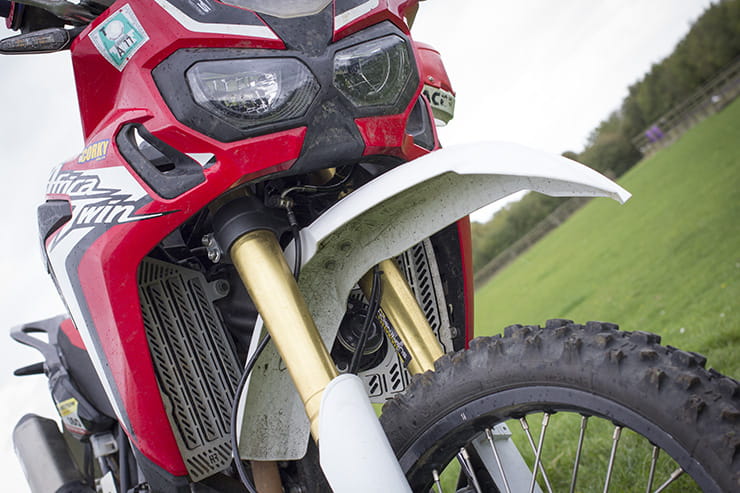 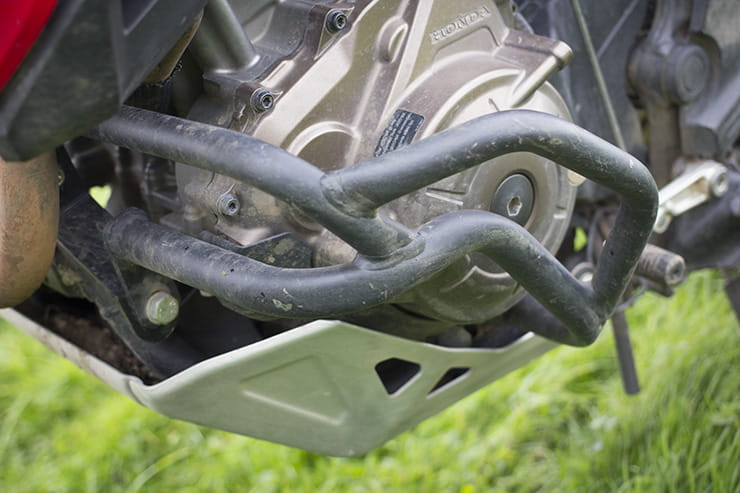 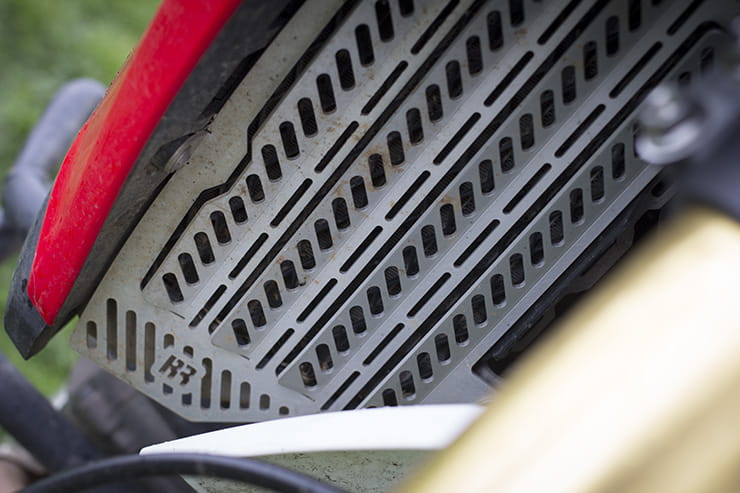 This isn't just a bike built solely for rallying though. It's a bike built as a platform to demonstrate the improvements the parts will make to any Africa Twin, whether competing in a rally or just touring two-up in the Alps. As well as the enduro wheels, a set of uprated hubs and rims will also be made to the Africa Twin's original OEM sizes.

“People might look at it and wonder why they need a new wheel,” explains John. “And the answer is not only to replace the non-stainless steel spokes of the standard wheels – which tend to rust – but also the fact that the standard rear wheel only has 32 spokes, which we increase to 36 spokes, feeling that’s better suited to a bike likely to be carrying a lot of luggage and pillion. Our spokes are not only stainless but our rims are also tubeless, which makes for much easier puncture repair than tubes.

“With the new rims we also took the opportunity to increase the bearing size of the front hub to match that of the rear, which saves you carrying two different spare sets. The standard front wheel bearings of the Africa Twin are actually smaller in overall diameter than those on the CB500X, so we increase the size to hopefully improve their longevity.”

John’s also looking at other wheel configurations. “Once in production we’ll look to do a 17/17 super-moto setup, as well as a 17/19 configuration for those looking a more optimum road-biased size. It’ll also reduce the seat height by an inch, which should help anyone struggling with the height of the Africa Twin.

“The biggest challenge out of all of this was the new triple-clamp, trying to find enough room to fit the steering damper. We’ve had to put the damper mount under the triple-clamp, fixed to the frame. It was a bit of a job figuring that out.

“Entering a rally is a great way of testing a bike,” John explains. “Things like the new linkages and triple-clamps, which we already test to destruction, get a proper workout and we can see how they respond and work in real-world conditions. You’re never going to make something unburstable, but you have to show and prove things are stronger than OEM. Everything we do for the adventure bikes we tend to race first.”

As well as the Extreme rear shock absorber fitted to the bike Chris rode in the Croatian rally, there's also a softer, less expensive 'Explore' shock by Tractive (branded as Touratech). This is designed for people who want improved road-biased performance, especially when touring two up, but who don't need the technology or off-road performance of the Extreme shock.

Prices for the suspension upgrades are still to be confirmed, though the tubeless OEM-sized wheels are set at £1620, and the tubed rally wheels £1380. The billet aluminium triple-clamp will retail for £204. 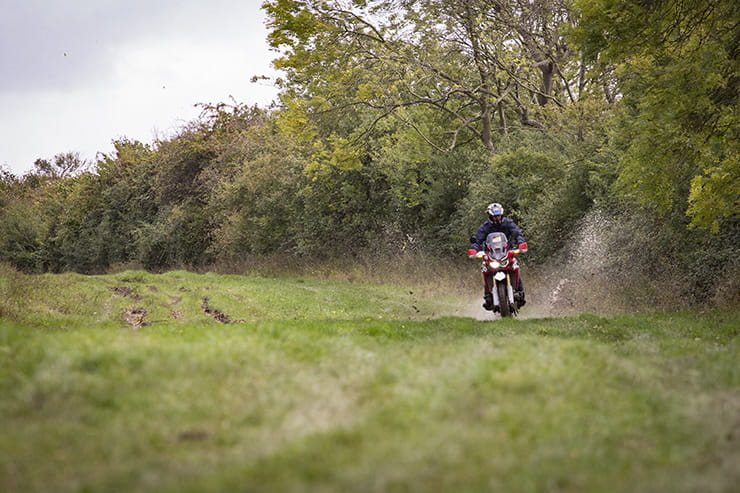 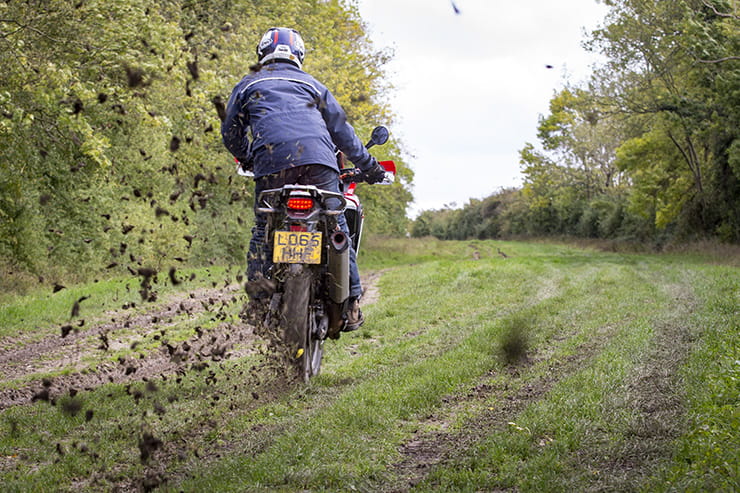 I've always been slightly underwhelmed by the standard Africa Twin. To me at least, it rode like a softly sprung, slightly top heavy and somewhat cumbersome trail bike, with detailing such as the non-stainless steel spokes that made it feel something less than a premium product; there was always a sense that it could have been better… that it had more to give.

Climbing onto the Rally Raid version you immediately notice the increase in saddle height. The bike’s tall now, especially with that bench seat. Fire up the engine and the note from the Scorpion can immediately gives the bike more noise and character. It’s a good sound. The powder-coated billet triple-clamp and steering damper lift the sense of quality around the cockpit area, while the Renthal bars give a better position than the stock items and the foot-pegs give a much wider and longer platform.

This is a manual bike, which I much prefer over the Dual Clutch Transmission model, especially for off-road use. Off-road riding is all about clutch control, especially on a tall and relatively heavy bike such as the Africa Twin. A DCT makes life easier, certainly on a decent-paced trail, but on slow, technical terrain I much favour a clutch over an auto (dual clutch) transmission. There’s no right or wrong; that’s just my personal preference.

Taking the bike out onto the road you have to be mindful of the enduro tyres. They’re not best suited to tarmac and it’d be good to see how the bikes goes with the regular sized wheel with regular knobbly rubber such as Michelin’s Anakee Wilds. Immediately though, it feels firmer and more taught. The exhaust gives a nice bark on the power: it feels like a big enduro machine. 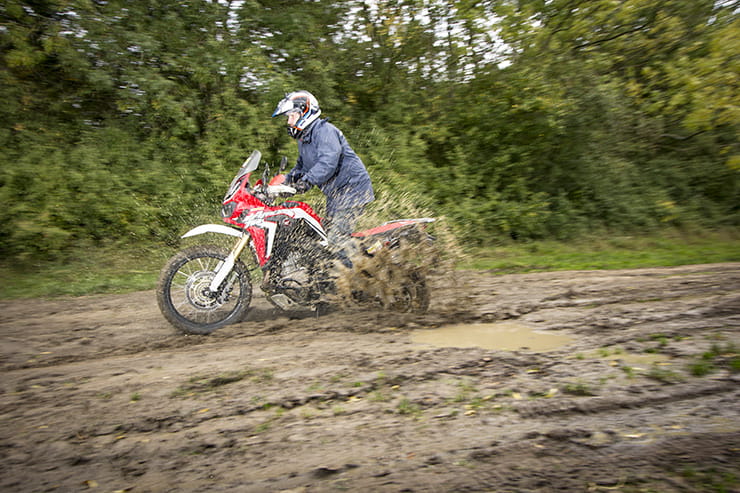 On to the dirt and along a very sludgy, rutted trail. The bike just grips, the narrower tyre slicing through the mud where a wider tyre, especially on something like a BMW R 1200 GS, tends to plough through, which, as a result can slew around and slip away with the camber due to a lack of side bite. It doesn’t happen here. You feel confident. You push harder. The suspension is firm but at the same time direct, seeming to somehow remove the doughy mass you sometimes feel around the headstock on the standard bike. To an observer it seems to keep the bike in a more constant plane, rather than compressing and rising on impact with bumps, which in turns causes loss of traction.

It’s brutally efficient. That’s the best way to describe it. It's a still a shame the bike reverts to its original settings of Traction Control and ABS every time you kill the ignition, but there's not a lot Rally Raid can do about that.

All up, is it worth the cost of upgrade? I would say it definitely is. For the fact the new rims bring tubeless tyres and stainless spokes, and suspension that just adds a whole new level of capability and confidence in the bike. It makes the bike exciting, which is something you could say the standard Africa Twin sometimes lacks. The thing you take away from this is just how much difference good suspension makes to a bike. It's easy to overlook it, but the difference is night and day.

As an Africa Twin sceptic, Rally Raid has, for the first time, made me quite want one. If you already own one and are looking at ways to improve it, this is a great route. Otherwise I'd buy a year-old bike and spend the difference compared to a new one on the upgrades.