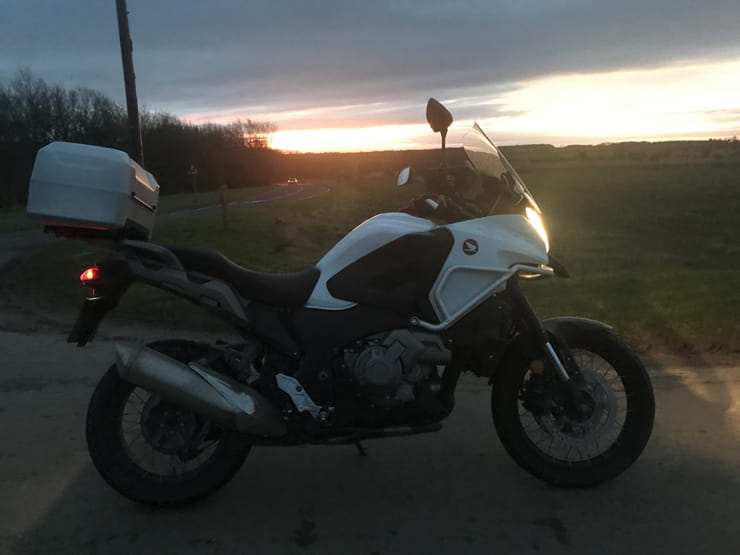 Here’s a question. Does a motorcycle have to be exciting to be good? Here’s another. Is it possible that any 1200cc motorcycle that makes 130bhp and out-accelerates Ferraris can be anything other than exciting?

Honda’s Crosstourer is confusing me. This is the fourth one I’ve ridden. I remember on the press launch sitting next to the project leader and discovering that in his youth he’d been fascinated by two stroke race replicas and had owned a Suzuki GSX-R1100. He wanted to build a sporty adventure bike in the VFR tradition. Sounds good to me, but every time I ride one it takes a while for me to appreciate how much I like it.

And I do like the Crosstourer… a lot, but when I’m riding it, I feel confident, comfortable and glad I chose to commute by bike, but rarely emotional or excited. This is a bike that brings out the sensible in me. My journeys in the last few weeks have been calm and measured, without the usual eye-widening, sphincter-clenching overtakes or holding onto the throttle for an extra half-second just for the hell of it that makes two-wheeled winter riding worth doing.

And yet, this is a bike that makes more power than my old GSX-R1100, has a beautiful, smooth engine, flawless power delivery, traction control, ABS and suspension that does comfort and control like only Honda knows how to. Plus, it’s shaft driven, built to survive a journalist’s winter (non) cleaning regime and much more confident (and therefore quicker from A to B) in the cold, slippy January misery than any 287kg motorcycle has a right to be.

I feel bad for not being excited about it, but that doesn’t stop me riding it on days when any sensible human would be in the car. This one has Honda’s dual-clutch, DCT semi-auto gearbox. I’m a big fan, so long as you stay clear of the ‘D’ mode which changes gear in a completely different timescale to how I would. In ‘S’ mode it’s almost perfect, snicking up the gearbox seamlessly and, more importantly, timing downchanges well enough through corners that I don’t notice. Early versions of DCT had a tendency to change down mid-corner which was interesting on a heavyweight, shaft-driven VFR1200. Thankfully, there’s always the option to switch to manual and simply change gear with the paddles on the left-side switchgear. 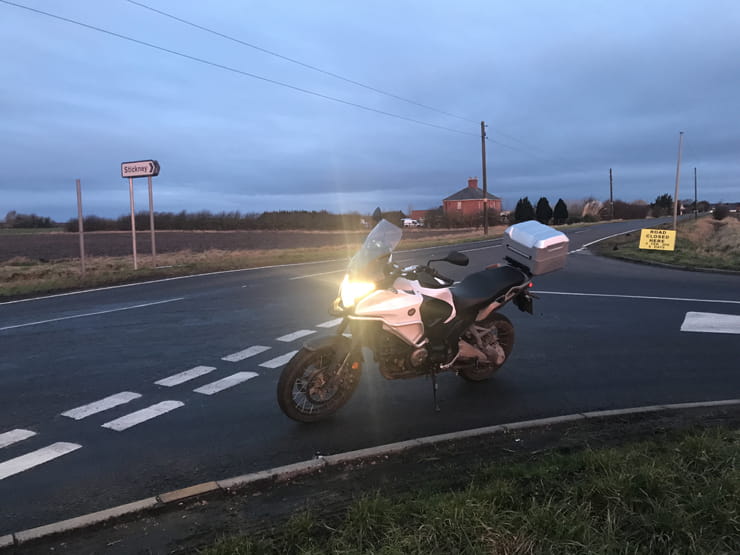 If you’re still sceptical about DCT, try it. Ideally on the latest Crosstourer, Africa Twin or the new Gold Wing, because you’ll be genuinely surprised at what an advance it is. Filtering through traffic without having to feather a clutch is just one of the significant benefits, not banging heads with your pillion is another. I can only liken it to how liberating it must have been in the 1920s when some bright spark moved the gear lever from hand change to foot change on a bike.

What’s also interesting about the Crosstourer’s levels of non-excitement is that it lets you concentrate on some of the less-shouty bits that might not enthrall road testers, but make a huge difference when you actually own a bike. Things like the headlight, which doesn’t look much on the VFR but works better than anything else I can remember on a bike. Last summer I actually laughed out loud the first time I switched on high beam on the BMW R1200RS I was borrowing. It was so ineffective that I genuinely couldn’t work out why they’d bothered, and don’t get me started on the Yamaha MT-10’s candles. The Crosstourer on dip beam is superb, but switch to main and you can see far enough ahead to ride 20mph quicker than the BMW and about 40mph more than an MT-10. 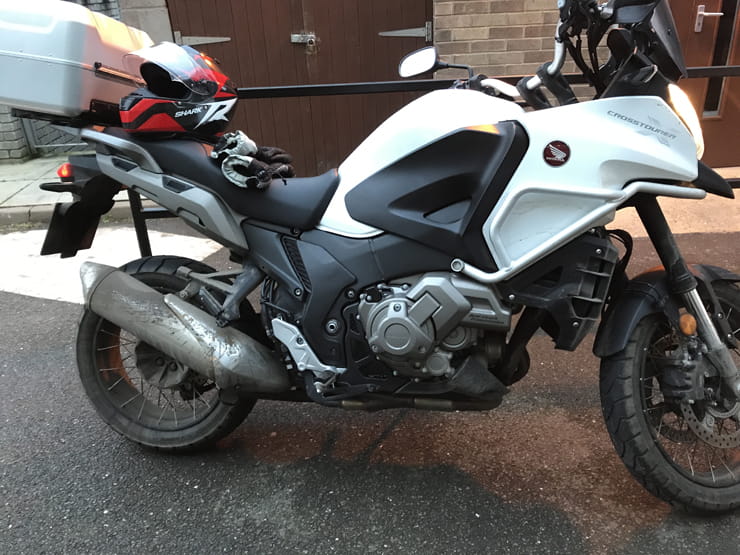 Then there’s the ride quality. I remember from previous tests that Crosstourers have good enough suspension go round corners well for a touring bike (and a tendency for the front end to go a little light at autobahn speeds), but since collecting this one we haven’t troubled any kind of lean angle sensor that the traction control might have inside. What I can tell you is that despite the roads seemingly crumbling around me this winter, the ride quality and control from what is probably the least advanced suspension in the adventure monsters class is just superb.

And that’s the thing. As soon as you mention ‘adventure bike’ the Crosstourer struggles. Because it isn’t one. What it is is a Pan European for ex sports bike riders who aren’t ready to accept that they have reached the ‘Pan’ stage of life. The Crosstourer is a superb touring bike with a sportier outlook than most tourers, but much more practical for two people than any sports tourer. Does that make sense to you, because it took a while for me to get it? 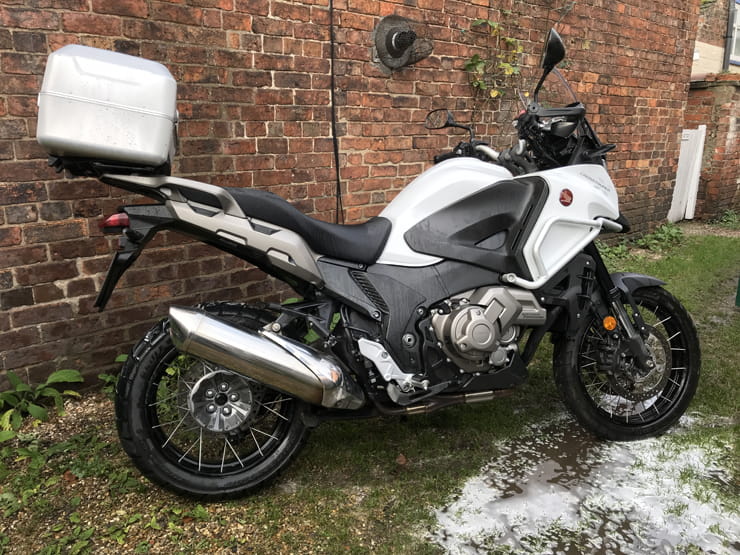 The Highlander version like we have comes with heated grips, full luggage, centre stand, but no DCT for £14,549 and £15,389 for a DCT version.  If you’re looking for an adventure bike, to actually go adventuring off-road on, then you’d be daft  to buy one instead of a BMW or KTM. But if you want a properly built touring bike that you’ll keep for years, with a brilliant headlight, all-day comfort and no more pillion headbanging, I’d say you should head for your Honda dealer and haggle like your holiday depends on it. BikeSocial had a quick look around the dealers and most are very keen to sell you a Crosstourer right now, with pre-registered, zero mile bikes on sale for around £13k or less. That’s the asking price, without haggling and Honda has some attractive finance offers too at the moment.

For that money, it’s a very tempting motorbike. 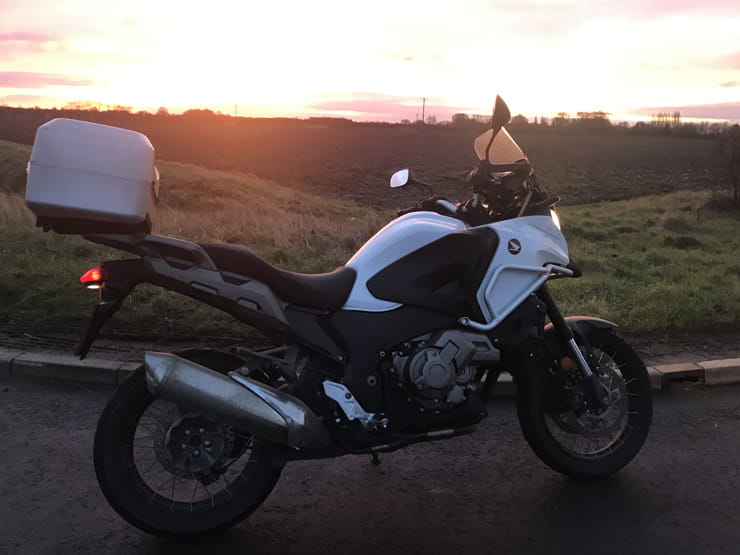 Same alloy beam frame as the VFR1200 with less rake, increased trail and longer travel front forks. Wheelbase is 1595mm which is 40mm more than the VFR1200. 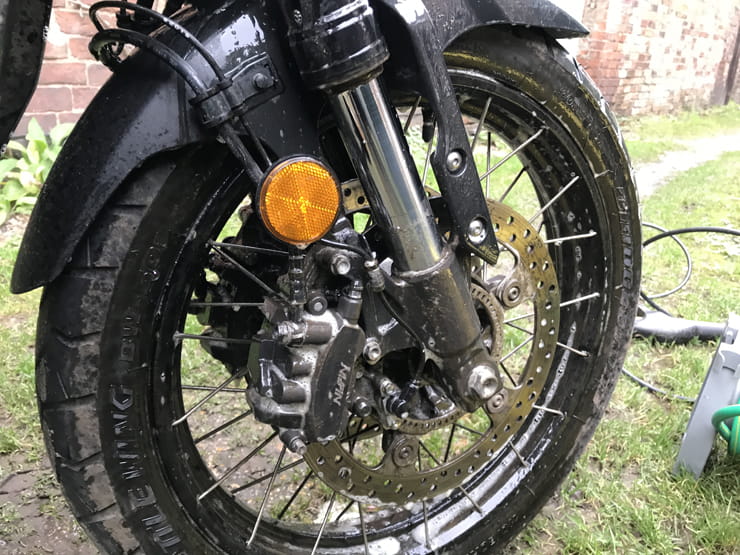 Big silver boxes look good but are made of lightweight plastic, not metal. Top box and lhs pannier will hold a full-face lid. 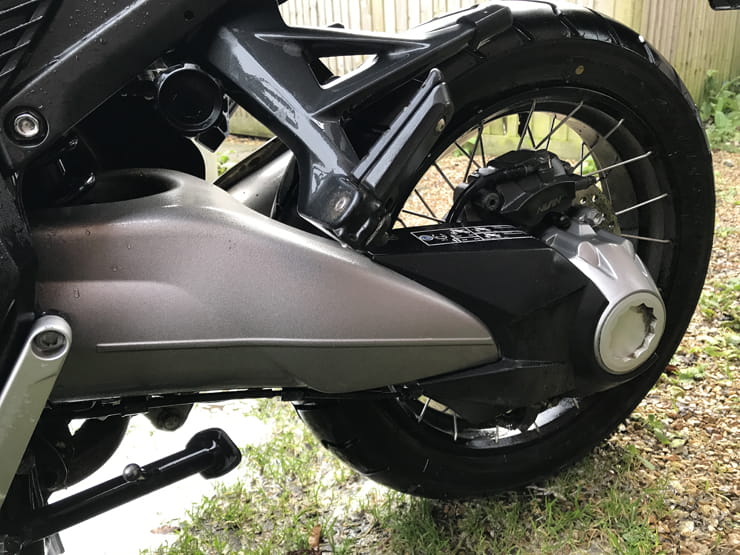 Non adjustable seat is tall (830mm) but not as tall as a BMW GS. The riding position is similar to the BMW - comfy on the arms and neck, but all the weight goes through the small of your back. Screen is effective at motorway speeds and is two-position adjustable with a simple lever. Fuel capacity is 21.5 litres (4.75 gal) which, with a typical consumption figure of around 43mpg means an easy 160 miles before panic sets in.

The system uses two clutches (One does first, third and fifth gears, the other does second, fourth and sixth) so the next gear is always pre-selected making changes faster and smoother. In manual mode it’s superb - quicker than the quickest quick shifter - in auto modes it’s mostly ok.

It takes a while to get used to it (especially hill starts and filtering because there’s no clutch lever) but once accustomed it’s a great system. It costs £840 on top of the standard bike’s £14,549 price tag - once you’re used to it, you’ll be glad you spent the money.