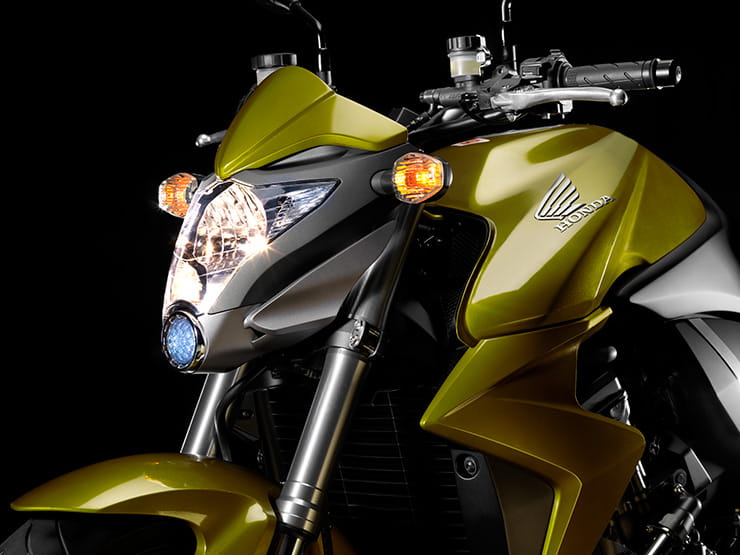 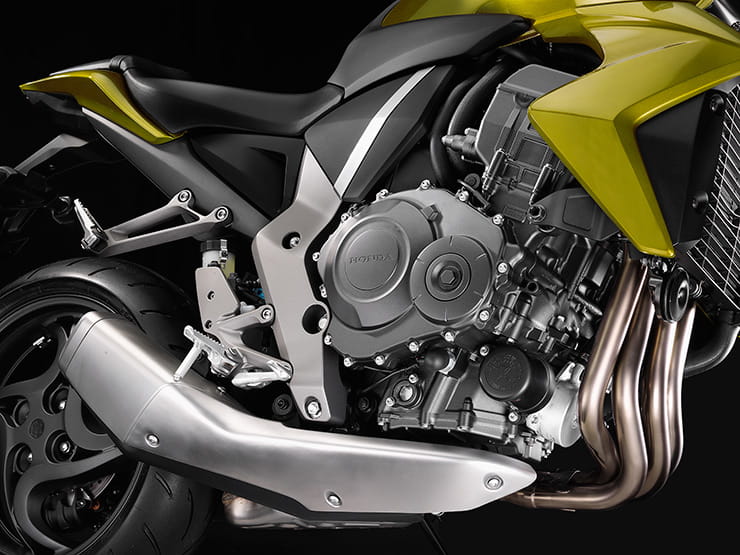 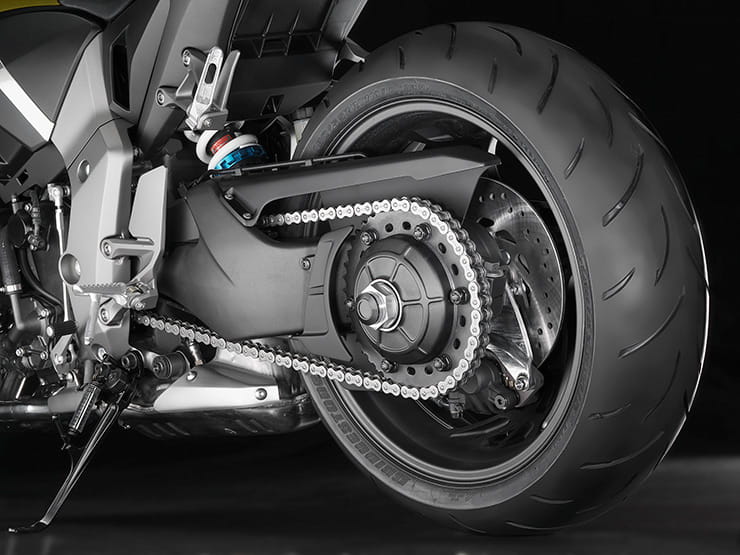 Honda’s Fireblade-engined naked bike promised much, but sadly, like the Hornet 900 before it, the CB1000R failed to meet expectations. Rather than a fire-breathing super naked, instead Honda created an easy-going roadster with a motor lacking that spark of excitement required on such an aggressively styled machine. That’s not to say the CB1000R is a bad bike, far from it, however in the cut-throat world of the super naked, it found itself languishing at the bottom of the pile. However, to the canny used bike buyer, this unpopularity makes the CB1000R a brilliant, reliable secondhand buy that can be injected with a bit of attitude through some cheap and simple upgrades… 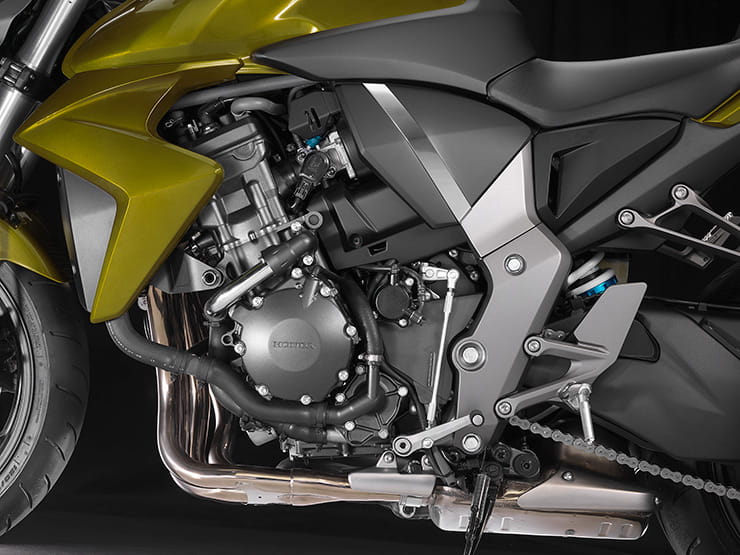 The heart of any bike is its motor and on paper the CB1000R should have delivered. Its 998cc inline four was taken from the 2007 Fireblade (the final year of the underseat pipe generation) and given a host of changes that Honda claimed boosted its midrange by 30% while a tweaked gearbox made shifting between cogs slicker. With the focus on torque and not top end power, Honda’s engineers redesigned the Blade’s cylinder head with new cams, inlet and exhaust ports and a revised combustion chamber that reduced the motor’s compression ratio. This was then mated to smaller 36mm throttle bodies (the Blade’s are 44mm) and a new ECU to give a claimed 125bhp with 74lbft of torque, which was disappointingly 48bhp and 11lbft less than they claimed the Blade made! Honda also fitted a new IACV (intake air control valve) to the CB, which they claimed removed low speed jerky throttle response. The final touches were ‘weight saving’ magnesium engine cases, which were a bit pointless on a hefty 217kg naked… 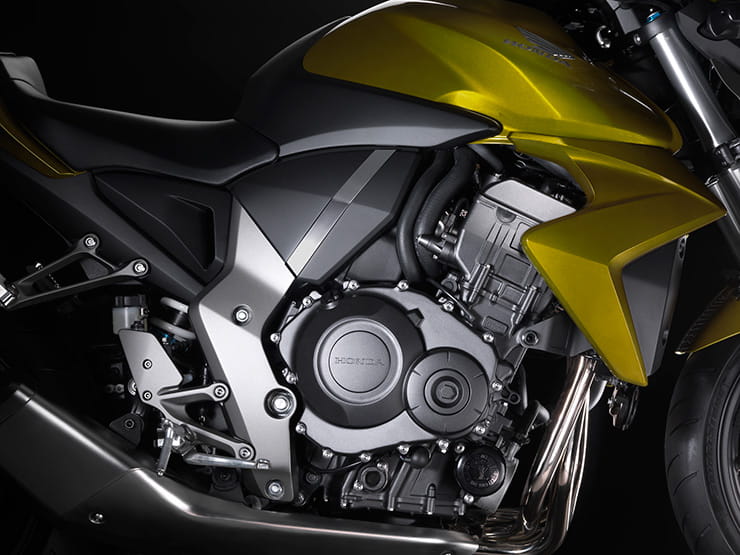 Honda made a big fuss about the fact the CB1000R’s new gravity die-case aluminium frame was both rigid and light, using the engine as a stressed member. Constructed from three hollow cast sections (front head pipe, backbone and swingarm pivot) it was, they claimed, lighter than a tubular steel frame of a similar style yet stiffer. The frame was designed with a focus on mass-centralisation, hence the low-slung exhaust which contained a big catalytic converter as Euro3 emissions laws had come into force. The single sided swingarm was also nice touch, as were the funky wheels, and interestingly the CB’s wheelbase is only 40mm longer than the Blade’s to give it good agility. 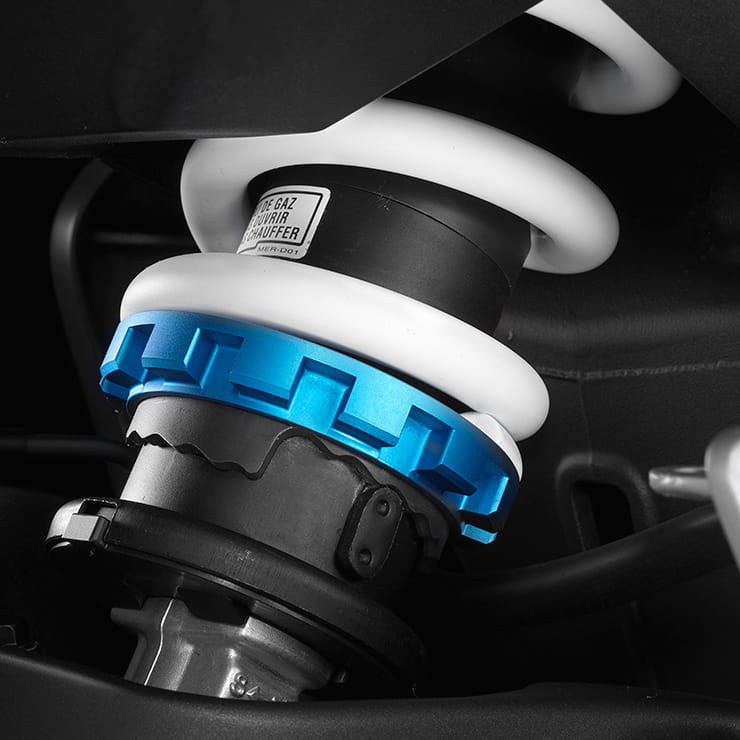 Honda may have claimed the CB’s 43mm inverted HMAS forks, which are fully adjustable, came directly from the Blade, but the truth of the matter was that their internals were completely different and set for relaxed road riding. The shock only has adjustable preload and rebound damping.

Again, like the forks, Honda claimed the CB’s Tokico four-piston radial brakes came straight from the Blade, which they may have done, but they gripped smaller 310mm discs while the rear’s two-piston caliper bites a 256mm disc. The CB was sold with the option of Honda’s Combined ABS system, which replaces the four-piston front calipers with three-piston units instead. The ABS system measures the difference in speed between the bike’s wheels through sensor rings. The CBS system links the rear brake pedal to the rear caliper and centre piston on the right side front caliper while the remaining pistons on the front calipers are only activated by the front brake lever.

ABS was an optional extra for £500, but aside from a digital dash and Honda’s HISS immobilisor system, that was your lot in terms of electric assists. 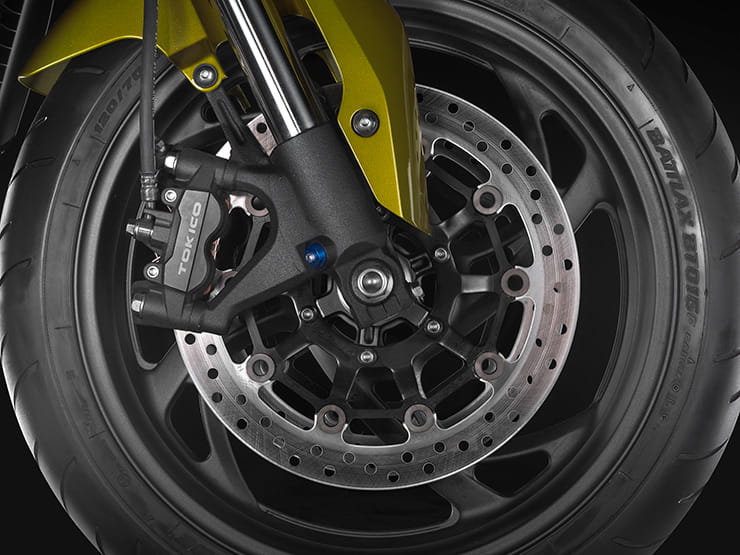 The CB1000R is a naked bike, so the riding position is exactly what you would expect – upright and exposed. The bars are nice and wide, the pegs low and the small dash cover does absolutely nothing to help deflect any wind flow.

While the CB lacks any proper pillion grab rails, there are indents on the bottom of the seat unit that act as hold points. It’s not a bad pillion bike as the rider’s upright riding position makes holding onto them easy and also means they acts as a wind barrier while the smooth motor is good for a relaxed ride. The seat isn’t the most comfortable, but overall it’s not too bad. 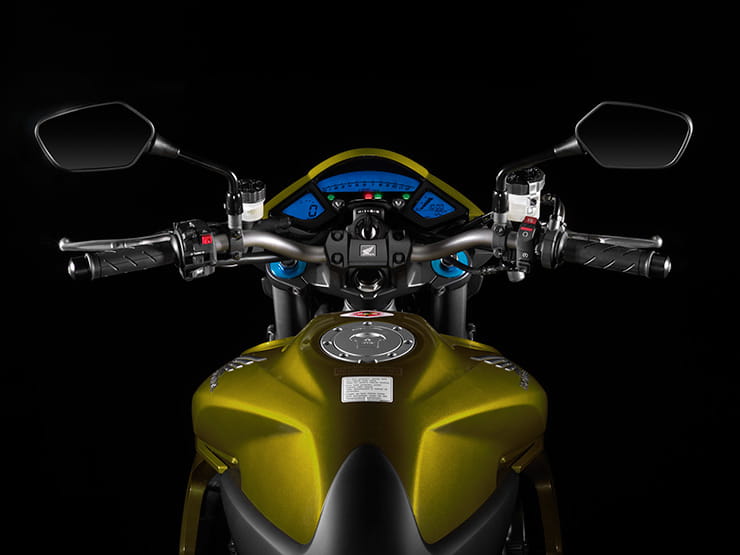 A lot was expected of the CB1000R in 2008, but sadly it failed to meet expectations. For a start one of its colours was a simply hideous green, which did nothing for its styling (white bikes look far cooler) and then there was the motor’s performance. Lacking a thrill factor, the CB was tagged dull and boring and with ‘only’ 125bhp it felt behind the curve from the very start of its life. Where its rivals thrilled with motors that were far closer to their sportsbike brethren, the CB failed to set pulses racing. It was described as sophisticated and refined, but not exciting and thrilling and that killed its sales…

It depends on what you are after in your naked bike. If you want a roadster that is fast but not over the top, has a solid chassis and interesting but not wild looks, the CB1000R is a good buy. Especially when you consider its price tag. However if you want a wild naked, then you are better looking elsewhere as the CB isn’t a beast, it’s not a super naked and it is most certainly not a match for the likes of a BMW S1000R, Aprilia V4 Tuono or Kawasaki Z1000. It can be made to look nice and aggressive, but the CB’s heart quite literally isn’t into going mad, it’s just not built that way. 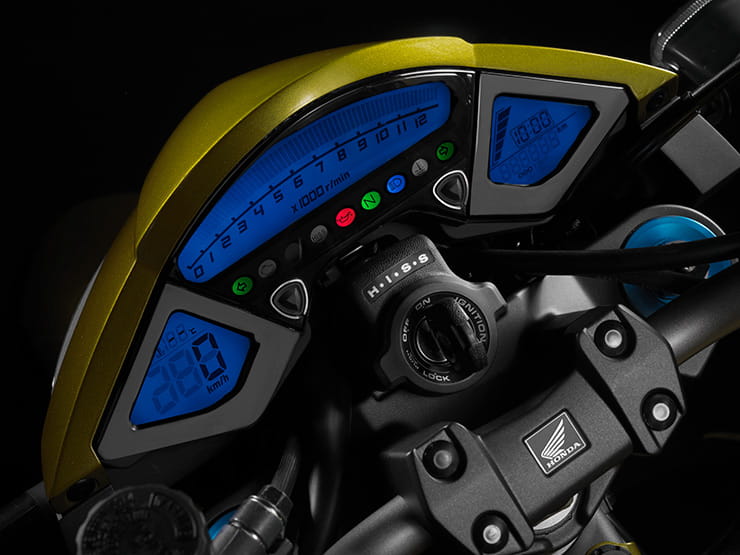 The CB1000R is a very good used buy as so little goes wrong with it, effectively you are buying on condition and extras, which is a good starting point for any second hand purchase. Your only mechanical worry is if the single sided swingarm’s eccentric adjuster has seized up, which is relatively simple to check. And as always, look for signs of the adjuster point being chewed up by incorrect use of (or not even using) a C-spanner.

The bikes with C-ABS are best avoided as it’s not a great system and the stock set-up is far nicer to use, however the main worry when buying used is modifications.

Due to its low price tag, a lot of naked bike riders buy the CB and then try and modify it into something a bit meaner. There are some great mods you can do and adding a chunky set of Renthal bars, lower gearing and a bit of cosmetics such as a belly pan can give the CB a far meaner attitude. But by the same token you need to be wary of a modified bike. If aftermarket bars are fitted always check that the brake lines are long enough (extend the forks fully) and that the throttle cable’s routing is correct (go lock to lock and listen for the motor’s revs to rise). If there is a tail tidy added, see if it is road legal and will pass an MOT and that the wiring isn’t bodged. And be very wary of quickshifters as they can damage the CB’s robust gearbox. 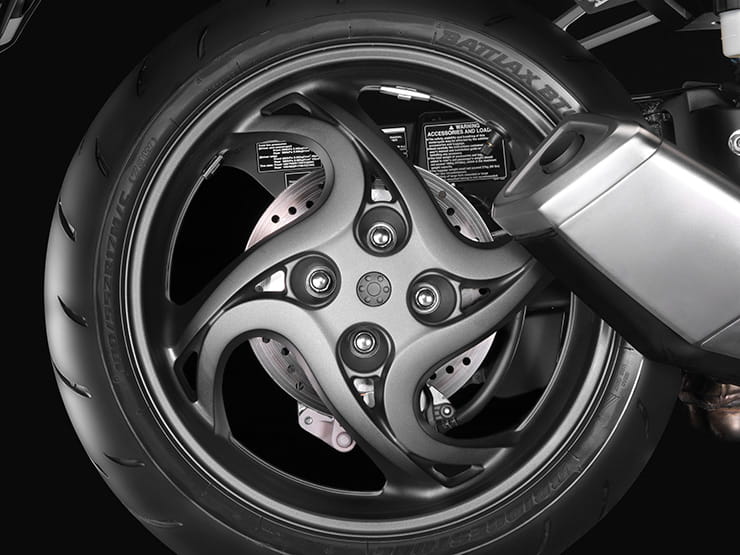 The CB1000R was completely revamped in 2018, when an all-new CB1000R was launched with an upgraded chassis, revised motor and neo café racer styling.

There are loads and loads of CB1000Rs out there, most of which are in excellent condition so take your time and buy a good one. Prices start at just £4000 for an early model in a dealer, so you should be able to get one for in the £3500 region in a private sale. That’s a lot of bike for your money. If you want a minter, £4500 will get you a  beauty. You can spend over £6000 on a CB1000R, but in all honesty, £5000 is more than enough to secure a lovely used example. 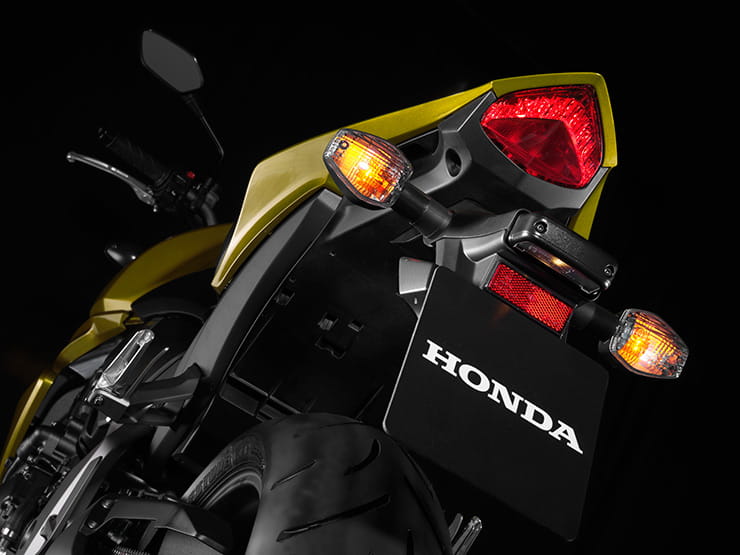