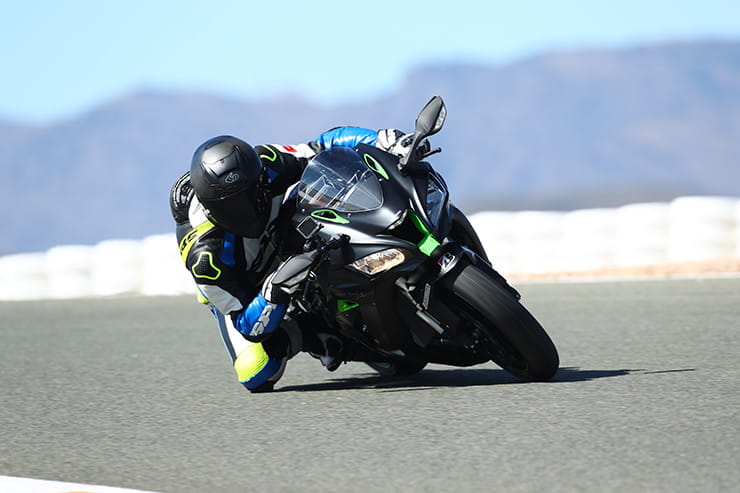 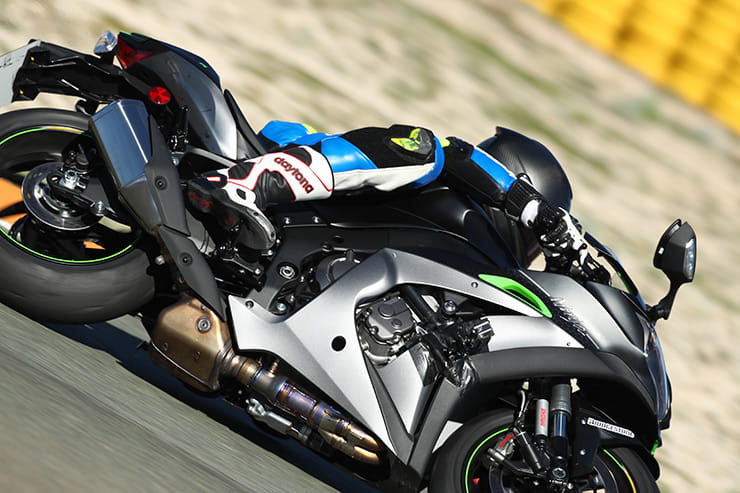 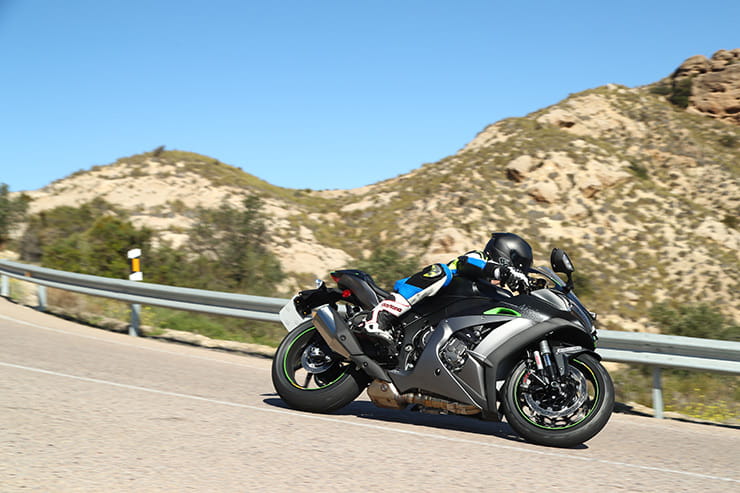 The first question I asked was ‘’where is the green bike’’. There isn’t one- it only comes in black with graphite. The new bike has the standard engine, but also an auto blip down shift and the lightweight Marchesini wheels from the homologation RR version. The biggest news is the Showa Semi-Active suspension. This suspension isn’t allowed in racing (to keep costs down) so not even the RR has it.

Showa’s new system uses the same basic components as the standard bike, but claims to adjust its damping (you still adjust preload manually) quicker and more accurately than the competition thanks to the amount of information it gathers and the direct solenoid that controls adjustment. Other systems use data from road speeds, wheel speeds and amount of rear shock travel to measure road conditions. The ZX-10R’s system adds a fork travel sensor too (one of those big tubes like you see on a Moto GP bike).

The riding position, layout, dash, chassis, motor, electronics and brakes are all the same as the 2017 bike. The dash now has a scroll function for the suspension.

The roads around Almeria make a good suspension test. The surface is good, which makes sense for sports bikes and regular changes in elevation and camber, often at the same time test a bike’s ability to flick left and right while accelerating and braking.

In road setting the bike felt natural. On some bikes with semi active suspension you can feel the front push back up as you brake going down a hill. I never got this push back feeling from the new Showa.

The reason that the new system feels more natural is that the two solenoids in the forks and shock are processing data five times faster than the early semi active systems. I have the first Ohlins semi-active suspension on my 2015 R1M. Ohlins have recently updated their system but the Showa processors are faster  than both. 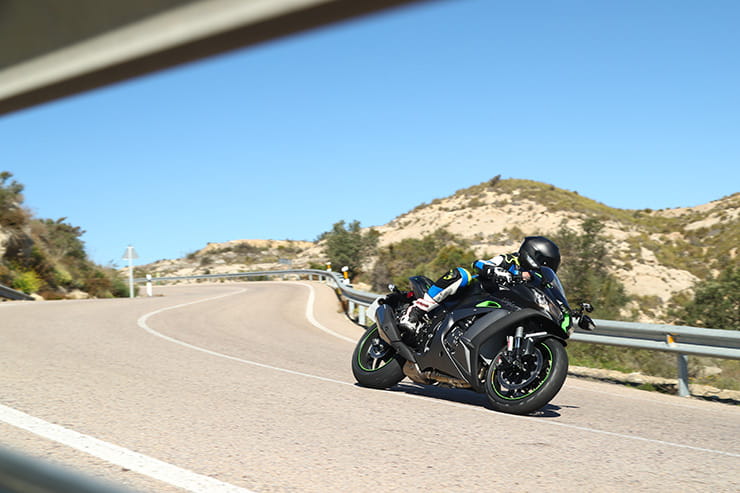 There are three settings; road, track and manual, where you can go into the menus and create a custom map for your riding style. Kawasaki say that the bike is for people that are wary to change suspension or don’t understand what compression, rebound, preload and sag set-ups do.

In track settings on the same road routes, the bike feels much stiffer, but less controlled, highlighting how well the road set up worked. Rutted sections of the road where I hadn’t really noticed the rough surface before became really obvious on the track setting. 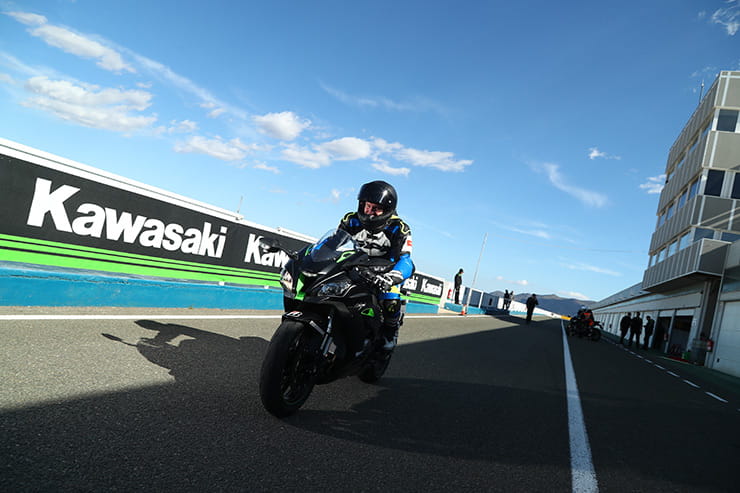 Almeria is a technical track that works suspension hard. Early on, while learning the circuit I’d find myself carrying too much brake into turns, releasing the lever later than I would if I knew the track. Doing this unloads the front end close to my turn-in point which usually unsettles a bike just as you want it to be most settled. It’s a common track problem for many riders learning a circuit and as the forks rebound your sports bike momentarily turns into a long-forked chopper. On the SE in track mode this wasn’t a problem – the system handled the brakes-on, brakes-off transition really well.

The Kawasaki test rider had set up a manual setting for himself the day before. He softened the front compression to give a touch more stability into turns, he then made the rear compression a touch harder which gave him the ability to hold a better line on exit under acceleration. He loaded this setting to my bike.

The difference was pronounced, making the bike feel more planted and confident. 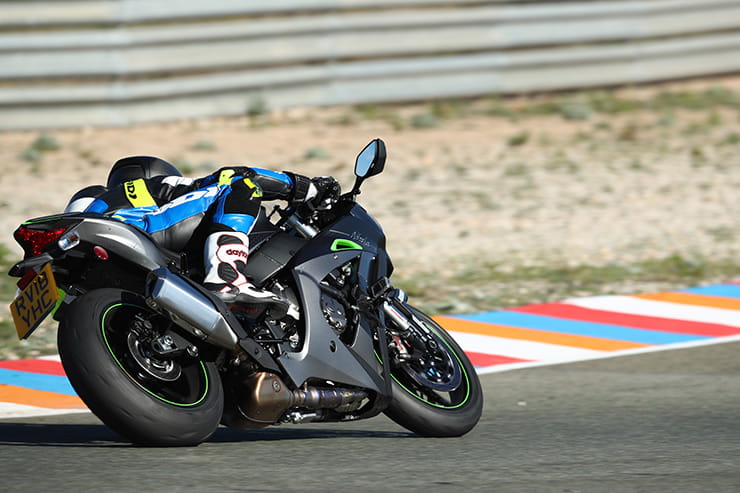 Project leader Yoshimoto Matsuda’s aim with this ZX-10R SE had been to make it “easy to ride – because a bike that is easy is also fast”.

Curiously then, the ZX-10R SE’s motor is still the same rev-happy missile it ever was with a kick in the pants like an after burner. A smooth power delivery means you get on the gas quicker and smoother, but Kawasaki have rarely done smooth or conventional. You have to work harder to get the SE going but when it does it is rapid.

The electronics package is basically unchanged, but the quickshifter allows  clutch-less upshifts and downshifts. (On the standard bike, clutchless downshifts are only possible with the race kit ECU.) 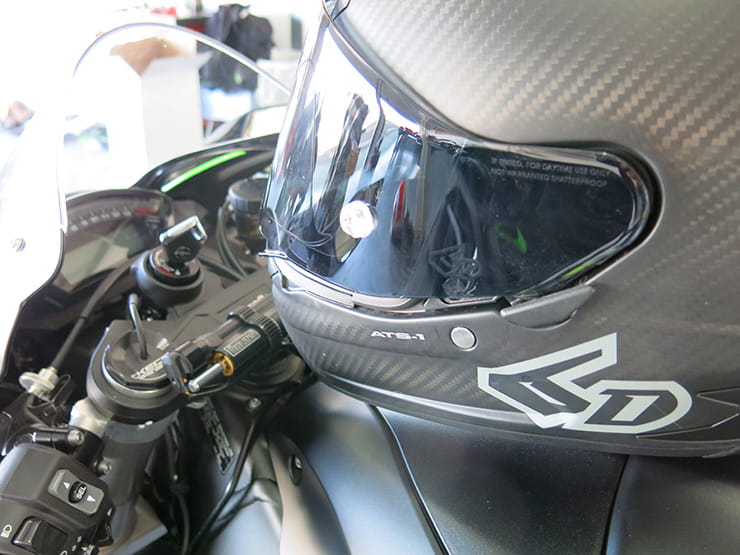 The big Brembo brakes are really powerful and easy to use. A one finger squeeze is enough to get the back wheel off the ground. Braking hard while, changing direction was easy and stable with the new suspension.

I could feel the front ABS working. Not an intrusive shudder, more like a slightly warped brake disc. 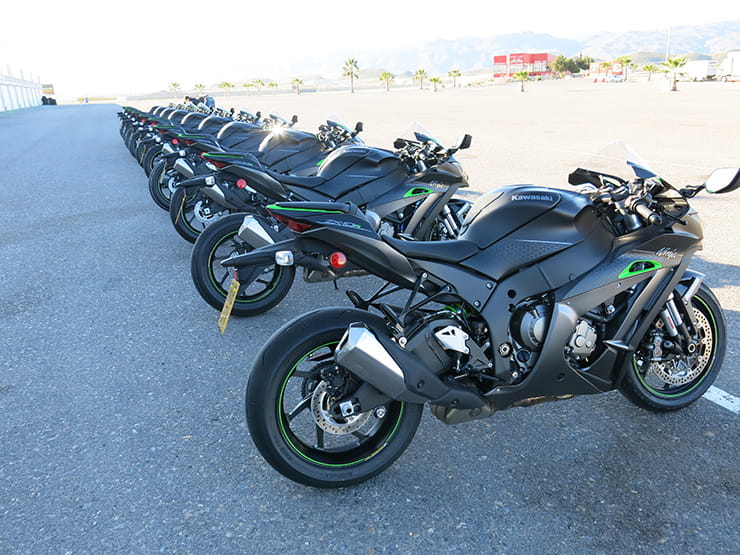 Kawasaki have made a great bike better. If you love the ZX-10R you will love the SE. The new suspension makes switching between road and track settings as easy as pushing a button and the lightweight wheels and up/down quickshifter both improve the performance measurably.

The engine characteristics don’t make it as easy to ride on the road as some of the competition, but the flip side of that is that this is a bike that rewards some thought and rider input. 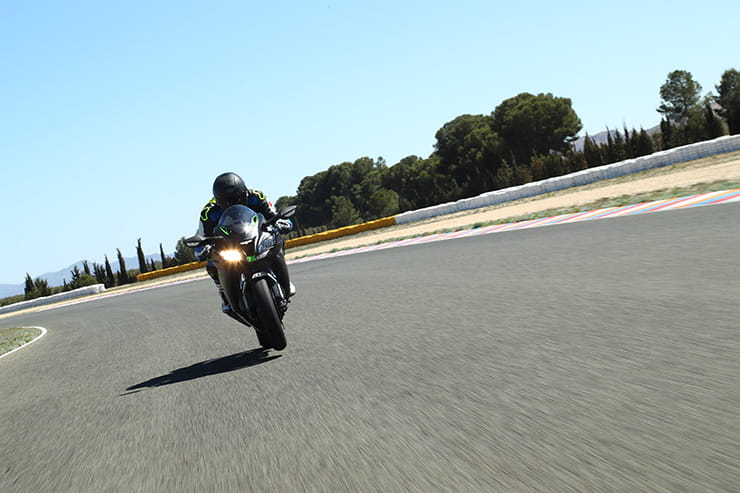 Three things I loved about the Kawasaki ZX-10R SE…

• Over the front race geometry

• Doesn't have the RR engine

• A new colour LCD/ TFT dash would be nice. 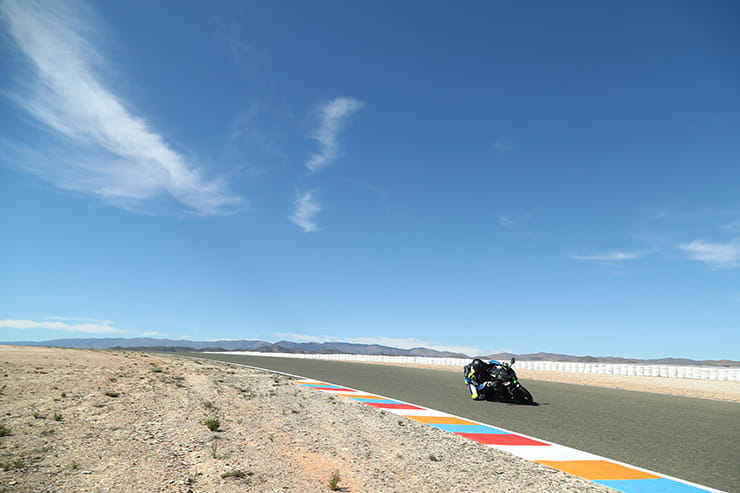 Last year we tested the bike in our three Japanese Bike Shootout riding both on the road and on track.

For more information about this bike and the rest of Kawasaki's range, click here.