The new ZX-10R road bike could be set to dominate this year’s open-class shoot-outs in much the same way that Kawasaki’s mean green four has ruled World Superbikes of late, if the sensations from its debut at sultry Sepang are anything to go by. The revamped-for-2016 Ninja ripped round the Malaysian circuit showing not just fearsome speed but also fantastic agility and stopping power.

Whether it was screaming out of turns with its front wheel held just off the track and its rear slick kept in line by ultra-refined electronics, carving through the turns with an outstanding blend of agility and solidity or slowing hard due to the ferocious bite of Brembo’s M50 Monobloc calipers, the Ninja felt quick, controllable… and bang on the pace.

That’s not surprising because the link between this latest streetbike and the ZX-10R on which Johnny Rea dominated last season’s WSBK title is unusually direct. The new roadster has been developed in close conjunction with Kawasaki’s factory race team. Many of its key engine and chassis mods reflect those introduced to the factory bike during the last three seasons, following feedback from 2013 champion Tom Sykes and his crew chief Marcel Duinker.

The Ninjas lined up in the Sepang pit lane looked very similar to the outgoing model, differing mainly in having a slightly more protective fairing, pointier tailpiece, and a reshaped silencer made from titanium instead of black-finished aluminium. But almost all the engine and chassis parts are new, and designed to improve performance, especially on track. 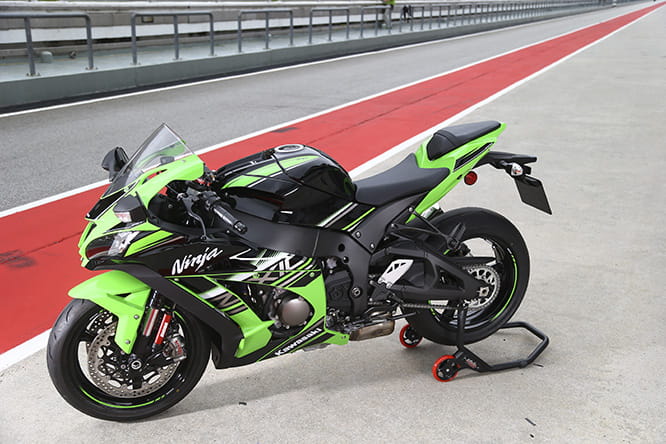 Sykes and Duinker’s key request for the engine, after commencing their development program on the 2011 model at the end of that season, was reduced inertia; both to help the bike rev quicker and to allow more rapid changes of direction. Kawasaki’s engineers delivered a 20 per cent reduction, largely via a lighter crankshaft. While they were at it they added new camshafts, and a host of lighter internals including clutch, primary gears and Teflon-sided pistons.

They also developed a 20 per cent bigger airbox and a new exhaust system which combine with the revamped injection and electronics to let the Ninja become the first open-class superbike to get through Euro 4. Largely for that reason it produces an unchanged 197bhp (or 200PS, suggesting the max is also political) at 13,000rpm, and weighs a few kilos more, with a kerb figure of 206kg.

Sykes’ main aim with the previous model’s chassis was more forward weight bias for better front-end feel and agility, which led to the racebike being tweaked to impressive effect – as winning two of the last three world titles confirms. The 2016 model now gets similar mods: a new frame that brings the steering head closer to the rider, plus a longer and more rigid swing-arm that shifts weight forwards. 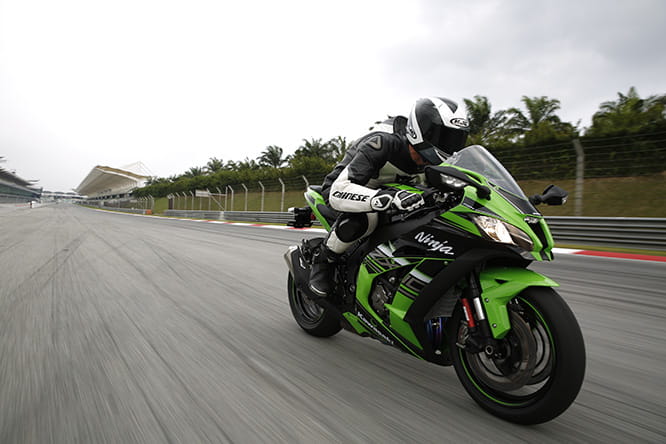 The chassis is also updated with new Showa suspension that incorporates race-developed technology: Balance Free front forks that separate springs and damping reservoirs, and a BFRC (Balance Free Rear Cushion) shock that is smaller and lighter than its predecessor. The front brake gets a serious upgrade, involving larger, 330mm diameter front discs gripped by Brembo’s M50 calipers, with a radial master cylinder adding to the high-level spec.

And the electronics package is comprehensively updated, now incorporating an IMU that combines Bosch hardware with Kawasaki’s own software. There’s a significantly more refined traction control system, three riding modes (full power, plus two softer options with 80 or 60 per cent max), a three-way adjustable launch control for quick getaways, a two-way adjustable engine brake control, and a quick-shifter that works on up-shifts only. The dashboard is also revised and more comprehensive, still blending digital speedo with a tacho bar along the top of the unit. 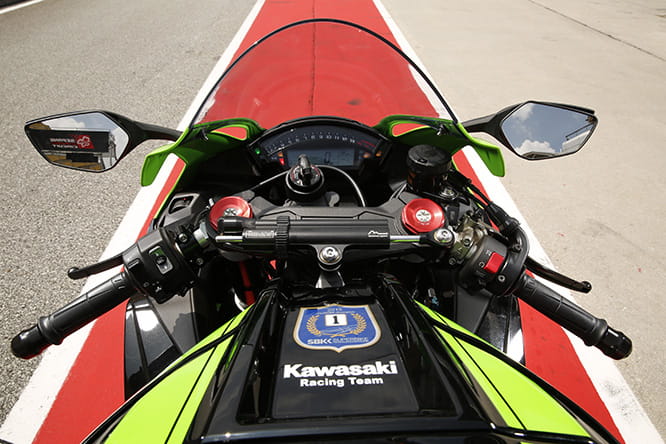 The bikes in Sepang were mostly the green-liveried KRT (Kawasaki Racing Team) Replica version of the Ninja, which costs £13,799 against the standard, grey model’s £13,649. There were also a handful of black-finished bikes with Akrapovic silencers, like the limited-edition Winter Test Edition, although the launch machines had a full Akro system instead of just the can, plus mirrors and pillion pegs removed. Apart from the first session all the bikes wore slicks and had the ABS disconnected, which can’t be done on the stock machine. Kawasaki say the anti-lock system works in corners but is not identical to the Bosch system used by Ducati’s 1299 Panigale. 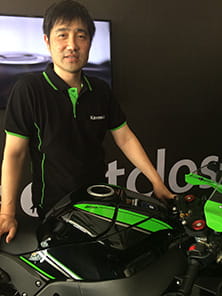 Project leader Yoshimoto Matsuda’s aim with this ZX-10R had been to make it “easy to ride – because a bike that is easy is also fast”. And after setting off on a green standard bike it didn’t take me long to discover that it’s just that, by 200bhp superbike standards at least. The Kawasaki was instantly, breathtakingly rapid, yet its confidence-inspiring chassis and electronics made relearning the tricky, barely remembered circuit surprisingly simple.

A lap of Sepang ends with two longish straights, one preceded by a tight right-hander and the other, the pit straight, by an almost-as-tight left. The ZX-10R was stunningly fast and impressive through the whole section, its sophisticated traction control – which Matsuda insists gives a level of finesse that rival systems can’t match – allowing improbably fierce acceleration at severe lean angles, then keeping the front wheel skimming the track rather than reaching for the sky under brutal throttle abuse.

By the end of each straight the Kawasaki was revving hard it fifth gear at somewhere around 150mph, from which point it braked down to almost 100mph less with outstanding force. Not only did the blend of giant discs and M50s supply ferocious power with great feel, but Matsuda’s aim of allowing the rider to sit quite low in the bike, although the centre of gravity is contrastingly high to improve agility, has paid off by making that stopping power relatively easy to exploit.

I’m tall and quite heavy (6’4”, 87kg) and in that first session found the bike getting a bit squirrelly under hard braking as the rear tyre lifted under the deceleration allowed by the superb ABS and super-sticky Bridgestone R10 front tyre (fitted for the launch instead of the standard RS10). A mere quarter-turn of extra compression damping on the super-sensitive forks cured that for the next session. And a touch more compression damping on the shock prevented the bike squatting under acceleration, making its already light yet impressively stable handling even more precise. 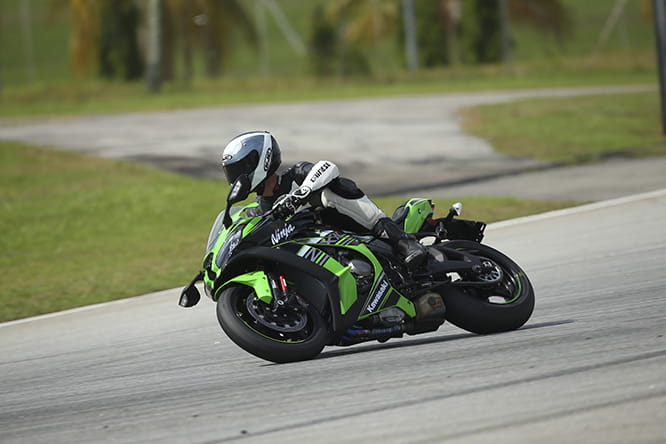 The ultra-stiff yet compliant chassis did a brilliant job of making the Ninja easy to ride – at least as easy as an open-class superbike could ever be in energy-sapping Malaysian heat and humidity. It was impressively stable, the electronic Ohlins steering damper doubtless helping prevent more than a hint of head-shake while I shifted my weight while exiting one uphill right-hander. And it flicked from side to side through the first, slow-speed chicane with great composure, especially after I’d turned off the KEBC engine brake control, which seemed to make the bike slightly more keen to run wide into the bumpy, downhill hairpin.

We didn’t try the launch control but the rest of the updated electronics package was excellent. After a while I put the traction control on its least intrusive of five settings, and it allowed an indecent amount of throttle abuse, just once letting the rear tyre (we were on Bridgestone slicks for most of the day) step out slightly, without approaching a high-side. The quick-shifter also worked smoothly although there’s no auto-blipper to allow down-shifts, unlike some rivals.

If the powerplant had a less impressive aspect, for road use more than the track, it was perhaps that although gruntier than the previous model it was still not particularly responsive below about 7000rpm. Combined with the unchanged and still tall first gear, this meant the ZX didn’t leap out of Sepang’s numerous slow bends quite as hard as some rivals including BMW’s S1000RR would have done, despite its very crisp and glitch-free throttle response.

But it was certainly far from sluggish, and probably stronger low down than Yamaha’s YZF-R1, which Kawasaki’s figures show having a more pronounced noise dip in its torque curve at about 6000rpm. And its addictive surge through the midrange was followed by a stunning stream of smooth power as the motor howled to 13,000rpm or more through the gears. 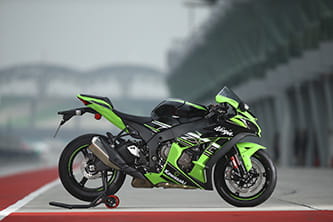 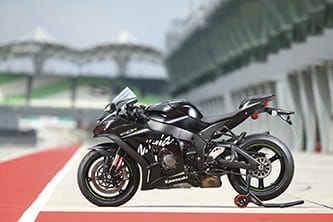 The black Ninjas that we also got one session on were even faster and more entertaining, thanks to an Akrapovic system that added about 10bhp and came with race-kit ECU that incorporates an auto-blipper. That bike also had a glorious raspy exhaust note and stronger low-rev grunt to an increased top-end that had the bike well into top gear by the end of the straights, and its rider glad to be able to tuck in behind the slightly more generous fairing.

When riding one bike in isolation on a launch it’s always very difficult to tell how it will compare with its rivals, especially when they’re as fast and evenly matched as the current open-class crop. But after six sessions in the Sepang heat it’s clear that Kawasaki’s efforts in World Superbike have resulted in much more than all those race wins, Superpoles, fastest laps and championships.

That race development has also directly benefited this production Ninja, making Kawasaki’s claim that at Portimao it’s two seconds a lap quicker than the previous model – and also significantly quicker than its main rivals – very believable. It’s deliberately track focused, lacking the heated grips, cruise control and semi-active suspension options that make some rivals more versatile. But Kawasaki’s contender is the most clearly race-bred superbike, and that top-level track experience has helped shape a stunningly fast and refined machine that will be very hard to beat. 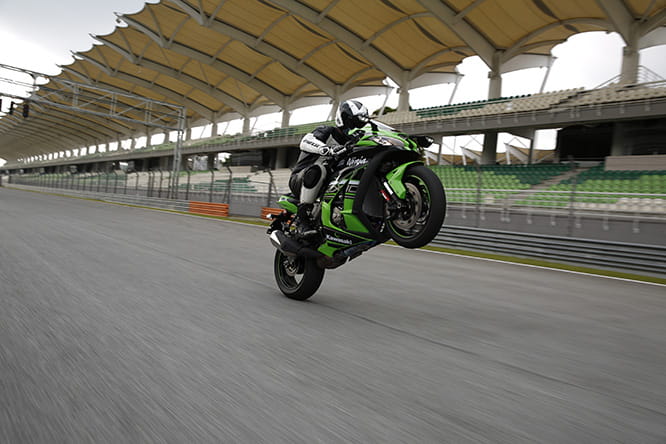