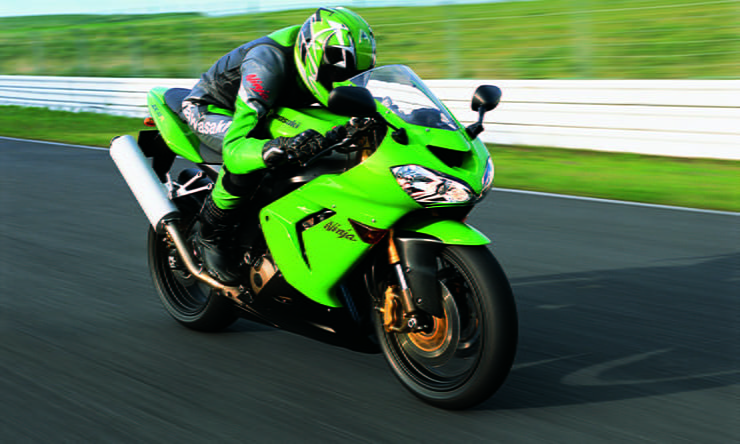 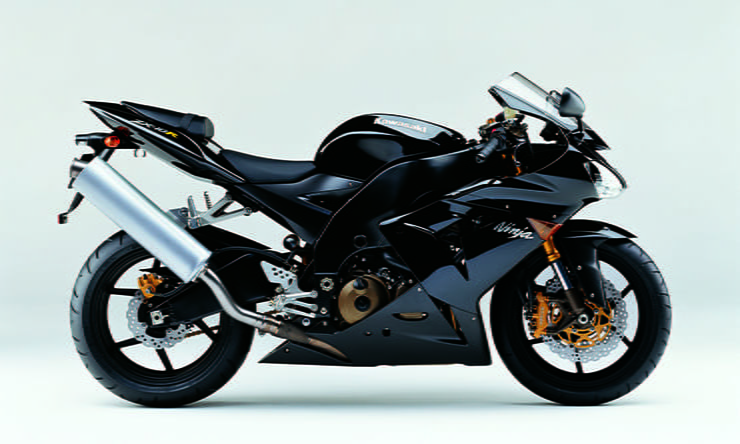 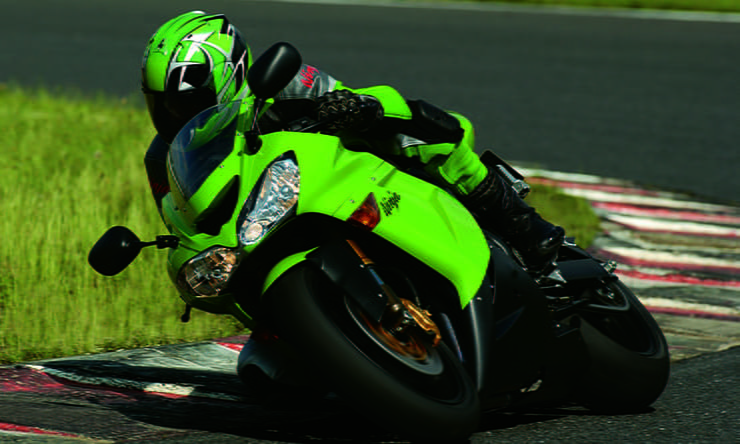 Having rightly been accused of producing a lackluster model range in the late 1990s and early 2000s that was devoid of any of Kawasaki’s traditional wild side, in 2004 the firm fiercely responded by launching the Ninja ZX-10R. Wild, often unpredictable and packing a serious punch, the Ninja was a trademark Kawasaki sportsbike that split opinions. Some loved its outrageously aggressive character, others were downright scared of it! Whatever your point of view, there was no denying Kawasaki were back in the big-capacity sportsbike game with the hair-raising 2004 Ninja ZX-10R… 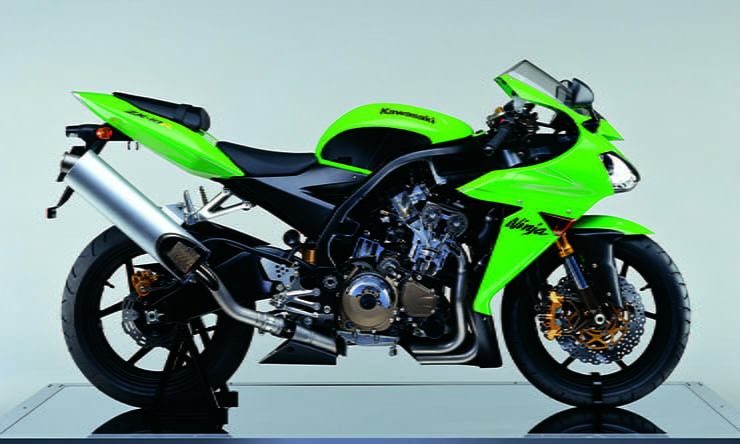 Banishing memories of the outdated ZX-9R (which even had a fuel tap and carbs!), Kawasaki went back to the drawing board with the ZX-10R and designed a ground-up new motor. Boasting a 998cc capacity through a 1mm bore and 4.1mm stroke increase when compared to the ZX-9R, the ZX-10R’s engine was also designed with a one-piece cylinder/crankcase to make it both lighter and more rigid within the chassis where it acted as a stressed member. Internally, the motor featured forged flat-top pistons that upped its compression ratio to 12.5:1 and improved combustion while titanium valves and lighter forged steel camshafts and a weight-saving exercise on the whole valve train saw outright power and quick revving take precedence. And it worked, the Ninja made a claimed 172.6bhp with 84.4ftlb of torque, making it the most powerful litre bike in 2004 - by 0.6bhp over the new YZF-R1… However when you add in the effects of RAM-air, Kawasaki claimed these figures were upped by another 10bhp. A new fuel-injection system was mated to the motor and boasted 43mm throttle bodies with two throttle valves per cylinder and 12-hole injectors for a finer fuel spray to improve combustion. The Ninja also featured a ‘stacked’ gearbox with close ratios, magnesium engine covers and a slipper clutch as standard. Kawasaki certainly didn’t hold back. 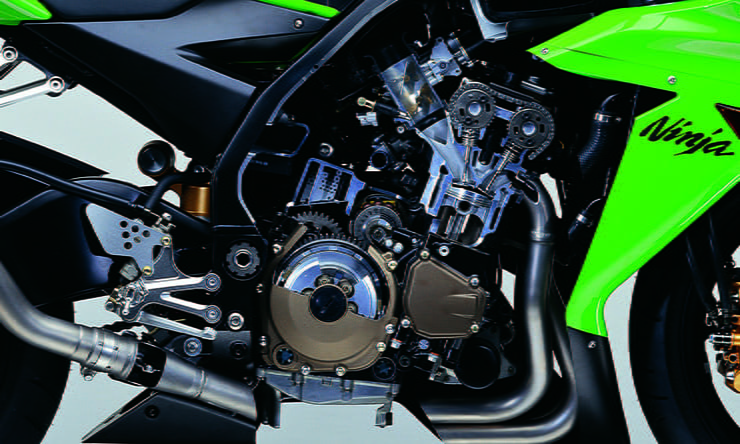 Back in 2004, if your new litre bike didn’t have ‘MotoGP-tested technology’ you were behind the curve. True to form, Kawasaki claimed the ZX-10R’s new aluminium chassis used technology gained from the ZX-RR MotoGP bike… By combining cast and pressed aluminium sections, Kawasaki claimed to have created a lightweight frame with maximum strength. The Ninja’s headstock area is cast and features a duct that runs through it for the RAM-air system and the swingarm pivot section is also cast as these areas require the most strength. These two cast sections are then joined by frame rails that are constructed from pressed aluminium that was then welded together and finally welded to the cast areas to create the frame. Impressively, Kawasaki claimed the ZX-10R’s frame was actually 15mm narrower than the ZX-6R’s! The swingarm was also constructed from aluminium and like the units on modern sportsbikes was designed to be extra long for improved rear grip and reduced wheelies. Not that it worked on that score! 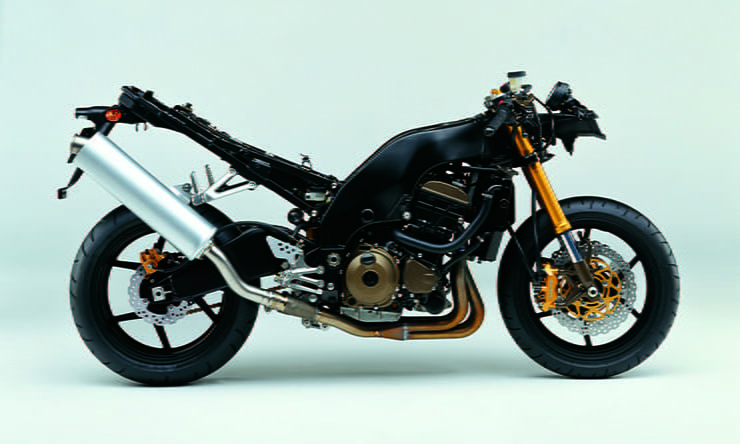 The Ninja came with the latest suspension technology in 2004 with 43mm fully-adjustable inverted forks and a fully-adjustable monoshock. According to Kawasaki, the ZX-10R’s new ‘H-spoke’ design allowed the use of a thinner rim, reducing the overall weight of the Ninja’s wheels.

True to form (and fashion) the Ninja boasted four-piston Tokico radial calipers, however Kawasaki added their own spin with the ZX-10R also featuring petal brake discs. Claimed to improve cooling and prevent warped discs on track, their smaller 300mm size also made the Kawasaki’s stoppers lighter than its rivals. The rear is a 220mm petal disc with a single-piston caliper. 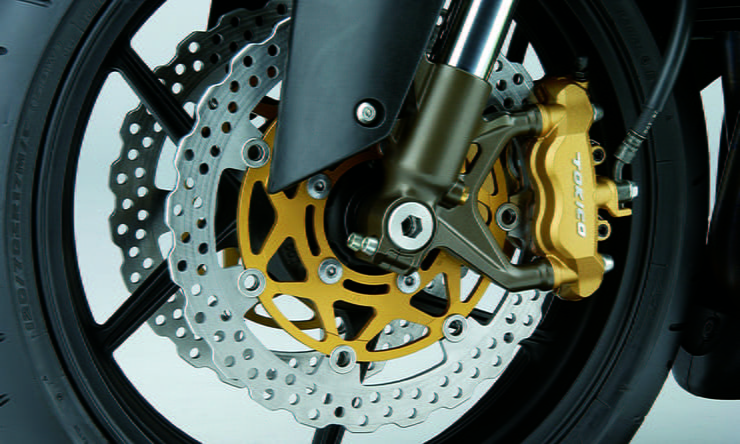 Only Honda with their electric steering damper were pushing the electronics boat out in 2004 and instead Kawasaki focused on raw mechanical horsepower. The Ninja got an LCD dash (the same unit as the ZX-6R used) that housed a lap timer and shift light, but that’s the only electronic gadgets riders got to play with.

Due to its compact size, the Ninja has a fairly focused riding position. Maybe not as extreme as a modern litre bike such as the R1, but still not the most comfortable of ergonomics and certainly not one for relaxed touring. It’s a sportsbike and works on track or going banzai, not in a congested city! 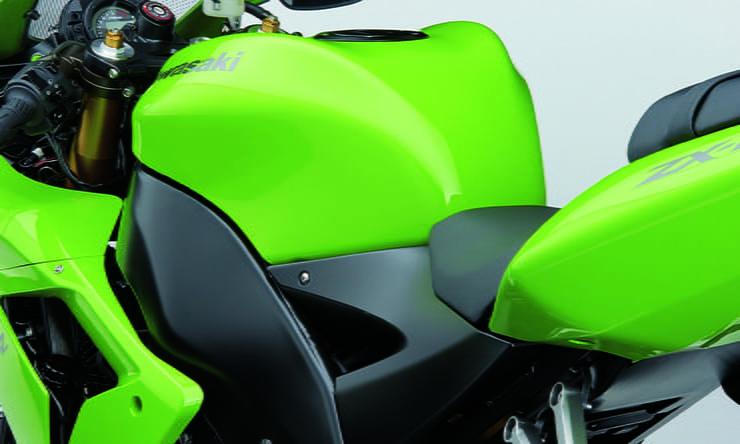 A small pad, no grab rails and a claimed 172bhp! Only brave pillions should apply… 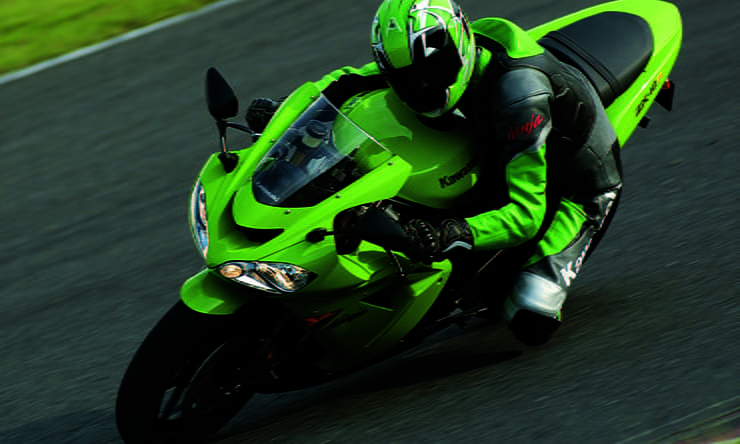 As a replacement for the dated ZX-9R, Kawasaki loaded the ZX-10R with a serious arsenal. Wavy-discs, hefty broad-beam frame, styling that said ‘trust me if you dare’ and an engine that shouted ‘look out’ world. On paper alone the ZX-10R looked unbeatable. What Kawasaki didn’t count on was the racing and the fact that the world and buying public had switched on to usable performance. Tractable engines that would pull in the midrange to make the switch into searing top end power a smooth one. The ZX-10R had a searing 180mph top end. End of story.

But then Kawasaki saw fit to install this monster engine into a chassis that had the steering rapidity of a Scalextric car and a short wheelbase. This was literally race bike handling for the road. Not made any easier by suspension that was set up so firm it made the likes of Donington Park GP circuit seem rough. This was the primary reason why the Kawasaki shook its head, and bucked and weaved its way around the UK countryside and occasionally into it.

What Kawasaki failed to tell most owners was that the ZX-10R was set up for race track duty straight from the packing crate. And most owners didn’t believe, or were too stupid to know (those who buy bikes because they’re the latest ‘must have’) that suspension works both ways. Yeah, most of the evil handling traits could be ironed out with a softening of the suspension or buying a quality rear shock and tweaking the front. Only the dedicated trackday fiend plumbs for revised rear shock linkages to alter the movement ratio. A quality steering damper tidied the job completely.… 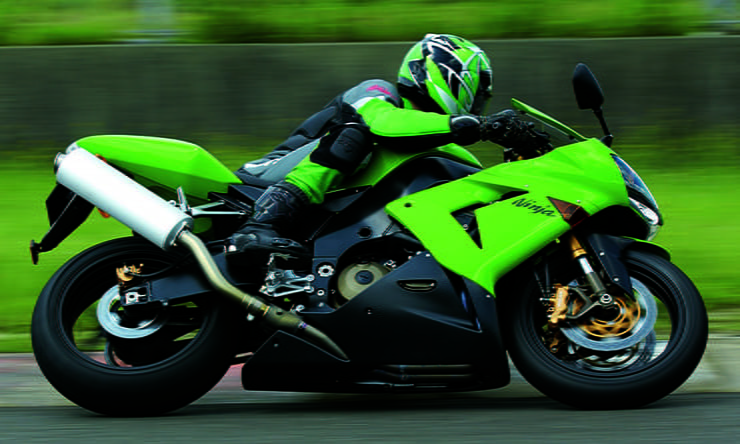 Yes, the Ninja delivers a wild old ride. Yes, it will occasionally throw in a good old headshake to keep you on your toes. And yes, it is far from a relaxing ride as a result, but the 2004 ZX-10R is the epitome of what makes Ninjas that little bit special and is why a certain group of riders will always buy the green bike. If you want a machine with raw aggression and spirit, buy a Ninja, not a Fireblade…

Nowadays this original bad boy of the litre bike class is still a enthralling ride. It may be about 40bhp down on modern tackle, but you are dealing with a ferocious engine that lacks any electronic neutering in a chassis that has track-handling right at its core. In this context, few litre bikes deliver the kind of adrenalin thrill that you get on an original ZX-10R. If you like your litre bike to feel like a full-on beast, and every now and then give you a little scare, few are a raw as the 2004 Ninja ZX-10R. A brilliant bike for making your pulse race and a small bit of wee occasionally escape into your leathers… 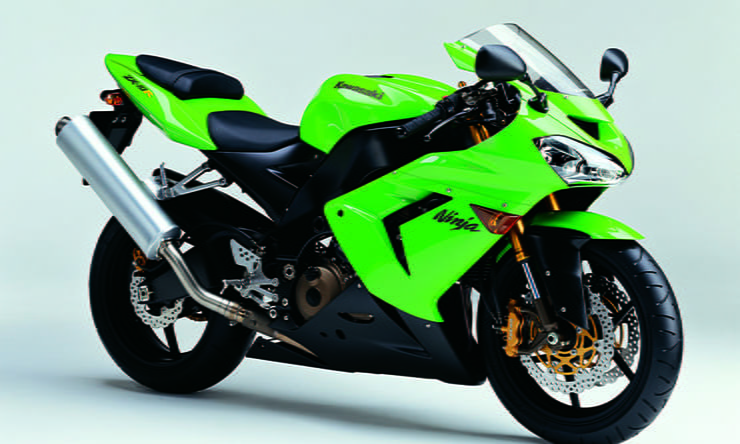 The ZX-10R was aimed at track riders and as a result a lot find their way onto circuits, so always give the bike a very close inspection for crash damage. Be extra wary of sticker that may hide scratches on the fairing (or an aftermarket fairing), frame protectors and suspiciously fresh parts such as pegs etc when the rest of the bike is tired. Give the fork lowers and swingarm a very good look for scrapes and check for any touch-up paint. If it hasn’t been down the road, the next issue is corrosion.

Build quality isn’t very high on the Ninja and the paint on the engine flakes off while the calipers are very prone to both corrosion and seized pistons. Always get the front of the bike off the ground and while you are checking the head bearings for play, look for warped discs and listen for sticking pistons. And while you are inspecting bearings, check the suspension linkages as they also like to seize if not regularly stripped and regreased. Now onto add-ons…

Be very, very wary of a quickshifter on a ZX-10R as the gearbox is a bit weak and these can exaggerate any wear. If the owner has fitted a steering damper (a lot do!) then check it doesn’t interfere with the bike’s turning circle or catch on the bike’s paint work. Tail tidies do make the bike look better, but the indicators may not pass an MOT and also watch out for cheap aftermarket levers – do you want to ride a 172bhp bike with a brake lever made in China and bought on eBay for next to nothing? Next up are the bike’s mechanicals.

Road riders are never going to stress the Ninja’s motor, so they are generally quite reliable if a little rattly. The occasional reg/rec goes down and so do generators, but that’s almost a consumable item on a bike as old as the Ninja. A few ignition barrels have also given up, but again this is rare. If the bike has a race can fitted (it probably will) see if the fuelling has been matched to suit and if it has that’s a good sign of an owner who understands what a bike needs rather than just wanting it to sound loud! Finally, if it has a replacement shock that’s a great sign as the OE unit is pants and a source of much of the Ninja’s wayward handling… 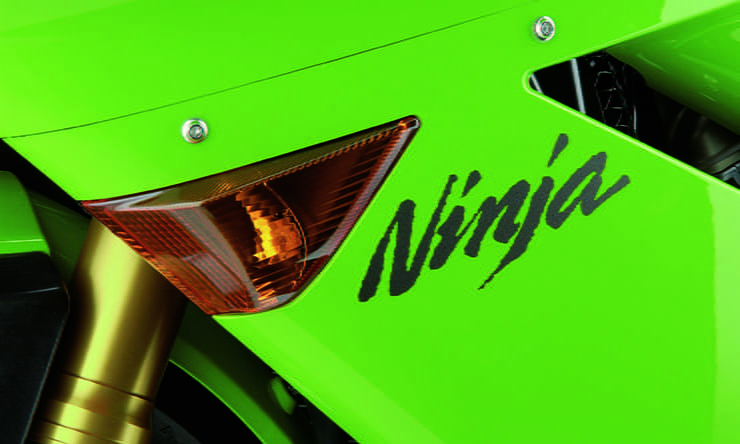 The Ninja was updated in 2006 to the ‘wheelbarrow’ model with its twin underseat pipes. Responding to owner’s criticisms about the wild nature of the Ninja, Kawasaki calmed their beast down through a new chassis and a motor that featured a heavier flywheel. Fat, a bit ugly and lacking any real bite, this model never appealed to Ninja purists and is, rightly or wrongly, regarded as the worst of the Ninja generations. That said, it did manage to win a WSB race… In the wet…

The original ZX-10R is on the cusp of being viewed as a collector’s item, but at the moment prices are still reasonably low. Although green bikes always go for more than black or blue ones! You can pick up a high-mileage 2004 Ninja for in the region of £3500, but spending just £500 more will secure a lower-mileage bike in a decent condition. The most you should pay is £5000, but that would be a lovely stock bike in green with an OE exhaust and low mileage. Prices for the updated ‘wheelbarrow’ model are lower than the original bike, so you may want to consider buying this generation and spending a few quid on sorting its faults!