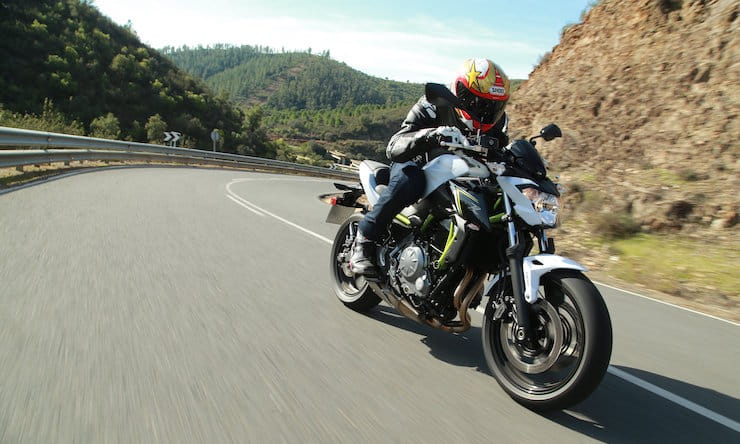 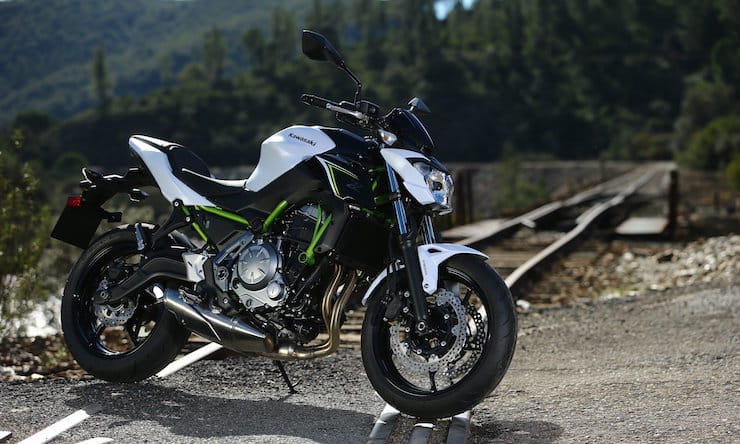 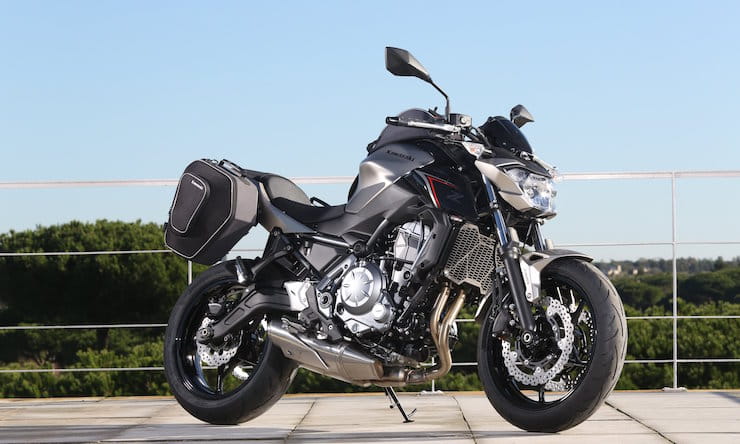 The new Kawasaki Z650 may bear more than a passing resemblance to the outgoing ER6-n it replaces in 2017, but that’s a good thing, and definitely no coincidence.

Kawasaki has sold 121,161 examples of the ER6-n since 2005. Even more remarkable is the new Z650 is set to be the best-selling Kawasaki model in 2017 already, with some 12,036 already ordered by dealers throughout Europe.

That’s big numbers in anyone’s order books, so it’s no surprise Kawasaki haven’t reinvented the ER6-n concept totally, they just given it a bit more Zest and a new Z badge, a new chassis, tweaked motor and new styling.

Kawasaki are keen to make a big deal of the Z650 being back in the range, they even had one at the press launch owned by the same owner from new for 41 years.

Though the original Z650 was an inline four-cylinder and the new Z650 is a twin, the design ethos of the bike sits well within Kawasaki’s Z-range and spirit. Okay, so the ‘Refined Raw’ marketing buff may be stretching the truth a bit on a 649cc, friendly 67PS twin, we’ll leave that to the new Z900. But, from a marketing point of view it makes a lot of sense to connect the entry-level Z to the bigger Z900, new Z1000 and the smaller Z300. Interestingly, Kawasaki’s long history of Z models mean there has been more than 50 bikes badged Z since 1972.

The new Kawasaki Z650 is a nimble, lightweight naked twin with a Euro 4-friendly 649cc motor making a claimed 67bhp and weighing in at 187.1kg with ABS.

It has quite a job to beat the faithful and much- loved Kawasaki ER6-n that it replaces. But when was the last time a firm made a new version of an old bike that was worse? Bimota maybe, but nobody proper.

The outgoing ER6-n, which the new bike bases its parallel twin engine on, made 71 of your finest British horsepowers, this new Z650 makes 67.07bhp.

Euro 4 meddling means we’ve lost a few peak horses, but generally the whole motor has been redesigned and refined for better real world throttle response and ride ability. It doesn’t rev as high as the ER-6n either but overall it’s much nicer day-to-day.

We rode the bike in Spain for some 260km in a day, and found it lovely and friendly to ride with a good handling chassis.

It makes a claimed 55mpg too. And that’s important in this middleweight market where power and top speed are less important than MPG. We had it doing around 53mpg most of the day, and 50mpg under some pretty hard riding at the end of the day. With a less aggressive throttle jockey, that gives a real world range of 211 miles, which is mighty.

Like the mpg, this bike is all about stronger low and mid-range performance for real world everyday riding.

Using new cams, a new slimmer airbox, 36mm throttle bodies, new injectors, a new transmission, new cooling system and new exhausts and headers all contribute to a new, smoother and more refined engine. There’s also a slipper clutch, to help ham-fisted riders but also to make the bike easier to ride for novices, and more advanced riders sure to be attracted by the Z’s sexy new styling.

It now weighs in at 187kg, some 19kg lighter than the world-renowned novice-friendly ER6-n. 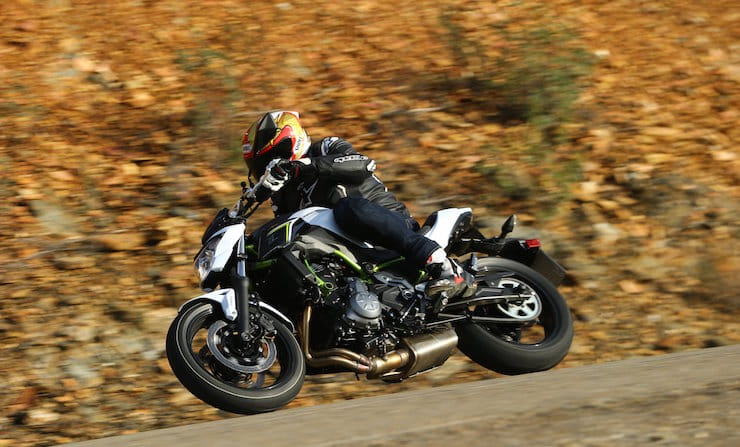 With an all-new steel tubular chassis incorporating a centrally-mounted shock instead of the side-mounted ER6 shock, a retuned and tweaked Euro-4 friendly parallel twin motor taken from the ER6-n and a low, low 790mm seat height it’s a dead easy to ride, yet fun small bike for new riders.

Kawasaki say this bike is aimed at novice and intermediate riders both male, and female. And from the moment you sit on it you can see why. The seat is incredibly low, even our resident Bike Social short tester Paul Taylor would be able to get both feet firmly on the ground. It’s way narrower at the back of the tank than the old ER6, and feels light from the off. incredibly so in fact. And the new slipper clutch is one of the lightest I’ve ever tried. The bars are wide and flat, the footrests just high enough but friendly at the same time for a semi- sporty riding position.

The pipe tucks away neatly under the bike, there’s a big set of centrally mounted clock with digital rev counter, LED screen and the basics you need – a clock, a fuel gauge, range, average MPG, a gear-shift indicator, temperature, adjustable shift light, and of course a speedo.

The brake and clutch levers are span adjustable, there’s a neat and expensive Z-shaped rear light which is a really nice touch on a £6099 motorcycle. The paint finish is quality, the fit of the panels is excellent, and it feels a lot more luxurious than its price may suggest. Being frank, it needs to be as there’s some stiff competition in this class.

In my opinion it looks more aggressive and modern than the admittedly cheaper £5700 Suzuki SV650, and the Z650’s styling now brings it bang up to date with its other big rival, the Yamaha MT-07 at £5886. Though let’s be clear here that we understand the Yamaha’s price is set to increase in 2017, but hasn’t yet been finalised.

It rides quite differently to the ER6-n too. The biggest thing you notice is the weight of the bike and how narrow it feels.

By some kind of Kobe magic, Kawasaki say the swingarm is now 2.5kg lighter, and the tubular steel chassis itself, developed using the same in-house analysis technology as the range-topping supercharged H2R, weighs some 15kg lighter. It adds up to a total kerb weight of 187kg.

For interest, the Yamaha MT-07 makes a claimed 74bhp and weighs 182kg, the SV650 weighs 197kg and makes a claimed 75bhp. My gut says the SV650 may still have more punch, but it’s going to be an interesting group test when we get the bikes early next year.

In the real world, the Kawasaki feels super light. It carries it well and is incredibly nimble at low speeds. Go faster and the bike is stable, yet can get into a corner with confidence. The Dunlop Sportmax tyres don’t install the most confidence at high-speed, and take a lot of heating up, but most of the time they’re okay once warm. 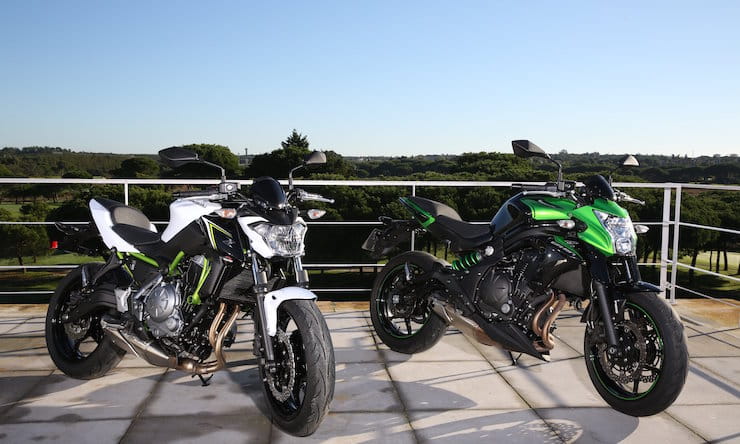 The handling is neutral and although it’s happiest at normal speeds, more experience riders will be happy to know it can get a lick on too. The gearbox is slick, positive and light and the suspension feels plusher than the sometimes harsh feeling of the ER6-n.

It runs fairly soft as standard, and there’s no adjustment front or rear, but most of the time it’s good. On some of the bumpier Spanish roads, the bike coped with them mid-corner and didn’t send me offline.

Around town it soaks up speed bumps and pot holes and I’d go as far as saying it’s much better damped than the Yamaha MT-07, perhaps the Yamaha’s only real fault.

It’s easy to ride, easy to manoeuvre or turn around in the road and generally feels like a perfect first or second bike. But if you were to get one early in your riding career, the bike has plenty of legs to hang on to for a while.

There’s no screen but wind protection is good up to around 90mph, and the seat gave me no complaints over some 160+ miles.

There’s nothing complicated with it. It’s just a decent chassis, a decent engine and sexy styling that makes it look much more like a big bike. There are no power modes to complicate things, no traction control, just a decent ABS system that does exactly what it’s meant to do.

The motor itself sounds good on the charge, and around town it’s quiet and chugs along. Newer riders can take higher gears and the bike will take it with little chain slap. Out of town it pulls cleanly from 4000rpm on the motorway and is generally happier in a gear higher than the older bike, you just don’t have to rev it so hard any more.

Annoyingly there’s a bit of vibration bang on 6000rpm in top at 120kph, or 74.5mph back home. But ride a few mph faster or slower and it disappears. The motor has a nice rumble to it and plenty of grunt. The new Z is an easy going, easy to ride and a blinding first or second bike.

The standard bike costs £6099 and is available to order now. But if you fancy a sportier version then Kawasaki are offering a Performance Edition at £6999. It features an Akrapovic pipe, a short instruments screen, a tank pad and a pillion seat cover.

Other accessories including a tank bag, screen, and panniers and crash bungs are also available to turn the bike into more of a tourer.

Thanks to Kawasaki for inviting us to test the Z650 and to Double Red Photographic for the top photos. 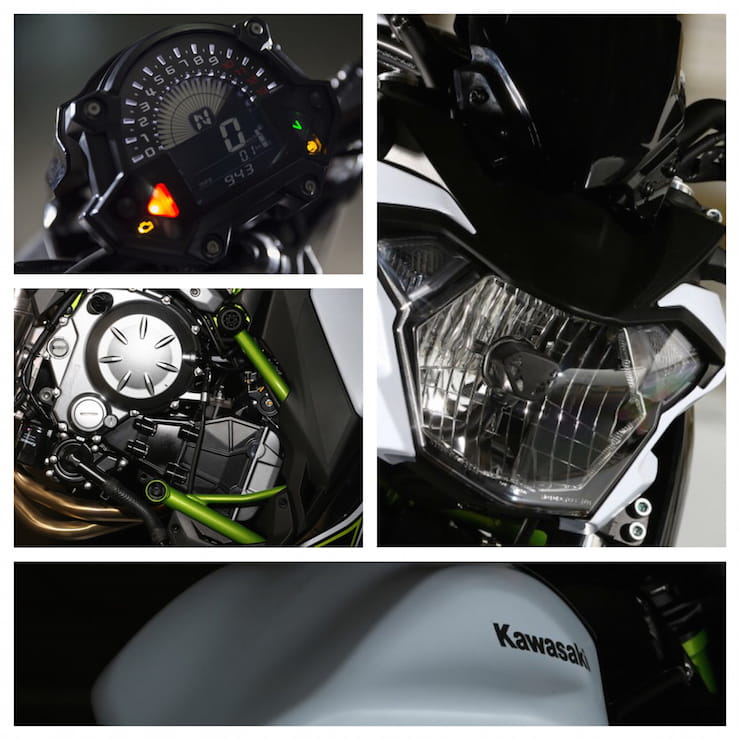