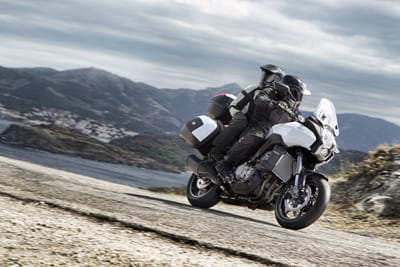 If we said Kawasaki was jumping aboard the adventure bike boom would it bother you? It doesn’t bother us because we now know the Versys 1000 is a perfectly good bike in its own right. It follows the same path as the multi-role Versys 650 as well as being keenly priced, and is a realistic option to, say, the powerhouse Ducati Multistrada or a full-scale adventure bike like the KTM 990 Adventure.

Sticking to what it knows best, Kawasaki has endowed the Versys with the same engine that powers the Z1000 range. It’s a four-cylinder four-stroke reworked to deliver a barrow-load of torque in the low-mid rpm position and less top end power output. It works.

The engine delivers ample fluid shunt just off tickover through to 7500rpm. This is perfect stuff to make light work of corners and overtakes without disturbing the gearbox. On mainland Europe’s motorways, 90mph cruising is still effortless. At UK maximum speed the engine is hardly working and never gives off the twee vibes that surface in the Z1000.

So, styling-wise the Versys is a bit boxy for an adventure bike, but then it is only an adventure bike in essence. The wheels are normal road-going 17-inch and can accommodate the wide range of tyres available today – we are talking durable touring to the stickiest sports compounds.

Thrown in with the Versys’ £9,499 asking price is expensive goodies. It has ABS as standard, traction control and a very intelligent two-way power control mode. It’s all tried and trusted technology that is derived from other Kawasaki models.

It also has the comfort of an adventure bike. The upright screen, wide handlebars, low pegs and comfy seat all gel to give the impression of sitting on a well abused sofa. Plus you get the benefit of some fresh air blowing against your legs. Well, maybe not a benefit in winter but in summer on European mainland it will be.

Kawasaki has done its homework and made the Versys 1000 an affordable and extremely usable alternative to the likes of BMW’s R 1200 GS. If you’re not bothered about the badge, then you should look very closely at the Versys 1000 – and the accessory Akrapovic silencer because the standard item is big and ugly – and the only bad thing about the Versys 1000.