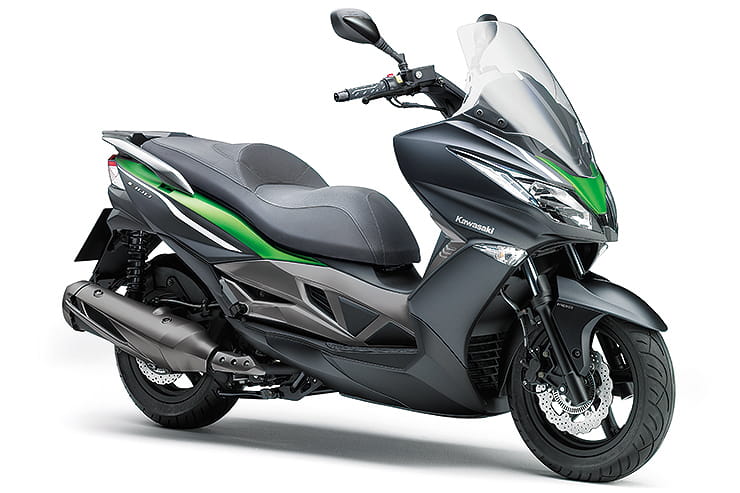 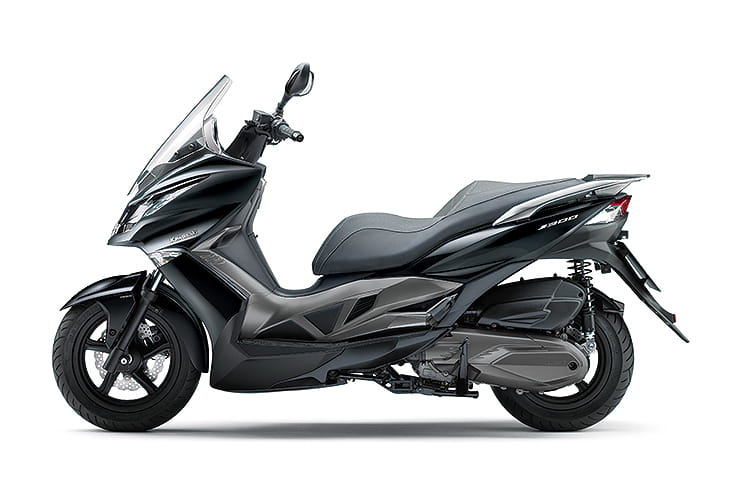 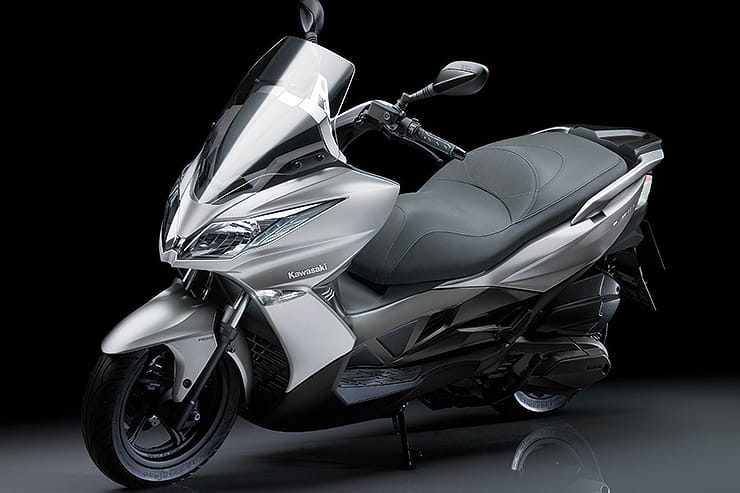 Kawasaki’s first foray into the European scooter scene arrived in 2014 in the shape of the J300. Although is it really a Kawasaki model? Built in conjunction with Kymco, and heavily based on the Taiwanese firm’s Downtown 300 model, the J300’s styling is all down to Kawasaki but in truth almost everything else is Kymco. Is that a problem? If you want a city scooter with a bit of attitude when it comes to its looks yet all the reliability and fairly low price tag you get from a far eastern model, the J300 should be right up your street.

You are always going to pay a premium for the Kawasaki name on the fairing and its sharper styling yet back in 2014 the J300 was only about £50 more than the Kymco equivalent in stock trim. If you wanted ABS you needed to fork out an extra £400 while the SE model was £100 more for basically green paint. Nowadays the gap has increased and a 2014 J300 starts at £2500 for a well-used (in the small capacity scooter world this means in the area of 10,000 miles) model where a similar vintage Downtown is £2000. A really tidy J300 is roughly £3000-£3500 and you can pick up a pre-registered model with 1 mile on its clocks or an ex-demo with minimal miles for £4000. There is little premium for ABS models over non-ABS when buying used.

The J300 may use the same fairly basic single cylinder motor as the Downtown, however the Japanese firm’s engineers developed their own ECU for it and it is actually a little bit peppier than the Kymco as a result. A peak power of 27bhp is certainly acceptable but it is the 28.7 lb-ft of torque that actually surprises you because you don’t expect a small capacity model to have such an impressive mid-range. You can even top 95mph if you try hard. Downhill. With a following wind.

The J300 is powered by a 299cc SOHC liquid-cooled single cylinder motor, which in all honesty is a fairly run of the mill engine and as a result has very few issues. Servicing is required every 3000 miles or six months, which is a bit of a pain as at 3000 miles the valve clearances should also be checked. In reality very few bikes do 3000 miles a year, so generally you are talking one service a year at a cost of roughly £250, which is a bit steep. A lot of owners do the fluids themselves, which isn’t a tricky job, and only send it in for a proper service at the 3000-mile intervals. If at all! The CVT system is pretty much what you would expect and seems to have few issues, so there is little to fear there. A few owners grumble about the exhaust rusting, but as a replacement aftermarket system can be found for £250 (used OE items are £120 on auction sites) this isn’t too much of an issue and it is mainly a cosmetic issue rather than actual holes. 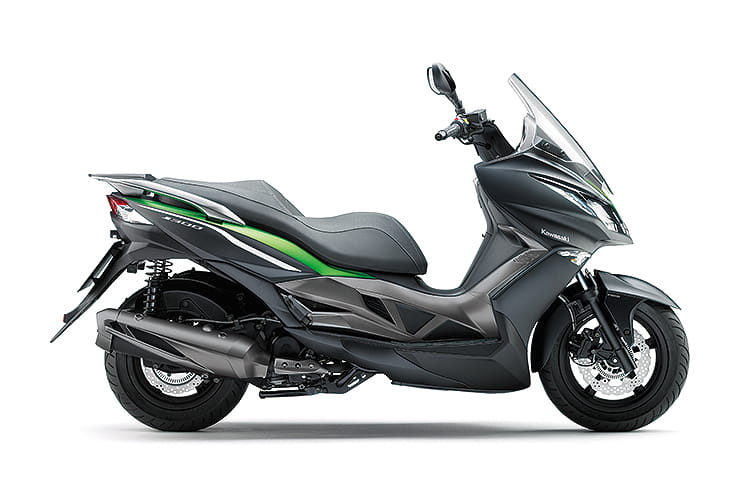 Kawasaki claim the J300 should be good for 80mpg, which is probably correct if you stick within a city’s streets however take it into the open countryside and this figure drops into the 60s, so expect to average roughly 70mpg. That’s not too bad at all and alongside its cheap insurance helps off-set the high service costs.

Tipping the scales at a slightly porky 191kg the J300 is an agile city scooter that is far from intimidating and is actually great fun to ride and very balanced at low speed, which is exactly what you want in such a bike. Although the front suspension lacks any adjustability, you can up the preload on the twin shocks by five stages to help compensate for a pillion or a load of junk stuck under the seat. Speaking of which... Despite an LED light and an impressive amount of underseat storage (Kawasaki claim you can fit a full-face lid and an A4-sized briefcase), owners do get a bit hot under the collar when it comes to the J300’s storage compartment. The hydraulic ram that holds the seat open comes under criticism for not allowing you to fully access the compartment and the locks seem to be prone to failure, which is a shame. The glove box (which isn’t lockable) contains a 12v socket, which is good.

Initially sold with ABS as an optional extra (it is standard fitment on later models), at a quick glance the Kawasaki trademark petal discs front and rear do make a good impression and add to the J300’s sporty character. However owners are less than impressed by their level of bite and while ok in a city environment, when you need some real stopping power the single disc set-up is left a bit lacking despite the braided steel brake lines, so adding uprated high friction pads is a good idea. As they are a sliding caliper design, corrosion on the slider is an issue, however rebuild kits are very cheap and it is a relatively simple job to do at home. Pleasingly, both brake levers are adjustable in their span. 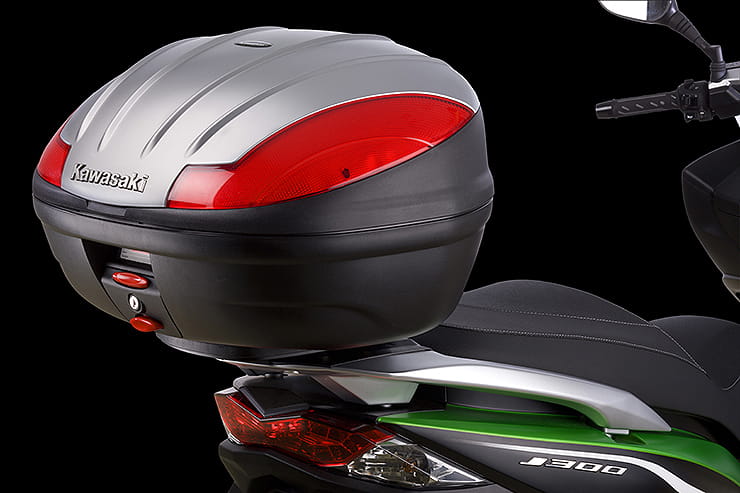 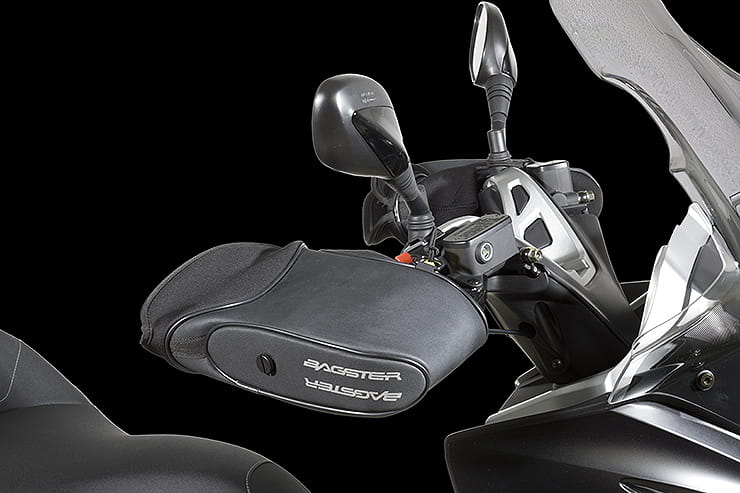 You are unlikely to do much in the way of touring when it comes to a J300 and Kawasaki deliberately gave it a smaller screen than found on most scooters to enhance its sporty look. That said, the seat is very comfortable and the riding position nice and relaxed. It’s a comfortable commuter with a pleasingly contoured seat but not a bike you would want to spend all day on.

In terms of rider assists you get ABS and that’s it, unless you include the LCD dash, which has a fuel gauge. If the underseat storage and cargo hook aren’t enough for you in the way of storage, Givi make three sizes of top box (S,M,L) for the J300 which were sold as official Kawasaki extras and can be coded to the ignition key. Other companies also make boxes for the bike but just be aware you need to replace the rear carrier with an accessory bracket to make some boxes fit. Taller screens are popular as are heated grips and replacement exhaust end cans but generally that’s about it aside from a scooter apron or handlebar muff.

The middleweight scooter market is quite crowded and it is nice that Kawasaki actually spent a bit of time ensuring the J300 stands out, which is certainly does. Is it worth spending a premium on over the Downtown or a Chinese-built equivalent? We’d say so as it is a cool looking bike and more desirable as a result and its bigger capacity motor helps it fend off Yamaha’s X-Max 250, although the 2017-onwards X-Max 300 is a better overall bike that even has traction control.

Three things we love about the J300… 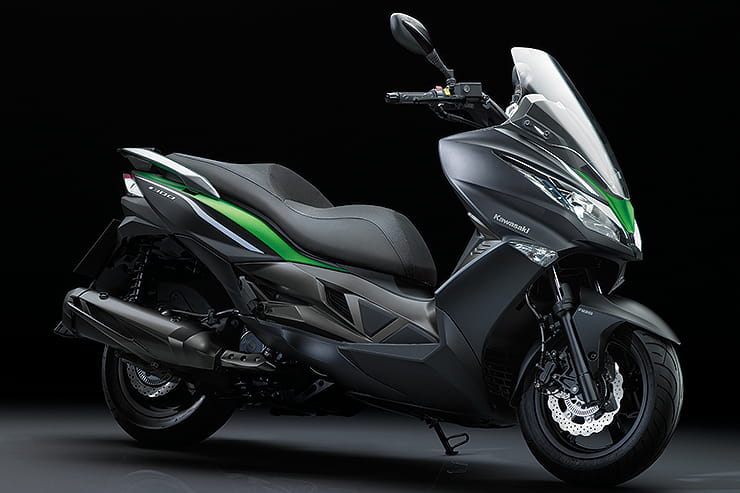 Looking for scooter insurance? Get a quote for this motorcycle with Bennetts motorbike insurance