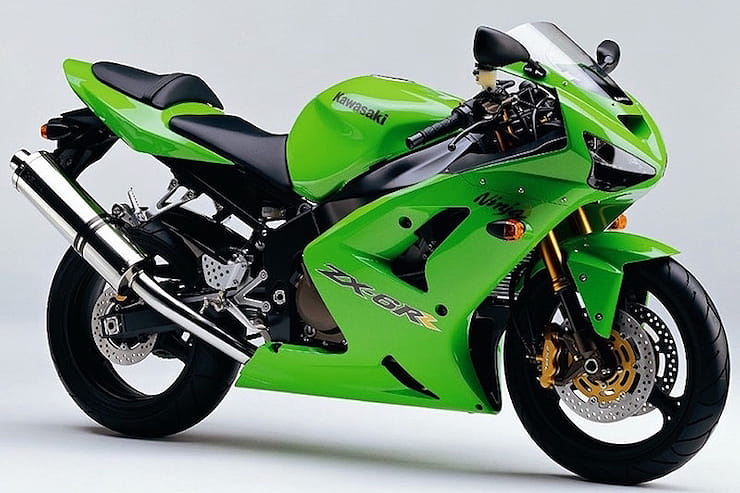 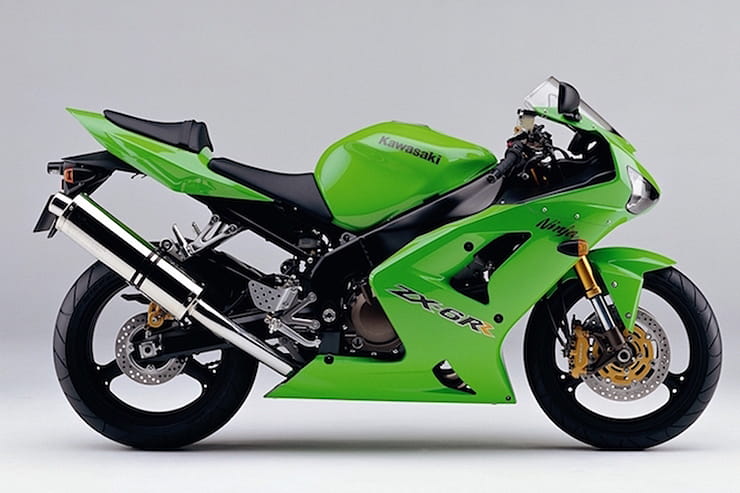 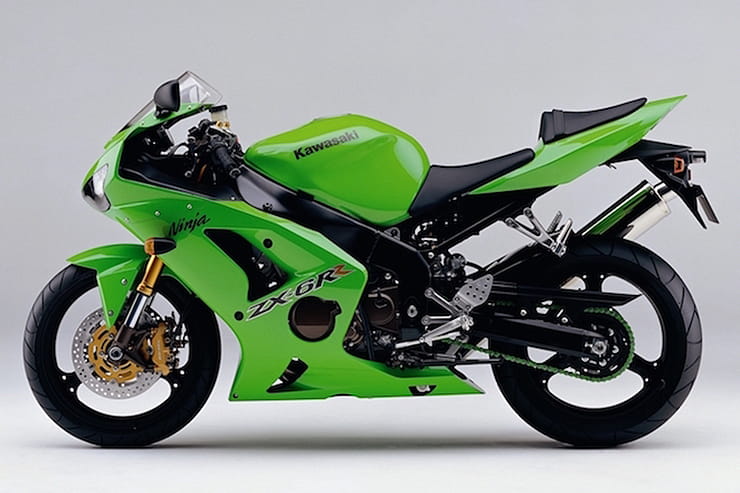 The 2003-2004 Kawasaki ZX-6RR (or ZX-6RR K1 to give it its full designation) is the 600cc, racing homologation version of the Japanese firm’s already radical and extreme 636cc ZX-6R B1H and as such is a rare, extremely track-focussed and fairly exotic machine. That said, it’s not actually as fast and powerful as its larger capacity brother nor as exotic as, say, Ducati’s SP versions of its superbikes. In addition, few made it into the UK, most of those ended up on track and fewer still survive as road bikes today. Find one, though, and they’re about as exclusive, race-orientated and sweet handling as Japanese supersports bikes get and can be reasonable money, too.

When launched in 2003 the RR cost around £8000, or £1000 more than the already advanced and impressive ZX-6RB1H which itself debuted inverted forks, radial brakes and more. That extra grand got you a race-eligible 599cc engine in place of the B1H’s 636, slipper clutch, adjustable swingarm pivot, close ratio gearbox and a subtle ‘RR’ sticker on the fairing – but that was it. Racers apart, then, the RR had limited appeal at the time to road buyers and with only 50 imported into the UK in 1993 few survive today. Dealers quite often don’t appreciate what they are and, where the B1H is a very popular used buy, the K1 isn’t and costs about the same if not less. Find a good one, though, and you’ll have true racing exotica in a pint-sized package that is unlikely to cost much over £4000. 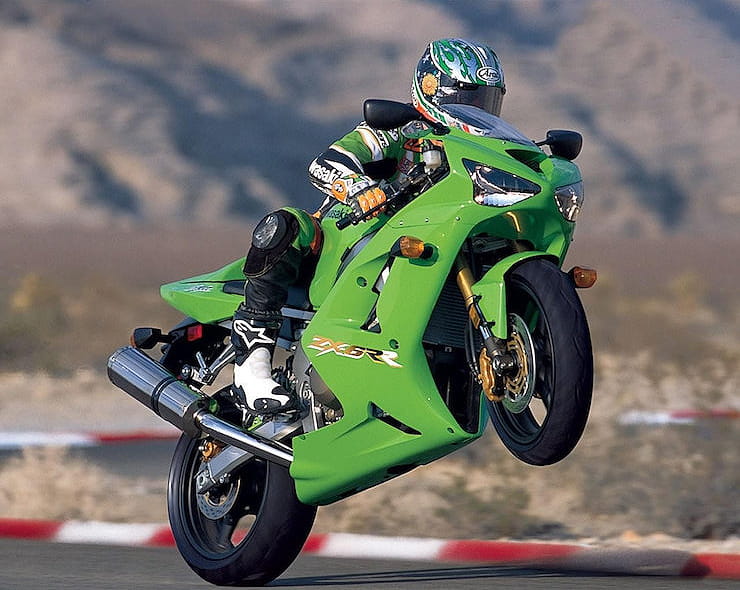 A race bike with less power than its road brother is the crux of the ZX-6RR story but shouldn’t put you off entirely. To be fair the 2003 ZX-6R wasn’t the first Ninja to be 636cc – that honour went to its previous incarnation. This time round, however, Kawasaki wanted to compete in Supersport racing and so required a 599cc homologation special to be eligible, hence the ZX-6RR K1. However, despite some racing tricks, the smaller engine resulted in power being reduced by 5bhp and torque also being lower by 1.5lb.ft. For racers, this didn’t matter: a comprehensive race kit was also available which pushed peak power to 140bhp. But road riders spotted that, despite the homologation special tag, the RR was not only slower than the stock bike, was more expensive and compromised for road use.

The revised liquid-cooled, DOHC four is a short-stroke, ‘oversquare’ version of the 636 unit displacing a true 599cc capacity as required by the racing regulations (although it’s unlikely many racers stayed this way!) and boasts a close ratio gearbox, forged pistons and a slipper clutch. The rev limit was also increased by 200rpm and the compression ratio upped to 13:1 thanks to these changes. The 4:1 exhaust is unchanged although track versions and even any road survivors are almost certain to have been fitted with an aftermarket item by now. As with other bikes in this class, the engine is basically solid but considering its stratospheric redline and track tendencies it’s almost certain to have been thrashed. Not a problem if maintained properly but signs of excessive track use should lead to close examination. 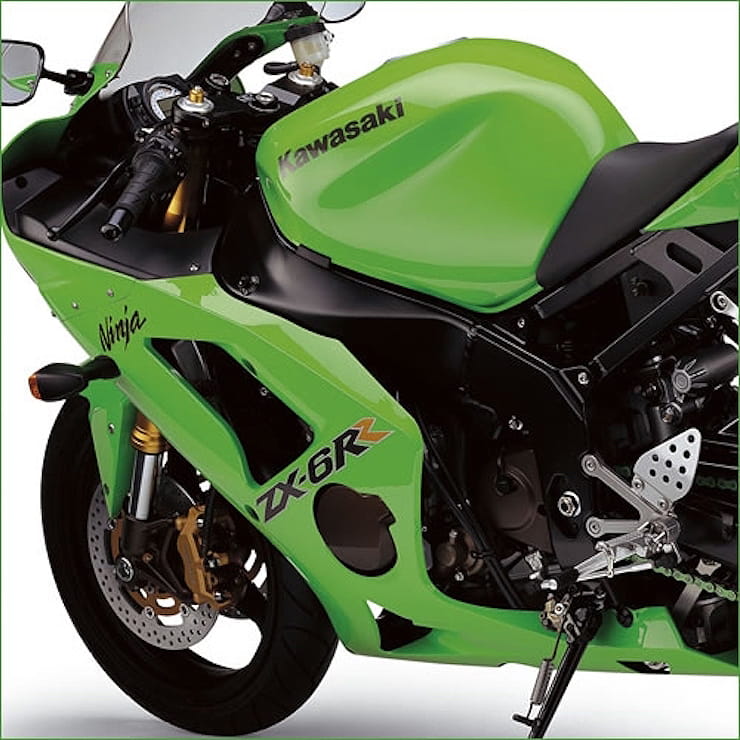 Not really what the ZX-6R is all about, and certainly not in this even higher revving, RR trim. Even average use will see a return barely troubling 40mpg and sustained hard or track behaviour can have it significantly worse than that.

Now you’re talking. The all-new 2003 ZX-6RB1 had already moved the supersports game on significantly thanks to its ultra-aggressive and stumpy dimensions. With a wheelbase of just 1400mm and rake and trail figures of 24 degrees and 85mm respectively, production four-cylinder sports bikes had never before been so scalpel-like while quality, multi-adjustable suspension front and rear, featuring the also new (for a 600) inverted front forks was another step forward although the rear shock is sometimes criticized for being a little harsh. It was among the lightest in the class, too. The RR/K1 version moved things on – but only slightly. While slightly lighter still at 161kg dry, its suspension and geometry was unchanged, although it did feature an adjustable swing arm pivot point. 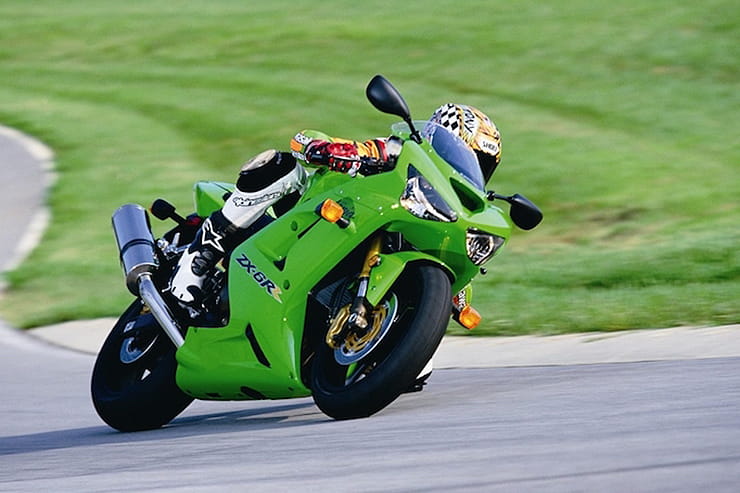 The 2003 ZX-6RB1H’s brakes were also pioneering – being the first to feature the new radially-mounted Tokico calipers – and these were carried over to the homologation special RR/K1 version. They gave class-leading power and feel at the time, too, although they have been known to stick if not serviced properly and track use will reveal a healthy appetite for brake pads. Also check for worn or warped discs.

The standard ZX-6RB1H was the most uncompromising, track-orientated supersports machine yet built so, unsurprisingly, the RR/K1 version takes that even further – although with only slight changes that’s not by as much as you might expect and mainly manifested by a motor that demands even more revs. All of that means, of course, that it’s fairly compromised as a road machine, particularly if covering touring distances. The riding position is extreme and cramped, there’s little protection from the elements unless you fold yourself into a full-on racer crouch, not much consideration for comfort and less by way of luxury – and don’t even think about luggage or pillions. All that said, however, once you get to some twisty, exciting roads, few bikes are more fun.

The 2003 ZX-6Rs are two more bikes from the pre- Ride-by-wire’ age so predate modern electronic rider aids such as traction control, wheelie control and so on – in fact there’s not even ABS. What you do get on the homologation special RR, however, is a fairly rudimentary ‘slipper clutch’. Standard equipment includes a fairly minimal (for lightness), single ‘dial’ LCD display which includes the novel feature (for the times) of a lap timer – told you it was track-orientated. Equipment, for such a focussed track bike, is pretty minimal while aftermarket accessories are generally limited to performance or track items such as exhausts, rear-sets, crash protection and so on. There is a forum dedicated to ZX-6Rs – www.zx6r.com – which is a great source of information on faults and fixes as well as which go faster bits work and which don’t. While www.colchesterkawasaki.co.uk/ is the home of MSS Kawasaki, who have a vast experience of getting Ninjas to go very fast indeed and when it comes to dyno or tuning work should be your first port of call. 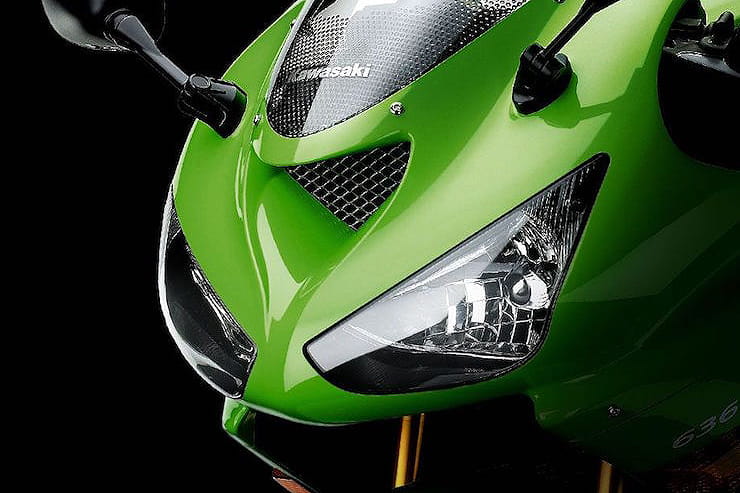 The 2003 636cc Kawasaki Ninja ZX-6R B1H was a revolutionary bike in many ways and the 599cc homologation special based upon it, the ZX-6RR K1 was born, although actually less powerful, less road relevant and more expensive, certainly adds exclusivity and exotic allure. With so few RR’s today surviving on the road decent examples are hard to find and, for most, you’d be better off with the B1 version. But if you do come across a K1, particularly if it’s not been too abused on track and is in decent condition, you’ll be in the presence of a rare beast indeed: true, supersport-sized, Japanese exotica (and who can think of another example of that?) which is also unlikely to be any more expensive than its standard sibling and remains one of the most focussed 600-class sportsters ever built.