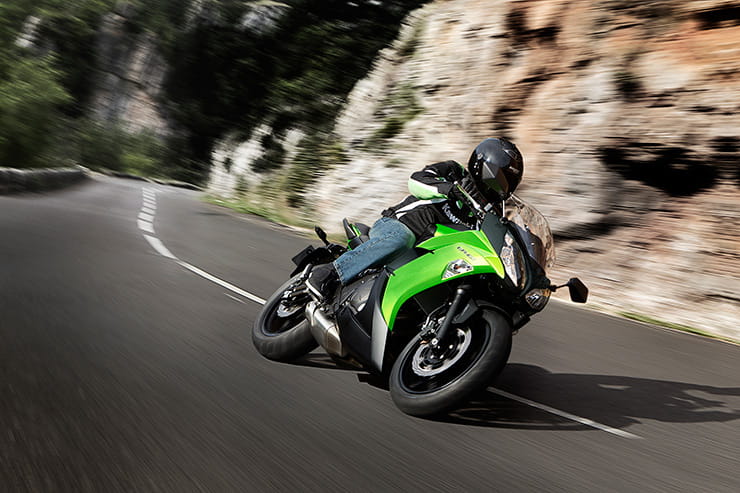 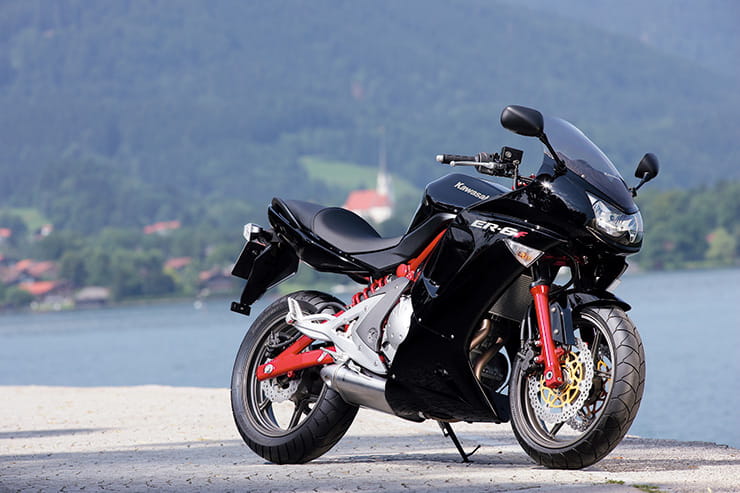 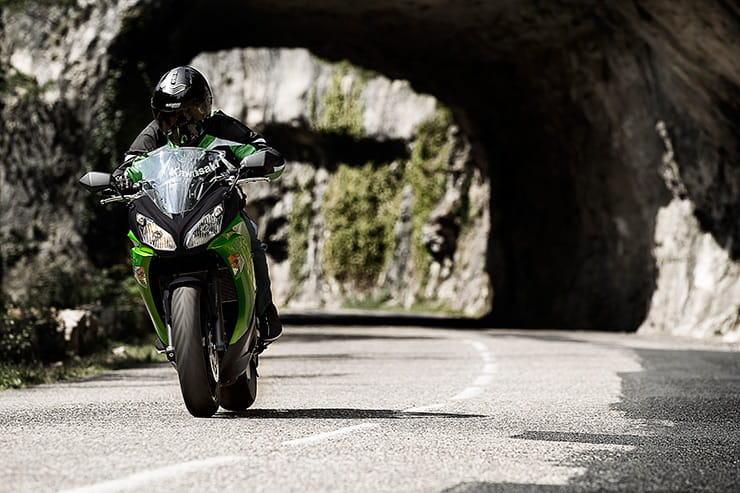 The ER-6f is a no-frills faired middleweight that comes with a fantastic parallel twin motor, reasonably effective fairing and a bargain price tag. This excellent commuter is a perfect first ‘big’ bike or just a great value winter hack. Charming, easy-going and stacks of fun with light and agile handling, the ER-6f is a real star of the used middleweight world. Did we mention it is also very cheap? 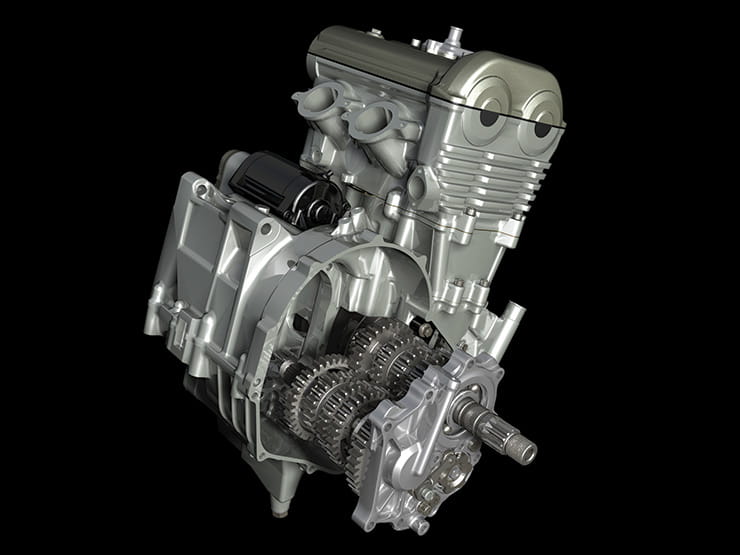 Kawasaki went down the parallel twin route well before Yamaha unleashed the hugely popular MT-07 and picked this format as they felt an inline four motor was too wide while a V-twin was too long. They wanted a compact, yet powerful engine and the 180-degree parallel twin with its triangular layout of the crank and transmission shafts ticked all the right boxes.

With a capacity of 649cc, the ER’s engine is actually physically smaller than the ER-5 motor, which is impressive. Liquid-cooled and boasting double overhead cams and 8-valves, the ER’s engine was designed for mid-range performance and as such was armed with large 38mm throttle bodies with sub-throttles to deliver the required performance characteristics yet also retain a smooth throttle response. In addition, the ER runs a wide 83mm bore, again giving it lots of lovely grunt rather than just top end power. This architecture proved the ER’s masterstroke and Kawasaki even tuned the exhaust by optimising its route so it not only passed new Euro3 emissions laws, its design also significantly boosted the ER-6f’s mid-range. 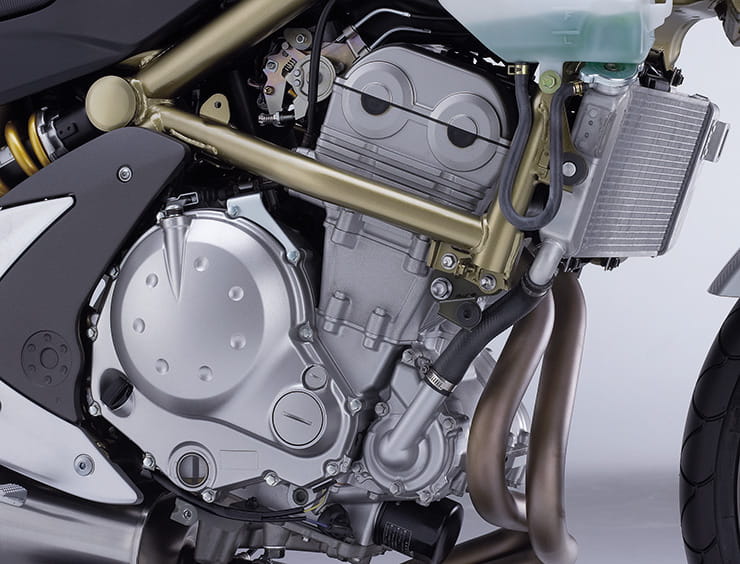 Amazingly enough, the ER-6 has dominated the Lightweight class at the TT since the new 650cc regulations were drawn up in 2012 and bikes have gone on to top 120mph average laps of the TT course. Yeah, it’s fair to say the ER’s chassis is pretty bloody good! Thanks to the compact nature of the motor, the ER’s high tensile tubular steel trellis frame is very short and allows for a long swingarm, giving the ER agile handling as well as stability at speed. In addition, the narrowness of the twin also ensures the bike’s ‘waist’ is slim, effectively reducing the seat height as the rider’s legs are closer together. Cleverly, the steel swingarm’s bracing runs in a direct line with the frame and shock, adding strength to the chassis through its triangular layout as well as looking pretty cool! Pleasingly, the chassis even has four tie-down points for luggage. The ER-6f’s chassis was updated in 2012 to a new double-pipe perimeter style chassis (the main visual difference is no frame rail running over the motor) while the subframe is a ‘backbone’ design, allowing for a slimmer tail with a reduced seat height. 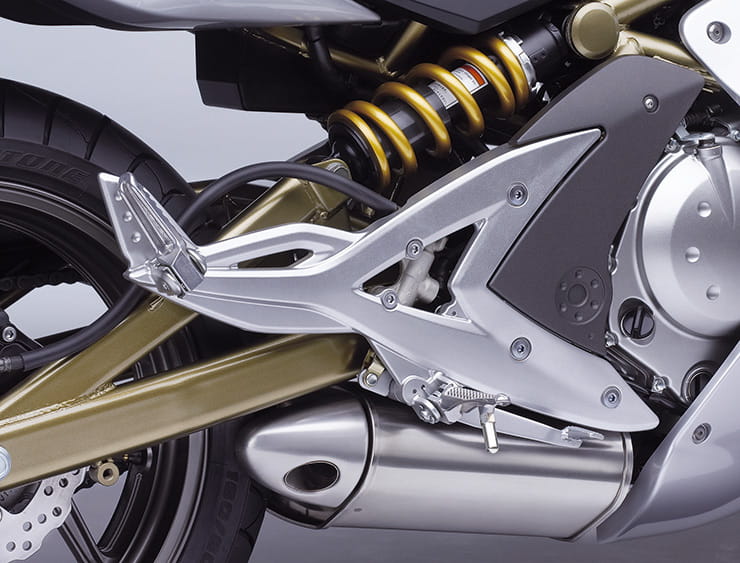 The ER’s off-set shock not only looks good, it also has the added benefit of allowing Kawasaki to relocate the bike’s battery to the area a conventional shock would sit, helping them reduce the ER’s seat height. To be fair, the ER’s standard suspension is fairly budget with the 41mm telescopic forks having no adjustment and the shock only adjustable for spring preload, but it works well enough. The 2012-onwards models feature extra stroke with a 15mm gain in the forks and 5mm in the shock. 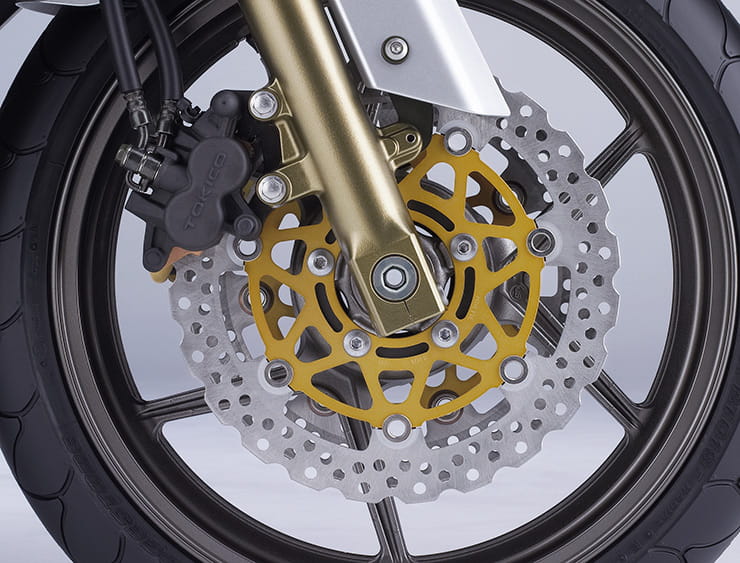 As with the suspension, we are talking fairly budget items when it comes to the ER-6f’s two-piston floating calipers, but they do have the firm’s trademark 300mm petal discs, which is a cool feature. The rear caliper is a single-piston unit that grips a 220mm petal disc. ABS was an optional extra on the early ER-6f models.

The ER-6f’s twin analogue clocks are a bit basic but supply all the necessary information and a fuel gauge is included. The 2009-onwards generations add a bit of extra bling with a digital dash, but that’s about as flash as the ER-6f’s electronics get… 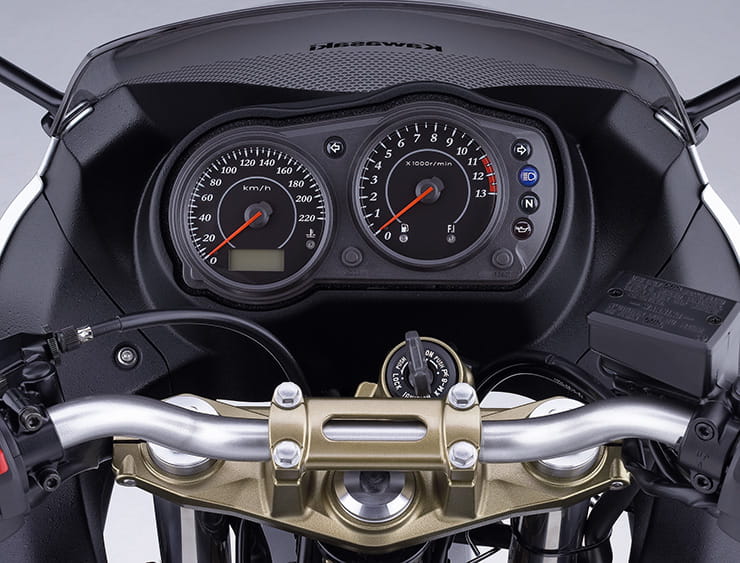 The ER-6f may be ‘sporty’ in its outlook on life, but the riding position is far from compromised and instead of clip-on bars, the f gets a similar set-up of single bar to the naked ER-6n. It’s a comfortable bike (even more so if you buy the updated 2012 model with its extra padding in its seat) and taller riders need not be afraid of the little Kawasaki being too cramped for them. The low seat height is also very reassuring for newer, shorter or less confident riders. 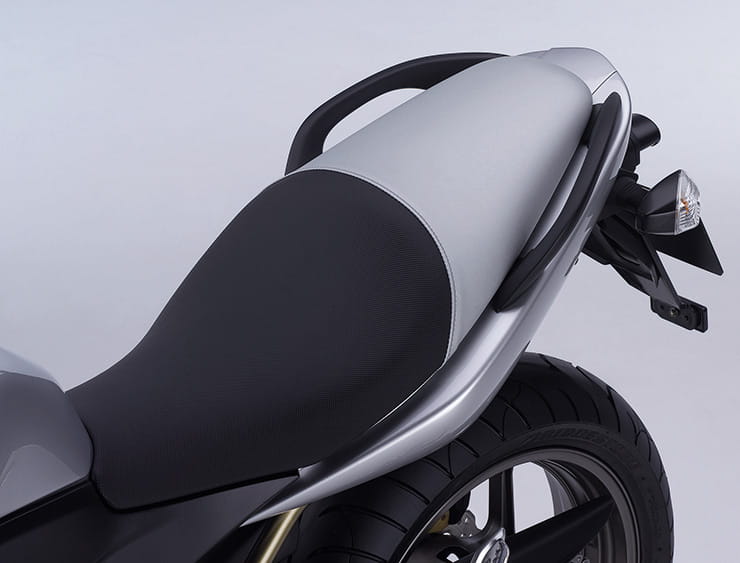 If as a pillion you prefer to get close to the rider, the original model’s single rider/pillion seat will be better for you, however the post-2012 bike with its split rider/pillion seats are more comfortable thanks to extra padding. Overall, the ER is a decent pillion bike for medium distance work (grab rails come as standard) and its parallel twin motor is happy to take the extra weight, however its suspension does suffer slightly. If you are serious about distance work, it may be worth considering a Versys 650 instead of the ER-6f. 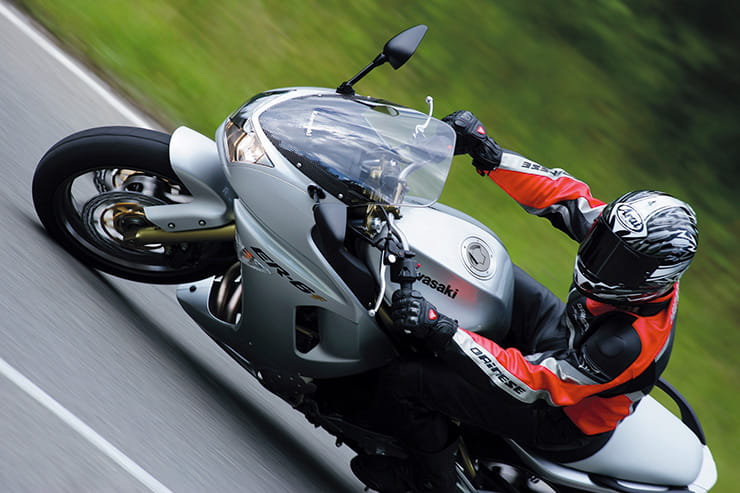 The middleweight division is a hotbed of different styled models, all trying to entice potential buyers. But if you’re in the market for a motorcycle that combines the low rpm drive of a V-twin with the upper rev range of a four-cylinder machine then the parallel twin-cylinder engine of the Kawasaki ER-6f could be the bike for you.

The engine is a sweet little unit that can deal with city riding in the morning and fast A-roads in the afternoon. Although Kawasaki has tried and tried again to reduce the vibrations that appear at high rpm they still appear, not annoyingly so, but they are noticeable. Think of the ER-6f as a halfway house between competent commuting tool and a supersport bike and you have this little charmer nailed.

Weekend blasts across country? The ER-6f does this easily and puts a smile on your face at the same time with its willing engine and easy-going chassis. Bends come and go as easy as that without leaving a bad taste in your mouth or a helmet lining soaked in sweat.

The ER-6f works as a decent, honest motorcycle. It delivers fun on one hand and is a serious work tool on the other. It is one of motorcycling’s great unsung heroes in helping owners step up to bigger, but not necessarily better things. 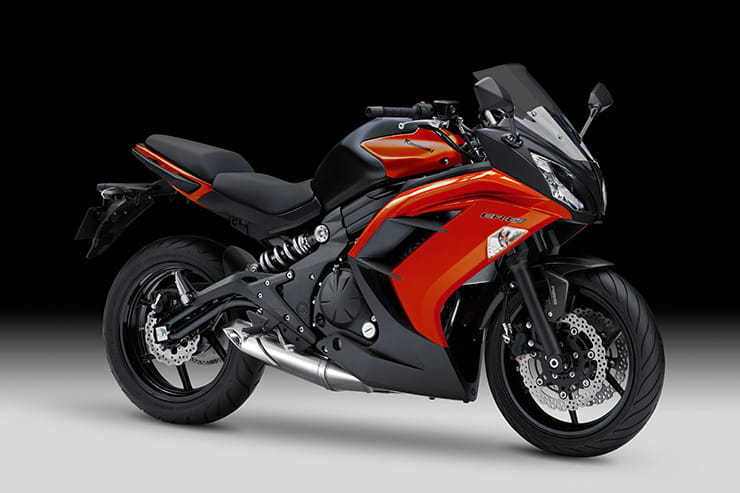 Having set the benchmark for so long, the ER has been made to feel a little antiquated by Yamaha and their new parallel twin motor and as such there is no denying the Tracer 700 is a better bike than the ER-6f in a modern context. However if you are on a budget, the ER-6f’s motor is still a fantastic little power plant and its chassis (soft suspension aside) is sporty without going over the top. Comfortable, fun, reliable, charming and above all – very cheap. However compared to modern machinery, the ER-6f does show its age and feels a little basic. But there again, one look at that price tag and it is hard to complain too loudly.

The most annoying thing than that sends ER-6f owner’s wild is the fact the fairing has a weird vibration, which creates an irritating buzzing sound at speed. Not all bikes suffer from it, but the cure seems to be adding a bit of foam to various areas within the fairing to dampen out the vibes…

Onto the more serious issues, a few earlier ER-6f models suffer from cracked header pipes at the point they enter the muffler, so check this area well as new units will set you back around £200. Also ensure the ignition key turns sweetly in the lock as a few owners report the barrel can fail. One slightly worrying issue with the earlier ER models is the frame’s tendency to crack around the top engine mounting brackets in a hard spill, so always check this area very well as a lot of used bikes have been down to the road. And while you are looking the bike over, also inspect the brakes as the two-piston calipers do seize on their sliders if not well cared for. Rebuilding them is relatively cheap (factor in a cost of roughly £150 for both) but it’s an unnecessary and avoidable annoyance. If you want ABS on earlier models, you need to find a bike with it fitted as it was an optional extra.

The ER is a bike built down to a budget and as such the suspension can start to show its age quite quickly. Look for any oil leaks on the forks and shock and also ensure the shock has some damping left in it as this can go off on used bikes. Play on the top shock absorber mount is another common complaint from owners, so inspect this area well. As on any cheaper bike, you have to expect some corners to have been cut in terms of finish and as such rusty swingarms and corroded fasteners are a common gripe. Watch out for any chewed heads on fasteners that hints at them being seized in place.

Generally the ER is a mechanically very solid bike, it is just the usual areas in terns of fit and finish that highlights the bike’s budget price tag. 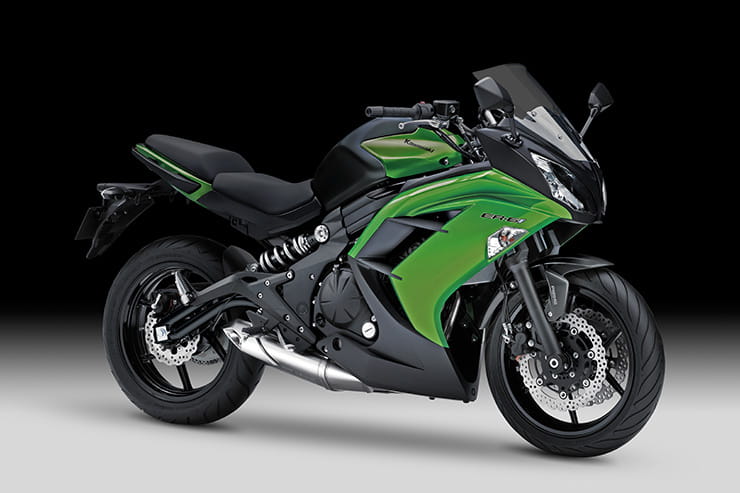 The ER-6f was initially launched in 2006 alongside the naked ER-6n. A year later the Versys joined the ER range and in 2009 the ER models received slight styling and chassis modifications. The ER-6 range was substantially updated in 2012 with a new chassis, updated look, altered dash and a revised engine with improved fuel economy and better low and mid-range performance. In 2017 the Ninja 650 replaced the ER-6f while the ER-6n was superceded by the Z650. 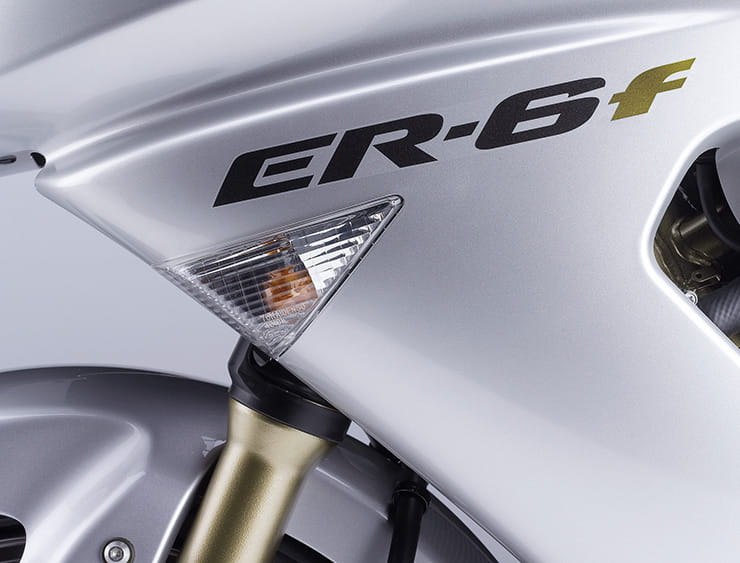