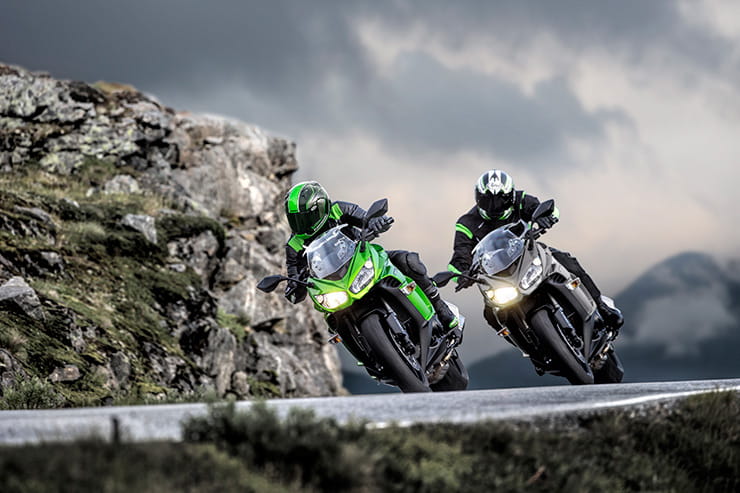 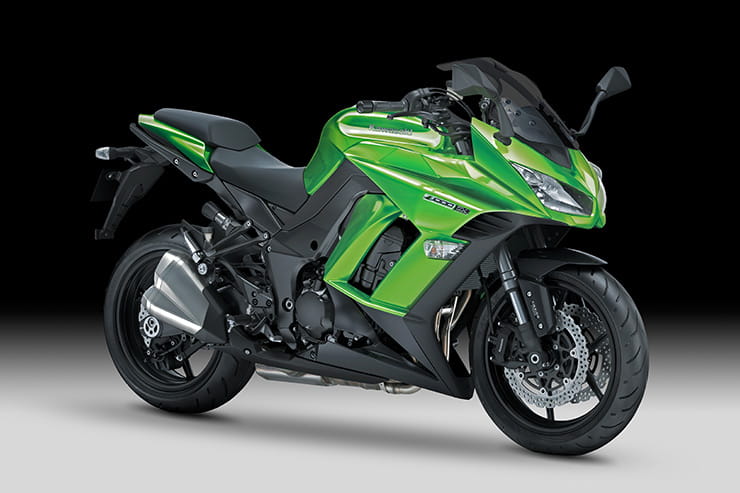 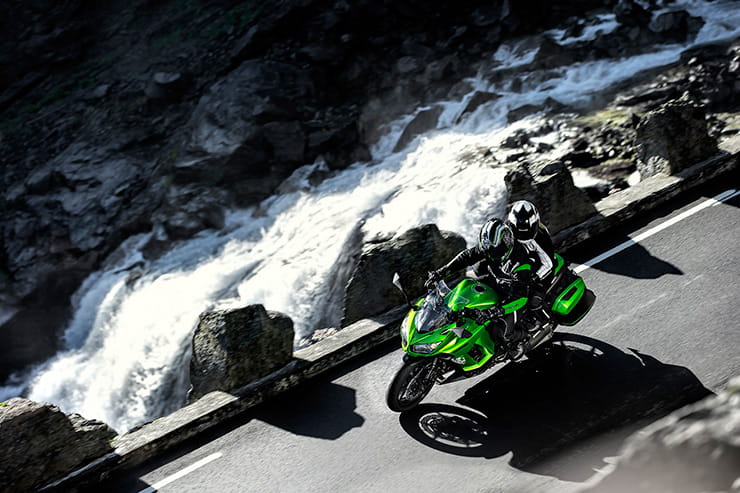 Despite initially appearing to be simply a Z1000 with a fairing slapped on it, the Z1000SX proved a masterstroke of design by Kawasaki. Launched in 2011, this relaxed sports tourer tapped into a new market segment that wanted the upright riding position offered by a naked bike combined with the practicality of tourer. But, crucially, they demanded all this without compromising in terms of sporty handling. Enter the Kawasaki Z1000SX, one of the best do-it-all bikes to emerge from Japan in years… 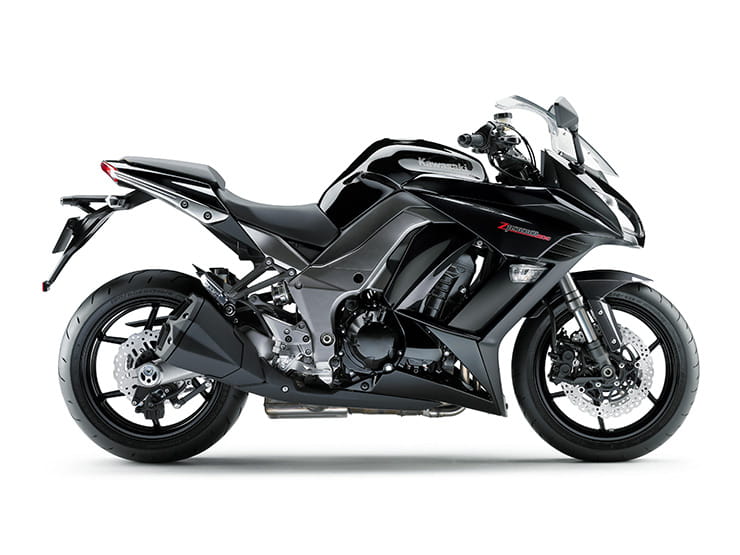 Based around the Z1000’s 1043cc inline four, the SX’s airbox has longer throttle intake funnels to boost the engine’s midrange performance as well as a 38mm throttle bore, again for grunt. However to ensure that the SX doesn’t get all linear and dull, Kawasaki purposely added in a kick in power at 7000rpm to give the rider a bit of a thrill. But, again very cleverly, a secondary balancer shaft (which the Z1000 also has) driven off the crankshaft reduces engine vibration, ensuring a smooth ride at motorway speeds while not totally eliminating all vibes as a bit of a buzz gives a bike some character. The SX’s final drive gearing is also one tooth less than the naked bike’s (15/41) to give the tourer a less rev-happy engine while still retaining strong acceleration and the ECU is remapped for a more fluid throttle response. 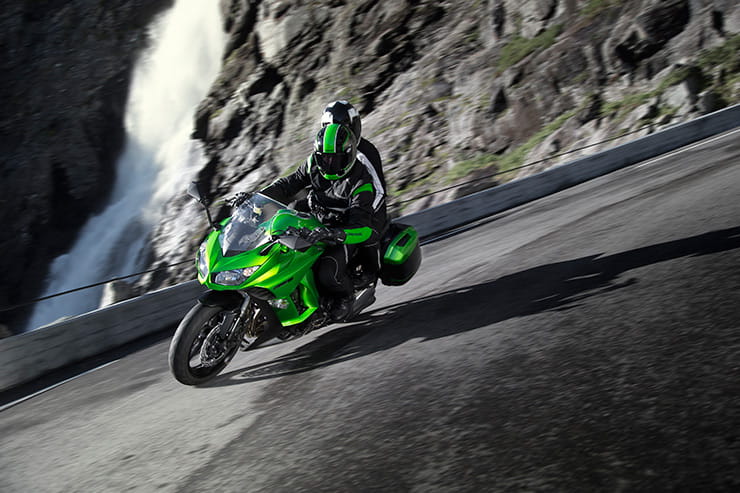 By using the engine as a stressed member, and also running the aluminium twin-tube frame over the top of the motor, Kawasaki gave the Z1000SX a very narrow waist, effectively reducing its seat height as the rider’s legs aren’t splayed apart. Constructed from five cast aluminum pieces (steering stem, left and right frames and two cross pieces) the frame is also very light and is designed to transmit some vibrations from the motor to the rider. While three of the four engine mounting points are rigid, the upper rear crankcase mount is rubber, allowing a bit of feeling through vibration to escape. Mass centralisation played a major part in the SX’s frame’s design to give the SX sporty yet still assured handling. Those of a practical nature will be please to hear the SX’s underseat storage is approximately twice that of the Z1000… 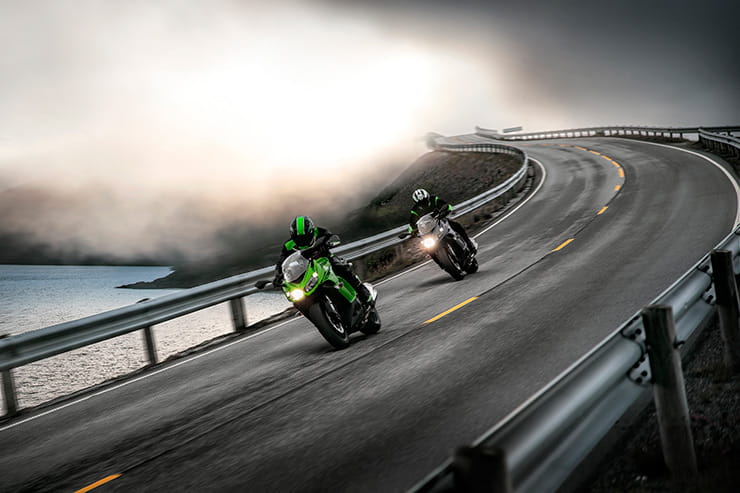 The 41mm inverted forks are fully-adjustable but, slightly oddly, compression damping can only be altered in one fork leg. Like the Z1000, the SX features a horizontal back-link suspension system that positions the shock and linkage above the swingarm. Kawasaki claimed this design not only helps the bike’s mass-centralisation, it also prevents the exhaust overheating the shock and affecting its operation. The shock has stepless rebound adjustment and a cam-style preload adjuster. 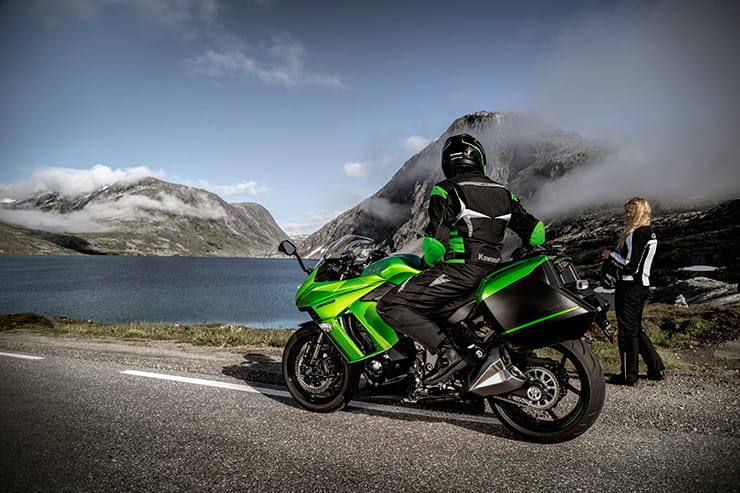 Armed with twin four-piston radial calipers gripping Kawasaki’s traditional ‘petal’ 300mm discs and a radial master cylinder, the SX’s stopping power was certainly sporty.  The rear runs a single-piston caliper with a 250mm petal disc. ABS was an optional extra in 2011 (it arrived as standard fitment in 2016) and added 3kg to the bike’s 228kg wet weight.

The original SX come with a slightly disappointing lack of electronic assists. ABS was optional (for £400 more) and there was no traction control. Heated grips were also an optional extra. 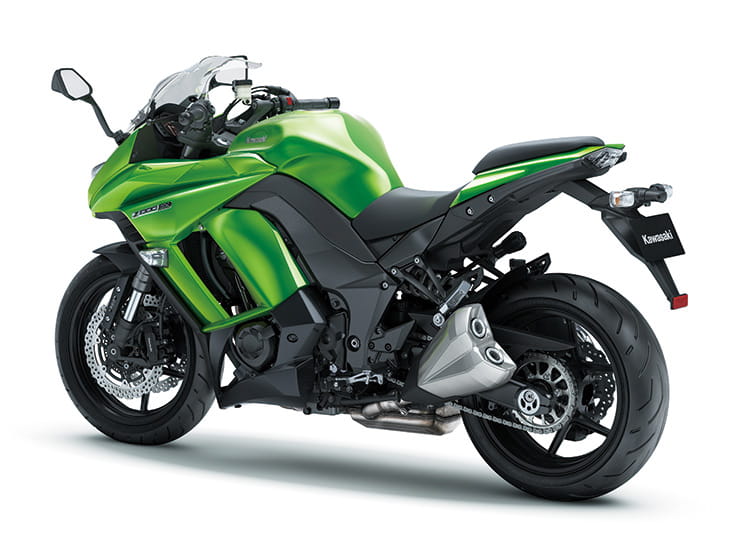 Far from simply a clone of the Z1000, Kawasaki actually tweaked the SX’s riding position to make it more comfortable for distance work. The SX’s grips are 10mm more inward when compared to the Z1000 and the rider’s pegs are rubber-mounted and rubber covered to reduce vibration. The screen can be set in three different positions, spanning a 20-degree angle, and the 19-litre tank is steel to allow the use of magnetic tank bags. And as if that wasn’t enough, the SX’s fairing is flaired to deflect heat escaping from the motor away from the rider’s legs and its leading edges are slanted to direct wind flow around the bike. The only downside is the seat, which some owners feel lacks padding.

Pillions get a grab rail as standard and the pillion pegs are also rubber coated, but the seat isn’t the most padded. 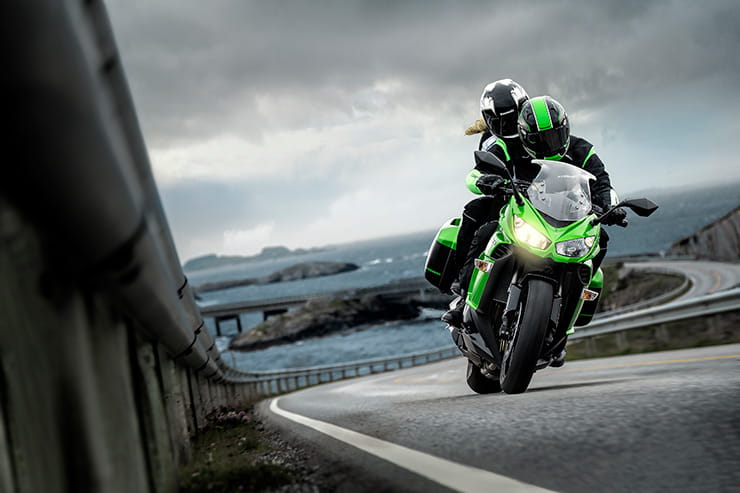 In 2011 the Z1000SX was a breath of fresh air that split opinions. Those more used to a full-on sports tourer expected more from its handling, but the majority of riders saw it for what it was – a very comfortable, and fast, faired naked bike with heaps of practicality. It was a surprise hit and stole quite a few sales from its naked sibling, the Z1000. It had its faults, the most noticeable of which was the lack of electronic assists such as power modes and traction control, but after riders gave it such a positive reaction these issues were quickly addressed by Kawasaki in its 2014 update.

The original SX delivers exactly what you expect it will. This is a really solid tourer that can certainly be enjoyed in the bends and is also extremely adept at covering big miles. The riding position is wonderfully upright and relaxed and it’s also a pleasant place for pillions to spend time (provided you buy the optional extra gel seat), which is always a good thing on a tourer.

The inline four engine has bags of grunt and it is hard to complain about any motor that kicks out a claimed 136bhp with 81ftlb of torque backing it up. If you are after a sporty tourer, the SX remains a great buy, however in a modern context its lack of electronic assists is a bit disappointing. Nowadays you expect traction control to be on a large capacity bike and that is the one area the SX is left lacking. If this doesn’t bother you, buy one with hard luggage fitted and get out there and explore the world! If it does, buy the 2014-onwards version, which has KTRC as standard and optional ABS. 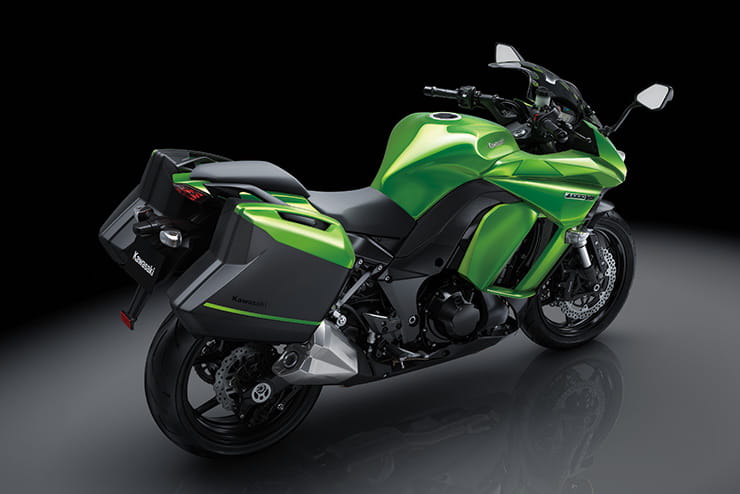 There isn’t much to watch out for with the Z1000SX as it is a very solid, and mechanically-reliable, machine. If you are looking at taking it touring buy one with panniers already fitted (there was a ‘Touring’ edition that come with them as standard) but be aware Kawasaki say you can’t fit the top box and panniers to the bike at the same time.

As with any high-mileage used bike, it is worth checking consumable items such as chains, sprockets, tyres, bearings and brake pads for life and inspect the calipers for seized pistons and the discs for any warping.

The biggest issue with the SX isn’t really Kawasaki’s fault and that is its poor fuel economy caused by emissions regulations. A remap and race exhaust will increase it from a frustrating 38mpg area to into the mid-40s, so these alterations are worth looking out for if you are planning on using it for touring.

The Z1000SX was tweaked in 2014 when 3-stage traction control arrived (KTRC) alongside two power modes and upgraded brakes. It was updated again in 2016 when it gained an assist and slipper clutch, with a 30% lighter lever action, ABS as standard and new colour options. It was further updated in 2017 when it received more advanced rider aids that included an IMU, allowing it to feature angle-sensitive traction control and ABS for the first time. The shock linkage was also updated to lower the bike and add stability to its handling and its styling was changed with LED lights. In response to owner’s comments, the seat’s padding was increased, pillion grab rails redesigned, clocks updated and the screen made 15mm taller while the bodywork grew 28mm wider to improve wind protection. The mirrors’ stalks were also extended by 20mm. 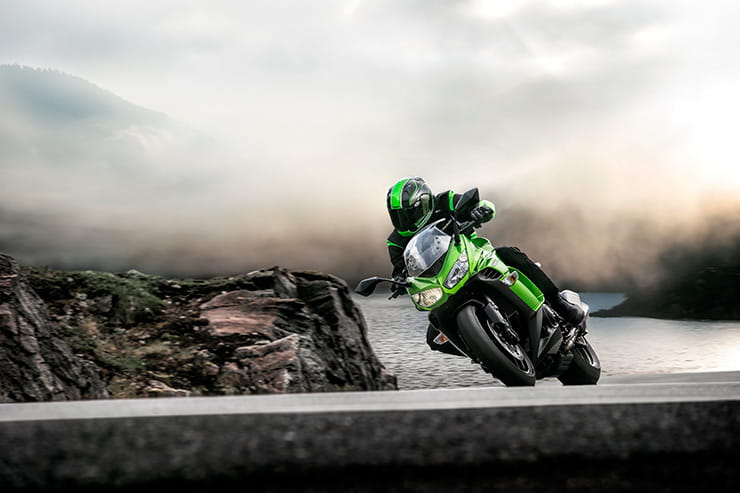