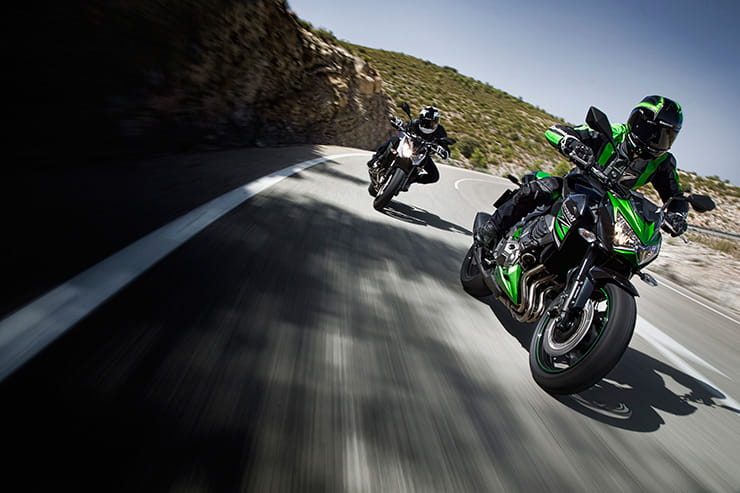 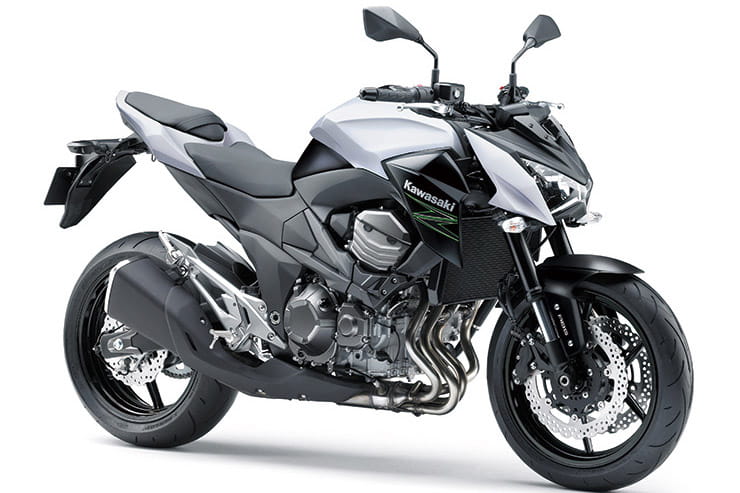 The introduction of the Z800 marked a turning point for Kawasaki’s middleweight naked bike range as it added a nice boost of power that the uninspiring Z750 lacked while retaining its balanced chassis. One of those bikes that just seems ‘right’ to ride with a lovely sense of fun about it and little irritations aside from a few vibrations, the Z800 has won a lot of fans all over Europe since its release.

Taking the Z750’s inline four as a base, Kawasaki increased its capacity from 748cc to 806cc through a 1.6mm wider bore extending it out to 71mm while leaving the 50.9mm stroke unchanged. To alter the engine’s characteristics and add a bit more zest, longer intake ducts (up from 36.5mm to 41.5mm) and revised exhaust ports were combined with intake funnels of varying lengths (the two inner are longer than the two outer funnels) and larger 34mm throttle bodies. And, as if this wasn’t enough, the bores received a plating finish, a new aluminium head added and the pistons reduced in weight by 10%. All in all, the Z800 gained 6bhp in power to 113bhp with 3.7ftlb of peak torque, however peak performance was only the headline and it was throughout the entire rev range that the differences were really noticeable. Then, as a final touch, Kawasaki added two teeth to the rear sprocket, increasing it from 43 to 45-teeth to help boost the Zed’s acceleration. Hardly a small update! To meet A2-laws that governed how powerful a bike could be before restriction, an ‘e’ version was also released with 93bhp as standard that could be tuned down to an A2-legal 47bhp. 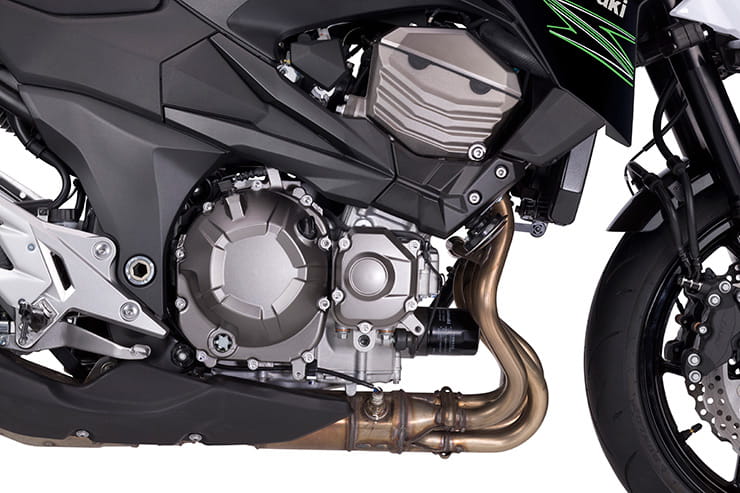 Borrowing heavily from the outgoing Zed model, the Z800’s chassis is essentially a tweaked Z750R’s unit. Using the R’s tubular backbone steel frame, as well as shifting the shock 20mm to the left of centre (it was previously 3.8mm to the right!) to make more room for the exhaust, the swingarm was extended in length by 7mm. A new cast aluminium subframe section was also added that runs down each side of the engine and connects across the front via a tube, increasing the chassis’ overall rigidity for improved handling.

Unusually for a middleweight, the Z800’s inverted 41mm KYB forks feature spring preload as well as rebound damping adjustment (but not compression). The piggyback KYB shock can have its preload and rebound adjusted, but also lacks compression adjustment.

The Zed’s wheels are a pretty standard affair, however its twin 310mm front discs are 10mm bigger than the Z750’s and are gripped by four-piston Nissin calipers. The rear is a 250mm disc with single piston caliper. ABS was an optional extra on the Z800 but was standard fitment on the lower-powered ‘e’ model. 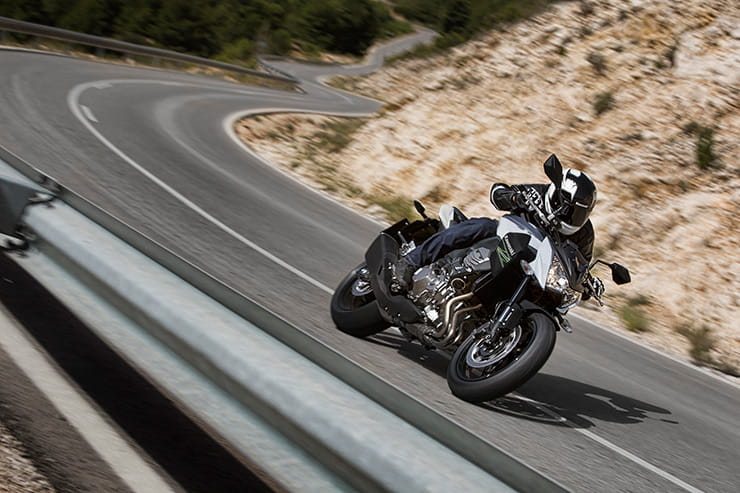 Aside from the option of ABS on the stock model, the Z800’s electronics are fairly lacking. The all-new design of split dash includes a fuel gauge but, annoyingly, lacks a gear indicator.

The Zed is typical naked bike – upright and comfortable. The small nose fairing does a little to deflect wind, but in truth it’s more a styling feature than anything else. Owners report the Kawasaki is comfortable, however there are a few intrusive vibrations which spoil its relaxed nature slightly.

The Zed’s aggressive styling means pillions get a seat that is sportsbike in its size, which isn’t great news. The upright stance of the rider makes hanging on easy, but it’s not a brilliant bike for two-up distance work. 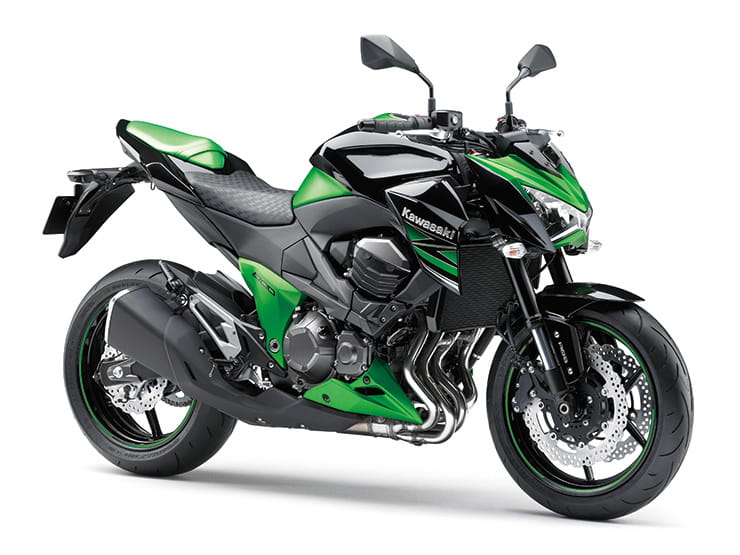 Not exactly the height of pillion comfort

The Z750 hasn’t been the big hit in the UK that it is in Europe, where it’s been market leader in many countries - 160,000 have been sold since the first 2004 model. The new Z800 could well change that, as it’s the result of a major upgrade of the old 750 model, and more importantly, a successful one.

The main changes are to the engine, which has been bored out to 806cc, and the styling, which now has an extremely aggressive, hunched forward look. It doesn’t work for me, it’s more Transformers than motorcycle, but plenty of riders are going to love it, so it’s job done there.

The big surprise is how much better the 800 is than the old 750 to ride. The engine is stronger right across the rev range, and it feels now that the bike’s power has finally caught up with its weight: it’s lively, willing and fast, with good torque at low revs. It’s also extremely smooth and sophisticated feeling, although the throttle response is a little too gentle sometimes.

The suspension is biased towards urban riding, and at low to medium speeds it feels plush and well-controlled. Push the bike hard at high speeds and it starts to get a little bouncy, but I’d not sacrifice the lower speed excellence to change that. It steers very well too with great balance.

Comfort’s good. The riding position sits you forward but it’s roomy and fine for several hours on board. A shame the mirrors aren’t wider though, there’s very little in them apart from elbow.

The used middleweight class contains thrilling machines such as the Triumph Street Triple or Yamaha MT-09 and because of this it is easy to overlook a more relaxed entry such as the Zed. But this is a great bike and one that will suit a certain type of rider.

Kawasakis always polarize opinions and the Zed’s aggressive looks with its sharp lines will not appeal to everyone. And the same is true of its motor, which is super-smooth but does lack that triple zing you get with the Triumph or Yamaha. But is this a bad thing? Not necessarily…

When you ride a Z800 it feels so balanced and so beautifully smooth on its throttle that you are seldom left frustrated, which can be an issue with early MT-09 models with their slightly too sharp fuelling. For chilled-out riding the Zed is far easier to live with than the Yamaha and also not quite as frantic as the Street Triple, which does tend to feel like a mini sportsbike with flat bars. And the Zed is physically bigger than the Triumph, which is also a plus point.

If you prefer an inline four’s feel and response over a triple, and many riders do, then the Zed won’t disappoint. It looks different, has a great chassis for road riding on the UK’s uneven tarmac and the engine is super-relaxed. It may lack a bit of capacity and therefore grunt when compared to the updated Z900, but it’s still a lovely naked road bike with a reasonable price tag and nice bit of Kawasaki spirit. 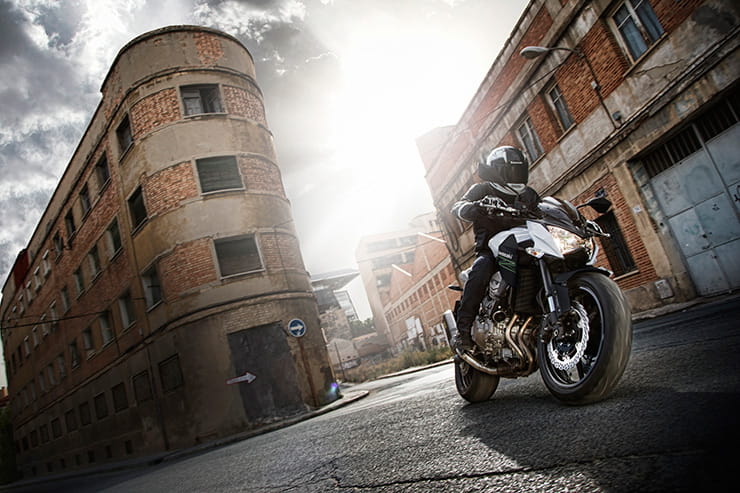 The Z800 has impressive build quality and is also a fairly new bike, so there isn’t much to be that wary of. After giving it a thorough inspection for any crash damage, you only really need to check the consumable items such as the chain and sprockets, tyres, brake pads etc and also the fitment of any aftermarket extras such as a screen, exhaust or tail tidy, all of which are fairly common additions. A few owners attempt to reduce the bike’s vibrations by adding aftermarket bar ends, so also check the throttle’s action isn’t compromised in any way. Aside form an HPI check to ensure there is no outstanding finance and a look at its service history, the Z800 is a safe used buy. It is pretty unlikely, but always check you are buying a Z800 and not the Z800e which is lower power. Unless you want to get it restricted to A2-legal that is, in which case you need to buy the e.

Ensure you know which model of Z800 you are buying as the ‘e’ version makes less power.

The Z800 was never updated however it was replaced by the Z900 in 2017. A fairly substantial change, the Z900 brought with it more power with a sleeved-down Z1000 motor boasting a 948cc capacity, better handling through a new tubular steel frame and less weight. While also lacking any electronic assists such as traction control (ABS is standard fitment), the Z900 encapsulates all the Z800’s balance, but in a more powerful machine with better handling. The Z900RS was launched in 2018 and is a retro styled Z900 that comes in naked or half-faired Café formats and is a brilliant machine that has been a big hit for Kawasaki.

There are loads of Z800 models for sale, so you can afford to be picky. Prices start at £3800 in a private sale for an early model with dealers charging closer to £4500. A late model will set you back just under £7000 in a dealership.