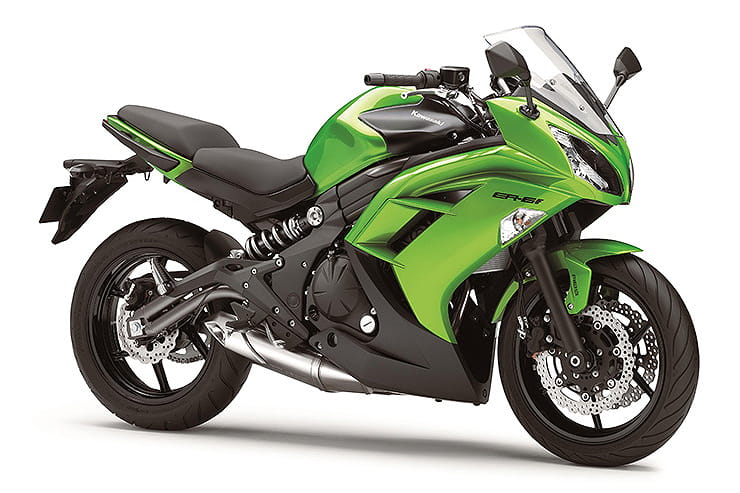 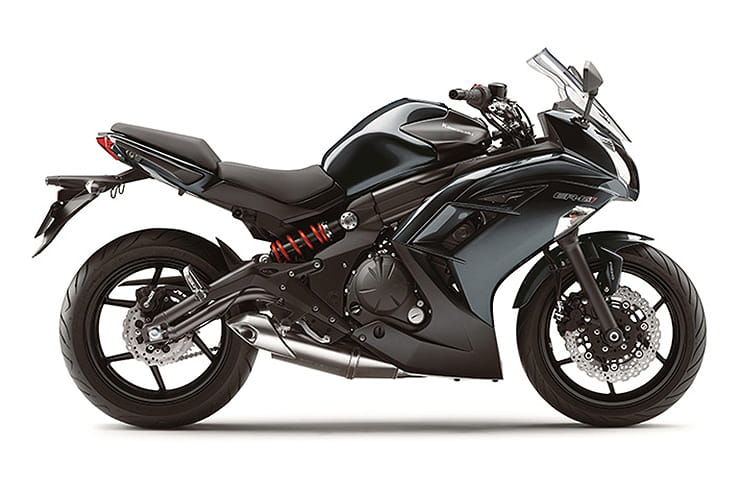 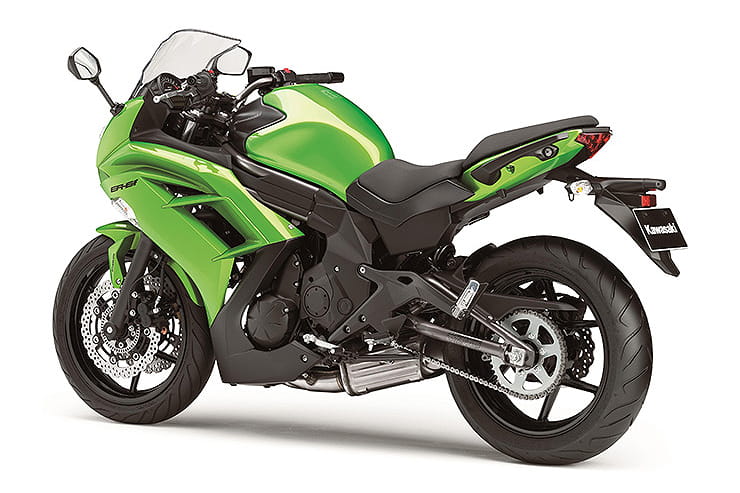 Originally launched in 2005, the ER-6f is the faired, sports-styled brother to Kawasaki’s ER-6n naked roadster, both powered by an all-new parallel twin and intended as affordable first big bikes. Rivalling Suzuki’s SV650 they were a big success, too.

Both were updated in 2009 with a revised frame and with the ER-6f getting a restyled fairing, then again in 2012 with a further revised chassis, some engine mods and a further styling tweak. This bike then lived on until 2017 when it was replaced with a further updated model now renamed the Ninja 650.

The ER6 pairing were always intended as affordable, first ‘big bikes’ and as a result were both temptingly priced when new – this incarnation starting at under £6K in 2012 – and now represent even better value as a used buy – as long as you find a good one. Now beginning to age, built down to a budget and often owned by inexperienced riders, all these factors can lead to neglect, damage and/or corrosion – so inspect carefully. On the plus side, it’s always been a popular bike so there’s still plenty out there to choose from and the 2012-on model was the best built version yet. Although higher mileage, slightly more tatty examples can be had for under £3K, as little as £3250 should still get you a low mileage (under 10K), good condition example which still has the features and performance to make a great first bike or commuter. 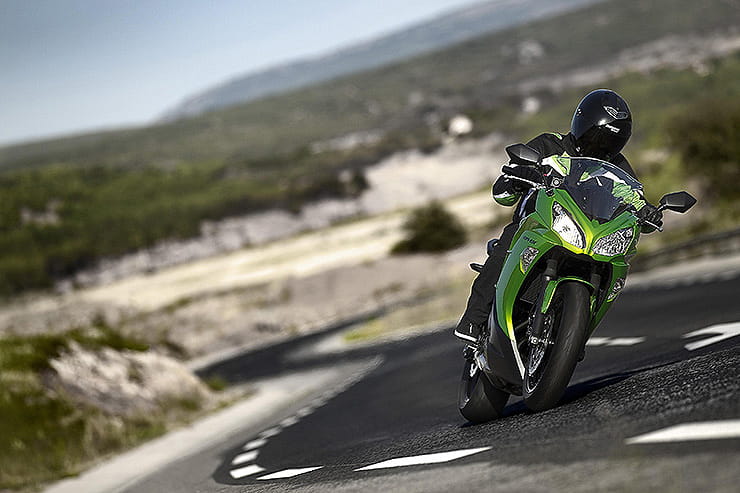 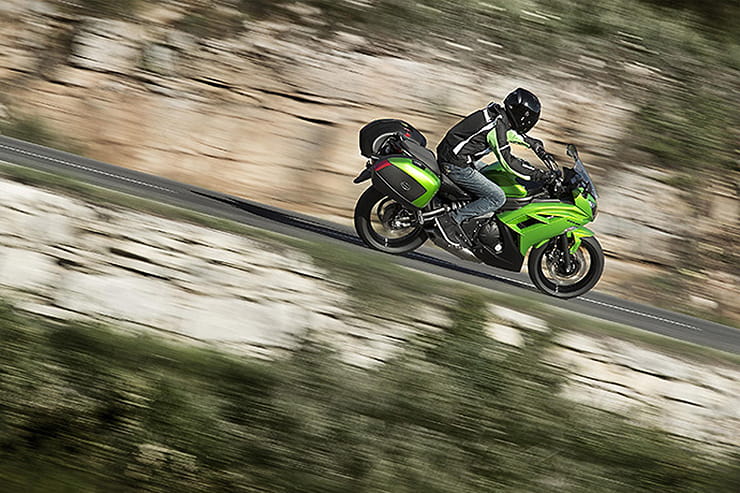 If you’re in the market for a motorcycle that combines the low rpm drive of a V-twin with the upper rev range of a four-cylinder machine then the parallel twin-cylinder engine of the Kawasaki Er-6f could be the bike for you. It sounds complicated, but that’s exactly how the ER-6f engine feels to use.

Think of the ER-6f as a halfway house between competent commuting tool and supersport bike and you have it nailed. Its engine is a sweet little unit that can deal with city riding in the morning and fast A-roads in the afternoon. It loves to be revved to get the best from it, but the rev ceiling isn’t stratospheric in the same way as a full-blown supersport middleweight, which is just as well.

The original ER6f and N and all its subsequent variants, including the later Ninja 650, have all been based around a revvy but flexible DOHC parallel twin purpose built for the original back in 2005. Although further small changes were made for this incarnation, specifically tweaks to the fuel injection settings and ECU, it was essentially unchanged. It’s generally proved reliable over the years, especially if properly looked after and serviced and has also become the go-to engine in ‘Minitwin’ racing, as most famously used in the TT Junior class. As with earlier models there are some vibrations at high rpm but although noticeable, they’re not a problem. The gearbox is a standard six-speeder and is also reliable while the exhaust is a stubby-style unit under the engine which, in this incarnation was a one-piece welded item precluding the fitment of a separate aftermarket silencer. 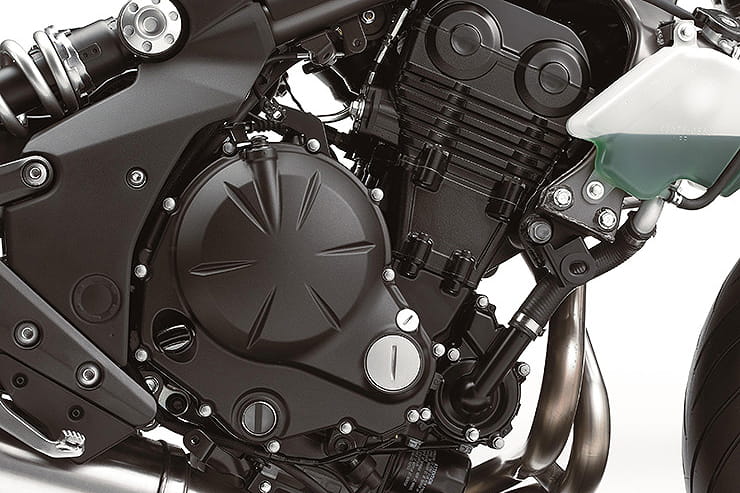 Although the ER-6f’s parallel twin motor thrives on high revs it’s also reasonably tractable both low down and in the mid-range so it doesn’t have to be caned to perform at its best – although if it is expect fuel consumption to suffer accordingly. In general, all-round use, being a lightweight twin, mpgs can be expected in the high 40s or even mid-50s helping make Kawasaki’s middleweight and affordable all-round option. Usefully with this variant, Kawasaki added an ‘Eco mode’ warning light which displays when the bike is being ridden at its most frugal, so aiding the most efficient fuel consumption.

With a new, lighter, twin tube perimeter frame the 2012 ER-6f was more flickable than ever while still proving an unintimidating, novice-friendly machine. Slim and lightweight both naked and faired versions are easy to get on with yet also entertaining for more experienced types. The f version has slightly lower handlebars then the naked version, which, along with slightly firmer suspension settings, gives a slightly sportier ride. Both suspension set-ups, though able, are on the budget side, however. The conventional forks are non-adjustable while the side-mounted, non-rising rate cantilever rear shock is adjustable for preload only. Even so, aided by its impressively light all-up wet weight of just 209kg (slightly more for the ABS version), the ER-6f is light, slim unintimidating and intuitive to ride. 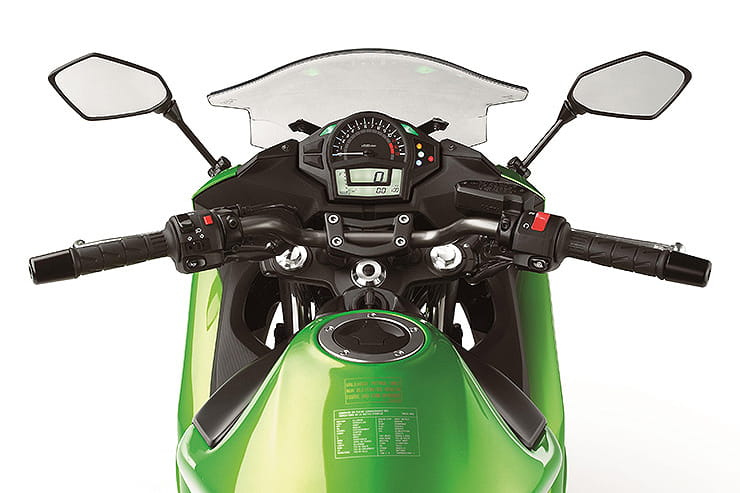 The original ER-6f and ER-6n was equipped from the outset in 2005 with then-new ‘petal’-style wavy twin front discs grasped by fairly budget twin-piston brake calipers and these continued through to this third generation version in 2012, although it was also now offered with optional ABS for added cost. Although fairly basic and unsophisticated they do a decent enough job, certainly for the type of performance required by its likely rider. If extra power is required, the easiest upgrade is via braided brake lines and more performance-orientated brake pads. When buying used, however, check their operation. Many examples will have been used year round and/or neglected and corrosion or seizure through dirt is possible. It’s also worth going for the ABS version if possible.

Although sportier and lower-barred than the ER-6n, the faired ER-6f is definitely the one to go for if you’re likely to cover major distances. The fairing offers a decent amount of weather protection and the riding position isn’t at all extreme. Weekend blasts across country? The ER-6f does this easily and puts a smile on your face at the same time with its willing engine and easy-going chassis. Bends come and go as easy as that without leaving a bad taste in your mouth or a helmet lining soaked in sweat. All that said, it’s still a twin cylinder lightweight so isn’t as roomy or comfortable, especially for two, as a larger, bigger engine machine.

As mentioned earlier, the ER-6f, even in this third-generation guise, was always a fairly budget, basic machine so don’t expect much by way of equipment or luxury here. Accordingly, there are no switchable riding modes (although ABS was available as an option) and nothing by way of the sophisticated electronic riding aids such as traction control we’re so familiar with on more modern, higher specification machines. That said, the simple dash is attractive and includes all the basics you need; for this variant Kawasaki added an ‘eco’ display to aid economical riding and there’s also a fuel gauge. Some owners, however, bemoan the lack of a gear indicator and choose to buy an aftermarket tall screen alternative along with things like fender extenders and radiator guards. 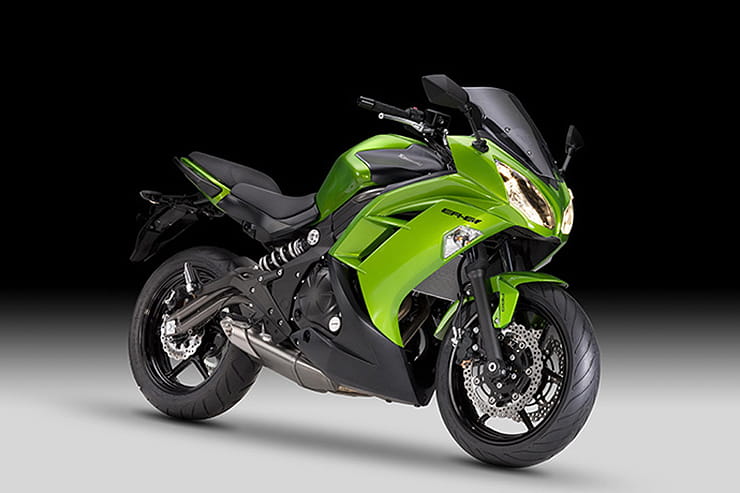 The ER-6f is a bike that is very capable of being more than one thing to more than one person, which is why it’s proved so popular. It works as a decent, honest motorcycle and delivers fun on one hand and yet is a serious work tool on the other. It’s also great for both new riders and experienced commuters who want an affordable workhorse. It is one of motorcycling’s great unsung heroes in helping owners step up to bigger, but not necessarily better things.

Three things we love about the ER-6f…