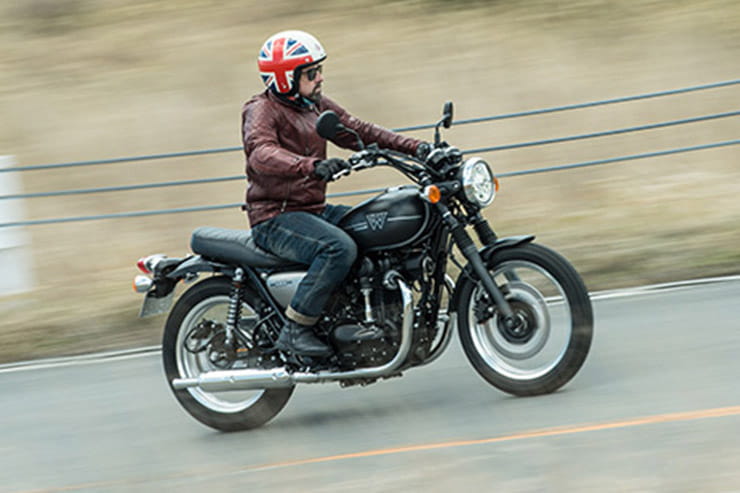 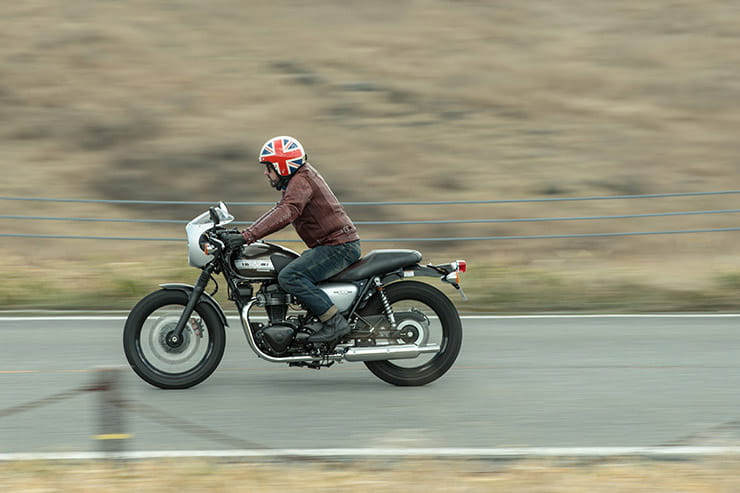 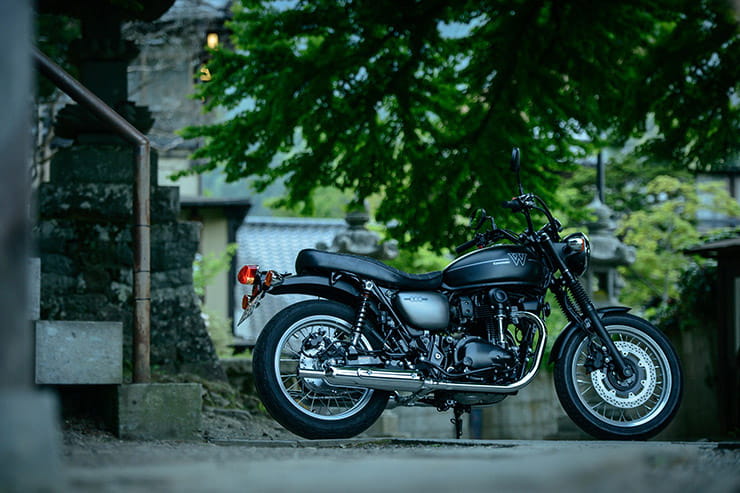 The old W800 was loved by many; simple, straightforward and appealing to a generation who remember when TV was black and white. Yet it was in desperate need of an upgrade; running an ‘old-school’ drum rear brake was never going to cut it with the millennials. Thankfully Kawasaki recognised this and has in its ranks an all-new W800 for 2019 with two variants to choose from: the laidback Street and the racier Café.

The W800 can trace its DNA back to the W1 650 of 1965, which was the first big four-stroke to leave Japan, and once again Kawasaki stay true to the soul of the model and haven’t chased horsepower and handling, instead keeping an air-cooled and unique bevel gear-driven cam engine. We travel all the way to Japan to spend a few days with both the traditional Street and Café model.

If you wanted to opt for the British equivalent then Triumph’s Street Twin starts at £8100 but more worryingly for Kawasaki, Enfield’s new 650 Interceptor starts from as little as £5499. 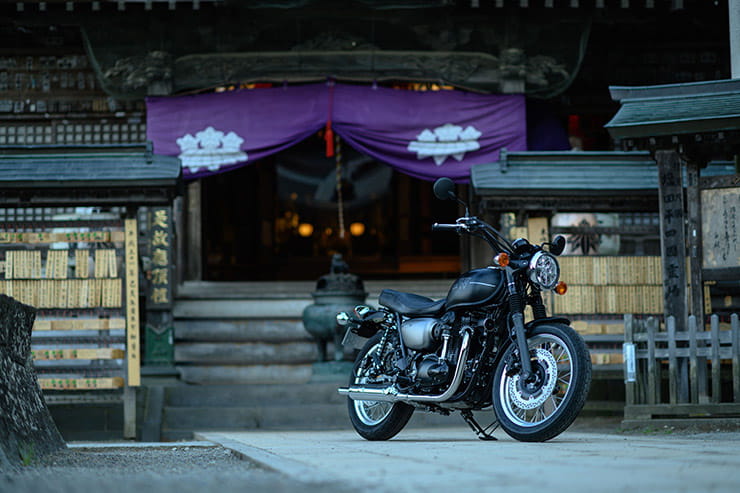 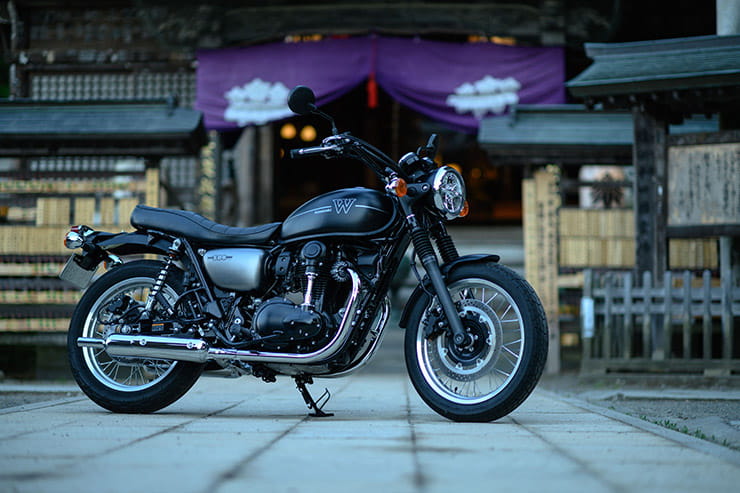 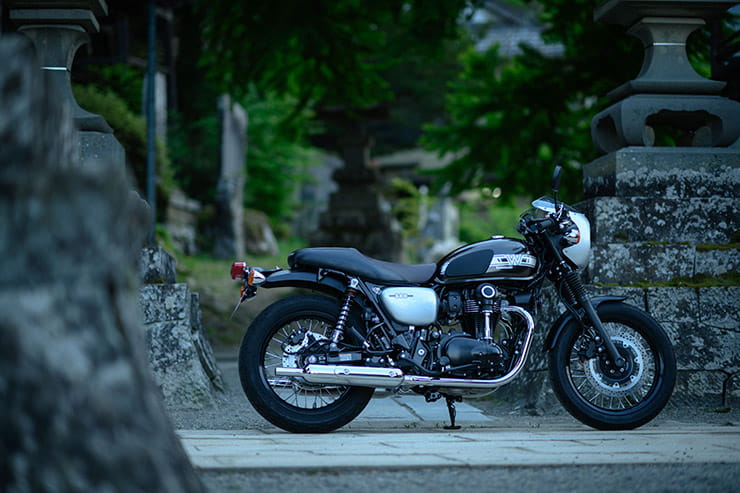 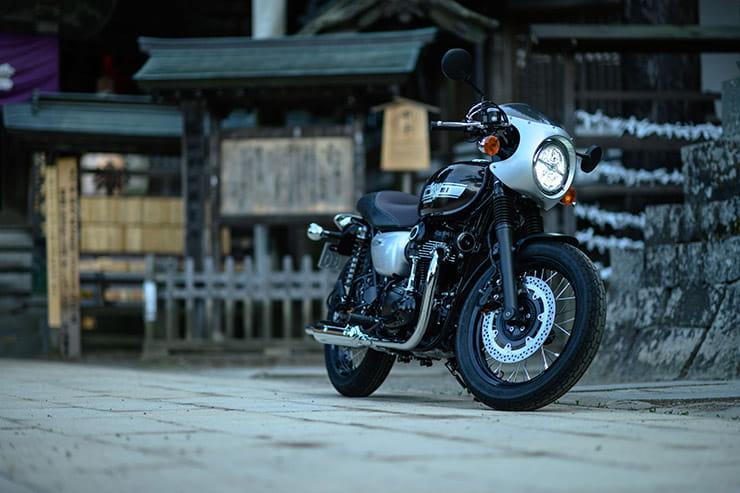 The 773cc twin remains air-cooled and retains its unique bevel gear-driven cam, which Kawasaki admit was chosen for cosmetic reasons only. Internally, the engine has been upgraded with new pistons but remains similar to the older unit with a quoted, A2-compliant, 47bhp peaking at 6000rpm. Kawasaki could have opted for water-cooling and even conventional chain driven cams which would have resulted in more power but instead have kept with tradition: 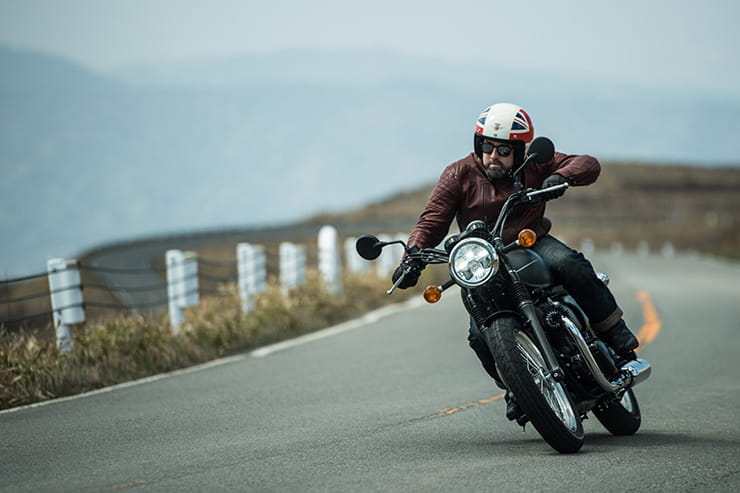 With only 47bhp, the W800 could hardly be described as quick. It’s slow revving and almost lethargic but perfectly matches the bike's relaxed feel. If you find yourself constantly revving a W800 then, sorry, you’ve bought the wrong bike. Simply cogging back one gear will result in enough punch (peak torque is at 4800rpm) to take care of brisk overtakes safely.

Kawasaki’s new W800 is effortless and easy to ride, its flat torque curve and precise fuelling allowing you to smoothly change gear at any rpm, even as low as 2000rpm, and simply short-shift to the national speed limit. Once into top gear, fifth, your left foot becomes redundant as the W800 will happily pull from anywhere.

I only craved for more power when exiting slow uphill corners on the mountain passes we encountered, but the parallel twin's output was more than sufficient for 90% of the ride, and the bike managed an indicated 100mph without too much fuss. In fact, its punch from 70-80mph was livelier than I expected from a A2 licence-legal bike.

The parallel twin, with its long-stoke 360-degree crankshaft, starts with a rewarding burble. Kawasaki admit they spent a fair chunk of the budget on the exhaust note, and a blip of the soft throttle reveals an authentic tone plus the odd ‘pop' on the overrun. For a Euro 4-compliant bike the sound-track is impressive.

The new clutch is one-finger light and features a back torque limiting function, which prevents rear wheel lock-up on aggressive downshifts. The five-speed gearbox is smooth, and effortless.

Fuel tank capacity has increased by one litre, now up to 15l in capacity. As you’d expect for a lethargic, low revving engine fuel economy is impressive, between 55-60mpg, which gives a realistic tank range of, 180 plus miles. Disappointingly, the clocks don’t feature a fuel gauge or range. 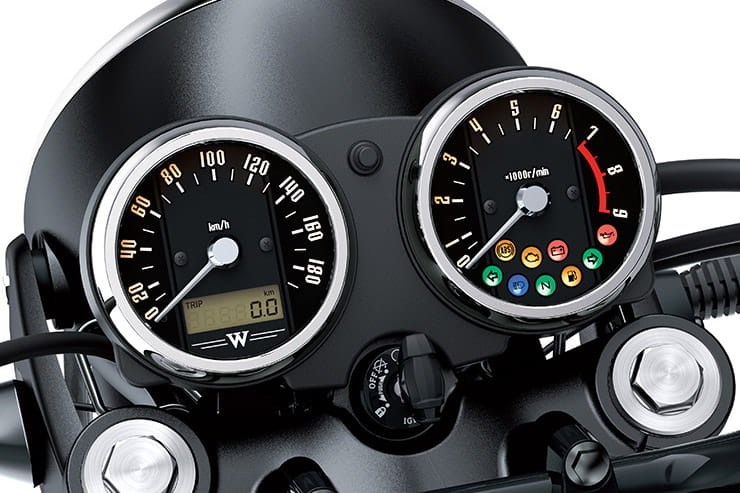 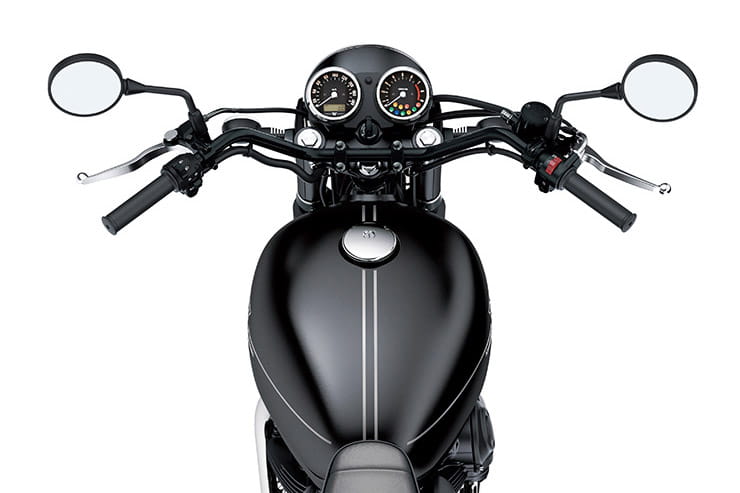 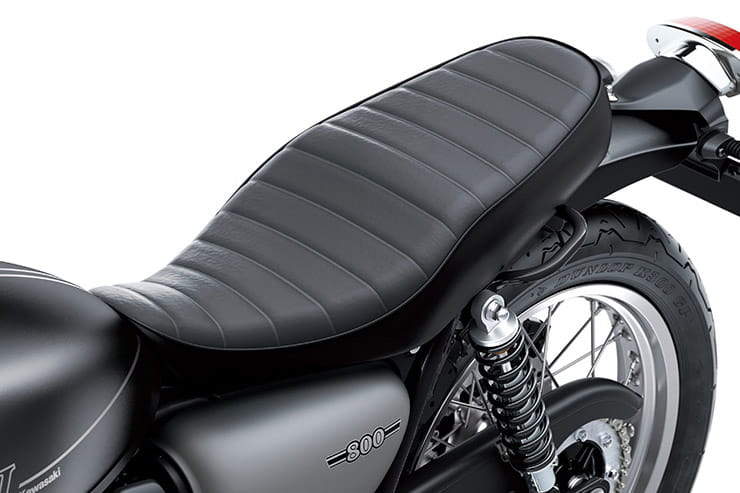 The chassis has been overhauled to improve steering response and give the W800 a sportier edge. The steel double-cradle chassis is all new, with thicker tubes to improve stiffness, while the non-adjustable forks have also increased in diameter, up from 39mm to 41mm. Perhaps the most significant change is the move from a 19in front wheel to a faster steering 18-incher, which also matches the rear.

The handling is easy and lazy, while the wide bars allow you to have some fun in the bends, and you can throw the Street around with relative ease. Even when the pegs start to leave trails of sparks, the handling remains natural and it doesn’t feel like you’re at the limitations of the W800 handling. The new suspension is softly sprung but has good control and damping and handles road imperfections without jolts or jarring.

On the open road the Café feels more alive. The aggressive, almost racy riding position encourages you to ride a little quicker and hold the revs a little longer, egged on by a charismatic exhaust. Once into the mountain region of Kirigamine I preferred the racy Café with its narrower bars slowing the steering as you simply don’t have the leverage to throw it into a corner. At high speed it doesn’t feel as stable as the Street and, with more bodyweight over the front, the forks don’t feel as plush either, though this may also be due to the increased speed, as you become more tempted to attack bends rather than trundle around. Despite moving the rider’s weight forward Kawasaki didn’t change the suspension set-up between the Café and the Street, and I’d prefer the pegs to be further back, too. 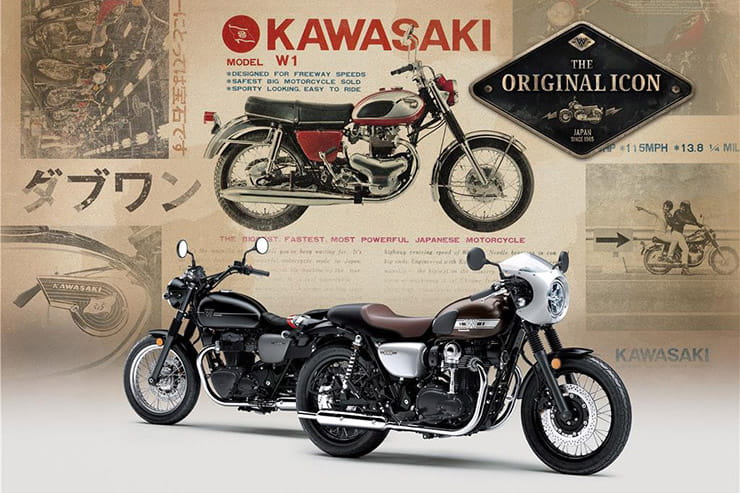 The older bike's rear drum brake has been replaced with a more modern disc while the front disc increases in diameter from 300mm to 320mm. With a full four-fingered approach the stoppers deliver a rewarding bite, and the rear disc brake is a big step-up from the old drum item. ABS as standard and not too intrusive.

For me, the W800's lazy handling best matches the laidback stance and ride of the Street -- they are the perfect match. And after riding the original 1965 W1, which Kawasaki dragged out of their museum specifically for this event, the new W800 is very much like the original, but with modern technology, brakes and reliability.

For a short blast to the coast or favourite biker hangout, I’d favour Café, but after two day of touring, I’d choose the Street. And yes, I did say touring. Its comfort at legal speeds is exceptional and the 2019 bike even comes with a larger fuel tank and an optional rack and heated grips.

The test route embraced all types of roads and weather, and the standard Dunlop K300 surprisingly coped with all of it. At high speeds it’s a little vibey, mainly through the pegs, and there is no mpg, range or gear position info on the dash, but otherwise it’s hard to fault.

Despite sharing many similarities with the Street, the Café feels like a different bike. The seat is taller by 20mm and firmer too but it is still easy to get two feet securely onto the road as it’s much narrower than the Street's. The Café's racer bars dramatically alter your body position, perching you further forward with more weight on the wrists. It’s not as natural as the Street and a tad uncompromising around town, but not as uncomfortable as some similarly styled bikes. 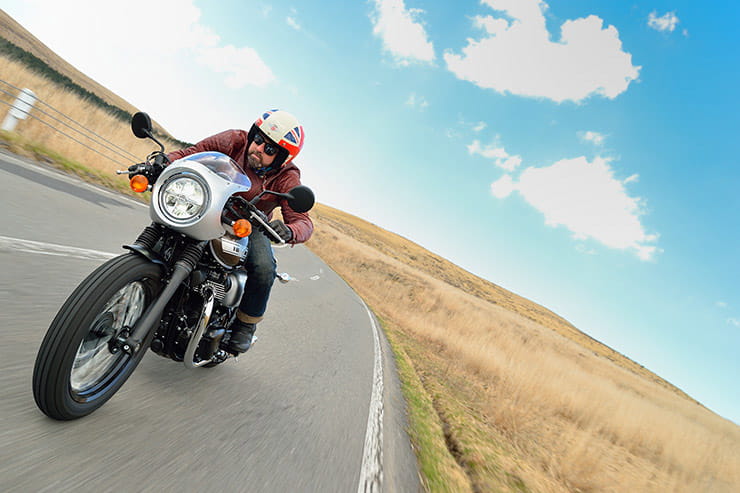 For 2019 there are two variants to choose from: the £8399 Street or the pricier £9099 Café. Both share the same basic platform and have identical engines, performance, chassis and brakes. The Street is easily identifiable with its laidback bars, wide retro seat, chrome spoked wheels and details such as a black-only bevel cover, while the Café comes with drop bars and black wheels and engine, plus side tank-pads, a chrome bevel cover and, most obviously, a front cowl. Because both bikes are the same platform, parts are interchangeable.

There isn’t a plethora of genuine accessories but there is a neat little grab rail or rack, engine bars plus cosmetic trinkets like a chrome oil filter cover, throttle body cover or chain guard. Heated grips are also an optional extra.

ABS come as standard but that’s it in terms of rider aids. There are no rider modes or rider aids like traction control, which are available on similar machines from rival firms. However, it’s questionable if rider aids are really needed on a A2 licence bike? 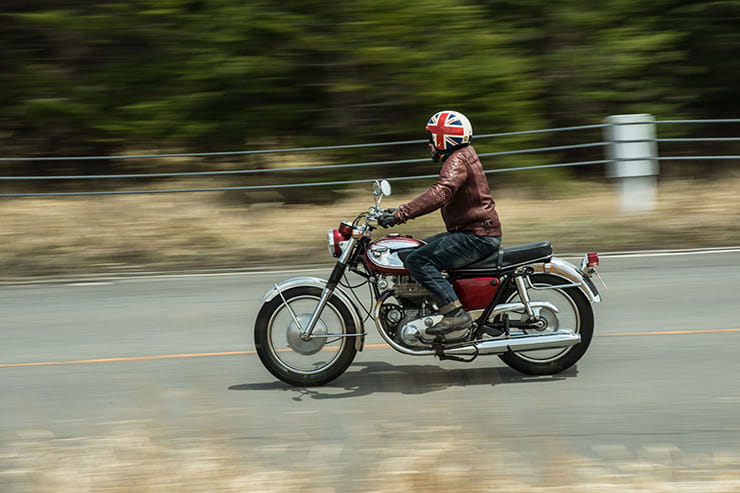 The bevel gear-driven cam engine with its wide cooling fins is lovely looking and has perfect fuelling. The exhaust has a charismatic tone, the detailing is lovely and there's a feeling of true quality throughout that arguably justifies its premium price.

I’ve lost count of the number of Japanese retro and cruiser bikes that ride perfectly and look great but lack character and soul compared to similar bikes made in Europe or America.

Bikes in this class shouldn't be evaluated on performance or handling, it’s how they make you feel that counts. Do you feel pride in ownership? Does it make you smile every time you open the garage door? Every time I jumped on the new W800 I smiled; even on day three I was still being charmed by the easy-to-ride Kawasaki. 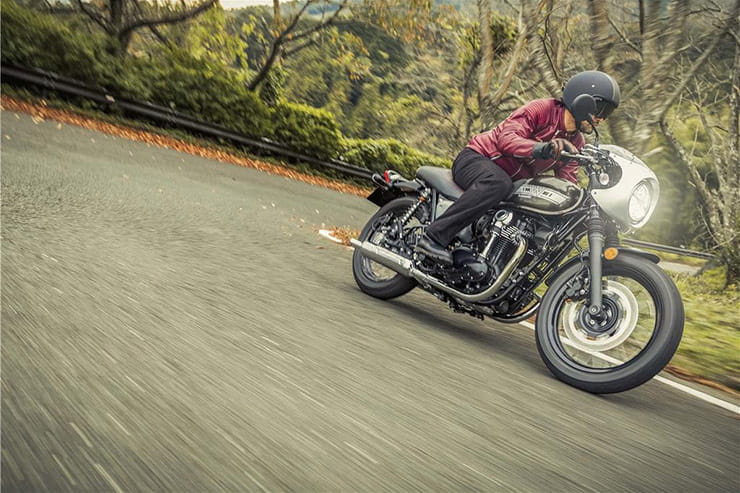 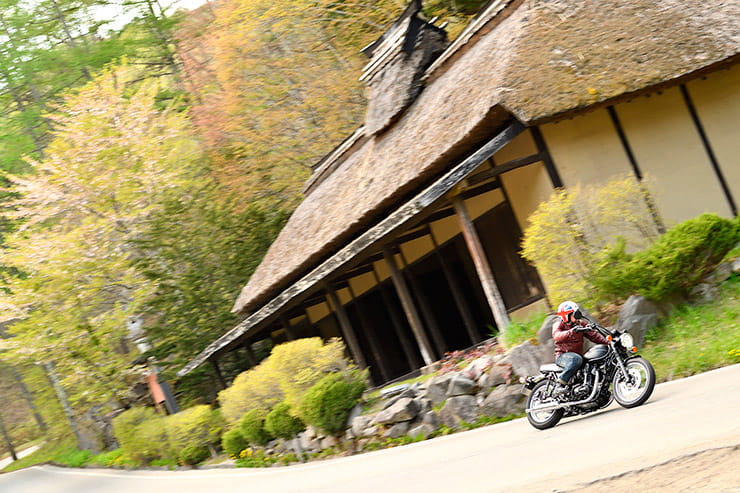 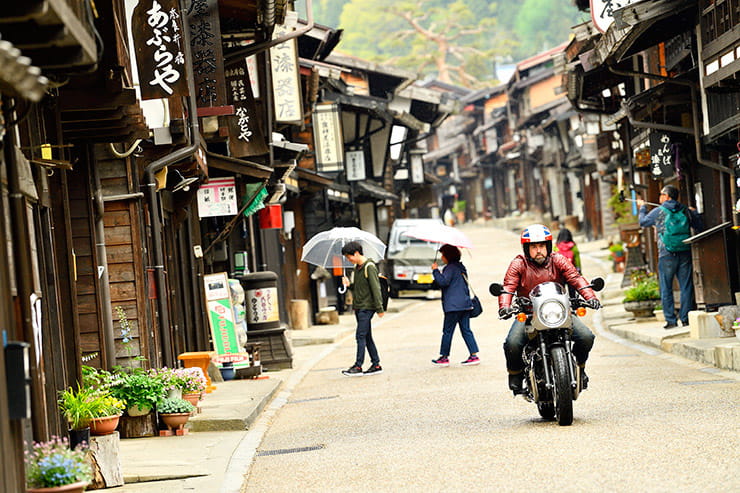