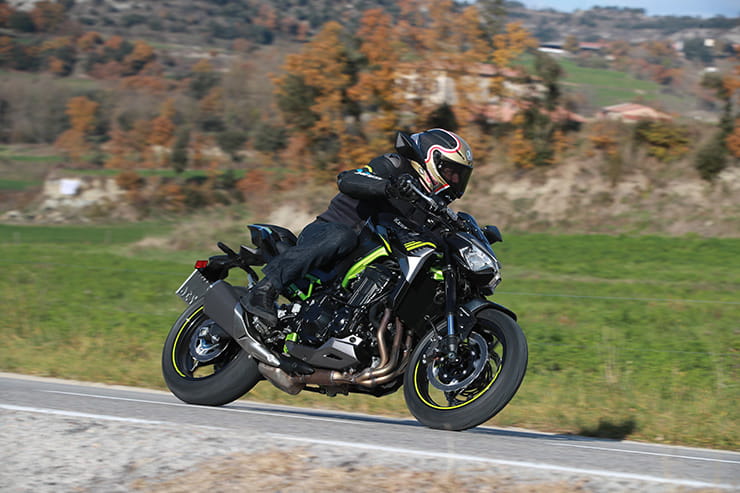 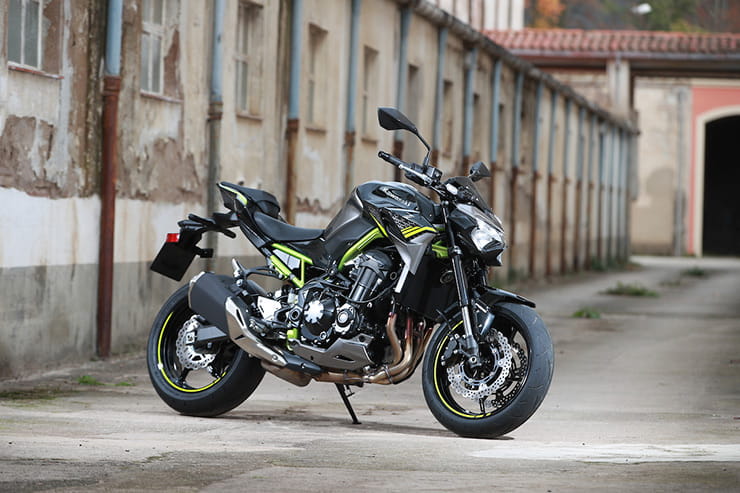 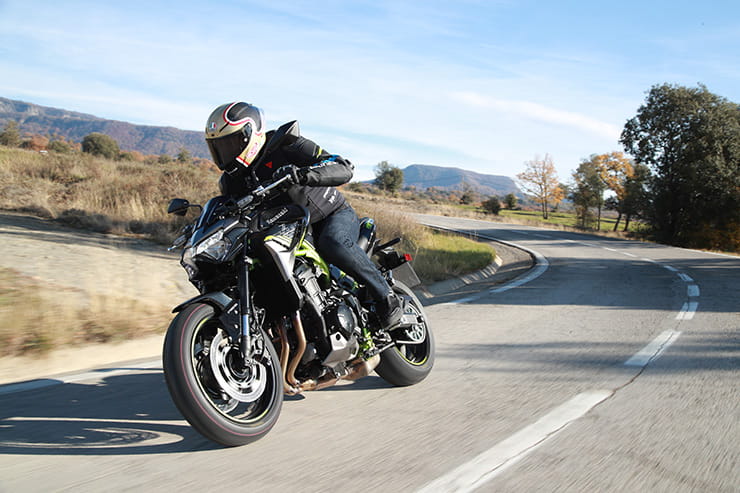 The new-for-2020 Kawasaki Z900 is another bike from the ‘Z’ range to be significantly tweaked to bring it into line with the Euro 5 emissions limits – gaining a selection of nips, tucks and new bits to go alongside the cleaner engine.

Its ancestry harks back to the Z750 from 2004 which then evolved into the Z800 by 2014, and then came the all-new Z900 from 2017 onwards, and Kawasaki was quick to remark at the press riding launch of this new model near Spain's Costa Brava coastline that it's an evolution not a revolution, targeting city and weekend riders looking for some middle ground after Z400 or Z650 before Z1000 or even Z H2.

Around 32,000 Z900s have been sold across Europe since the 2017, proving that the highly competitive naked middleweight category is going from strength to strength. Kawasaki’s sales figures demonstrate quite a surprising advantage over the two other bikes depicted on their graphs – Yamaha MT-09 and KTM 790 DUKE.

Starting with the engine and emissions, the Japanese marque has altered the exhaust to give the 2020 model a larger catalytic converter and increased silencer volume. The changes are hard to see but the firm says the exhaust note has improved too. Smoother acceleration and deceleration is promised (read on to find out if it does) while similarly invisible updates include a stiffer chassis with a strengthening around the swingarm pivot.

Tech tweaks comprise of traction control for the first time with three levels plus ‘off’ for extra wheelie capability. Two possible power settings (full power and low power - which cuts output to just 55% of the maximum) and four riding modes – Sport, Road, Rain and Rider-adaptable. As with the new Ninja 1000SX, the tech is controlled via a 4.3in TFT screen that replaces the traditional instruments, and incorporates Bluetooth connectivity for your phone via the Rideology app.

Tyres on the 2018 model were an easy target for many with the lack of feel and stability from the Dunlops, so they've been upgraded to Sportmax Roadsport 2 from the same manufacturer make their way on to the 2020 Z900.

Turning to the aesthetics, there’s a clearly redesigned nose with a new LED headlight, accompanied by a new nose cowl and reshaped side panels which extend into altered fuel tank cover sections. The rest of the lights are also swapped for LEDs, too – accompanying the LED 'Z' tail light that was already present on the 2019 model. 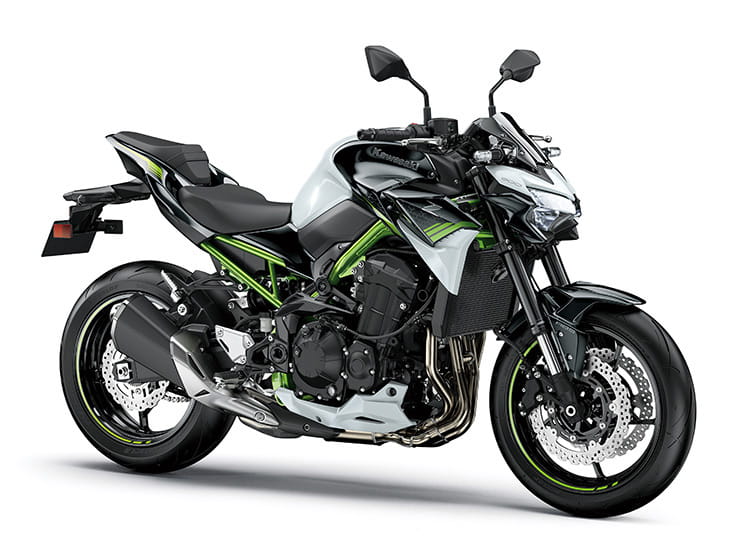 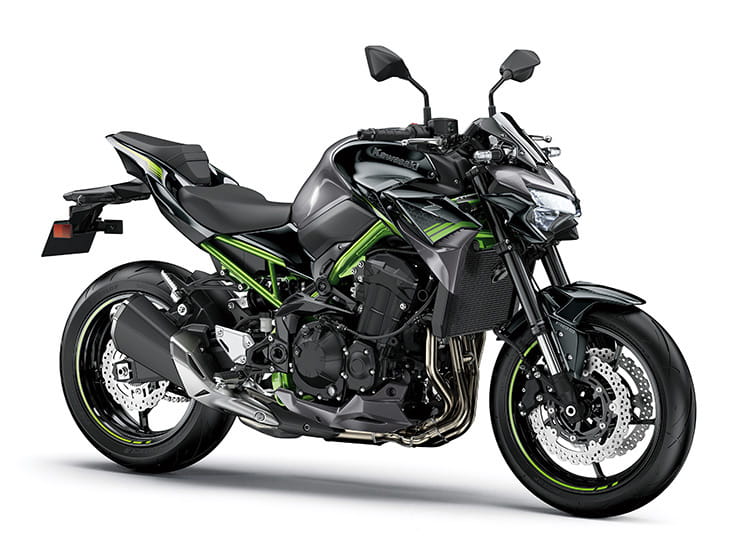 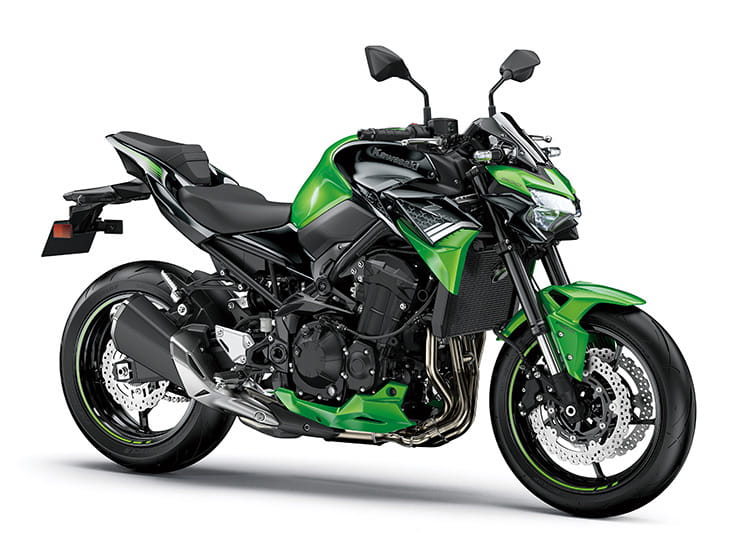 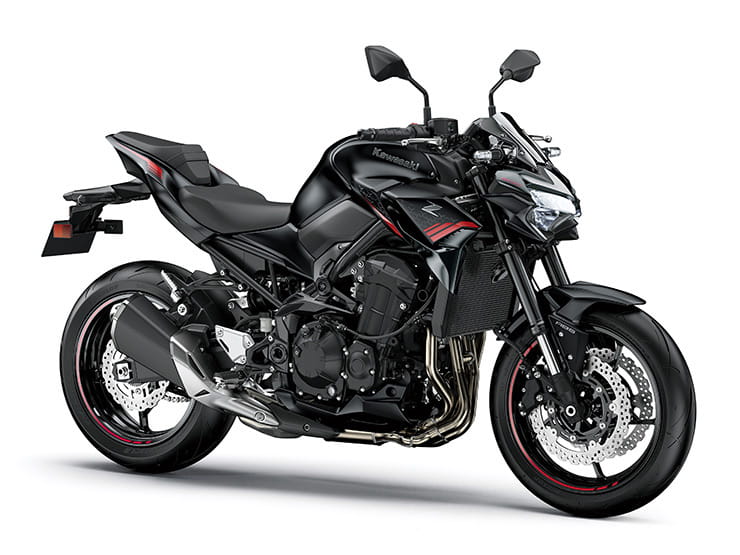 Available in the UK from mid-late December 2019, this new and updated Z900 will cost £8899, that’s just £350 more than the outgoing version despite all the extras.

If you’d rather look at monthly payments on a PCP deal then an example offer looks like this:

According to the current Bennetts customer database, the average annual premium for a 2019 Kawasaki Z900 is £257.

The four colours available are:

Even though Euro 5 has given engineers plenty of headaches in terms of ensuring power from an upgraded bike doesn’t decrease while the engines become cleaner, Kawasaki’s team has managed to keep the same performance of 125PS (123bhp) at 9500rpm and 98.6Nm (73lbft) @ 7700rpm.

An A2-adaptable model with 94bhp (able to be limited to the 47bhp A2 licence limit) will not be offered in the UK – because of the restricted power market’s lack of popularity.

The perky, peaky 948cc in-line four is the real heartbeat of this motorbike from where all the entertainment is generated. Tried, tested and now upgraded, the accompanying induction and exhaust noise is a real roar when the Z900 is wound on. It’s alert and energetic too, offering plenty of poke out of the slower corners from low revs, even in higher gears.

The high, 18-mile, picturesque coastal road to the east of Tossa de Mar towards Sant Feliu de Guixols in East Spain is crammed full of second gear switchbacks and offered an ideal scene for the Z900 to demonstrate its agility, and while most of the older Fireblades, S1000RRs and adventure bikes I witnessed would be screaming around using second, the Kawasaki was more than happy in third, if not fourth save constantly up and downshifting.

There’s a mid-range, road-bias quality with these four cylinders that are almost perfectly fuelled and joyfully smooth with the application of power that flows constantly... like my bank account at Christmas time. The throttle connection feels light and well-connected, except for the first degree of turn when rolling-on or off the power. A sharp yet momentary snatch wrecks the near perfect application while, when rolling off, the throttle return feels a little lethargic, like it needs to be forced shut to encourage the engine braking to assist with deceleration. The fuel injection settings have been updated in a bid for smoother deceleration which may be the cause. I understand that an over-emphasised dive on the forks would upset the balance of the bike and turning-in ability but I’d like more off-throttle assistance than ‘Rider’ mode in full power offers.

On hard acceleration or even from mid-to high revs when rolling-on, the revised exhaust components along with the induction noise treats willing listeners to lovely roar. It’s that connection between right wrist action and the resulting audio assault that makes assertive motorcycling so rewarding. And it’s satisfactory to know that all that noise is cleaner and greener too.

A lack of quickshifter and auto blipper on modern day motorbikes, especially one with 123bhp, is surprising enough but then to learn that one isn’t available as an option is rarer still. Yes, I get that a system like that costs plenty which would easily see the price shoot into the 9s but it’s more and more commonplace nowadays. That said, the gearbox is particularly smooth and only the lightest touch of the gear lever is required both up or down. The same goes for the clutch action – easy, light and very rider-friendly. 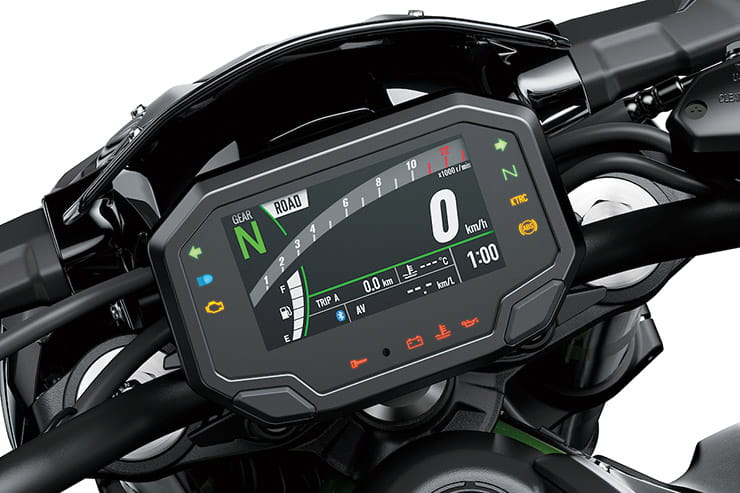 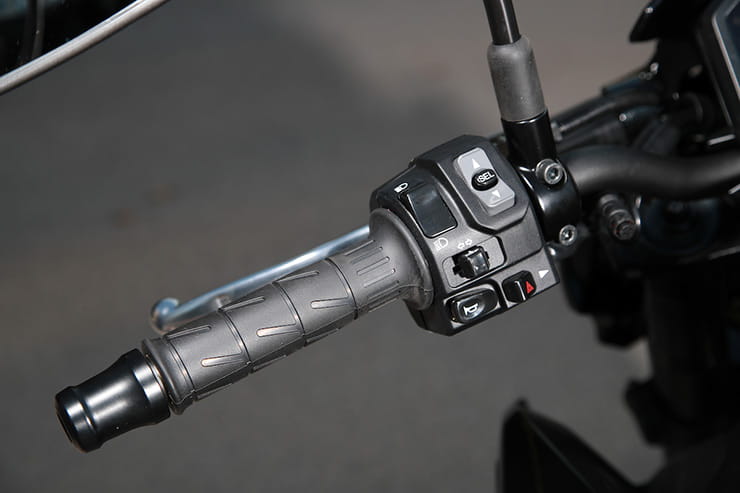 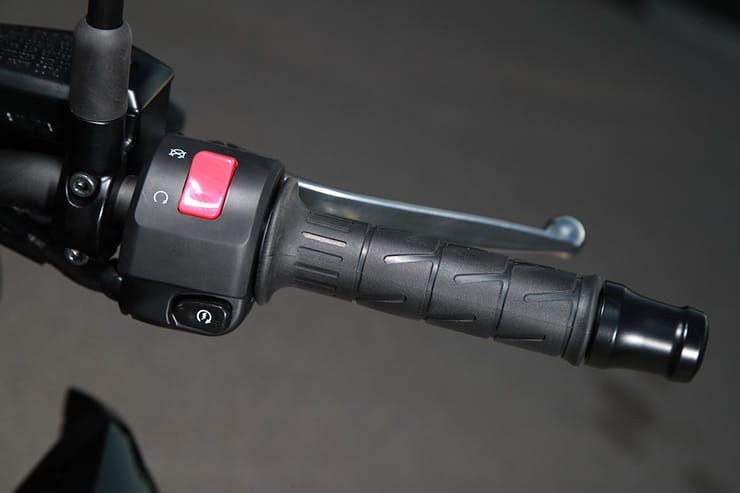 Above: The new TFT display and it’s operations

After a sedate opening to our 250 mile ride over two days which included motorway miles, town riding, mountain road switchbacks and sweeping 4th gear corners thus showing the versatility of the Z900, the resulting average mpg as displayed on the new dash was 5.3l/100km, which equals a hearty 54.3mpg.

Now that’s impressive mainly because Kawasaki claims 5.7l/100km (49.6mpg) and given this was a press ride which are usually a little more thirsty than most other rides. It also means that a tank full should cover more than 185 miles.

Detailed and well styled with substance, poise and a defined character, the Z900 also has a very good quality of finish. The Japanese know it as ‘sugomi’ but I just think it’s pretty hard-looking. Purposeful, not placid. Daring, not docile. Some have commented on social media about the transformer-like looks of the front headlight or "out-of-date" styling but I challenge that by saying this is one of the more iconic and independent looking naked bikes. That very description suggests minimal fairing yet it’s the neat touches such as the fuel tank shoulder indentations or areas around the riders knees to ensure a sturdy riding position that are worthy of seeking out. The tiny fly screen does a stand-out job of deflecting wind at motorway speeds without being uncomfortable – I’ve ridden upright bikes with bigger screens that just don’t redirect the airflow as well as the Z900.

At 212kg, this Kawasaki is the heaviest among its competitors but its beautiful balance shines through in its handling, albeit restricted by some very average tyres. The riding position is roomy enough in a saddle that has a grippy seat cover and plenty of room to move backwards against the raised pillion seat or forwards to the tank. It’s pitched forwards in an aggressive manner but not as much as the Suzuki GSX-S750 and therefore isn’t as wrist-heavy. Speaking of pillions, they'll be sitting so high above the rider that at least that rather uncomfortable looking seat can be off-set by a clear view of the road ahead. 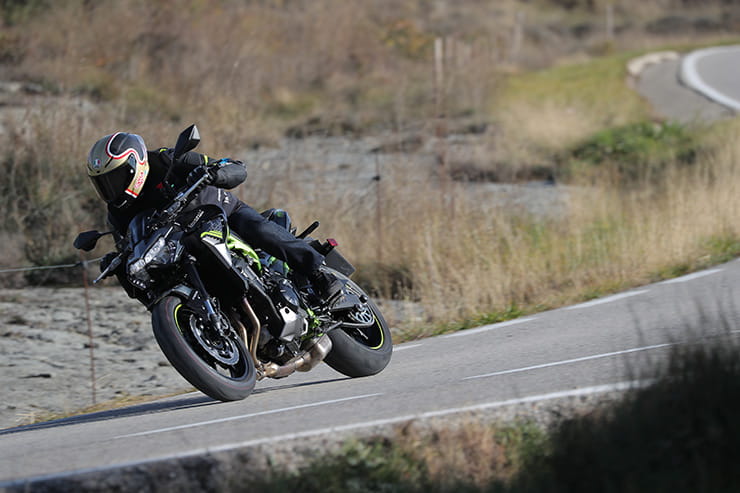 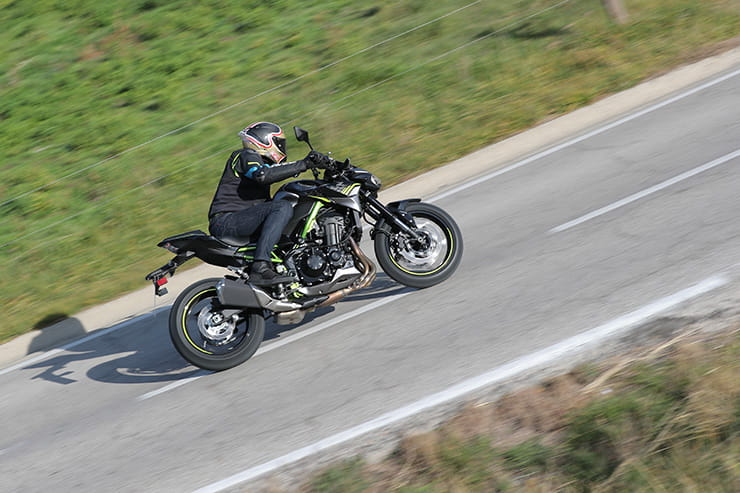 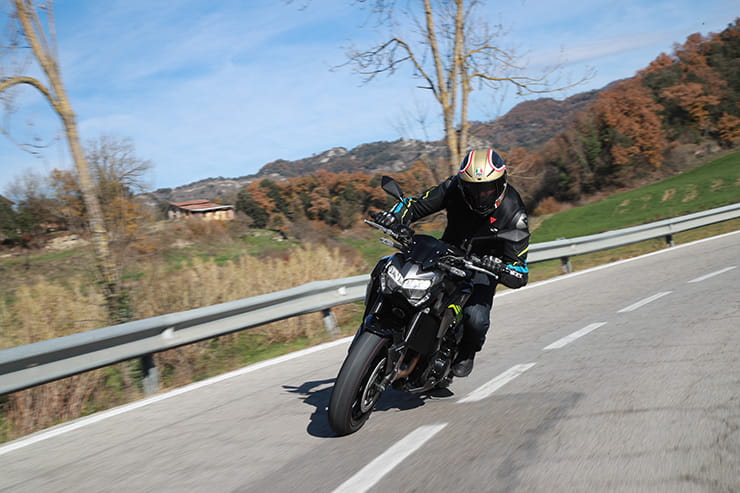 Nissin calipers wrap around twin 300mm petal discs and, given the 212kg weight of the bike plus my lardy bum and erratic throttle hand, I was happy with the quality of the brakes from initial bite to progressive stopping power and lack of ABS intrusion. They could always be a little sharper at that first squeeze but that would come at a cost.

The new 4.3” (10.9cm) gives the cockpit a modern day feel, finally. It’s very easy to distinguish the relevant bits while the colours can be inverted from black on white to white on black with screen brightness automatically switching between three rider-set levels. Riding modes are toggle-able via the grey rocker switch on the left bar and so long as you’re off the throttle, the modes can be changed on the fly. It’s not the most user-intuitive system with a press and a hold required for rider modes, for example, but equally it’s not over-fancy or too complicated and will soon become familiar. Though for a 6-footer like me, means a slight dip of the head to see the whole screen as opposed to being in my peripheral vision.

With no heated grips or quickshifter available either as standard or optional extras then I’m left a little bit disappointed with the suite of electronics on offer compared to some rivals.

Rideology is the Kawasaki app that connects your phone via Bluetooth and allows vehicle info, riding log and general settings to be viewed on your mobile screen while telephone and email notifications pop up on the TFT screen when riding. 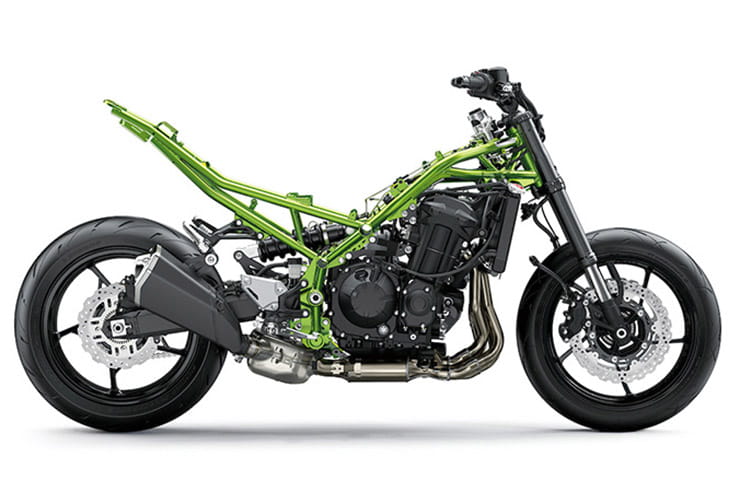 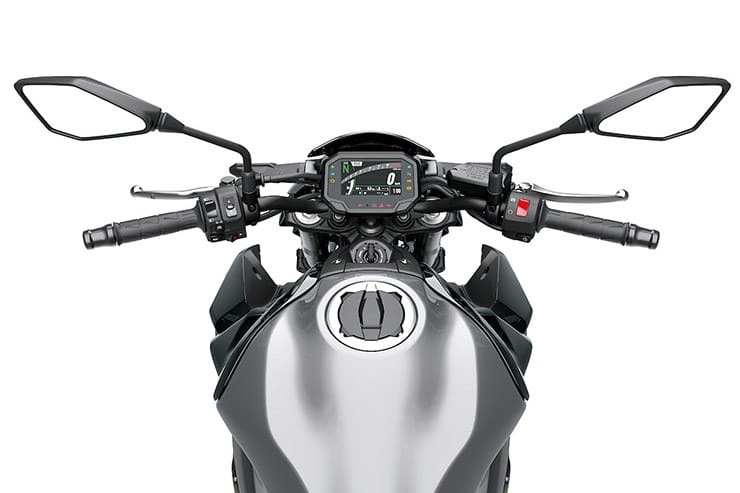 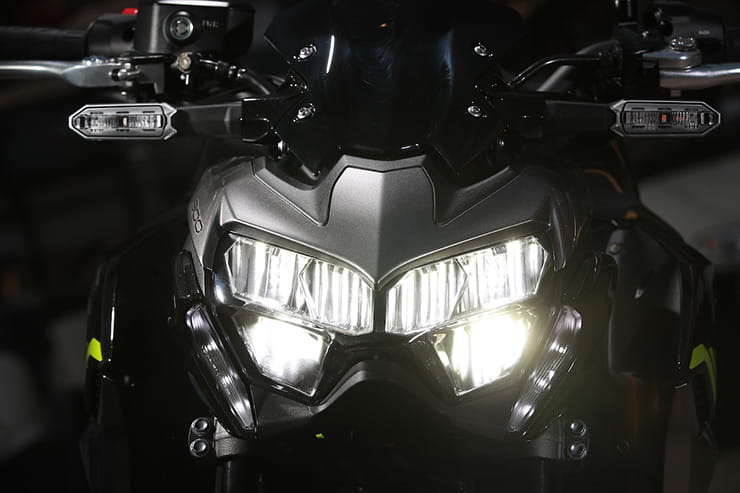 The naked performance class is a heavily populated market offering a range of athletic and punchy motorcycles from but for the below table I’ve opted for a couple of other 2020 models and the awesome Yamaha MT-09.

Suzuki’s GSX-S750 is more of a closer match to the Z900 than its GSX-S1000 sibling and I’ve deliberately chosen to include KTM’s new-for-2020 890 DUKE R instead of the 790 DUKE because of the power similarity, although the 790 would be closer in price. BMW’s more sedate F900R is another new kid on the scene for 2020 while the MT-09 is nearer to the Kawasaki than the loony MT-10 would be. Triumph’s new Street Triple is £1400 more expensive and its electronics are more advanced but still worthy of mention when comparing, as are its stablemates, the slightly older R and S models.

A spec sheet can offer plenty of information from which to make an educated guess at how each will ride but without giving them each a whirl, a guess will all it’ll be. Handling characteristics, braking ability, chassis stability and electronic goodness should all be influential on a test ride.

In a bloodthirsty market where variations in cylinders, power and electronics are close and price points are key, the starting figure of an ‘8’ with the Z900’s price immediately attracts the eye, especially with that terrific and trustworthy in-line four that boasts such an energetic way of distributing 123bhp. It’s a highly entertaining bike when required but is equally adept at plodding around in a high gear relying on the spread of torque.

The upgrades, particularly TFT display, rider modes and TC have brought it into the modern era and are neat touches. At just £1600 shy of the base spec Z1000 and with only a 95cc and 20bhp deficit, it makes you wonder what lies ahead for the larger of the two big Zeds.

The styling is my cup of tea but not everybody’s whereas the sensitive snatch of the throttle might be enough to discourage the town riders. I particularly enjoyed riding the Z900 hard, or as hard as the tyres would allow – the power and chassis balance was rewarding - and it was equally as comfortable and easy going around the slower parts of the journey. It’s definitely worth considering if a naked streetfighter style machine is on your list. 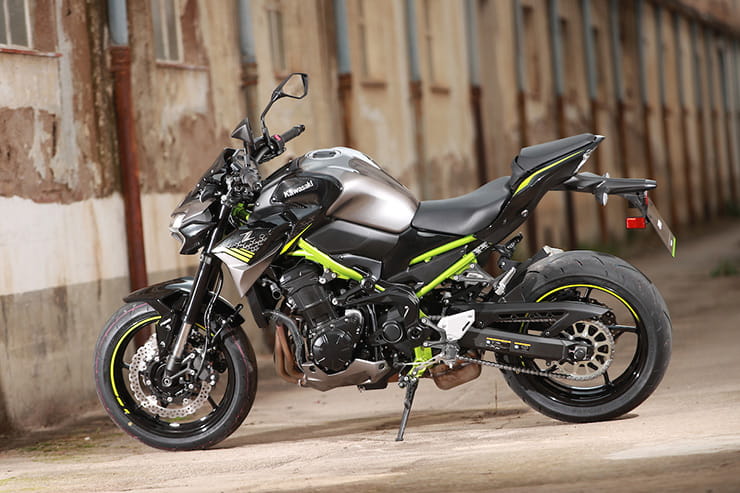 Three things that I didn't… 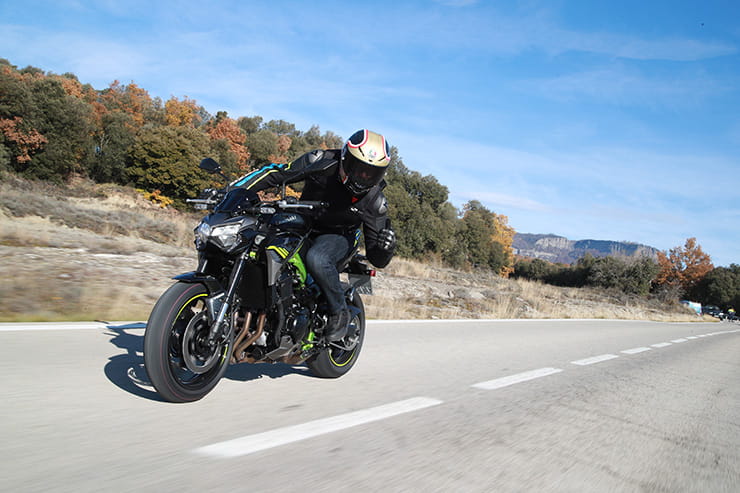