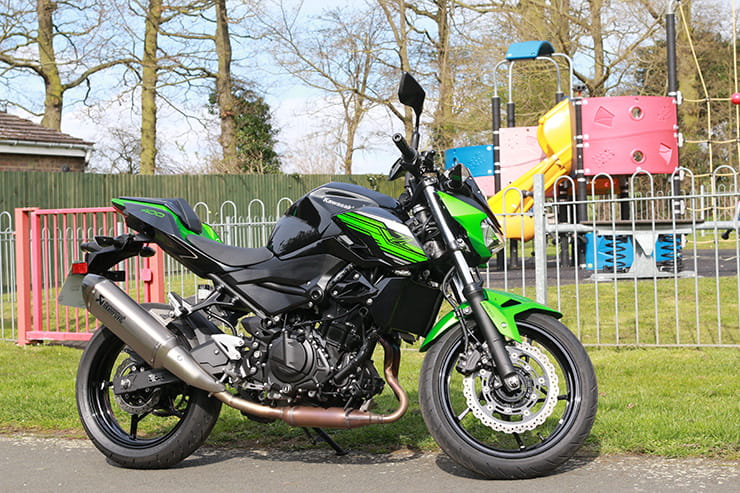 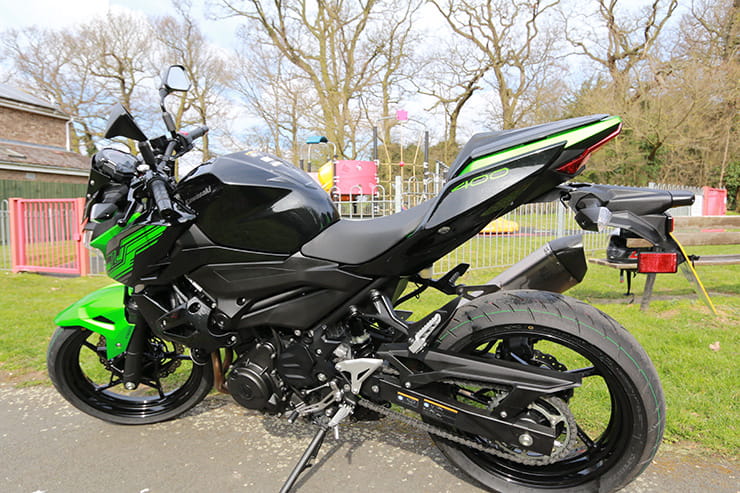 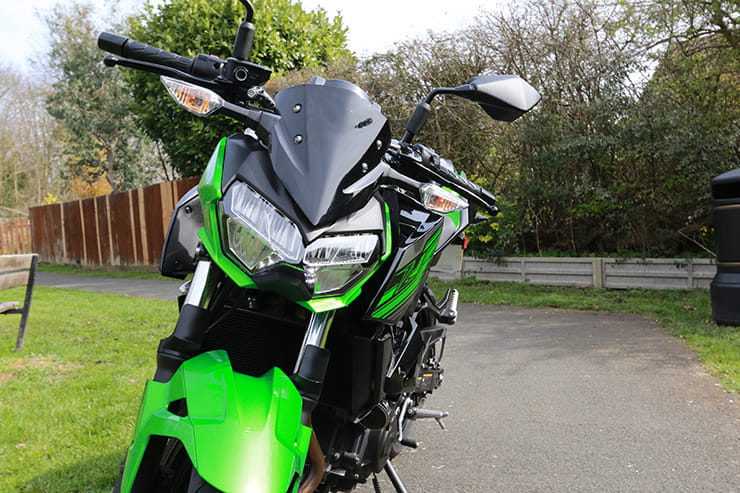 Back in 1997 it was quite normal to spend a week wobbling round town at 50mph on a hundred-kilo 125cc bike doing a condensed training course, before taking your test on that same 125 and then, assuming you passed, rushing out to buy a sports 600 capable of over 120mph, and weighing over 200kg. This is exactly what I did and while, at the time, I considered it an acceptable thing to do, I soon learned that missing out those years of working up through 125s, 250s, 400s and 500s had a massively detrimental effect on my riding. I had been seduced by the relative power and grunt of a 600 inline four when I should really have been honing corner speeds, gear changes, and lean angles on an agile lightweight. A lightweight such as the 2019 Kawasaki Z400.

Spending time with Kawasaki's new naked lightweight has been a revelation, both in terms of what I have missed by not working up though smaller capacity bikes, but also in how improved the bike is over the Z300, which it replaces. We tested the faired 400 Ninja back in the summer, so how does the unfaired bike compare? 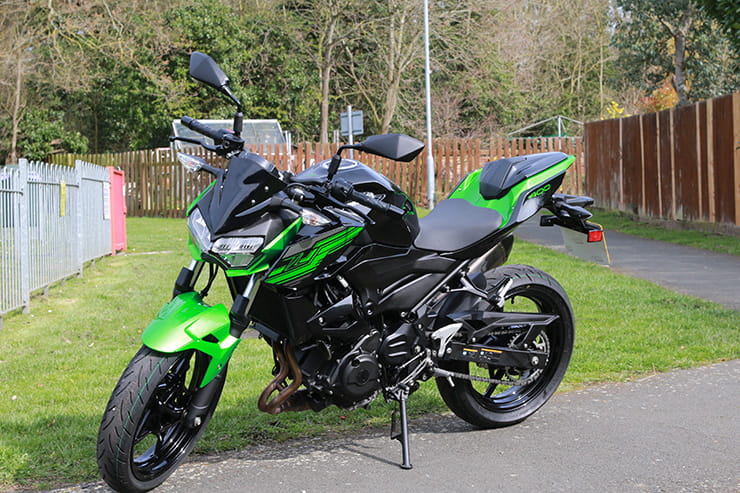 Starting at £4999, the Z400 sits in the middle of Kawasaki's Super Naked range of bikes and is available as the base model, or the model shown here the Z400 Performance at £5499 which includes a titanium Akropovič exhaust (usually £569) and a pillion seat cover (usually £145) giving a saving of £215 over buying parts individually. Despite the name, performance figures for both versions are identical.

If you are looking for a naked A2 compliant bike, there are offerings from most of the major manufacturers from the 286cc Honda CB300 to the Z400, so there should be a bike that suits every style and budget. On paper, here's how the top players compare: 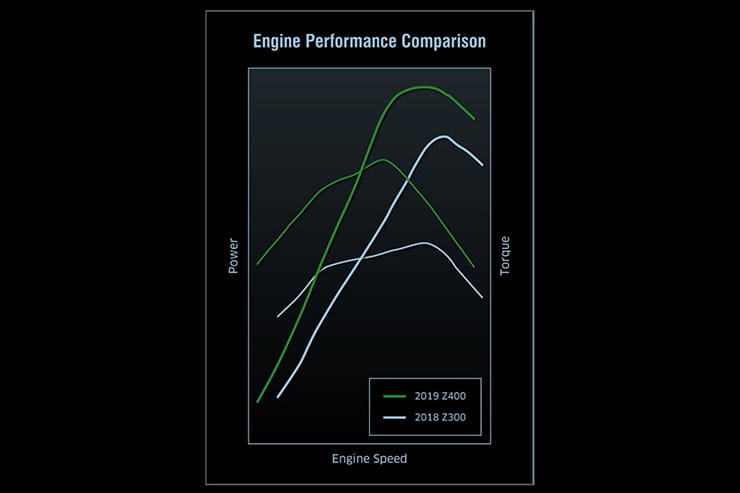 Power and torque are much improved over the outgoing Z300

As you would expect with one of the larger engines in the group, the Z400 is not lacking in power, developing 44.8bhp at a very usable 10,000rpm. This represents a significant improvement over the outgoing Z300 at 39bhp, and on the road it really shows. The Z300 was often criticised for being hard work, but the Z400 is a massive improvement with a significant increase in both power and torque throughout the rev-range. With peak torque coming at 8000rpm, it makes overtaking effortless and motorway journeys painless (I managed the 95 miles from Kawasaki HQ back to BikeSocial Towers in one stint, taking around 90 minutes). 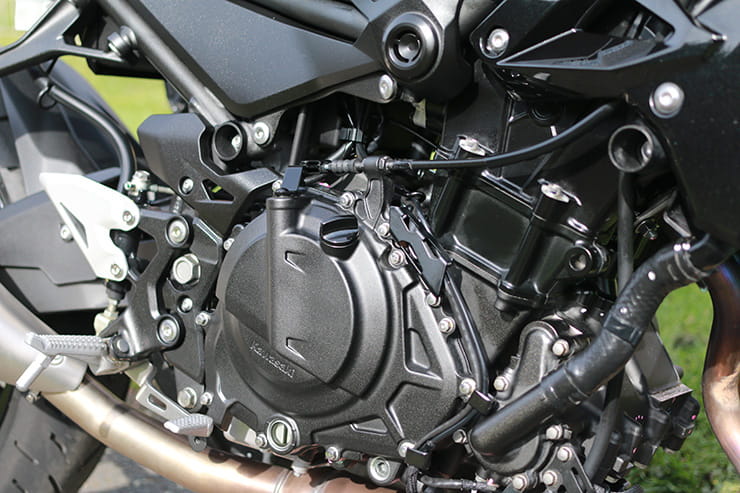 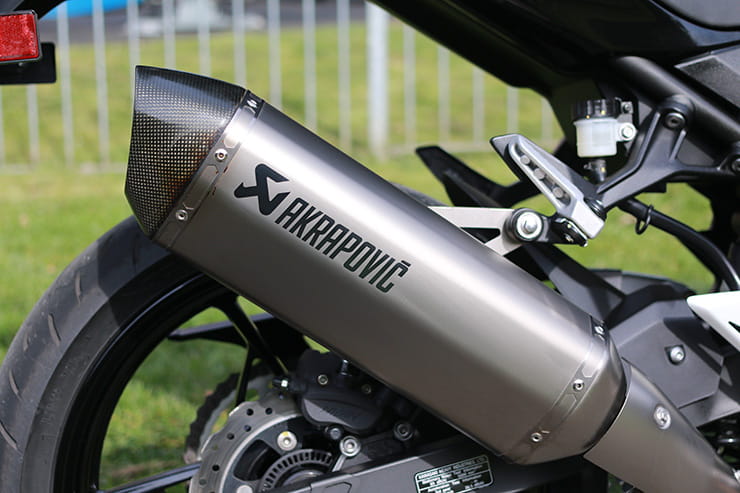 Kawasaki are rightly proud of the all new 400 engine which was designed from scratch to optimise size, weight and efficiency. The new engine is comparable in size to the 250cc unit, despite its much larger capacity. The work and effort put in my Kawasaki shines through right from the first start. While you can never forget that it’s a twin with it's familiar 'putta-putta', once the revs rise, you could be forgiven for thinking that you were on something larger altogether, with a pleasing induction roar, combining with a low exhaust note from the Akropovič titanium end-can, lulling you into thinking the engine has one or even two more cylinders than it really has. All of which makes the bike feel as if it's willing you on, making the most mundane commute an absolute blast.

To take full advantage of a good engine, the gearbox needs to be light and precise and once again, Kawasaki have come up trumps. The Z400 gearbox is smooth, exact and a pleasure to use. While my own Ducati Scrambler seems like one or two gears mixed among a load of neutrals the Z400 was the opposite, with each gear sliding into place with ultimate accuracy. Kawasaki have revised the clutch for the 2019 model, including less rigid plates and a slipper, making the clutch light and precise.

Kawasaki claim a fuel consumption figure of 80mpg for the Z400. While in my two weeks of riding did not see this, I did average of 73mpg over a variety of Fenland B-roads, Peterborough dual carriageways and a small stretch of motorway, that form my daily commute. With a tank capacity of 14 litres, this gives a real-world range of over 220 miles. With some less spirited riding, and more attention to the ECO riding indicator which indicates 'favourable fuel consumption', I am sure that consumption figures in the mid to high seventies could be achieved. 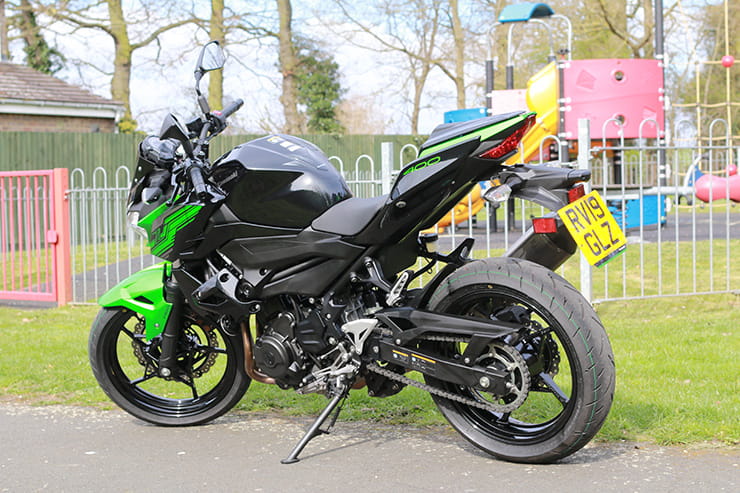 Despite the increased capacity and improved technical specification, the Z400 is lighter than the outgoing Z300 model. This is mainly down to the revised engine and the use of a steel trellis frame over the 300s more weighty rigid diamond frame.  Combined with 41mm forks, over the 37mm units on the 300, all this adds up to a bike that is both stable and sure footed at slower speeds, while feeling light, nimble and agile on the move. It makes for a bike that flatters both beginners and old hands alike and, referring to my opening paragraph, would have made the perfect first 'big' bike after passing my test. That’s not to say that the Kawasaki is just a beginner's bike. The combination of power and handling make it a perfect platform for riders of all ages and experience to hone their skills. 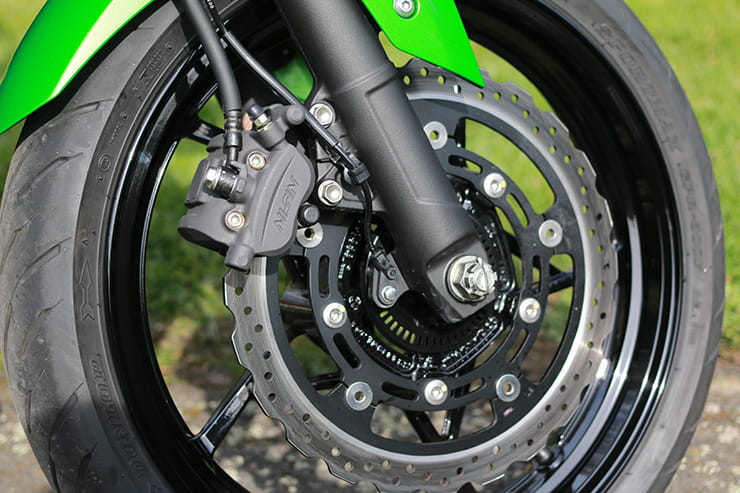 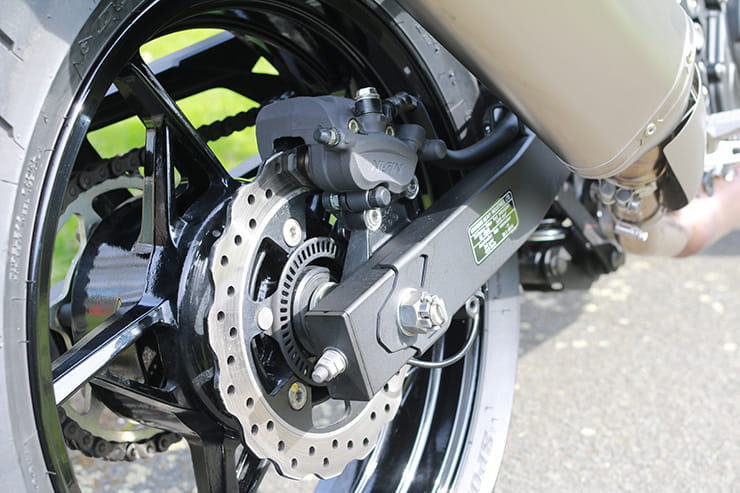 To continue the "faster, stronger, better" marketing thread of the Z400, front discs have increased in size from the Z300, utilising the same size 310 dia. petal discs as the Z1000. This may seem overkill on such a small bike but combined with quality Nissin calipers and ABS front and rear, it all adds to the confidence in the bike that is so essential for an involved and enjoyable riding experience. 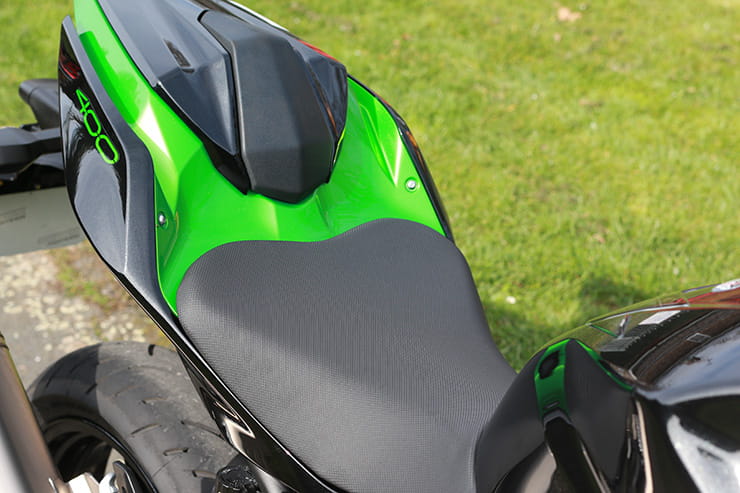 Even though the Z400 is, naturally, heavily based on the race replica Ninja 400, slight changes to the riding position and handlebars have turned the Z400 into a much more comfortable and manageable bike. While not being a full on street-fighter, the Z400's wider bars and more upright riding position all contribute to make it a confidence inspiring and ultimately fulfilling ride. Within just a few miles, I felt that I was in charge, the bike responding obediently. On first sight the hard and minimal seat looks far from inviting, but even after two hours in the saddle, I found it comfortable and supportive. I'm not suggesting that the Z400 would be your immediate choice for a tourer, but if you have some longer trips planned, the mini Kawasaki will take it all in its stride.

As you would expect on an more entry level orientated bike, gadgets and gizmos are limited. We get a large and clear gear indicator, LED lights all round, and ABS. There are no quick shifters, no TCS, no active suspension or anything else to get in the way of you enjoying the ride. Call me a Luddite, but this is exactly what I like in a bike.

A selection of after market accessories are available from Kawasaki including a taller screen (though the mini screen does a good job of wind deflection), a belly pan, luggage and crash protection. Interestingly, there is also a taller seat option, rather than the usual lower seat that most bikes offer, to cater for the loftier riders. 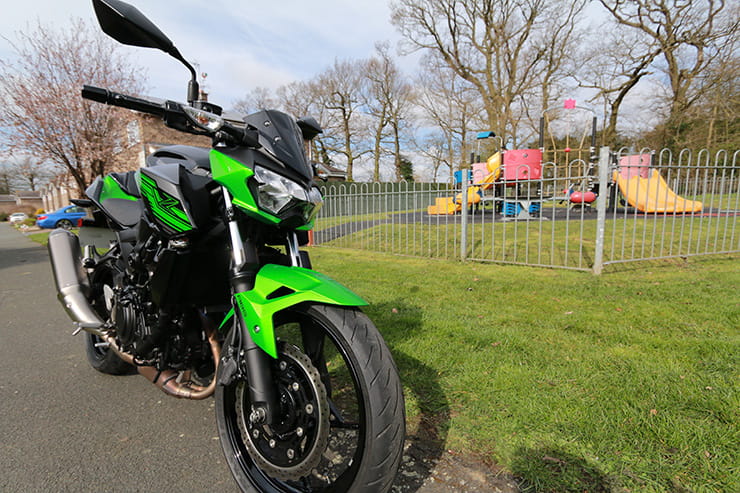 So much more than a plaything, the Z400 is more than enough bike for most riders.

The 2019 Kawasaki Z400 is so much more than a 'beginners' bike. With its free revving engine, sweet handling and aggressive looks, theirs enough performance and handling  to please the vast majority of riders. Don’t get me wrong, it's never going to keep up with bigger sports bike on sheer power and acceleration, but it more than makes up for it in rider involvement. You can feel like you are riding it to the max, while still keeping it legal and keeping your licence. I can honestly say that I would be more than happy to have this as my only bike.