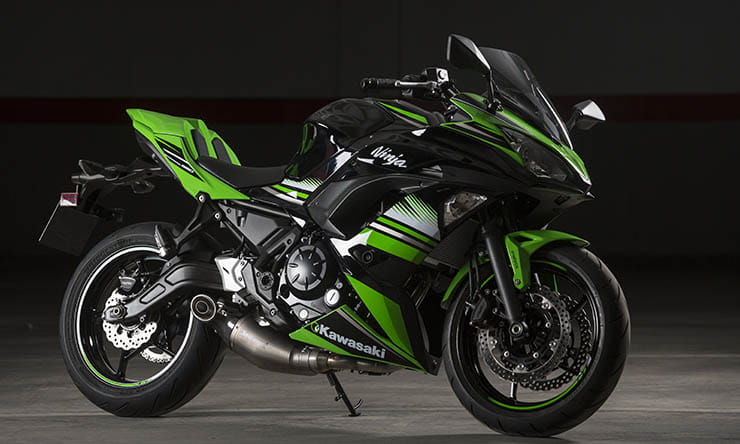 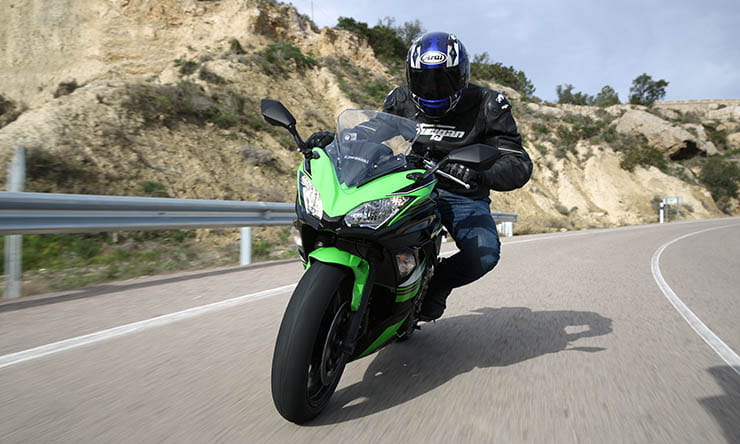 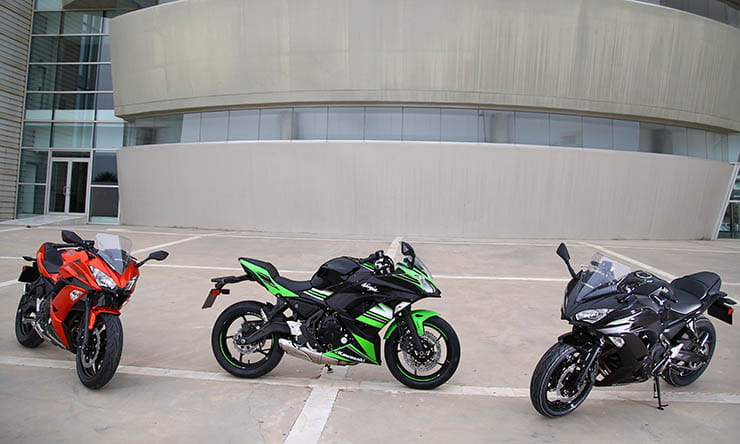 Facelifts are sometimes as disaster, as a glance at one of those depressing websites showing celebrities before and after cosmetic surgery confirms. And in the motorcycle world, even a successful restyle gives no guarantee that the enhanced visual impact will be matched by improved performance when the bike reaches the road.

But Kawasaki’s Ninja 650 is an example of fresh looks and dynamic capability going hand in hand. The Ninja lives up to its name by resembling a genuine mid-sized superbike, its aggressive, fully-faired lines contrasting with the slightly gawky style of its predecessor the ER-6f.

And riding Kawasaki’s new parallel twin challenger confirms that it feels notably lighter and more involving, as its considerably reduced weight suggests it should. If the Ninja were a Hollywood celebrity, it would be a former C-lister who revamped its wardrobe, hit the gym and ended up with a starring role as a result.

Well, a nomination for Best Supporting Actor, at any rate. The mid-sized twin obviously can’t compete for power and glamour with the Ninja ZX-10R, but it does a pretty good job of mimicking its sleek, twin-headlamp-faired lines, and looks especially purposeful in the launch bikes’ Kawasaki Racing Team green and black, rather than the alternative orange or black.

Main giveaway is the pair of bars that stick up above the top triple clamp, rather than down below, confirming that this Ninja is no hard-and-fast track warrior but a softly tuned all-rounder designed for roadgoing versatility and comfort. Like the recently launched Z650, which shares its core components just as the outgoing naked ER-6n and faired ER-6f shared theirs, it is intended for a broad variety of riders including novices, women and those trading down from a larger machine.

Kawasaki’s main incentive for modifying the 649cc, eight-valve ER-6 unit was simply to get it through Euro 4 regulations. That involved numerous internal changes including new cams and reworked intake ports. Outside the motor, the airbox, throttle bodies and exhaust were also revamped. Peak power is down by 3bhp to 67bhp at 8000rpm but Kawasaki says low-rev torque is correspondingly increased. 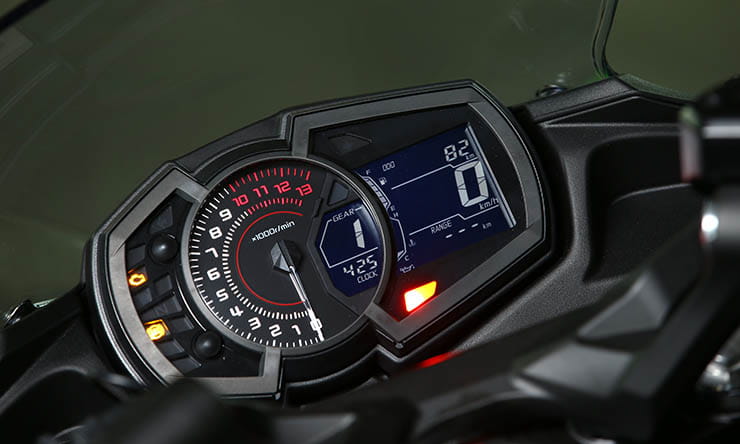 The Ninja certainly felt that way, as it punched out of a seemingly never-ending series of Spanish switchbacks in the hills near Almeria, feeling notably lively for a middleweight Kawasaki parallel twin. But I suspect that the main reason for that was the bike’s light weight. With a claimed kerb weight of 193kg, it has an 18kg advantage over its ER-6f predecessor.

That certainly helped when I cracked open the throttle, as did the Ninja’s accurate fuelling although there was just a touch of snatchiness at low speeds. Once into its stride it accelerated sweetly from below 4000rpm through the gears. It was pleasant and easy to ride at a fairly relaxed pace, which should help endear it to the relatively inexperienced riders that Kawasaki is targeting.

And it stayed fun with the throttle wound open and my head behind the low screen, thrumming up to over 110mph with more to come while I made like a Spanish SuperTwins racer, changing up through the six-speed box as the adjustable shift light flashed, just short of the 10,000rpm redline. The bike stayed smooth, too, thanks to efficient rubber mounting of handlebars and seat, plus new footpeg rubbers with vibration-damping hollow centres. 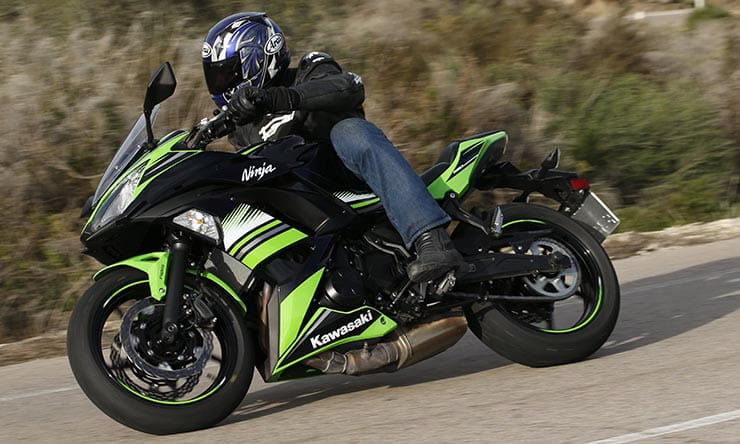 So the revised twin-pot engine works well and gets a performance boost from the reduced weight, but it’s the new chassis and its influence on handling that is arguably the Ninja’s biggest advantage over its predecessor. The old frame with its beefy steel tubes is replaced by a tubular steel trellis that is more than 10kg lighter, at 15kg against over 25kg. Bolted to it is a curved “gull-arm” swing-arm, made from pressed steel, that works the diagonally mounted shock via a new rising-rate linkage, and saves another 2.7kg.

There’s nothing spectacular about the rest of the chassis, but the fairly simple suspension at both ends is good enough to give the Ninja an enjoyably responsive yet well-controlled cornering feel. When ridden hard on bumpy back roads there was occasionally a slight twitch as the damping didn’t quite keep up. But firming the rear with a couple of extra notches of spring preload gave a usefully tauter feel for my relatively heavy weight, and overall handling was well up to par.

Same was true of the braking, thanks to a respectably powerful front-end blend of petal front discs gripped by twin-pot calipers, backed-up by capable ABS. And I also had no complaints about the grip of the Dunlop D21 rubber, which stuck reliably even when the Andalucian roads looked distinctly dusty.

The Ninja even impressed in areas where you might not expect a compact, sporty looking machine to shine. Its small screen gave some welcome wind protection, at least for the chest, and slightly more after being unbolted and moved up by 65mm to its highest position. I didn’t find the bike particularly cramped, despite my height (6’ 4”) and its low, 790mm seat height. But there’s a thicker accessory seat that gives a little extra legroom, which some riders preferred.

Equipment level is understandably basic, but the Kawasaki has a neat looking instrument panel that combines digital speedo and analogue rev-counter, and supplies information including fuel consumption – which, at an average of more than 50mpg even when thrashed, is good enough for a range of close to 150 miles from the 15-litre tank. Adjustable hand levers and usefully wide mirrors compensate for the fact that the simple switchgear means the display’s info can’t be toggled from the handlebars.

There are also plenty of accessories to make the Kawasaki more practical, including a Touring package of larger touring screen, semi-rigid panniers, tank pad, knee pads and frame sliders. That adds £600 to the Ninja’s basic price of £6349 (or £6549 in race team green/black paint). Alternatively, there’s a Performance Edition that costs £7299 (again, £200 more in Kawasaki Racing Team livery) and adds a smoked flyscreen, tank pad, pillion seat cover and Akrapovic silencer.

There’s plenty to like about Kawasaki’s cleverly updated middleweight challenger, which refines its deservedly popular ER-6f predecessor’s parallel twin engine, mounts it in a notably lighter and sharper-handling chassis, and tops the job off with an infinitely more stylish set of clothes that contributes hugely to the new Ninja’s appeal.

But it’s important not to be deceived, because despite its racy look the Ninja 650 is not intended to be a sports bike; it’s more versatile than that. The compact parallel twin is a sharply-dressed, rider-friendly, enjoyably quick and sweet-handling all-rounder – and a competitively priced one, too.