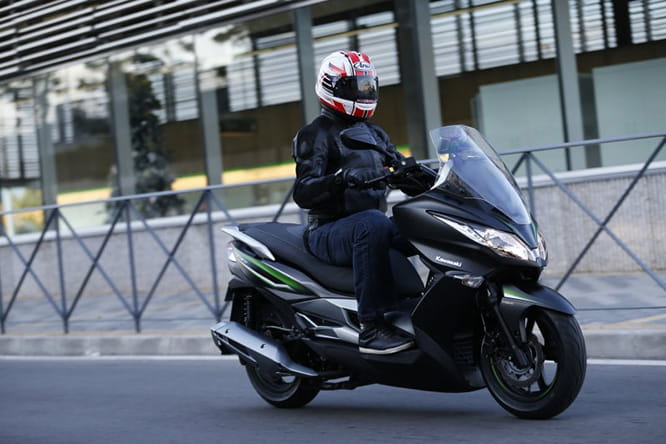 Each month when you see your competitor’s 125cc scooter dominating the new sales charts, it can become a little disheartening. So what do you do? Build one of your own of course. Or, in this case, gets some mates to help you out.

Taking the fight to Honda and their hugely successful and mega sales generating PCX125 is Kawasaki’s second-ever scooter in the European market, the J125.

However, Kawasaki’s first foray into the 125cc twist-and-go market is of course a larger and more luxurious beast than the PCX. Priced from £3799, available in the UK from late January and based heavily on the two-year old J300, the J125 actually becomes more of a challenger to the larger Honda Forza (£3999) instead of the PCX while from Yamaha it would be more XMAX (£3799) than NMAX and from Suzuki's corner the J125 would face the Burgman 125 (£3499).

Bike Social was invited to the world riding launch of the 2016 model taking place in Malaga, Spain covering 62 miles of dual carriageway, city street and urban roads. These allowed plenty of different scenarios and surroundings in which to test the capabilities of Kawasaki’s new commuter-wagon. 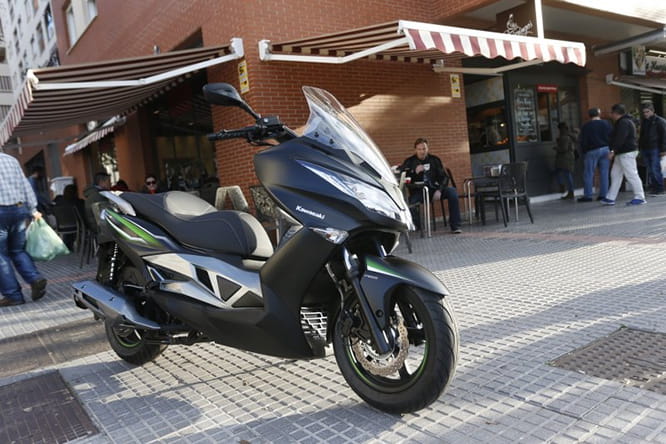 The A1 licence friendly scoot was styled and designed in-house at Kawasaki yet the drive train and some of the chassis elements come from Taiwanese-based Kymco, the Japanese firms ‘strategic vehicle partner’. The same collaboration produced the J300 and ‘if it ain’t broke then don’t fix it’ seems the approach with the smaller capacity version because it also shares several convenience features with its big bro, namely ABS brakes, automatic under-seat courtesy light, shutter style security ignition and a 12V charger socket.

The main physical change is of course the liquid-cooled, fuel-injected, fully automatic, 4-stroke 125cc engine. Still pokey enough with 13.8 bhp to swallow up the daily commute and shorter trips with ease.

Aimed at opening up the market to young, inexperienced and even non-motorcyclists, Kawasaki have expanded their twist-and-go range now that the J300 has been around, and outsold Z300, for two years. Scooter like this 2016 model from Team Green make a mockery of the expensive and overcrowded city commuting options around the world, massively undercutting the cost and impracticalities of cars, buses, tubes and trains. To me, the economy, convenience and fuel-savviness of the J125 and its rivals are simply the best way to get around towns and cities. I lived and commuted in London and did the majority of my travelling on a Yamaha XMAX 250, which I can say without hesitation, made my experience of living in the capital, far more enjoyable.

On paper the J125 at 182kg is a whopping 20kg heavier than the Honda Forza and 9kg more than the Yamaha XMAX. For a new rider the size and weight when manoeuvring the scooter at no or low speed may provide a hurdle that will end up holding them in good stead if or when they move onto a larger machine. Thankfully the weight is barely noticeable when on the road because its very well balanced and handles the city streets well.

The rather stylish J125 feels stable, it doesn’t wobble or stray under full acceleration or hard braking either. The steering through the tall, upturned bars is alert, direct and light which was tested in and around Malaga when avoiding loony Spanish drivers, man-hole covers (for the sake of it) and debris. 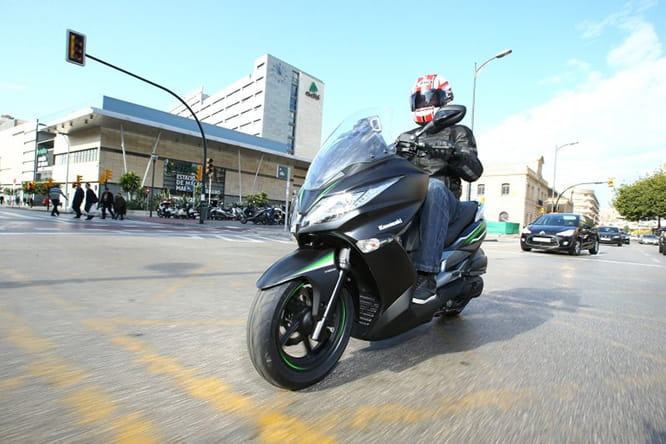 The liquid-cooled 4-stroke, 125cc engine is spritely enough and had the beating of many other scooter-commuters off the lights. Its free-revving though, even at idle the motor ticks over at 2500rpm then cruising at 35mph the needle hovers around 6250rpm making it feel and sound like the automatic ‘box should be in a higher gear.

Pin the throttle from a standing start and the 13.8bhp is delivered smoothly through the Continuously Variable Transmission (CVT). Fine, it’s not going to blow your socks off but its more than adequate for towns and cities plus a few dual carriageway miles if required. The J125 eventually runs out of steam by 70mph but sits there comfortably on flat roads. Around some of the faster, sweeping bends and the 14” front wheel and 13” rear equipped as standard with Maxxis iPro tyres dealt with everything with aplomb, achieving some complimentary lean angles that scooters aren't necessarily designed to achieve. Momentum on a 125cc is key on the faster roads and the J125's suspension, chassis, tyre combinations allows you to carry good corner speed without scrubbing off too much and therefore loosing everything you've built up over the last 1/4 mile! Only one one occasion on a roundabout taken at speed did the scooter ever feel like sliding. 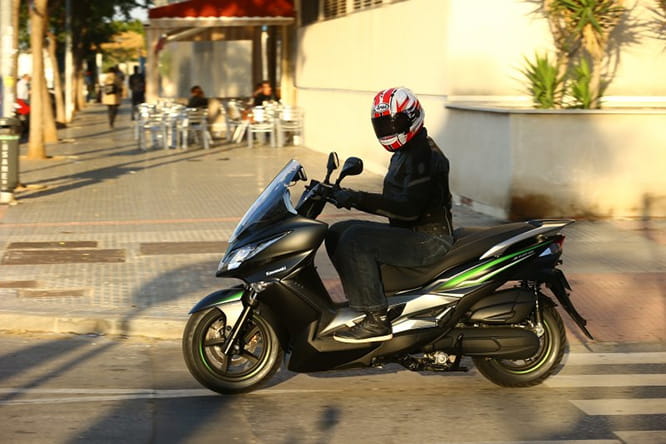 ABS is fitted as standard but is quite intrusive on the rear if you squeeze the adjustable lever with any vigour yet it complements the front brake well. Use a combination of both and the J125 will not only stop quickly but with stability too.

The twin rear suspension is adjustable for pre-load through five-stages and easily operated simply by twisting the spring. Clockwise stiffens it and I altered it to maximum half-way through the ride which was highly beneficial, smoothing out the smaller bumps of the older street surfaces.

Of course it’s designed for comfort and economy over performance and the Kawasaki doesn’t disappoint. Even after 60-odd miles of enthusiastic riding and stop/starting around Malaga’s plethora of traffic lights, the digital fuel gauge didn’t drop a bar. The 13 litre tank is 1.5 litres larger then the Honda Forza and is positioned low down to keep the centre of gravity aiding the scooter’s balance.

The one-piece, two-tier saddle has plenty of padding and is very comfortable. An 8" lip behind the rider allows a pillion to sit higher while the rubber, fold-out pillion pegs add to their comfort. When I first saw the low fly screen I wondered how much wind protection it would offer and I was pleasantly surprised. There is a high screen available as an optional extra which would be useful in rain or snow but I wasn’t left wanting for it in the 19 degree December warmth in Spain on the test.

The flat floorboards include cutaways so the shorter rider can easily touch the floor and manage the scooter. Though I felt a little restricted with options of feet positions, the Kawasaki’s were grippy and contributed to a comfortable riding position. In fact the large rear view mirrors are also worthy of praise given the ease of adjustment and by doing their job well. Yes, I could see behind.

Convenience features including the vast under seat storage and glove box come straight from the J300. The seat lifts and stays in place using a damper and is large enough for a full face helmet and other luggage such as a handbag or small rucksack, it also includes an automatic LED light and has a maximum weight limit of 10kg.

While in the non-lockable glove compartment, a 12v power socket can be used for charging a mobile or powering a sat nav. The downside is that if anything is plugged in and used externally to the compartment such as a sat nav, then the position of the socket makes the compartment unusable. 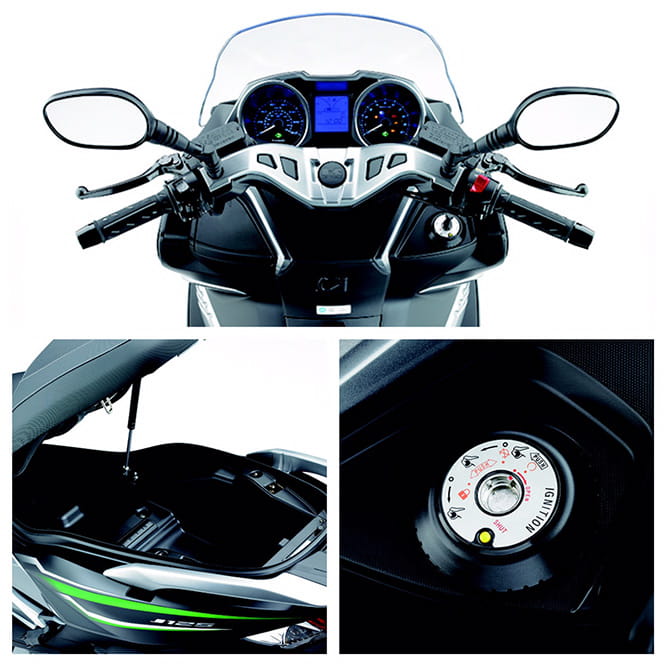 While we didn't ride at night on the launch, the twin headlamps are large and almost Ninja-esque in terms of styling. The scooter does look good from the front, more imposing than one might expect from a 125cc.

Twin analogue clocks proving speed and rpm information flank a digital display with the usual features; clock, two trips, odometer plus both fuel and coolant gauges. However, the three rubber buttons underneath used to adjust the options are tricky to get a gloved hand to behind the raised handlebars and then require a two-second hold to toggle through the options. 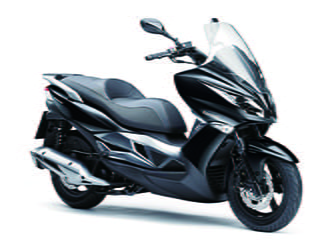 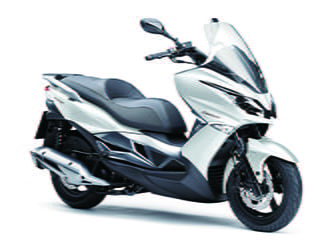 Are you a scooter-commuter? Which do you ride and why?