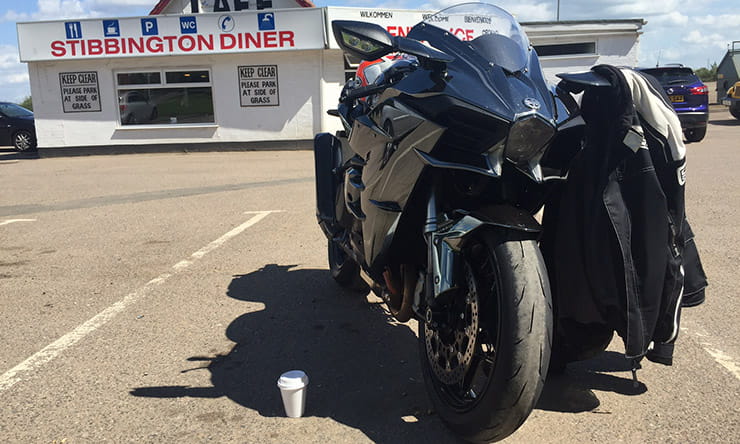 Our man Scott Redmond is a real life wheeler dealer. A lifelong rider, he prides himself on a bargain and has never bought a brand new bike. That's why, each week, we send him out on a new bike to get his real world views on the latest models. Far from being a pampered journalist, Scottie's more interested in things like value for money, comfort and fuel consumption. So what he'll make of this week's 200bhp, £22,000, supercharged Kawasaki Ninja H2 is anyone's guess...

There I was killing time, just about to fit the heated grips to the Grand Designs ZZR, when I got a message from Wheels Motorcycles, my local Kawasaki dealer.

Having seen my tests on Bike Social, they were wondering if I fancied a few hours with their demo Kawasaki H2. The world's quickest 'yes' was returned!

The H2 and its sibling the H2R are the most powerful bikes you can buy over the counter with a full manufacturer's warranty. The H2 retails for £22,000 and the R spec bike, which is not road legal, is just under double that.

With Santa Pod shut and a few hours with the key to the Battlestar Gallactica looking bike, I thought I’d find out what one of these beasts is like out in the real world.

Up until now I've only ever seen them in captivity. This was like the zoo belling me up and asking to babysit their tiger for the day. 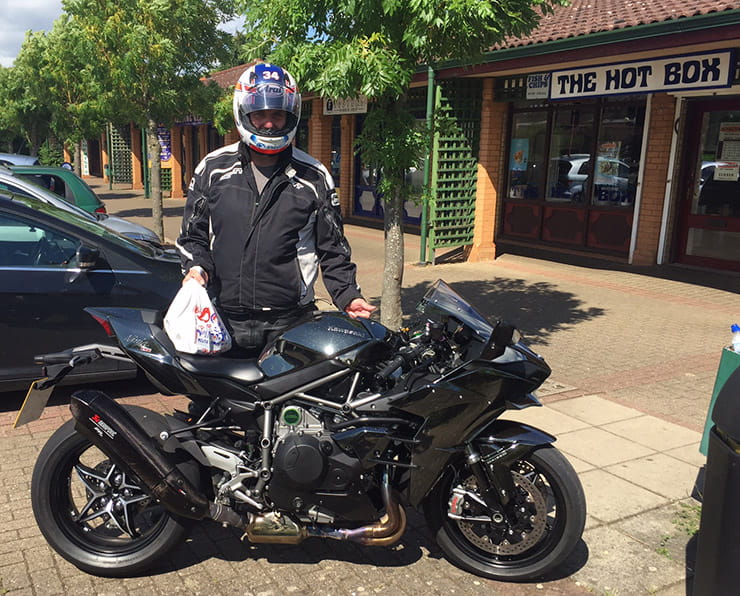 Arriving at Wheels, I got a tutorial on the H2's flight deck. Given the options, I left traction control on and didn’t opt for the quick shifter. After all, Peterborough's Frank Perkins Parkway is hardly Laguna Seca. Handover complete, I was let loose to enjoy and do a few Friday afternoon chores.

The first few miles on any unfamiliar bike always feel like a bonding session, with the Kawasaki and I getting to know each other. The very first impression I got of this beast is how normal it feels. For a supercharged bike that spits out over 200 thoroughbred horses through its 200 section rear tyre, it didn’t feel strange pottering through the back streets that funnel towards the city centre.

It burbles on tick over just like any other four cylinder bike you’ve ever ridden and the bark from the carbon Akrapovic can is loud, not offensively, but way up on a standard exhaust set up. With the sun out on a day that was forecast for 50/50 showers, I thought I’d head for the A1 and stretch its legs. The riding position felt comfy, so my legs were good for a while. The bars are low, no doubt to aid you in tucking in behind the screen when giving it the gun.

The boring road friendly stuff was all perfect, excellent mirrors and easy to use switchgear, although the mirrors do look like they’ve come from a Volvo 740 that tows a caravan most weekends. They are really wide, and no doubt part of the aerodynamic package, although my venture along the A47 was not putting them to any heavy duty test. With a strong blustery side wind I just kept myself focused on staying in my lane. Being on someone else's £22,000 motorcycle is good for the focus too.

Once on the A1 I pointed the H2 north and wound it up. The supercharger spun itself stupid and the speedo digits went up like a fast forward scene from an '80s sci-fi film. Flipping 'eck its fast.

It’s by far the most powerful motorcycle I’ve ever tugged the throttle on, and after nursing my 56 horses that the Grand Designs ZZR puts out, you can appreciate the difference at my disposal. The chassis keeps things moving forward, even when you climb to the crest of the rev counter there’s no fuss from the bike beneath you.

The brakes are superb, and the best bit is the whine from the charger. I was informed that the inner gubbins of the charger spin faster than the speed of sound. Now that’s impressive technology.

I arrived in Stamford almost before I’d left, with the sun now shining and rain looking less likely I had an ice cream to celebrate.

Sat staring at the H2, I saw it in a different light. In the showroom, it really is like looking at a caged animal, just another exhibit, yet away from the florescent lights and hustle of the shop you can actually see how crazy the styling is. It is like a concept bike in lots of ways. The supercharger is something that many manufacturers flirt with on design programmes, stealing cheap headlines with their propaganda, but Kawasaki have delivered it to a showroom near you. Good on ‘em.

The styling is still something I struggle with. The jaunty angles of the fairing look confused to this bystander, but the metallic finish really comes to life in the real world sunshine. The seat unit is pure Hang On arcade game material, and actually really comfy. I’m baffled why it isn’t painted in Kawasaki lime green and try to imagine it as if it was. Maybe that was too obvious?

Badges are kept to a minimum, it doesn’t shout about its muscle. The dinky badge on the supercharger is as loud as that gets.

With my 99 consumed, I jump back on board, hit the starter and alert Stamford I’m on the move with the rasp of the exhaust. People look, OAPs stare and kids point, it’s that type of bike.

Taking the A1 back south, I again pull the throttle open. The H2 just propels me forward, faster than I’ve ever been before. I had to get off the A1, otherwise I’m sure I’d have ended up with points. Going along the lanes was fun but highlighted how front heavy the H2 feels. Slow speed manoeuvers feel cumbersome, but the H2 isn’t here to be a chip shop bike, it’s the pinnacle of Kawasaki road bikes and bursting with character.

The whistle from the charger is addictive, shutting off the throttle gets the vanes chirping away, like a bird song but much, much better. I ventured to see Michael Mann at the Bike Social offices. After all, if you don’t show your mates what you’re riding, what’s the point?

Michael appeared and came outside for a nose. He then started it up, gave it some revs and set of some car alarms in the car park. We ended up waving to smiley faces from inside the building who had rang him to see what he was playing at. That’s what the H2 is capable of, brightening up your day up, and that of others.

With the sands of time against me I bid Michael farewell. My next stop was for fuel, the dash had been informing to get some juice for a while, and the thought of running out had become a reality. Thankfully I nursed the Ninja to the garage. It was 5pm and busy with white collar folk fuelling up their sensible cars. How extreme did I feel?

The afternoon had flown by. I’d seen a friend, had a 99 and ridden the most powerful road bike on sale. I’ve had worse days, as I headed home to winter proof the ZZR.

Thanks to Kawasaki for building the H2 and to