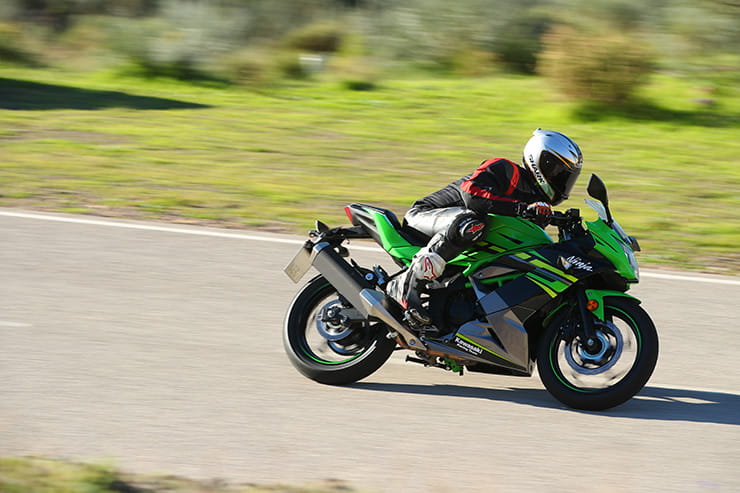 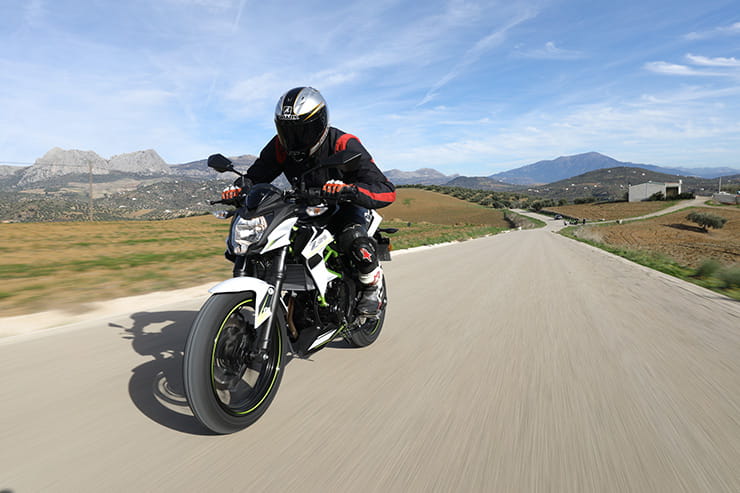 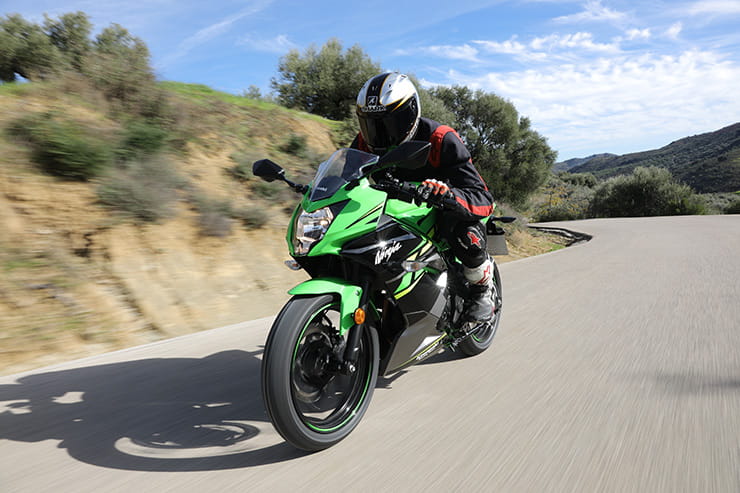 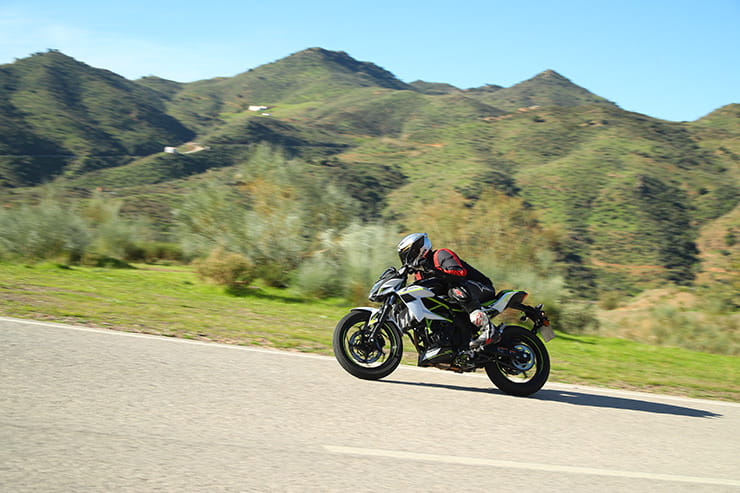 It’s been nearly 30 years since Kawasaki’s previous sports 125 – the last AR125 was sold way back in 1991. So you could say 2019’s naked Z125 and faired Ninja 125 are so long overdue, Kawasaki have effectively missed out on a whole generation of teenage riders in the meantime.

But that’s now been fixed, and the Z125 and Ninja 125 arrive in 2019 to complete Kawasaki’s Z-series and Ninja line-up – with that crucial A1 licence step into a lifelong career in biking. BikeSocial is at the launch in Malaga, Spain, to find out exactly how much Kawasaki DNA is in the new 125s. Turns out there’s quite a lot of existing Kawasaki in them. 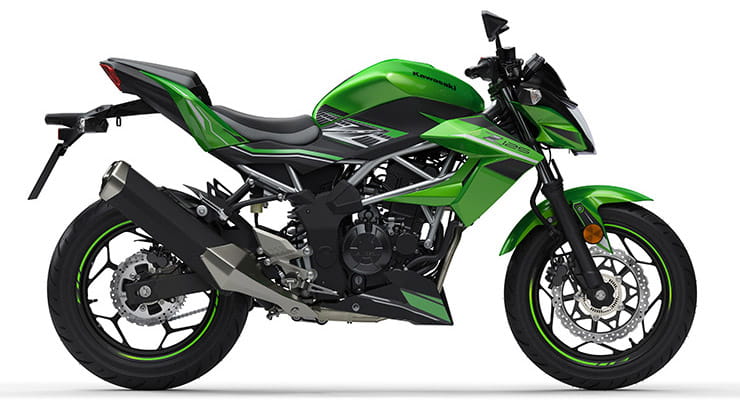 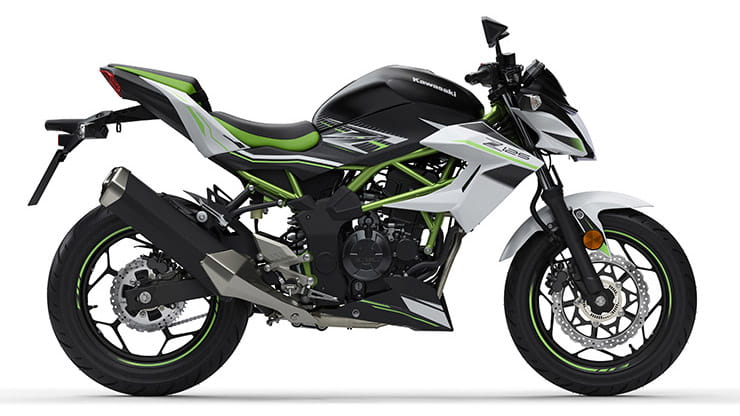 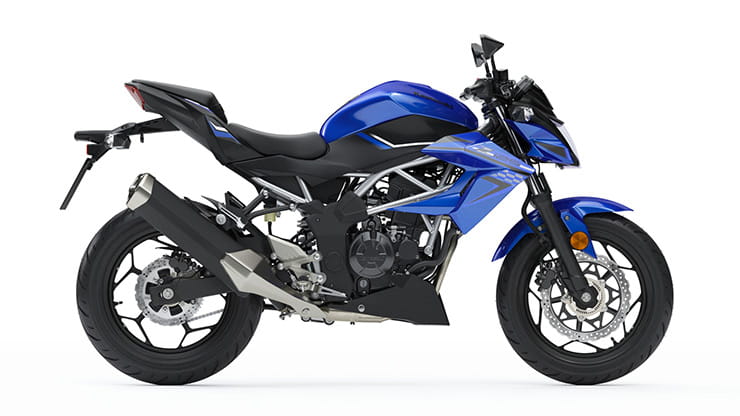 All models are in dealers now 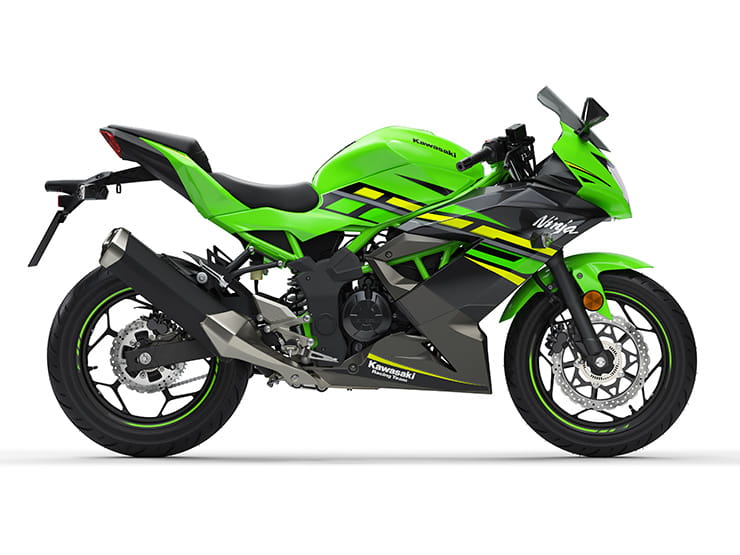 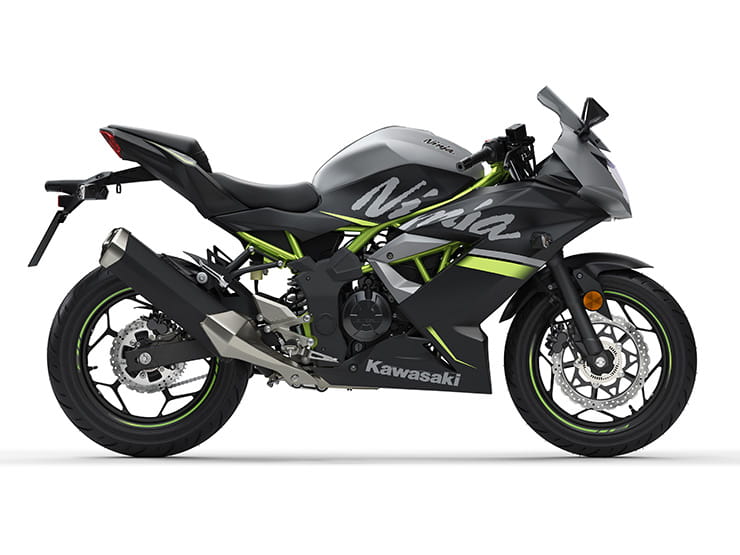 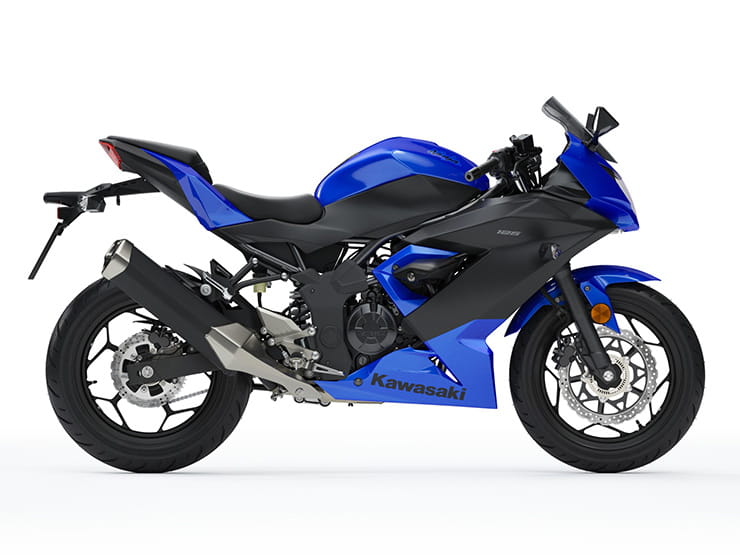 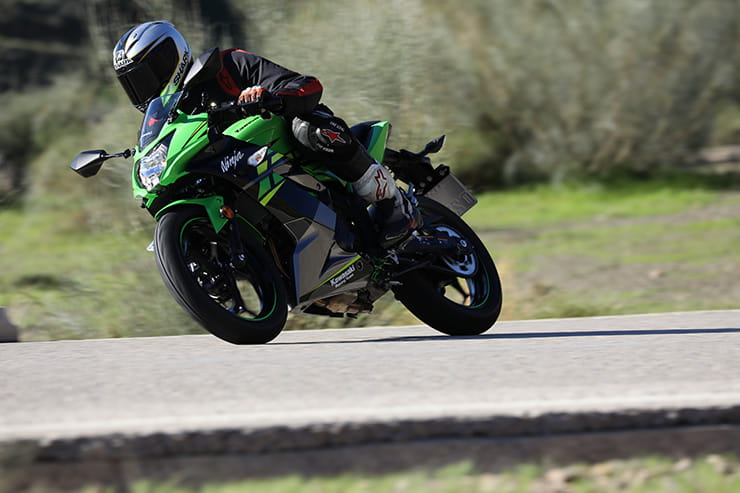 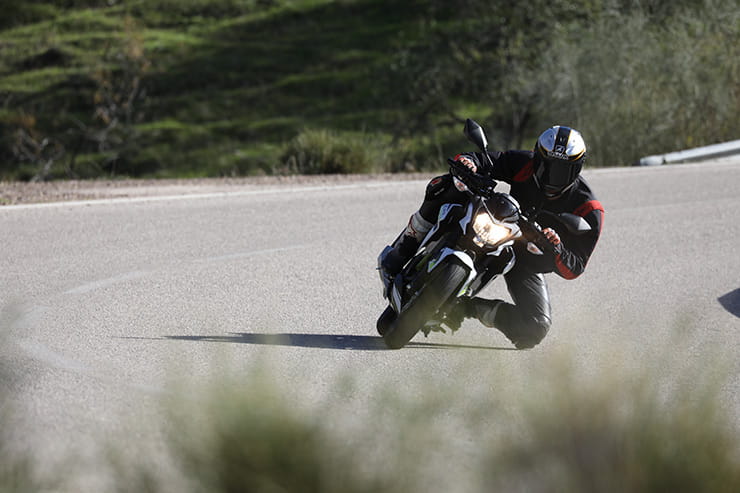 It just so happens the bike I rode the day before swinging an early-onset arthritic leg over the Ninja 125 and Z125 was another Kawasaki. It had 200bhp and a supercharger. So you’d think the transition to 14.8bhp, some 92 per cent less, would be a shock.

The Ninja 125 and Z125 share the same engine and gearbox. It’s essentially a sleeved-down 28bhp Z250SL motor, which means it’s massively under-stressed, if otherwise conventional: four-valve, four-stroke single cylinder, well over-square at 58.0mm x 47.2mm. With peak power at 10,000rpm and peak torque nearby at 7700rpm, this suggests the Ninja 125 and Z125 will be rev-happy chappies.

And so it proves. I start the day on the Ninja 125, and lugging my 15-stone carcass away into the chill Spanish air requires a big dose of clutch-slip – it’s reminiscent of a twist-and-go scooter – before the engine hooks up into its narrow powerband and produces a fair smattering of drive from 6500rpm and above. Keep the revs up and there’s plenty of go to keep pace with town traffic, and enough off-the-line zip (with tons of clutch slip) to boogie away at the front of the traffic lights without holding anyone up.

As Malaga’s busy streets give way to a gentle dual carriageway climb upwards towards the mountains north of the city, the Ninja’s A1 licence power cap becomes more apparent and at 60mph, with the single cylinder buzzing like a chainsaw, there’s not a great deal of headroom left for overtaking without planning well ahead. The Ninja really takes a merciless thrashing to keep its speed up, and there are some combinations of incline for which there’s no appropriate gear; third, say, is too high and bounces into the 10,500rpm rev limiter, but go up to fourth and the speed and revs will gradually drop. Yup, it’s got a powerband like a two-stroke. 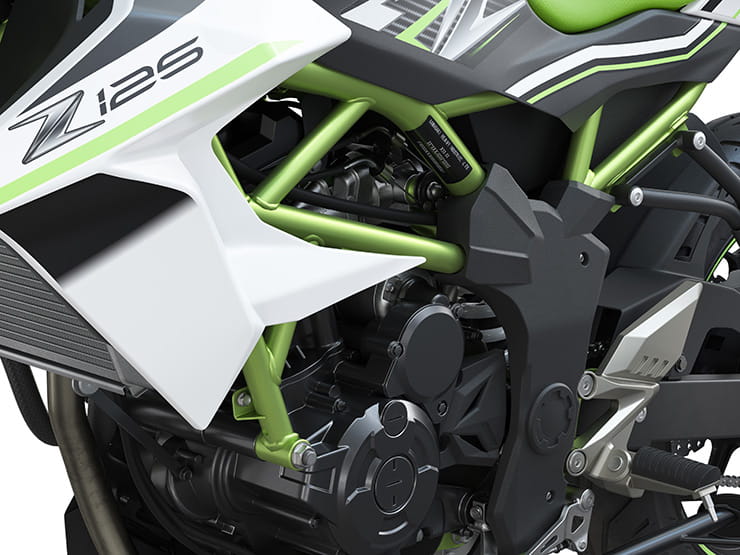 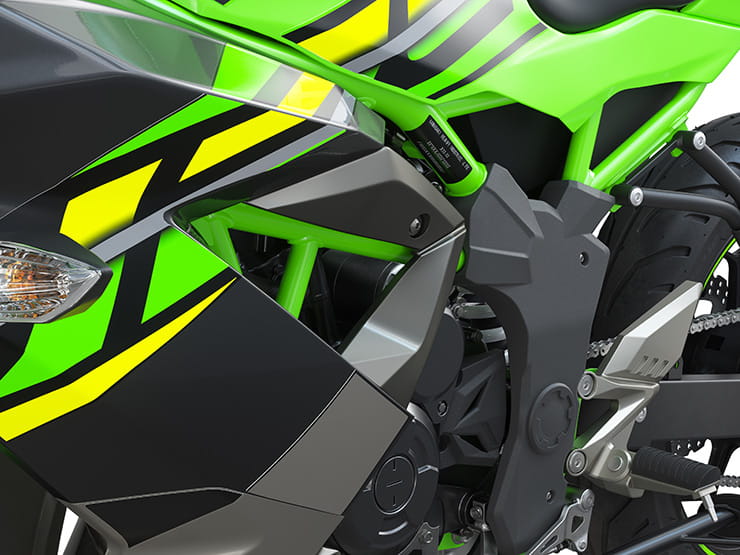 But as the ride moves higher into the mountains, and the road get slower and twistier, suddenly the Ninja’s natural performance limitations – those that afflict all 125s, not just Kawasaki – become a positive. Riding the Kawasaki becomes the breathless, flat-out game of keeping it pinned, familiar to all teenagers; you don’t want to shut off, brake or knock it back one because you lose precious speed. It’s too easy, on a full power bike, to botch a corner and regain momentum. On the Ninja 125, man you have to work for it. And it’s so rewarding when you get it right. You just need to find the right road. Even full throttle gearchanges (through a stiff but reliable box) are an opportunity to preserve a few revs – the Ninja and Z125s don’t have a quickshifter, but keep it nailed until the motor bounces off the rev limiter and it’s the same thing.

The Ninja and Z125’s motor isn’t the smoothest unit – at around 7000rpm a strange harmonic resonance appears, like two sine waves interacting. Several times I thought I was being followed by a police car, sirens going. An optional Arrow end can improves the sound.

With exactly the same engine as the Ninja, you’d expect the Z125 to exhibit exactly the same performance and feel, and it does. There’s slightly less mechanical noise than the Ninja; the sportsbike’s fairing probably amplifies the sound of an espresso cup-sized piston averaging 35mph ping-ponging back and forth across a two-inch gap. It’s one of the disadvantages of a high-revving engine as opposed to, say, Yamaha’s under-square YZF-R125, which does what the Kawasaki does, only at lower rpms.

Top speed of both bikes is just over 70mph, limited by the 10,500rpm rev limiter in top gear. 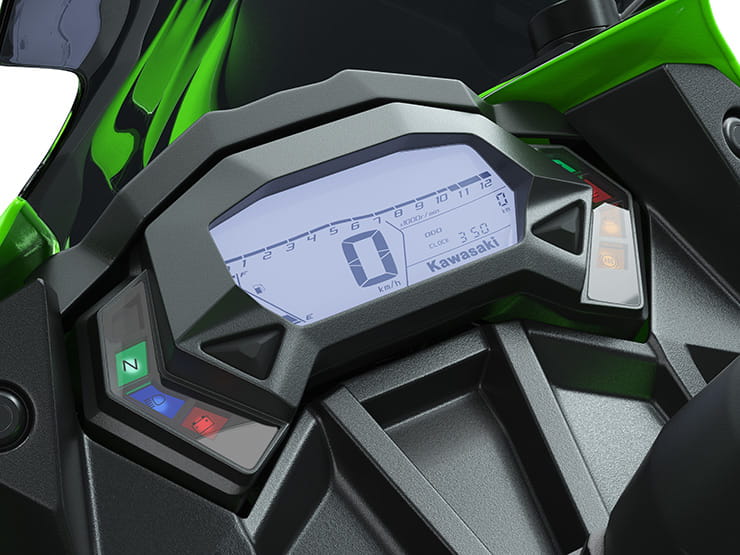 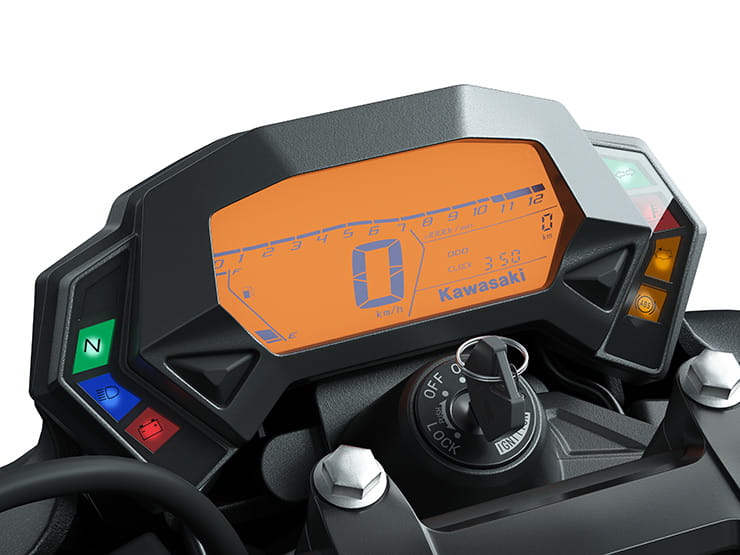 The Ninja and Z125 share the same 11 litre tank (same shape, not the actual tank), and after 80 or so miles of ham-fisted riding the fuel gauge shows half a tank remaining; around 150 miles should be within easy reach.

The Ninja and Z125’s chassis are almost identical – same steel tube frame (with obvious Z-family heritage) and steel swingarm, same 37mm unadjustable tele forks, preload-only rear shock, 263mm wavy disc with sliding two-pot caliper, wheels, steering geometry – basically, everything except a few degrees of rake (the Ninja has 0.7° less rake angle, possibly because the forks still a little higher in the yokes – which are different; the Z has risers for a handlebar, and the Ninja has clip-ons and a fairing stay and clocks bracket). Thanks to its extra bodywork the Ninja is slightly heavier than the Z, at 148kg to 146kg, and has slightly less steering lock and ground clearance.

But ground clearance shouldn’t be an issue on either bike. The standard Dunlop TT900 rubber isn’t as bad as the stuff fitted to some other 125s (looking at you, KTM). And, despite some intense hooning on mountain roads, grip is consistent even if the road surface isn’t. But you’d have to have a lot of confidence on a bone-dry day and smooth tarmac to go banging pegs down – even at moderate knee-down angles, the Kawasakis’ budget damping will have the springs chattering in protest.

But in normal use, ride quality from both bikes is good – machines that weigh so little usually are the ones that would benefit from quality suspension the most, and are usually the ones least likely to have it. But both Kawasakis respond to general bumps and road aggro with composure. And their agility is excellent – with so little mass to swap direction, the Z and Ninja slice through traffic like a paper cut.

Of course, some of you might be sitting thinking the 125s’ frame and chassis set-up look familiar – because it is. Like the motor, the frame, forks, wheels, brakes, swingarm are all borrowed from the Z250SL of a few years back. And when we say ‘borrowed’, we mean almost literally, with a few brackets and bits for new fittings. It’s tempting to say this kind of platform engineering can only be a good thing because it reduces costs across the board... but the Z250SL is still on sale, and it costs £3650. The Z125 starts at £4100. 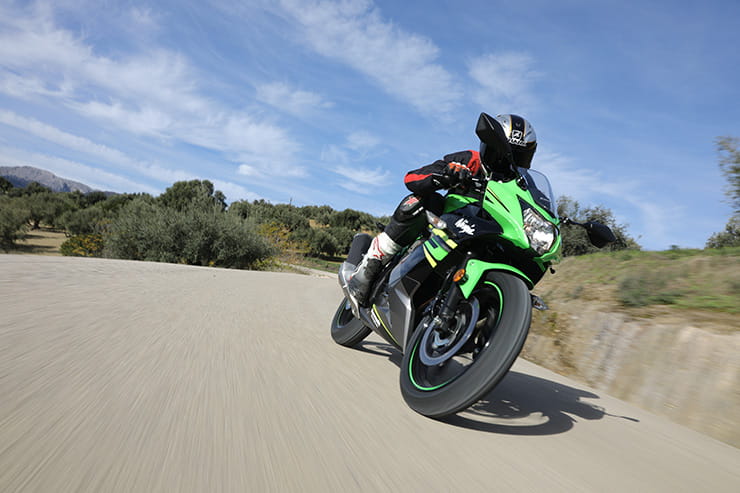 Unlike the Z250SL, the 125s have got ABS – it’s a Bosch system, acting on the 263mm wavy front disc, with sliding two-pot caliper, and the rear 193mm disc with single pot caliper. The performance of the system is nicely balanced with fork damping and front tyre grip to generate the optimum stopping power: a big handful over bumps gets the ABS on-off-on pumping in time with fork chatter, but under most riding conditions braking is perfectly fine. 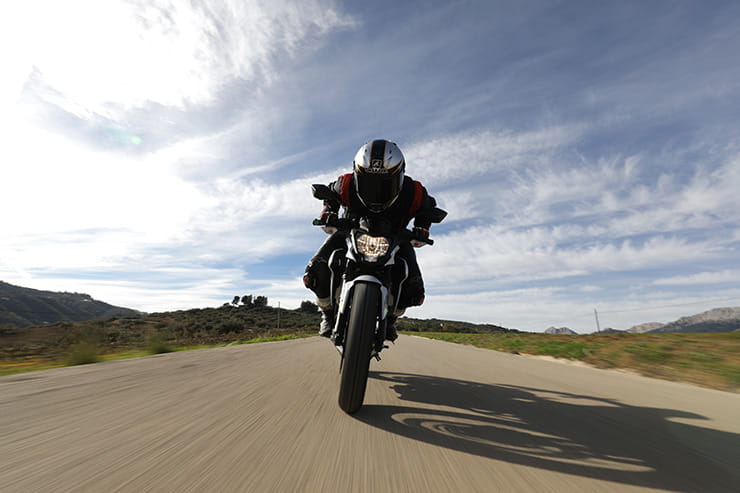 A worry with big fellas on small bikes is looking daft – and seeing Kawasaki say 40% of the reasons given for choosing a 125 is down to looks, the way you feel you appear to the outside world as you skim past on your Ninja or Z125 really matters.

Thankfully, the Ninja and Z125 are roomy enough for a six-foot chunker without feeling contorted. I’ve ridden plenty of bigger bikes with less spacious riding positions. The narrow tank has deep, tall cut-outs and only people with unnaturally long tibs and fibs will find their knees bashing bar ends.

Despite its clip-ons, the Ninja is more of a sports touring riding position and doesn’t feel radical. The Z250s bars are wider and give more steering leverage over the front end – but the Z steers so quickly it hardly needs it anyway.

If you regularly spin your bike round in a confined area, it’s worth knowing the Z250 has a slightly tighter turning circle than the Ninja. It also has a taller seat – 815mm – against the Ninja’s 785mm. The difference is down to seat foam thickness – which means it’s possible to swap them for personal preference.

This is one of the Z125 and Ninja 125’s big problem areas. The dash, like the chassis, is lifted straight across from the Z250SL and, as such, it’s about as appealing as a brick. Dull LCDs, no colour, and information limited to rpm, speed and trips – no fuel consumption, no average speeds and no gear position indictor. And there’s certainly none of the Bluetooth integration you get with KTM’s TFT dash, or Aprilia’s screen.

Neither do you get many other bells or whistles. The new YZF R125 has a slipper clutch. The Aprilia RS125 has an optional quickshifter. The Suzuki GSX-R125 has keyless ignition. The best the Ninja and Z125 can offer is an Arrow end can. 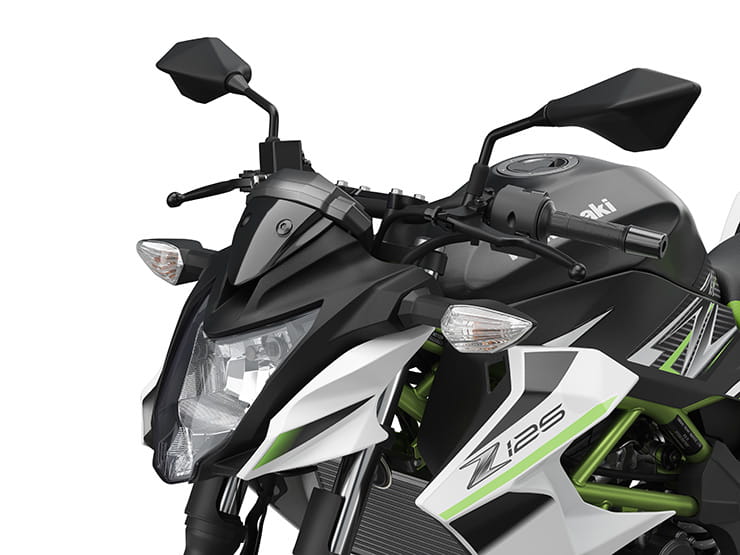 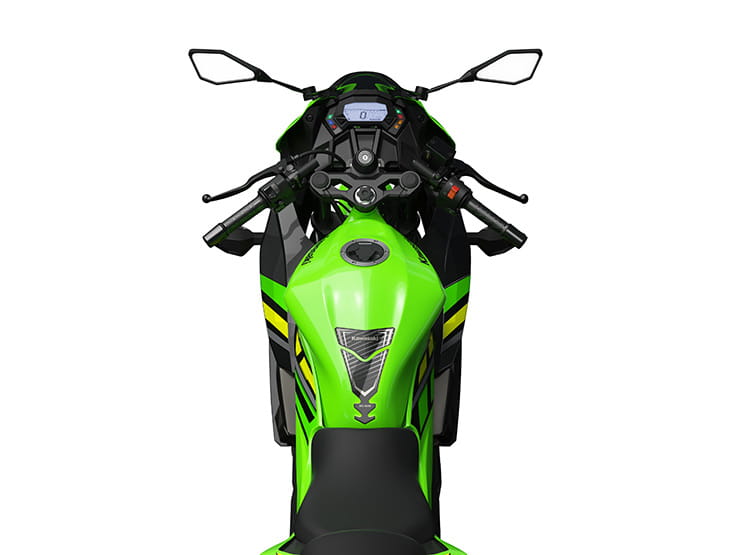 Before we get the Z125 and Ninja 125s in the UK to test back to back with their rivals, in isolation they seem like good, solid, handsome 125s with a big bike feel (if not big bike performance) and cracking good looks. They both handle well, have plenty of suspension and grip, and brakes that work wit feel and power. Performance is revvy and top-endy, and if it might better if the motor made more power at lower rpm. But for now, it’s looking good.

Until, that is, you look a bit deeper and discover the 125s are a direct rip from a previous model – not a problem in itself, but there’s been previous little attempt to enhance or uprate the bikes and they’re still significantly more expensive. And compared to their 125 rivals, the Ninja 125 and Z125 start to look a bit under-spec’d. On the other hand, they’re an absolute blast to ride.

Comfort – proper big-bike feel with room for a six-footer

Looks – both bikes are good looking things; the SE Ninja, in green with a flash of yellow, reminds me of a KR1-S...

Vibes – can be a bit harsh at the top

Value – other have more for less 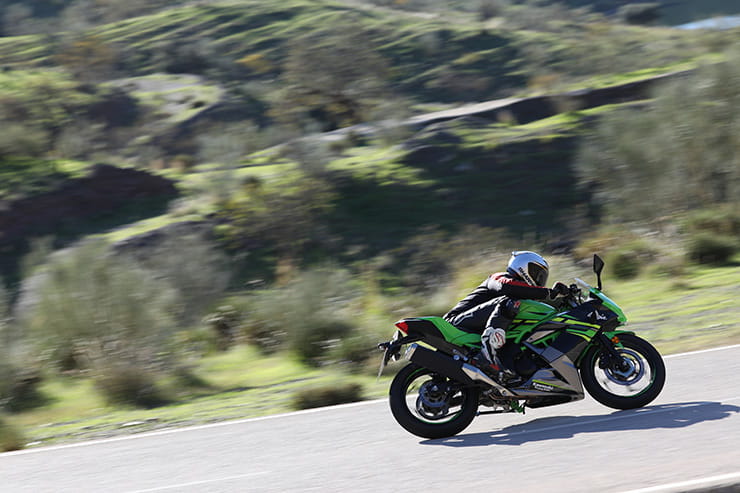 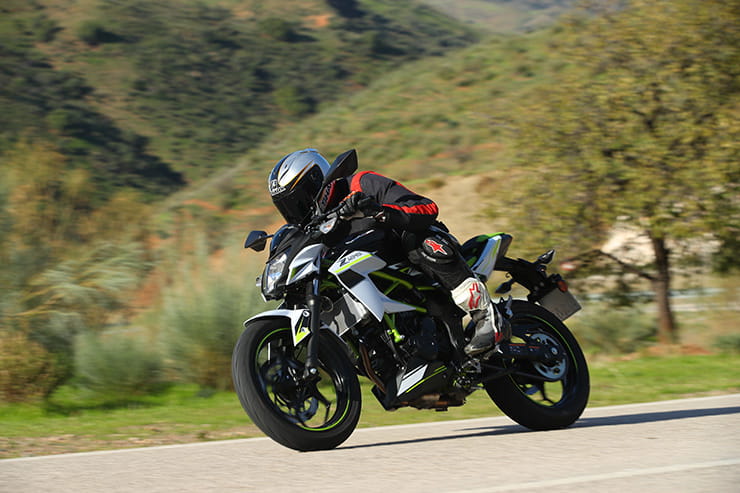