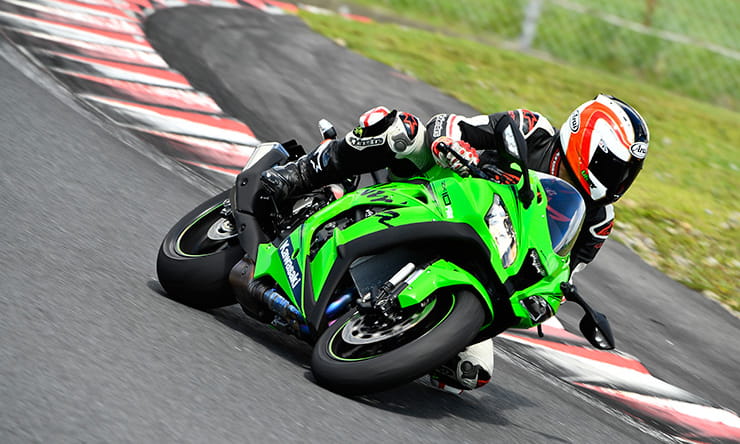 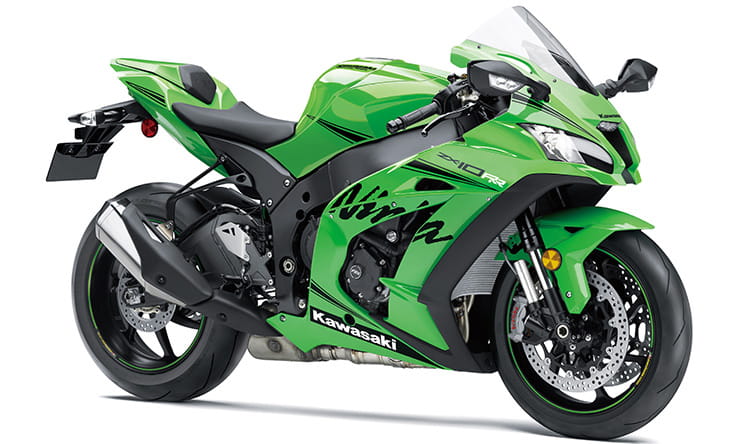 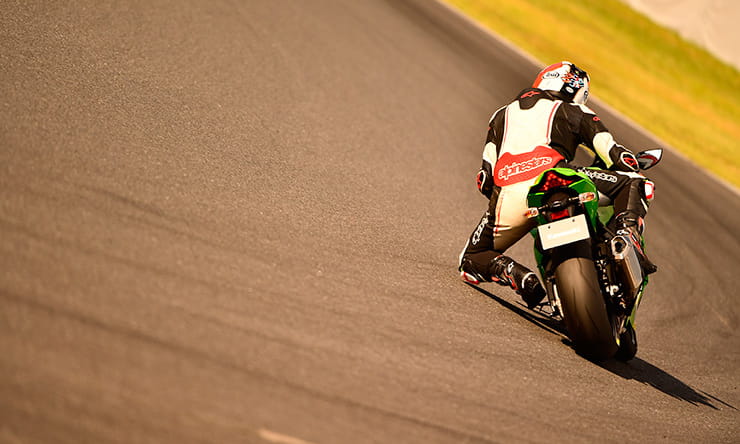 Kawasaki have a problem with the Ninja ZX-10R in WSB. In some ways it’s a good problem – they are too successful! Having won four of the last five WSB championships and at the time of writing with three-time champ Jonathan Rea sitting at the top of this season’s standings with a 92-point advantage and just four rounds remaining.

Due to their domination in recent years, the WSB organisers have slapped rev-limit penalties on them. In retaliation, and to ensure they remain at the top, Kawasaki have upped their homologation-special ZX-10RR’s rev limit through a redesigned head and titanium conrods. The results in world championship racing will be shown next year, but when it comes to trackday or superstock riders, the Ninja has certainly gained some more urgency in its rev range. Not that it was exactly lethargic to start with! 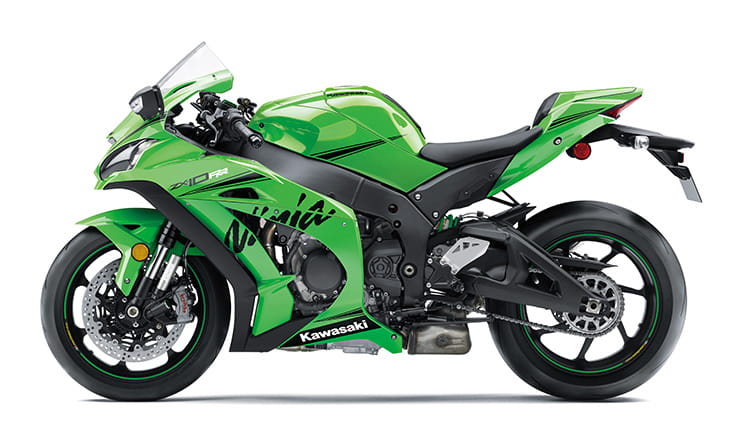 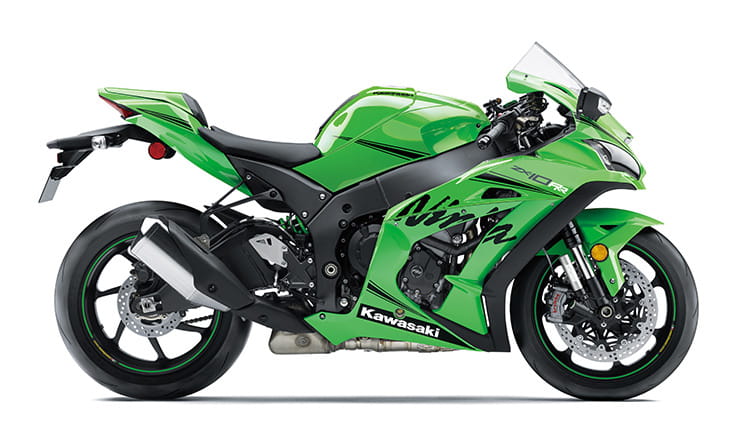 While 408g may not sound like much, you have to remember just how many times this weight is flying up and down within the RR’s cylinders every second. Compared to the standard Ninja, the RR’s lightened internals give it a far faster rate of increase in its revs and everything feels, well lighter and more responsive. But what surprised me the most was how smooth the motor was as in my head ZX-10Rs are aggressive beasts. There is actually decent midrange and while on the road the RR will certainly feel a bit breathless low in its rev range, on track there is strong midrange drive followed by whack of top end thrust once the rev counter turns from orange to red as it passes 8000rpm. It’s not as fast to accelerate as the Panigale V4, which just devours gears faster than you can throw them at it, but it is certainly quicker to pick up its skirt and run than the standard model. Which is exactly what you would expect for a bike with titanium conrods. It’s not revolutionary in terms of its performance, but it is certainly sprightlier.

While the RR has always had an up and down quickshifter as standard, the stock road bike now gains one as well, which is great news for those not wishing to splash the cash on the RR or SE. It’s the same system and on track the RR’s unit performed faultlessly. As an old-school rider I have to make a conscious effort to not touch the clutch when going up and down the gearbox but on the RR it felt natural, especially in a track environment. Entering the braking zone you can just stamp down and not once did I miss a downshift or feel like I had to pause before it engaged. Being a touch on the big-footed side, and because I was clinging on like a monkey to a palm tree in a typhoon as the Ninja accelerated, I did find the gear lever’s position a bit awkward to locate on a few upshifts (the rubber is quite large), but if you are precise with the lever the upshifter is again excellent on track. 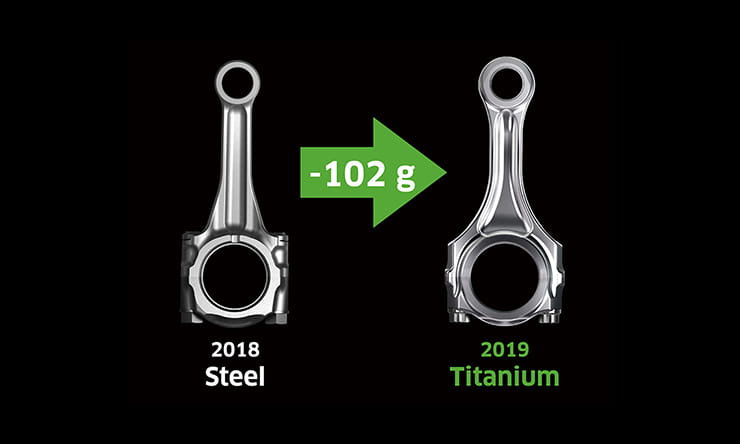 If you are worried about fuel economy you are probably not in the market for a Ninja ZX-10RR. It requires fuel when the fuel warning light comes on and costs as much as it needs to…

There is a reason the Ninja wins so many track tests and its chassis is the one area Jonathan Rea highlighted as its major strength in his WSB racer. On track it is sublime when it comes to changing direction and feels effortless when you are angled over. Even on Autopolis’ start/finish straight were you are high in the rev range in top there was no hint of a weave (the RR also has an Öhlins electronic steering damper like all ZX-10R models) and in the braking zone it was also very planted. Kawasaki set the RR’s suspension up for a 75kg rider, which is a (cough) touch lighter than me and given more time I would have added a bit of preload to the rear as it was squatting when hard on the gas, causing a bit of a wobble from the rear under flat-out acceleration when slightly lent over. Also, under hard braking the rear did sway a little bit, so a touch more damping in the forks would also be helpful to compensate for a recent McDonalds binge… Sadly our limited track time didn’t allow me to tweak the stock settings.

Brembo monoblock calipers are kind of a sportsbike industry standard and they don’t disappoint on the RR, however what I wasn’t expecting was how much feel Kawasaki have introduced into the system. Usually bikes with braided lines feel dead at the lever, but on the RR you get a nice bit of squish over the initial part of lever travel that makes the brakes bite hard but not too fiercely. If you require that little bit more aggression (or you have buggered up the corner) then the final section of the lever’s movement really throws a stick in the front wheel and your balls into the tank. Also, unlike some rival ‘track’ ABS systems, I didn’t find the need to disable the cornering ABS on the ZX-10RR, which was good. While I can’t see racers using it, trackday riders will certainly benefit from it being active in the background. A plug-in aftermarket dongle can be bought from Kawasaki to disable it completely. 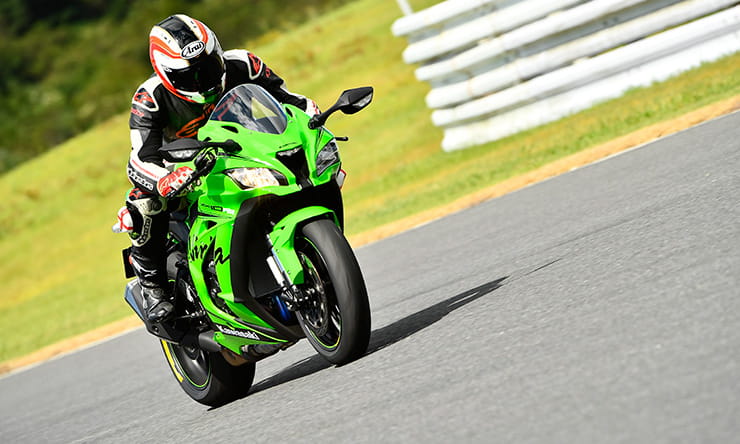 There are no alteration to any of the ZX-10R model’s riding positions for 2019, so it is the same as the previous generation. It’s not the smallest of litre bikes, and certainly isn’t as cramped as the R1, but by the same token it’s no tourer. On track it all makes perfect sense and the cut-outs on the tank are ideally positioned for you to hook a knee into or rest an arm on mid-corner.

You can’t really fault the ZX-10RR when it comes to equipment as it has every electronic gizmo under the sun including launch control, and up and down quickshifter, traction control, power modes and anti-wheelie. Yes, it lacks semi-active suspension and doesn’t either have Öhlins suspension, but this is a homologation race bike and racers don’t want semi-active units and swap the stock suspension anyway. When it comes to superstock regs you have lightweight wheels, a motor built for revs, Brembo brakes and a WSB-winning chassis! Game on! It’s just a shame for road riders that a TFT dash is still very obviously lacking and an inbuilt datalogger would be nice on an RR model.

Finger-followers vs a bucket and shim

Most motors use a ‘bucket and shim’ valve train, which consists of a small metal ‘bucket’ (basically a hollow cap) that sits on top of each valve. This bucket is struck by the camshaft, causing the valve to open as it is pushed downwards. In recent years nearly every sportsbike manufacturers has swapped to ‘finger-followers,’ which are small levers that are struck by the cam and in turn push directly on the top of the valve, doing away with the bucket.  While cheap to mass-produce, the issue with a bucket and shim system is the fact the bucket has to rotate slightly to reduce wear, introducing slop and drag into the system. In addition, the bucket itself is heavy and due to its large surface area, the camshaft lobes themselves can’t be made that precise. As the finger-follower is struck directly by the cam this system is far more accurate and therefore you can use a more aggressive cam profile and a smaller cam, which is good for racing, and the finger-followers are also lighter, which is good for revs and durability. Kawasaki claim their new finger-follower system is 20% lighter than the old valve actuation and has upped the rev limit by 600rpm on the RR. 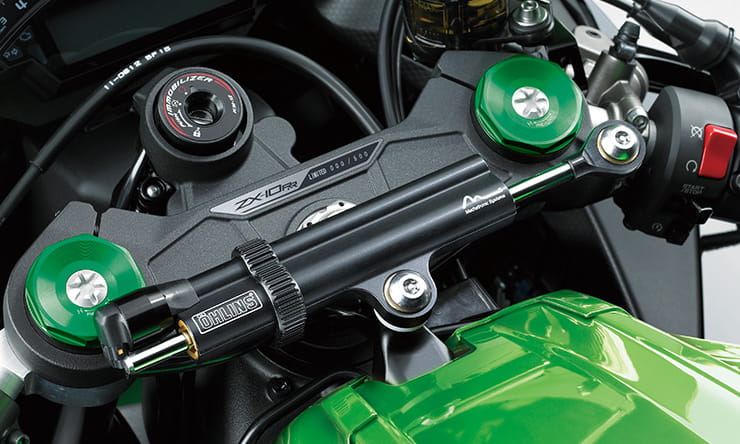 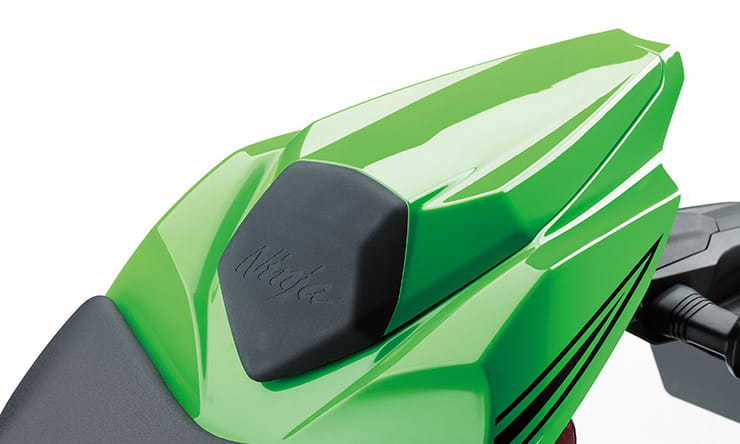 Kawasaki sell around 400 Ninjas in the UK, of which 60% are the stock model, 20% the SE and 20% the RR. And most of the RRs go directly to race teams. It’s a homologation model and as such the fact its dash is a bit crap and the low rpm that is a little lacking is inconsequential. The changes Kawasaki have made to the RR for 2019 will give racers what they want and I wouldn’t bet against it succeeding in superstock and WSB. If you are a hardcore trackday nut the RR’s engine will certainly feel more responsive than the stock bike’s unit, but justifying the extra cost will be tricky unless you are fighting for a championship. So, in terms of keeping the Ninja on the pace the RR is certainly a winner. But for road riders I’d be tempted to go for the base model and spend the over £6000 difference on trackdays!

Three things I loved about the Kawasaki Ninja ZX-10RR 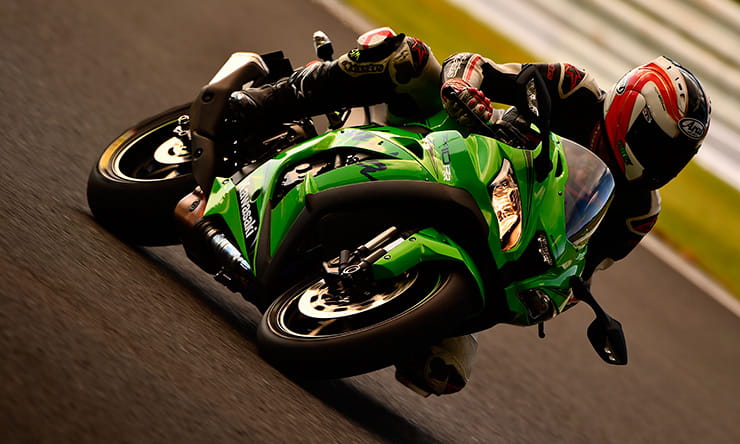