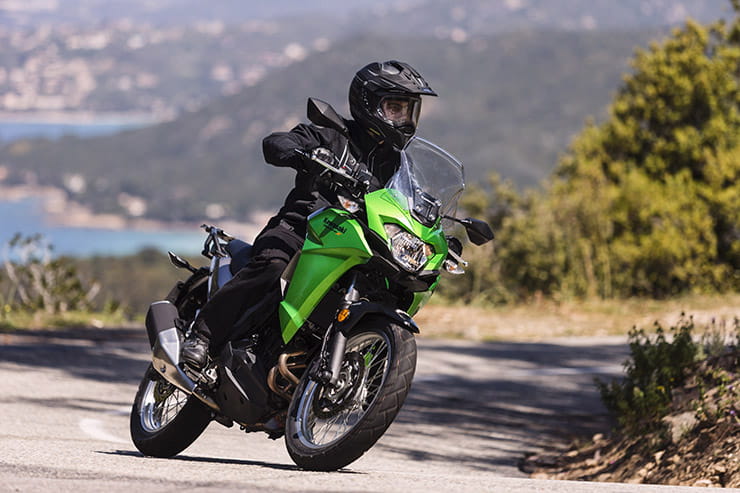 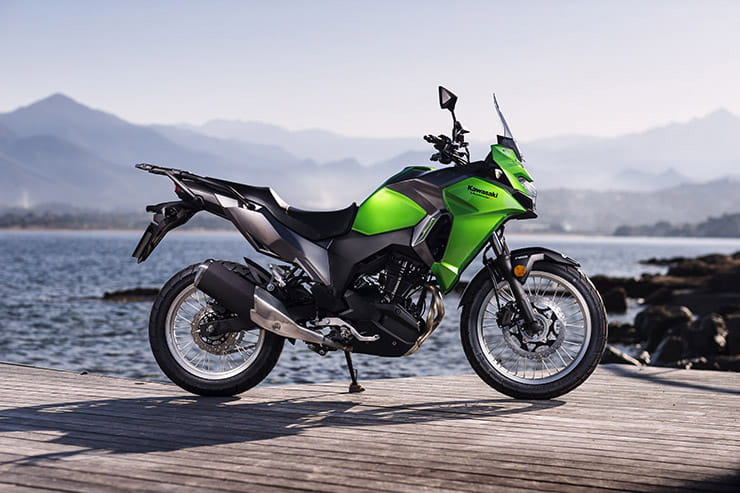 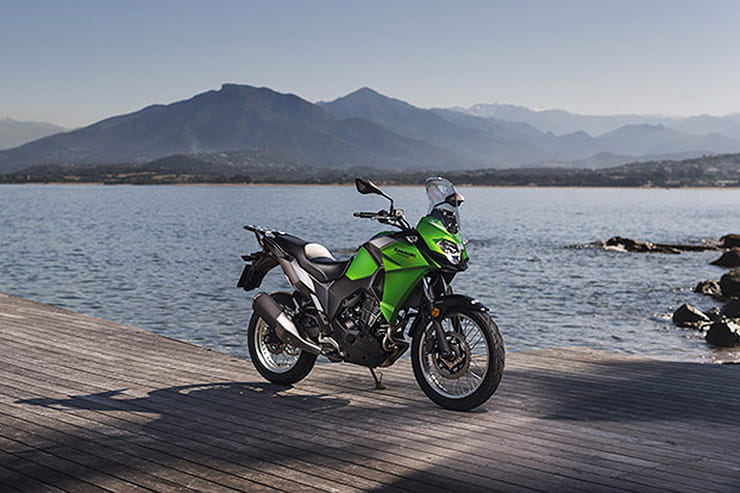 To many riders, mini adventure bikes make a lot of sense. A2-legal and boasting upright and comfortable riding positions, bikes such as the Suzuki V-Strom 250, KTM 390 Adventure and Royal Enfield Himalayan are tempting prospects – even more so when you add in their frugal economy figures and ability to take to the green lanes for a bit of weekend amusement. In 2017 Kawasaki got in on the mini adventuring act with the Versys-X 300, a bike that unlike the rest of the Versys family, actually came with some off-road pretentions through a 19-inch front wheel rather than 17-inch wheels like the 650 and 1000. Powered by the Ninja 300’s excellent parallel twin engine, the Versys-X should have been a good seller for the firm but oddly it wasn’t and where the likes of the Enfield and KTM have gone on to great things, like the V-Strom 250 the Versys-X had a short lifespan in the UK of just two years. Does that mean it is a bike to avoid? Not necessarily and if you are after a solid plodder that can commute or explore the occasional muddy green lane, the Versys-X isn’t a bad option and is quite well priced in the used market.

The A2-legal parallel twin is taken from the Ninja 300 and is a good engine that makes a pleasingly wide spread of torque that unlike its single-cylinder rivals doesn’t demand to be revved everywhere. It’s certainly not the fastest engine in the A2-legal category but it is a good performer that is fairly happy to operate at road legal speeds. However there is a bit of an issue that Kawasaki created themselves with the Versys-X that hampers its performance somewhat on the road...

Due to the fact that Kawasaki wanted to give the Versus-X some off-road potential, they took  the decision to arm it with a 46-tooth rear sprocket, up three teeth on the Ninja 300’s sprocket yet with the same internal ratios. While this certainly makes it pull stronger at low revs, which is handy in the mud, on the road it makes it really rev-happy and when you are doing 60mph the engine feels and sounds like it is working far harder than it needs to be. A change of rear sprocket (or front) helps cure this and is a great idea if you only ride on the road as it would also boost the economy figures even further, but in standard trim it is annoying as the Ninja’s parallel twin motor isn’t really a rev-monster. Onto more positive things and the slip & assist clutch’s action is feather light, the fuelling decent and economy figures impressively high. So what’s not to like? In terms of the motor, not a lot. The Ninja 300’s engine has a very solid reputation for reliability as long as it is serviced regularly (every 3800 miles with valve clearances at 7600 miles) it can take a heck of a lot of abuse and is cheap to get serviced with even the big service only costing about £300 and the minor half this. And if you want to do the oil change minor service at home, parts are less than £40. As you would expect on a budget bike the fasteners and finish can be a little poor in areas but the exhaust is stainless steel, which is good news, and the paint on the engine and exhaust seems quite well applied and fairly resistant to flaking. 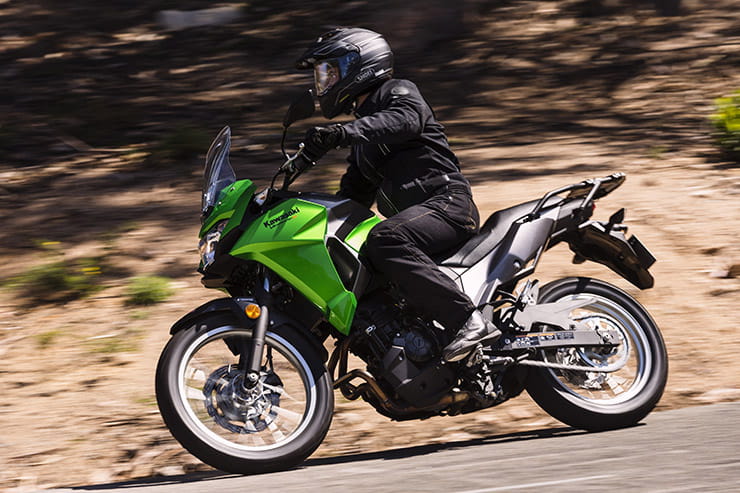 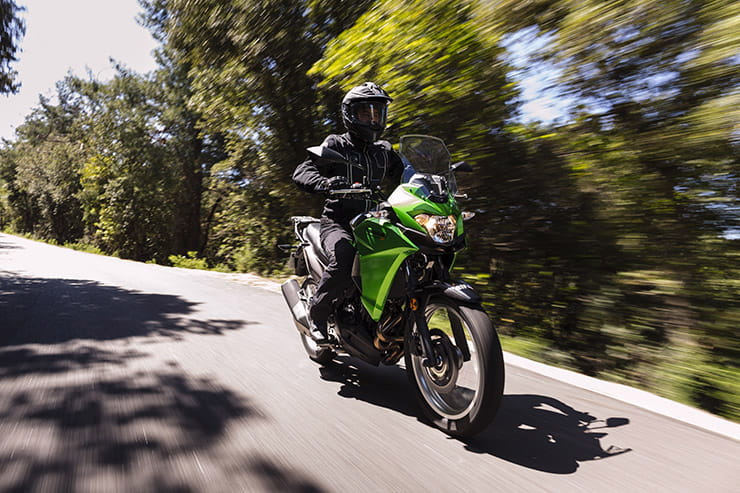 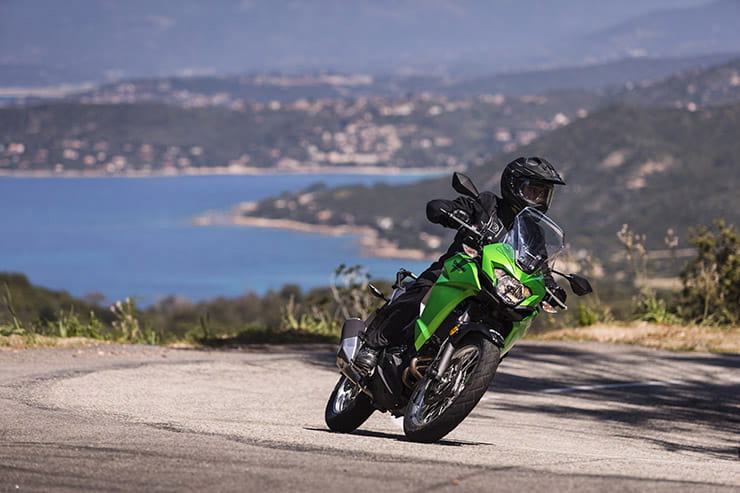 Kawasaki claimed the Versys-X could do 66mph and record over 200 miles from its 17-litre tank, which is really impressive and a claim backed up by owners with a few even getting it up to 70mpg. Put the taller gearing on and you could even see 80mpg, which certainly isn’t to be sniffed at. Consumable parts are cheap and plentiful and insurance is also next to nothing, making the Versys-X a very cheap bike to run if you are on a tight budget.

Due to Kawasaki wanting to give the Versys-X some light off-road ability, they have armed it with soft suspension and on the road this does tend to work against it. A touch on the bouncy side and wallowy in bends, the suspension is quite budget but if you are in no rush it does a great job of soaking up any uneven surfaces – be that on or off-road. A major positive is the fact that the X has a huge 40-degrees of turn either way on the bars, meaning you can easily U-turn in a single track road or a narrow street, which is great. The seat height of 845mm may sound intimidating however the combination of the soft suspension and the parallel twin’s narrow waist means it feels far, far lower so isn’t a problem. When buying used, always give the bike a good inspection for crash damage and also check the spokes for any rust or signs the spokes are loose or damaged but again, like the motor it is a very solid platform and faults other than those caused by the previous owner are few and far between. If parts are worn out such as the chain and sprockets, fork seals etc they are cheap to replace, so don’t be too concerned, focus instead on the bigger picture such as damage due to a drop. The shock is worth checking properly as due to the Versys’s relative rarity in the UK used spare parts are hard to locate. The good news, however, is that the X sold well in America and as long as you are prepared to stump up a bit in postage, used parts are a lot easier to locate over the pond.

The Versys has a pretty common two-piston sliding caliper front brake and a rebuild kit is only £25, so you don’t need to be too worried if it is a bit corroded. The chances of a disc wearing thin are minimal and the rear caliper is also cheap to rebuild. Not the most powerful of braking set ups, the Versys’s stoppers are adequate but in all honestly, with a skinny front tyre and soft forks that is about all you need. ABS was an option and most UK bikes come with it. Annoyingly the ABS can’t be disabled for off-road use without removing a fuse. 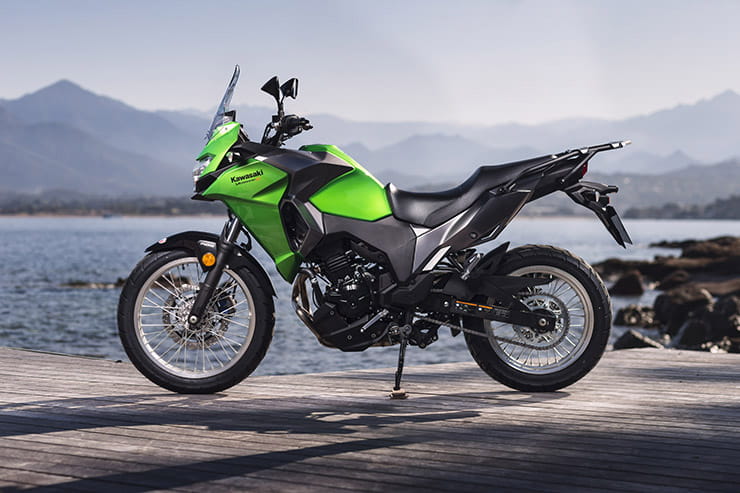 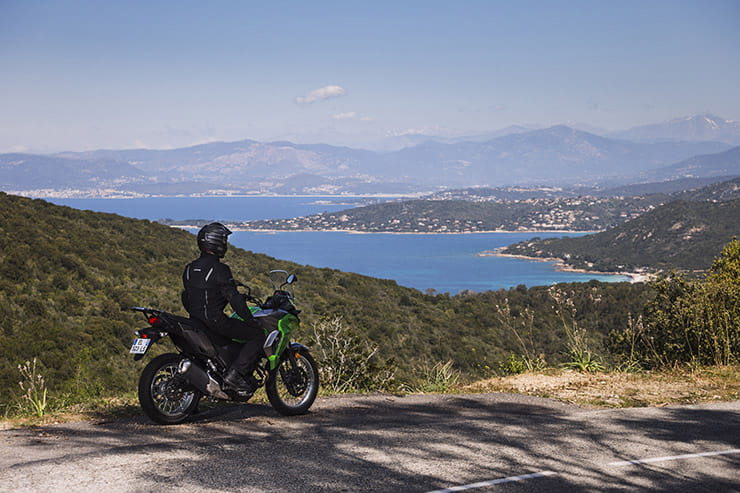 Kawasaki did their best to make the Versys-X a fairly practical bike and as well as the large 17-litre tank they gave it a big screen, wide fairing, roomy riding position and a decent sized seat with a rear luggage rack as standard. However it isn’t all good news because the seat isn’t very comfortable and the motor’s vibrations make it a bit irritating to ride big distances on. A better seat and a change to the gearing makes it far more accomplished at mile-munching but you are still on a fairly small bike so it is limited in its use as a tourer.

Aside from the option of ABS (which can’t be disengaged) the Versys-X has no rider assists unless you count the gear indicator, fuel gauge and ‘eco’ warning light on the dash. In terms of accessories, however, Kawasaki really did push the boat out. The Versys-X was sold in Adventure spec (which added panniers, a centre stand, hand guards, engine guards and a tank pad) or Urban (which added a top case, hand guards, centre stand and tank pad) but most UK bikes are standard spec. All of the parts were available separately alongside additions such as fog lights, brush guards, top box and taller screen. As the Versys-X is popular in other regions, you can still buy a good lot of accessories and taller screens, heated grips, aftermarket shocks, lower seats, comfort seats etc etc are very easy to obtain.

There is no reason (vibrations due to gearing aside...) why the Versys-X shouldn’t have sold well in the UK as it is a decent mini adventure bike that delivers on its promise and has an excellent supply of accessories to make it even more practical. If you want an A2-legal bike that can also be ridden (at a gentle pace) on green lanes, it is a really good option.

Three things we love about the Versys 300… 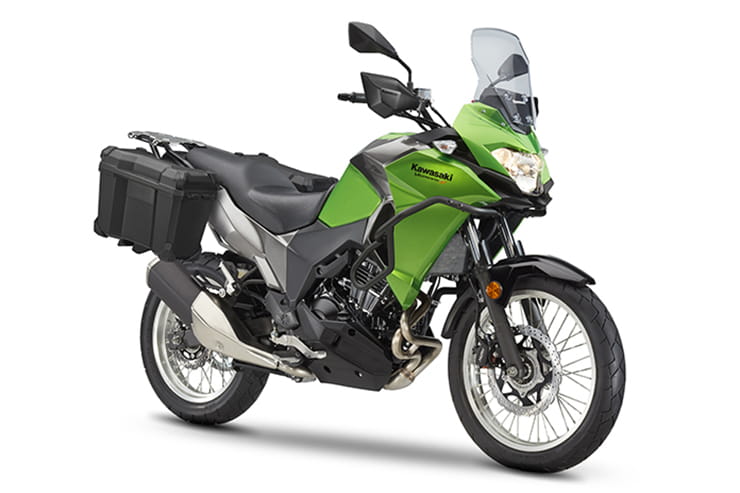 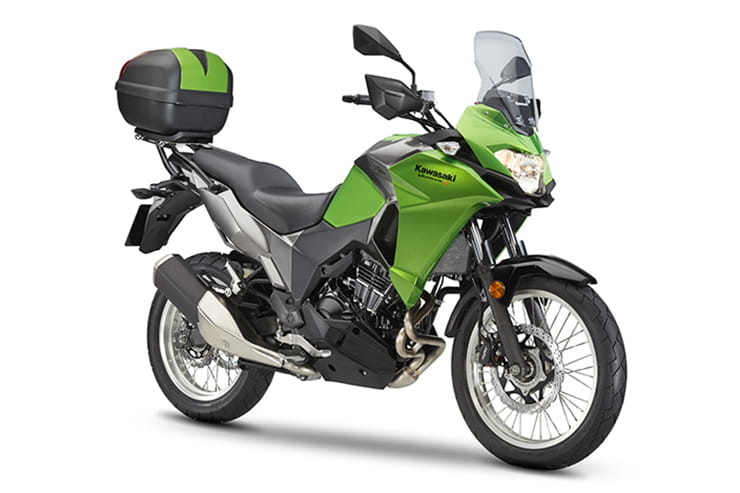 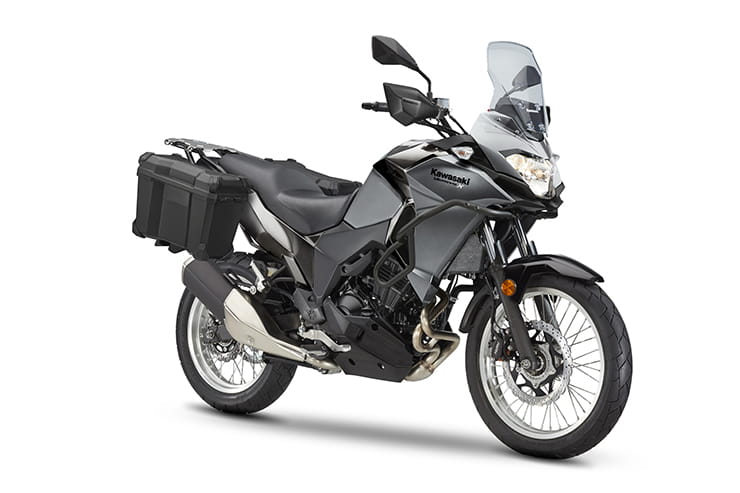 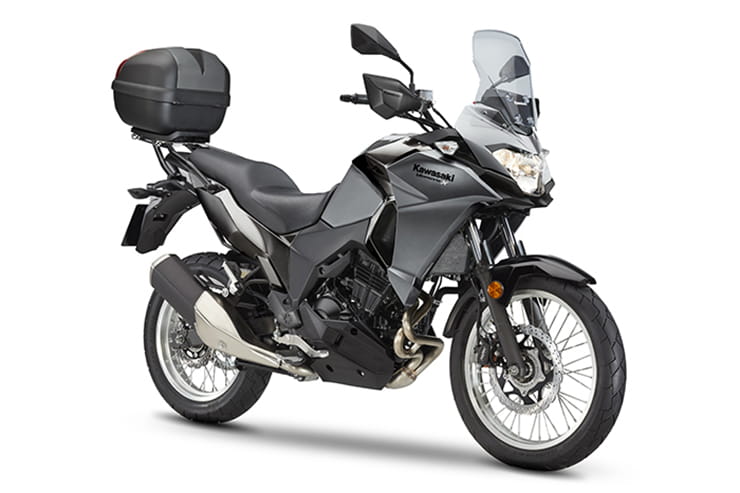