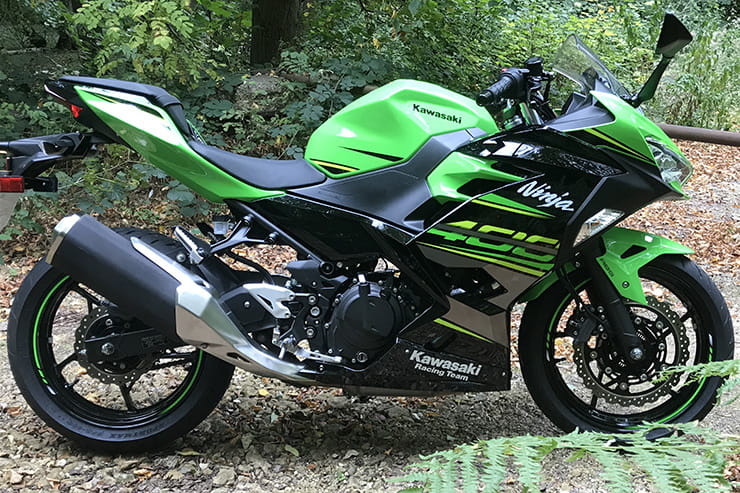 Kawasaki’s popular mini-Ninja gets an all new engine with thirty per cent more capacity, fifteen per cent more power and fifty per cent more torque. It also gets uprated suspension, sharper steering and styling to mimic the ZX-10R. What was already a very good bike has just become a proper middleweight sports bike contender. And it still meets the requirements for an A2 licence holder.

That’s the official BikeSocial summary. Unofficially can I just say that this bike is flipping brilliant in a way that is really difficult to describe in words. So much more than the sum of its parts, so much more than the numbers on the spec sheet suggest, this is one of those bikes that has a genuine personality; mischievous, giggly, egging-on even the most grown-up and sensible of riders. Big enough to be a proper bike, light enough to be ridden with the absolute abandon of invincible youth. We defy anyone to ride a Ninja 400 and not come back grinning. 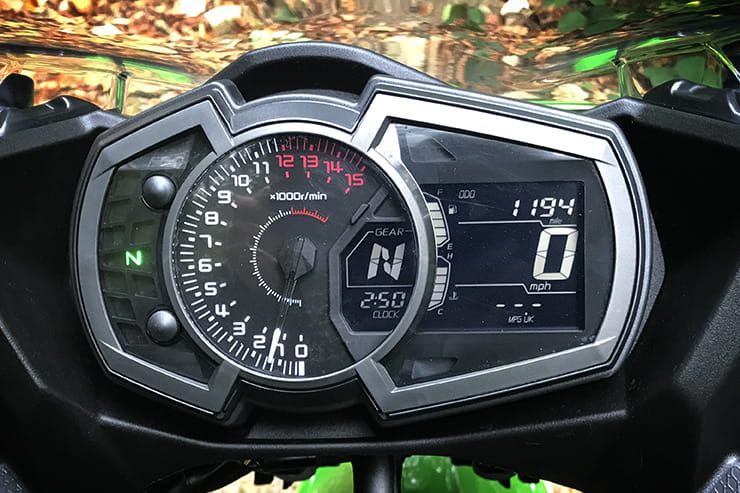 In these KRT racing colours the Ninja 400 costs £5349. That’s £50 more than Yamaha’s YZF-R3, £150 more than a KTM RC390 but £300 less than Honda’s CBR500R. Such small differences are easily countered by a bit of haggling or a favourable finance deal, meaning your choice can be purely about the bike or proximity of a dealer you trust.

Kawasaki are currently running PCP and finance deals on the Ninja 400. A three-year finance deal based on £500 deposit works out at £134 per month. On PCP, with the same £500 deposit, you’ll pay £87 per month for three years with a final payment of £2389. Current demand for used small Ninjas suggests your bike will be worth more than that after three years meaning you’ll have some equity left to pay your next deposit.

Increasing capacity by thirty per cent is rarely a bad thing, especially in the A2 licence category and even more so in the rev-happy world of sports bikes. Adding 100cc has boosted the Ninja’s torque output from 19.9 lb-ft to 28 lb-ft, giving it some much-needed additional shove through the whole rev range and making it feel much more like a serious sports bike than the old 300cc motor. Horsepower is increased too, from 39 to 44bhp in the new bike, which is impressive in a bike weighing just 168kg, fully-fuelled and ready to go. 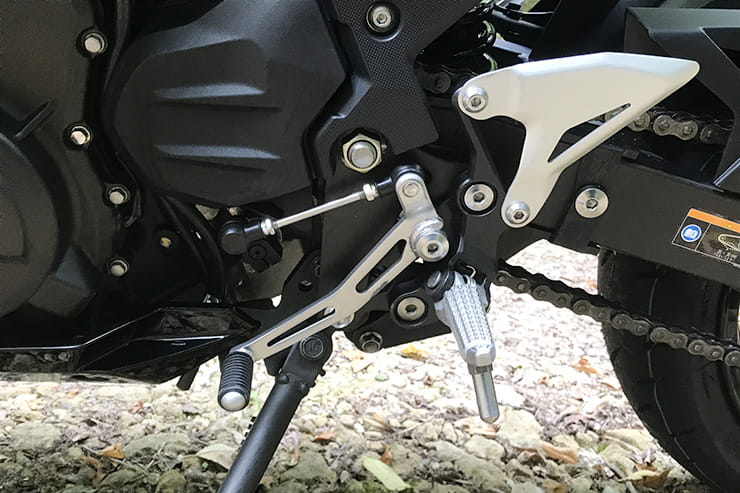 This little fella works hardest of all

The previous Ninja 300 was based on a long-running Kawasaki motor dating back to the 1990s. This one is all new and it shows the moment you first twist the throttle. It feels like a modern engine, revving quickly and making power smoothly across a very wide rev range. This is state-of-the-art fuel injection and everything Kawasaki knows about power delivery in one really enjoyable unit. Thirty years ago you could buy a four-cylinder Kawasaki ZXR400 that made thirty per cent more horsepower than this motor, so it seems at first like progress has gone backwards. But the reality is that the old ZXR engine was hard work, very peaky and difficult to ride well.

This one is the complete opposite. It makes plenty of torque and picks up revs so fast that you feel really confident razzing past lines of dawdling cars, even on a national limit A-road.

When the traffic clears the new Ninja motor encourages middle-aged road testers to behave like teenagers; asking for everything all the time and always getting everything you asked for in return. It’s an engine that gets under your skin by taking all the abuse you throw at it and always somehow delivering enough acceleration to make the overtake, find drive out of a corner or just make that teeny exhaust howl

Where other small sports bikes make you choose between top-end power or asthmatic midrange, the Ninja just gets on with it. Kawasaki has tuned the motor perfectly and then chosen exactly the right gearing for real-world sporty road riders. An indicated 100mph comes up at 11,000rpm in fifth (out of six) gear, There’s plenty of acceleration in any gear but sixth feels like an overdrive, for relaxed cruising; 70mph on the motorway is around 7000rpm in top.

The gearbox is good; not quite as slick as it could be and needing a deliberate poke to select a gear. That’s probably a good thing, given that you’re usually doing 10,500rpm when you change gear so missing one doesn’t leave a lot of room for error. 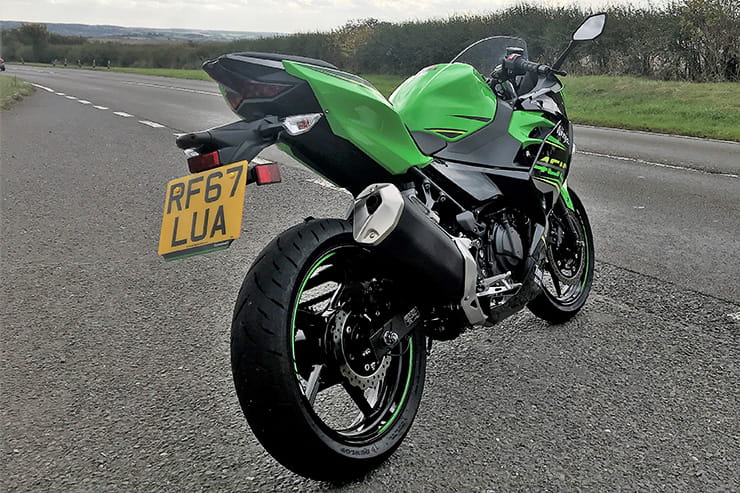 There’s a price for the sort of behaviour this engine encourages. My first afternoon on the bike averaged just 48mpg in 120 miles. That’d be good if this were a four-cylinder 600cc sports bike, but I was expecting much better from the Ninja because, although it feels like you are going really, really fast, a large part of the charm is that actual speeds are relatively sane. At the same speeds for example Yamaha’s MT-07 will easily do another 5mpg.

Riding more sensibly pushes the Ninja’s economy up into the mid-50s and cruising at 75mph on the motorway returned an impressive 58mpg.

Bikes don’t steer this well by accident and Kawasakis in particular don’t often turn this naturally. Someone, somewhere in Kawasaki R&D has clearly worked how to make a road bike steer and we should hope that they get rapid promotion to the ‘big-chair’ in the handling office.

The Ninja’s riding position helps here. Handlebars are above the top yoke, but not too high, while footrests are low and slightly rearset, but in just the right place for confident roadbike bend swinging. Keeping the weight down to just 168kg with a full tank of fuel helps too – light bikes always handle better.

The tyres are narrow by modern standards, but let’s not forget that when the original 120bhp Suzuki GSX-R1100 appeared with a 150-section rear tyre (like the Ninja 400’s), we all gasped at how enormously fat it was. Narrow rubber helps the Ninja steer quickly. Confidence in corners is also helped by basic, but effective suspension that gives a reasonably comfy ride over bumps but doesn’t bounce or wallow as you apply and release the brakes and also keeps the bike controlled in corners 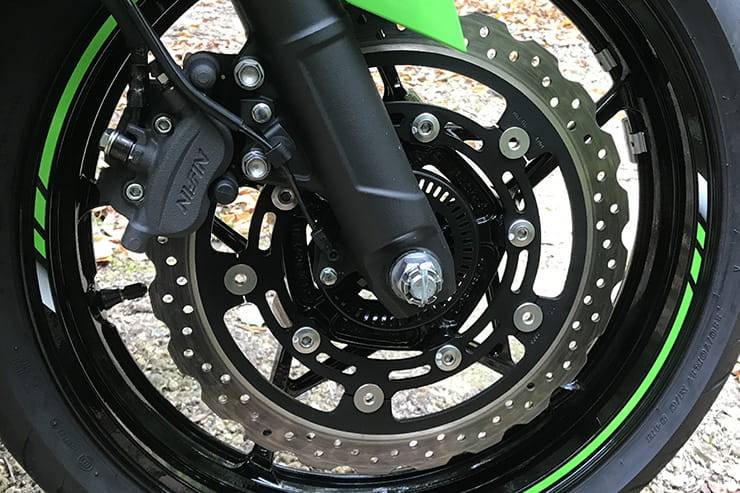 One more of these wouldn’t go amiss

On our perfectly prepared Kawasaki test bike, the single front disc and two-piston front caliper worked perfectly despite the idiotic behaviour being thrust upon it. The rear brake adds stability and finesse through roundabouts or filtering in traffic and there’s a simple ABS system fitted should you get too excited.

The Ninja’s capabilities are on the verge of needing a second front disc, especially as the braking performance drops between services. That would have made it more expensive and heavier though and made increased demands on the suspension set-up.

Surprisingly roomy for a small-capacity sports bike with plenty of space for this six-foot rider to stretch out on longer journeys. The relationship and distance between handlebars, footrests and fuel tank has been well considered, giving the rider both comfort and control in corners. The seat is comfortable for 100 miles. Pillion accommodation is better than some more extreme sports bikes but still very much more ‘Can I blag a lift home please?’ than a weekend away in Scotland.

The only downside is some vibration through the bars on long motorway journeys, leaving numb fingers for a few minutes when you stop. 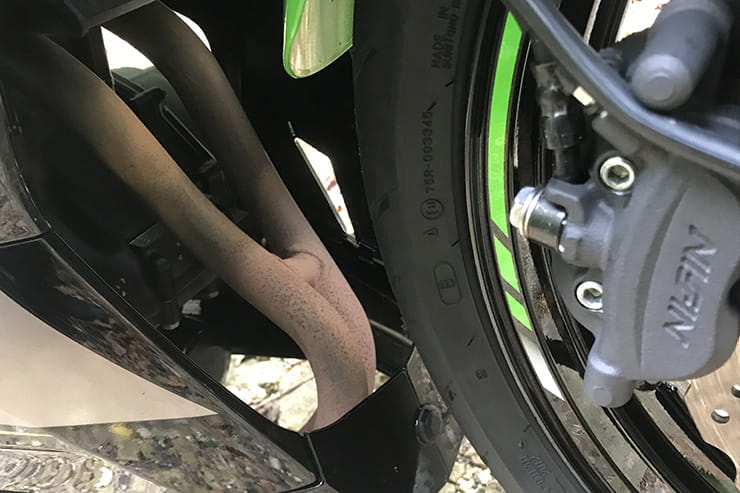 Build quality is mostly (but not all) good

Kawasaki clearly spent the money on getting the basic bike right, so, if you’re the kind of person who needs traction control, Bluetooth connectivity and cheesy marketing messages on the dash when you turn the key, you might need to look elsewhere. The Ninja has ABS, a clock, fuel gauge (and range-remaining function), gear indicator and illuminated symbol telling you you’re riding economically, but apart from that…nothing. That’s a good thing by the way. The basic bike is so right that any baubles and gizmos are unnecessary. 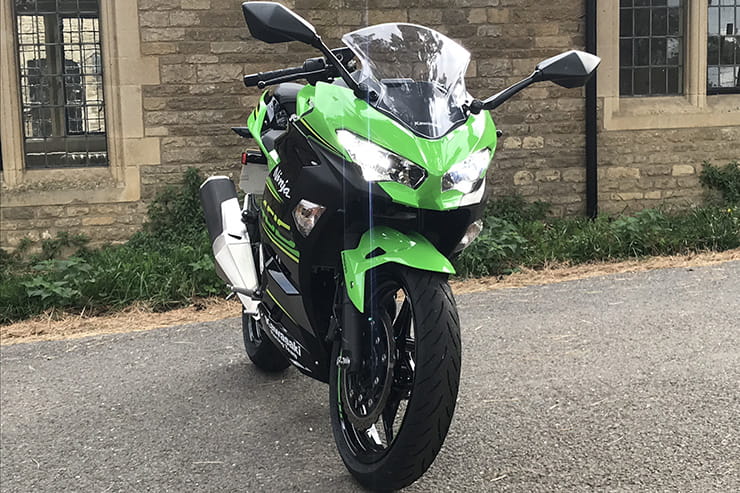 Any resemblance to the ZX-10R is entirely intentional

Kawasaki’s mini-Ninja goes as good as it looks. And it looks bloody marvellous. Some bikes just grab hold of your emotions and keep tickling till you give in and this is a machine that is so much more than the sum of its parts that it’s hard to know where to start.

The new engine has transformed the Ninja from ageing also-ran to absolute contender in a class that gets better every year. There aren’t many other A2 motors that feel this confident and enjoyable to use.

The chassis has the right balance of performance, comfort and confidence that’ll have an A2 graduate getting quicker and more assured with every ride. Seriously, a couple of summers spent honing your skills on one of these will see you emerge a much better rider than on many other A2 bikes, or many other bigger ones for that matter.

Three things I loved about the Kawasaki Ninja 400…

• It’s a small bike that any rider will enjoy

• Brakes are ok, but no more