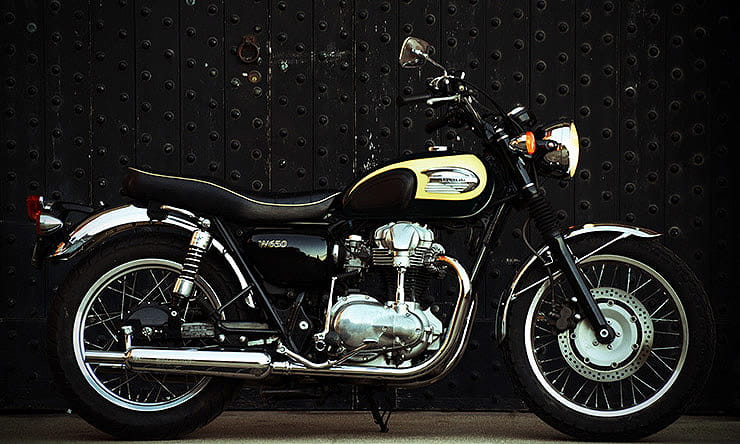 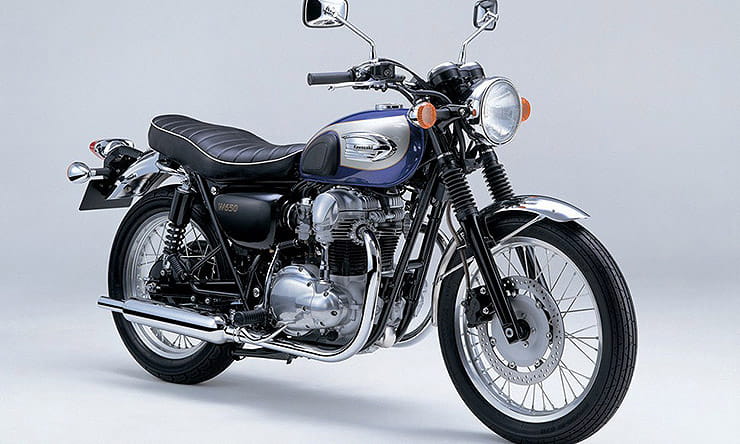 The W650 was not only the first of a new breed of modern, but 1960s retro styled, roadster twins (it actually came out the year before Triumph’s far more familiar and common Bonneville) – it’s also one of the best. With charming, easy manners and fabulously authentic detailing including retro metal switchgear, the little Kawasaki was not only meant to mimic British bikes of the ’60s but it was an acknowledgement of the Meguro motorcycle company Kawasaki took on in its early days and reproduced as a W1 in 1966. The only problem was that it was just a touch too retro for some, with just 49bhp was slightly underpowered, especially compared to John Bloor’s 790cc Bonneville (which had 62bhp) and as a result sales weren’t large, prompting it being deleted in 2006. On the upside, the W re-appeared in larger, 800 form, first in 2011 then in further updated form in 2019 while those original 650s have aged well, have proved durable and reliable and are today in demand both as a usable ‘classic’ and as a basis for a customised ‘scrambler’ or café racer.

The W650 was priced £5145 when launched but despite seeming fairly reasonable it wasn’t a sales success – primarily due to it being a little before it’s time as a retro roadster before the whole class took off; having slightly underwhelming performance; having arguably the ‘wrong’ name on its tank (although the Kawasaki badging was subtle) and being overshadowed by Triumph’s faster, British-built and better named Bonneville in 2001.  For a while, therefore, used examples, although relatively rare, were undervalued. Not any more. With the growth of the retro and customizing scene the W650 has grown in demand. Most are well looked after and demand prices in excess of £4000 even for 20-year-old examples. While even rougher, higher mileage examples (which are rare) will command approaching £3000. 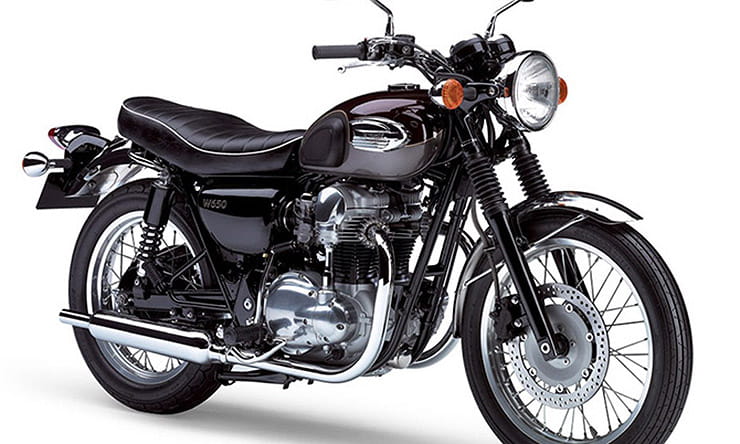 With just 49bhp and 41lb-ft of torque the W650 is not a rampaging beast by any stretch of the imagination, something compromised further by its surprisingly heavy weight, and in fact was soon shown up by the 62bhp of the 2001 Triumph Bonneville. Think more of its engine as a straightforward piece of propulsion that moves across terra firma at a sedate enough pace to see the world in all its glory. Ok, so a startled blackbird could pull out yards on a W650 from a standing start. But you wouldn’t buy a carburetted W650 for anything else but to enjoy motorcycling in its purest form. On the other hand, it’s all pleasant and characterful enough, is similar, in performance terms to Royal Enfield’s new 650 Continental and Interceptor (not to mention Guzzi’s V7) and is arguably sufficient for its intended role – that of pottering around country lanes on a sunny summer’s Sunday afternoon.

The W650’s parallel twin engine features historical bevel gear driven overhead camshaft with the addition of a modern balance shaft to smooth the vibes to a level that is acceptable and which also adds to the W650’s character. It looks brilliantly authentic (far more so than Hinckley’s latest liquid-cooled Bonnevilles, for example), is beautifully put-together, looks great (hence its appeal to custom builders), understressed and is ruggedly reliable as a result. The gearbox is a conventional, modern five-speeder (one down, four up with the lever on the left, not on the right as with a genuine ’60s machine). The twin, ‘peashooter’ exhausts, meanwhile, complete the retro look but are fairly restrictive and largely responsible for the W650’s meagre performance and also vulnerable to corrosion if ridden through winter and not looked after – although most W650s certainly are. 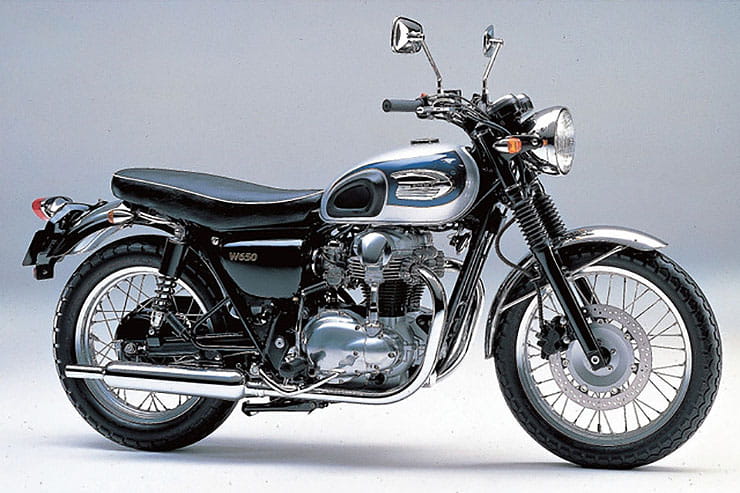 The softly tuned, understressed, low-revving twin is usefully more economical than its 650cc capacity suggests – what’s more most are gently ridden rather than thrashed, so you can expect decent fuel consumption of around 50+ mpg with the potential for even more. Of course, if it is ridden hard, you can expect that figure to drop.

Take the W650 for what it is – old school style with modern running gear – and you’ll never complain about it. Try to tip the W650 into a world of speed and hectic riding and the limitations of weak front disc brake, soft suspension and low foot pegs come at you quicker than it takes the sweeping speedometer needle to hit the 70mph mark. High bars and a narrow, 19-inch front wire wheel combine for light, but twitchy steering when pushed; the old fashioned suspension front and rear, which comprises relatively spindly, non-adjustable, conventional telescopics (complete with rubber fork gaiters, natch) and five-way preload-only adjustable twin shocks at the rear, can be induced into wallows and weaves relatively easily and the bike’s all up hefty weight yet fairly spindly twin loop frame isn’t exactly cutting edge either – but then, that’s not what it was designed for. Improvements in 2001 included revised steering geometry and front suspension changes to improve the handling, but it’s not a massive difference. 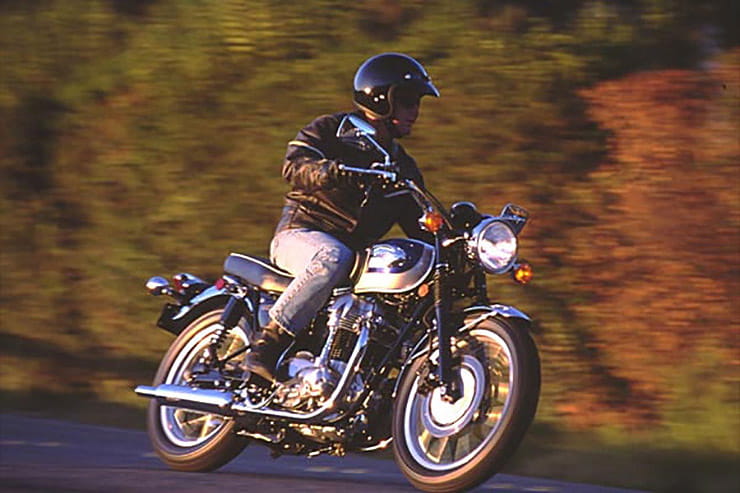 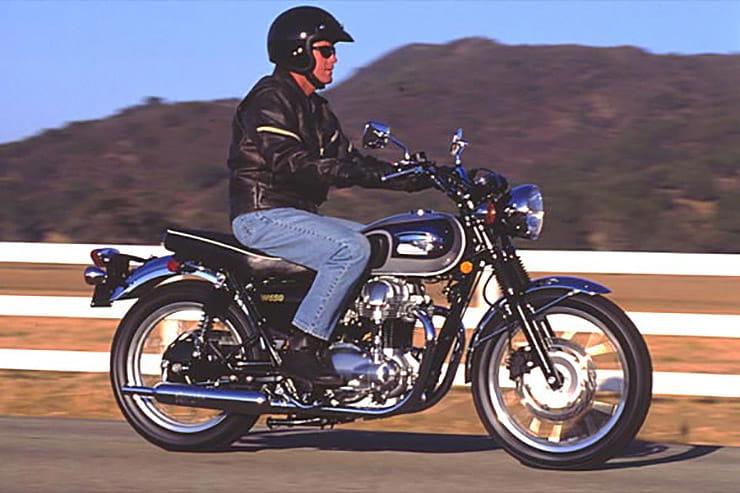 Again, as they’re retro-inspired, the W650’s brakes are nothing special, comprising a single 300 mm disc up front grasped by a fairly basic twin piston caliper while, in a novel move for a modern bike, and a drum brake hauls up the rear. Both are adequate at best, although, again, considering the W650’s intended use and likely riding style, it’s no great loss. The rear drum, meanwhile, although looking authentically retro, was later swapped for a disc on the W800, partly to accept ABS.

One of your first impressions when climbing on board a W650 is how small it feels – and for easy-going, leisurely riding that’s a good thing. The bench seat is just 790mm high; the bike is slim and the relatively high bars give an upright riding position that is almost perfectly comfortable for its intended us on short Sunday rides. Cover any distance, however, and that relatively thin seat starts to create aches and pines while that fully-exposed riding position with zero weather protection makes sustained cruising at anything over 70mph something of a chore. Pillion room, though better than many, is limited, too. Again, it’s fine on short rides but any kind of touring with luggage is probably best avoided.

Triumph, with its latest generation Bonnevilles, some complete with switchable modes, ABS and more, may suggest otherwise but electronic rider aids such as traction control are something of an anathema to retro bikes – as the pioneering W650 proves. There’s no ABS, no electronics and not even fuel injection and any purist will probably say it’s all the better, more characterful and authentic because of it. On the other hand, there’s plenty of cosmetic equipment and accessories available. In standard trim the W650 was well-equipped, coming factory fresh with retro features such as rubber fork gaiters and tank knee pads, not to mention two-tone paint and lashings of chrome and plenty more are available both from Kawasaki and the aftermarket for those that fancy personalising their bike. 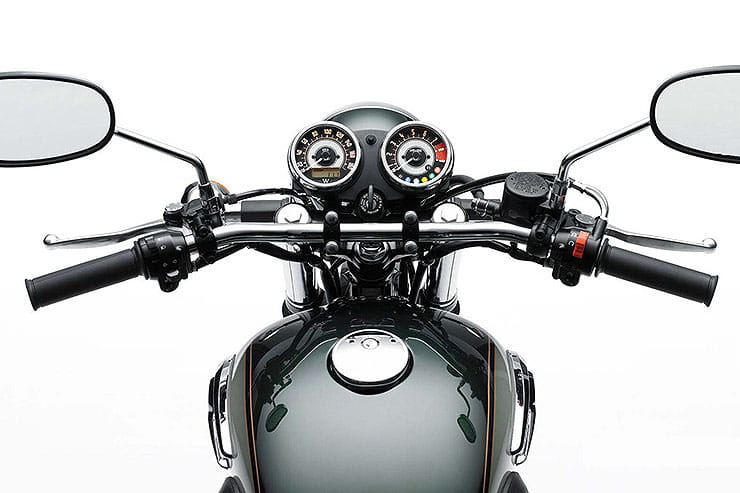 The W650 was not just arguably the first of the modern ‘retro roadster’ breed, a class now dominated by Triumph’s Bonneville family – it remains one of the best. Although its performance is questionable and the limits of its handling can be easily found, that’s missing the point, ignores the type of riding it’s been built for and distracts from its brilliantly authentic style and quality. Indeed, for many, it’s a far more authentic retro than Triumph’s Bonneville even if the Brit has the far better name. All that’s reflected in appreciating values today. The later 800 may have more poke, but it’s not enough to make much of a difference and it lacked some of the quality touches of the original. The very latest versions are also quite expensive. But the original W650 retains the charm and character it always had and it’s rarity means it still stands out in a crowd.

Three things we love about the W650… 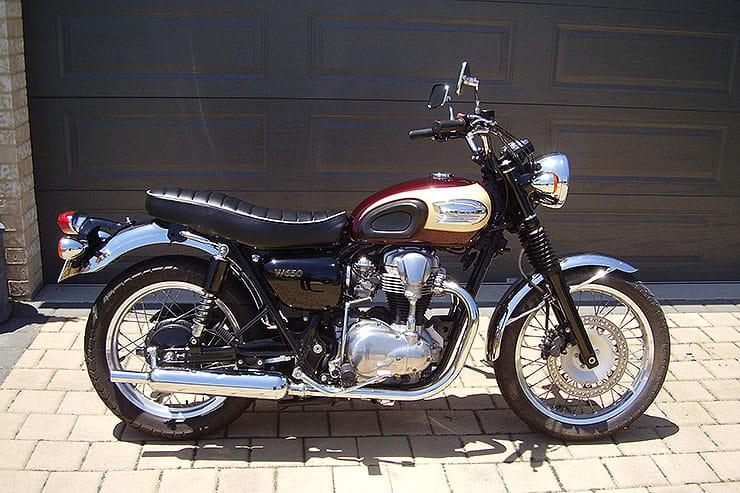