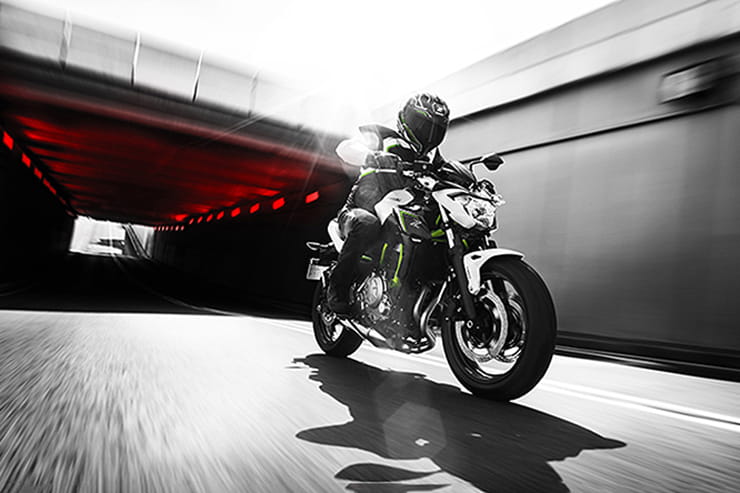 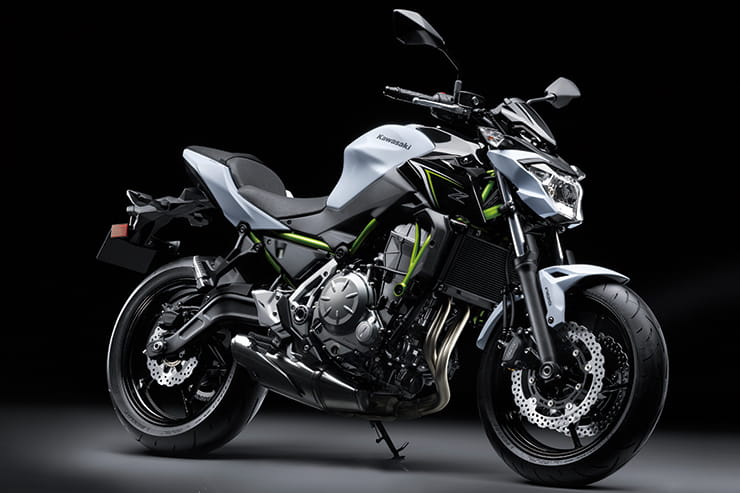 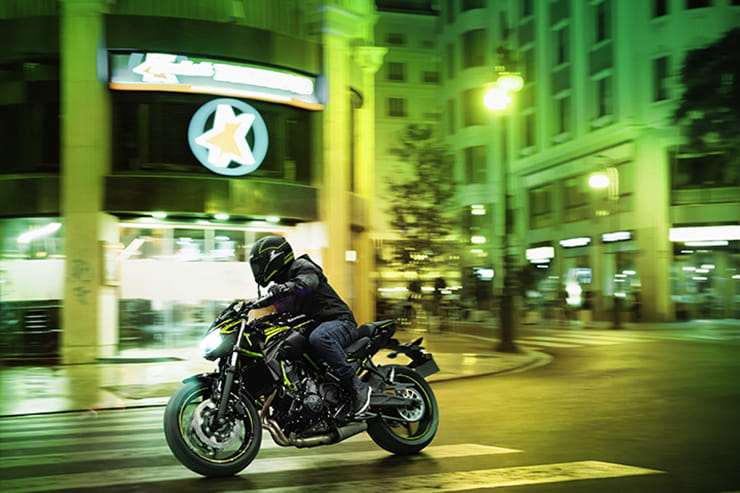 Taking over from the hugely popular ER-6n model, the Z650 was released in 2017 as Kawasaki’s budget middleweight entry. Completely re-styled using the firm’s sugomi philosophy (which is common to all Z-series bikes and basically boils down to loads of sharp angles and bright colours) and boasting an all-new chassis and swingarm, the heart of the Z650 remained a version of the ER’s parallel twin engine but in its new Z650 guise it was altered slightly for more performance in its low and mid-range areas. Updated in 2020 when it received a few styling tweaks and a TFT dash, the Z650 remains a charming middleweight that looks good, is pleasingly light and nimble to ride and delivers a good amount of drive from its peppy engine. Never as much of a crowd-pleaser as Yamaha’s MT-07 simply down to a lack of hype surrounding the model and the fact its engine isn’t as thrilling, the Z650 is a great used choice and one that is extremely solidly built and fairly well-priced.

In 2017 the Z650 cost £6099, which has steadily crept up over the years to the point a new one is £6949. Ok you get a TFT dash and a bit of a restyle but effectively it is the same bike so unless you desperately desire connectivity, don’t be too upset about getting the older model and saving a few quid. A first-generation Z650 will cost you just under £4000 in a private sale with dealers generally asking for close to £4500. You can find them in dealerships for £4000 but these are often quite high-mile bikes while private sales that are £3500 are usually hacks and best avoided. If you want the TFT dash, a 2020 bike is between £5000 and £5800 in a dealership with £5500 all you need to secure a real beauty.

The Z650’s motor’s performance has never changed and although it is true it did lose a bit of peak power (4bhp) when it evolved from the ER to the Z, it wasn’t much to shout about and certainly doesn’t detract from the parallel twin’s charm. Easy-going and punchy, it feels quite a relaxed engine when compared to the more lively MT-07’s parallel twin but this is no bad thing at all. Smooth and progressive in its power, the Z650 is one of those bikes that instantly feels ‘right’ to ride, and everything seems to be working together to make the overall riding experience as pleasant as possible. A bit old-school but still pleasant. The throttle connection is superb, the engine has a small amount of vibration but nothing too intrusive and the low and mid-range drive are plentiful without feeling too aggressive or sharp. It’s just a really well-developed engine that is perfectly suited to being ridden gently by a less experienced rider or thrashed to hell by one who wants to up the ante a touch. It can be restricted to 35kW to make it A2-licence legal if required.

As you would imagine from an engine that has effectively been in the game since the ER-6n first appeared in 2005 and has sold in vast numbers all over the world in a variety of guises (faired, adventure, sports, naked...), the mechanical side of the Z650’s motor is pretty solid. There aren’t too many major issues to be wary of and as long as the 7500-mile service intervals are kept fairly close to, and the valve-clearances checked every 15,000 miles you should be pretty safe. The main problems that owners encounter isn’t with the engine itself as such, more the bits that surround it and poor finish and electrical issues aren’t unheard of. A lot of owners have found the paint has flaked really badly off the engine after riding through winter and the exhaust system also comes in for a lot of criticism, not only for discolouring quickly but also cracking. As it is a one-piece unit, if it does crack you are talking a whole new system, which actually isn’t that dramatic with prices starting at £300 for a reasonable known brand’s system – well, as long as the studs aren’t rusted solid.... A few of the forums mention switchgear packing up and even ignition barrels stopping turning, so always check all is well here. Kawasaki know how to build a sweet gearbox and the Z650’s should be nice and slick with a light clutch action, so if it feels grabby and stiff assume the cable is on its way out, which isn’t a huge drama to replace. The clutch is a slip and assist unit, which is also good to see on a budget bike. Although there aren’t many major mechanical dramas with the power plant, always give it a really good check for any issues such as a rotten or damaged radiator, furred-up fasteners or corroded connectors, things that will hamper a mechanic when it comes to working on the bike and may lead to costly problems in the future. The exhaust studs, for example, are notorious for rusting and that means when you need to replace the system you run the very real prospect of one snapping, leading to a bit of a headache if the thread in the head, then needs replacing once the stud is eventually removed. 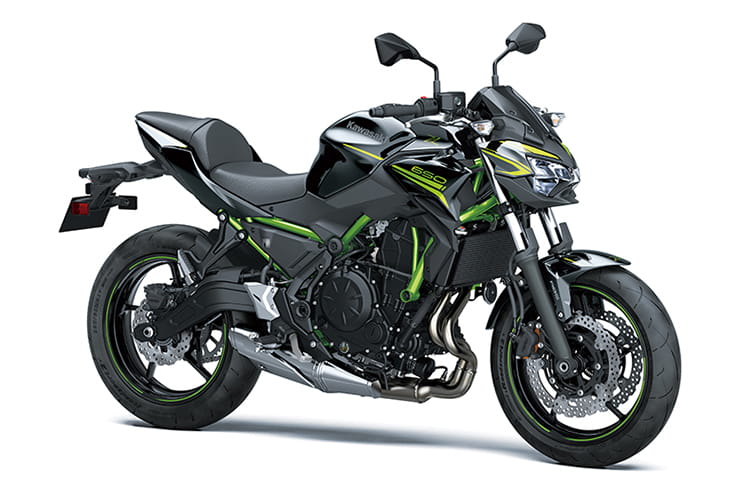 The Zed may only have a relatively small 15-litre tank, but it will merrily record 55mpg and that means a range of around 180 miles, which isn’t bad going at all. Kawasaki claim the Zed can record 62mpg – but this is a figure recorded on the 35kW restricted model so isn’t to be believed!

The major difference between the ER-6n and the Z650 comes from the frame, which was all-new on the Z650 despite retaining the same trellis design as before. Made from high-tensile steel, it weighs just 15kg in total (10kg less than the ER’s frame!) and has fairly sporty geometry to ensure the Zed retails the ER’s impressive handling. The swingarm was also updated, saving another 2.7kg in the process. Although the conventional forks look a touch disappointing and lack any adjustment, they are actually pretty decent for most road riding applications and the horizontal back-link shock (which has preload adjustment) is also fairly acceptable. Light, neutral and bags of fun when you up the pace, the Z650 has an impressively sporty turn of pace when requested yet manages to do so while still retaining a really assured feel and good manoeuvrability when in town. Just like the motor, the chassis exceeds expectations and while it looks a bit budget, to ride it more than delivers. As on any bike that is generally favoured by city riders and/or new riders you need to be very careful about crash damage when buying used, so always inspect the forks well for scrapes or bends, and also stand behind the bike and see if the bars appear level – twisted or bent bars are often overlooked after a small crash. Be wary of replacement levers, another sign of a crash, and if there are any protective engine covers etc fitted, peek behind to see if the metal is scraped.

Kawasaki stuck with the ER’s two-piston Nissin calipers for the Z650 and while pretty unimpressive visually, they work ok and the Bosch 9.1M ABS system is hard to fault for road riding. Nowadays you have to say inverted forks and radial brakes would be nice to see but in reality, that’s a case of fashion over performance. As they are a sliding design of caliper any corrosion caused by winter use can make the caliper stick, which is annoying but not massively expensive or hard to fix with rebuild kits costing less than £30. There is little point fitting braided lines so if you want more stopping, fit high friction pads as it is a cheaper and faster performance mod to do. 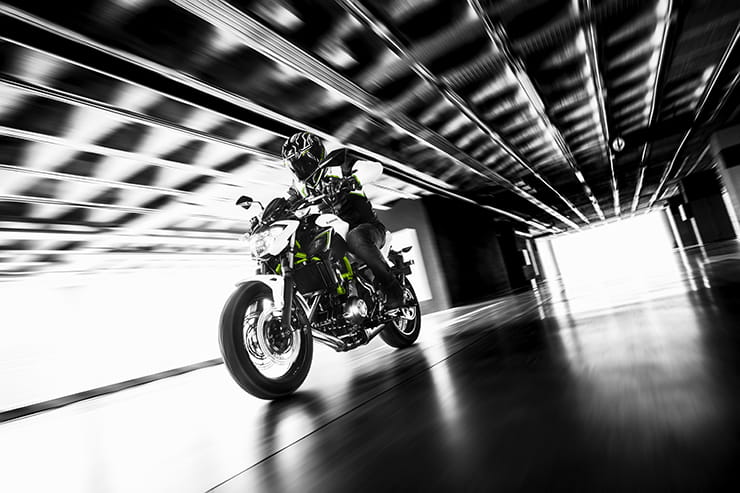 The Zed isn’t a brilliant touring bike due to its lack of fairing, but it can cover miles if requested. The 2020 update slightly altered the pillion seat to make it more comfortable but it’s seldom you see a Z650 with a passenger on the back. At motorway speeds the parallel twin is smooth with little vibrations, which is good news. In town the low 790mm seat height is reassuring for shorter riders while on the go the Zed riding position is pleasingly roomy for those who are taller. Realistically, however, if you want to go touring, buy the excellent Versys 650 or the Ninja 650 with its full fairing.

Aside from ABS your only tech is the TFT dash on the post-2020 model. Linking to Kawasaki’s free Rideology app, you get real-time vehicle information, service information and a vehicle locator (not GPS, just the last point the app and vehicle were linked!). The display will also indicate incoming calls and messages, although it won’t tell you the message or who is calling. If wish you can also record route and riding logs and share them with your mates.

When it comes to accessories, Kawasaki sell a fair few and you can get a pillion seat cover, top box, panniers, high seat, crash protection and even a full (road legal) Akrapovič exhaust system. Kawasaki sell a ‘Performance’ model of the Z650, which is basically a stock bike with a black screen, Akrapovič system and few other bits added. It costs about £1000 more than the stock bike but this difference is considerably less in the used world, so they are worth looking out for.

A fair few aftermarket companies also cater for the Z650 however generally you are talking the same add-ons, just at a bit cheaper price than Kawasaki sell them for.

The Z650 is a reasonably rapid, friendly, naked bike that looks cool and is very robust. It lacks the excitement you get on an MT-07 but in terms of competence, accessibility and fun it is very hard to fault. A really good bike that makes for a brilliant machine that will take a new rider quite a few years to outgrow due to its surprisingly competent handling and spirited engine, the Z650 deserves more recognition than it generally receives and is well worth considering if you are in the market for a used naked middleweight.

Three things we love about the z650… 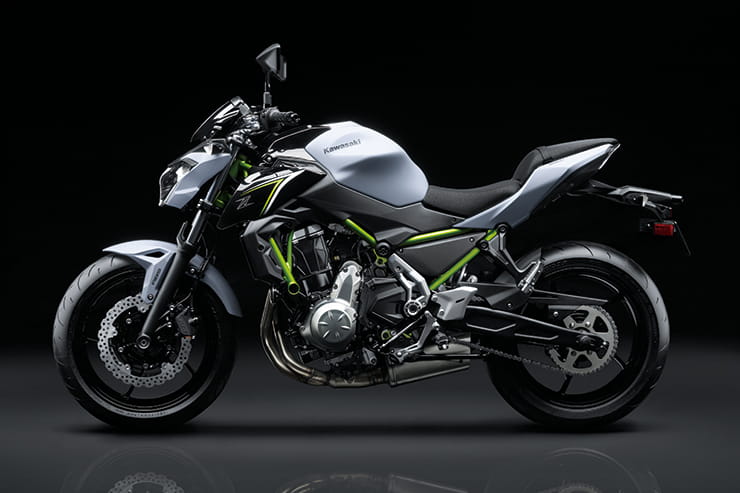 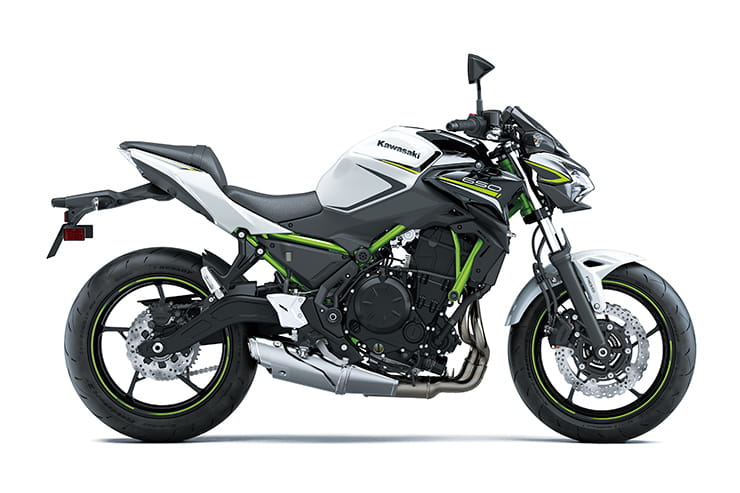