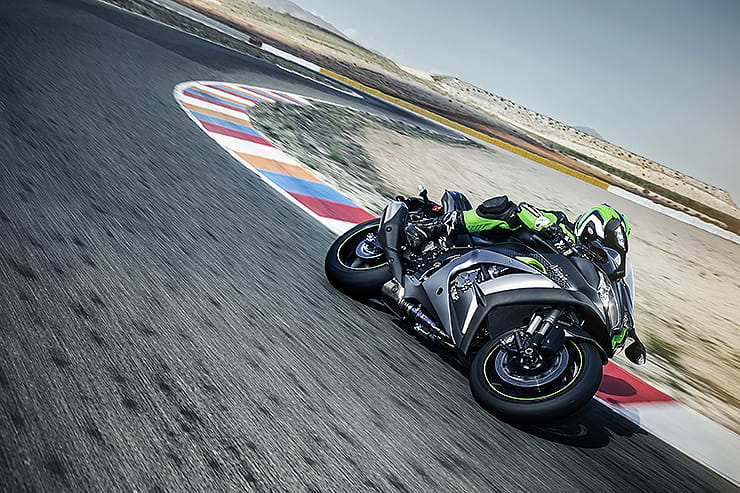 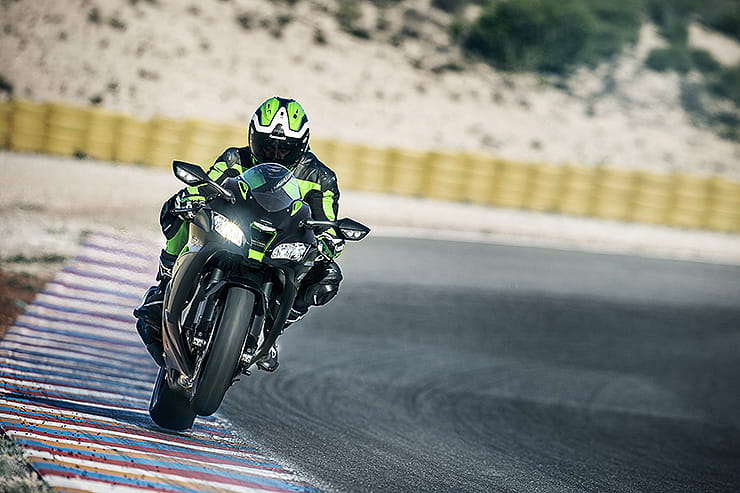 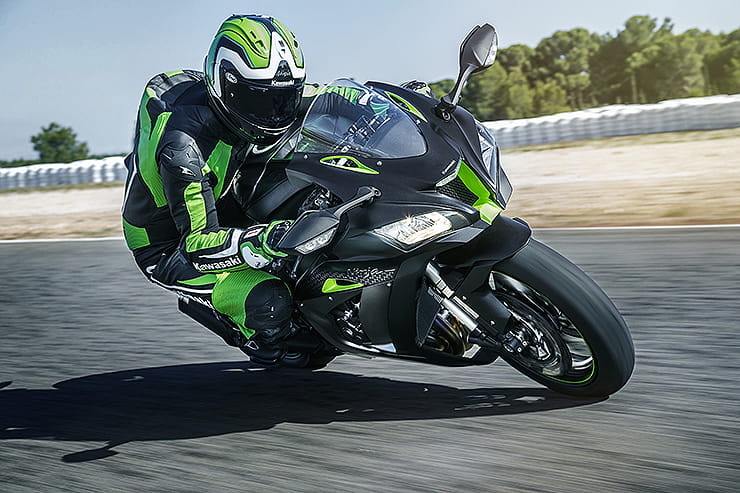 Designed by Kawasaki as a ‘high-grade’ Ninja model, the SE sits between the stock ZX-10R and the homologation special RR version. Effectively the stock bike with Marchesini lightweight wheels (from the RR) and a new semi-active suspension system built for Kawasaki by Showa, the SE commanded a fairly chunky £4650 premium over the base bike when it was unveiled in 2018. Was it worth it? Despite its enormous race success, the Ninja has never really sold that well in the UK and buyers were even less keen to stump up the extra cash for the premium model. While the semi-active suspension certainly helps smooth the traditionally harsh Ninja ride quality out slightly, it lacks the ‘cool factor’ rivals with their Öhlins units boast and isn’t amazing on track, two factors that conspired against it. In the used market it makes more sense and if you can get one at a good price it is a step above the base model in terms of its plushness on the road, however it’s not a game-changer and in many ways a base model with sorted suspension is a better buy, especially if you ride a lot on track.

The Ninja’s motor has always been aimed firmly at the track and that means on the road it can feel a touch lacking in the mid-range with a frantic top-end surge. While undeniably thrilling, it can also be quite frustrating when you aren’t in the mood. On track it is absolutely spot on and makes for a superb trackday engine that has bags of power to fire you out of bends and up the straights.

Despite the SE only being launched in 2018, it was updated (alongside the R and RR) in 2019 when it gained the revised ‘finger-follower’ head and a very small increase in power. Unless you know about the update (or spot the red cam cover) there is very little to split the two bikes in terms of performance (can you really spot a 2.8bhp gain in a motor that already packs nearly 200bhp?) or reliability so there is no need to rush out and get the newer one. The SE has always come with an up/down quickshifter as standard, which only activates above 2500rpm, and as long as you are up the rev range it is fairly slick in its operation. If you want a slightly throatier exhaust note, and many Ninja owners do, Kawasaki’s performance Akrapovič slip-on silencer remains road-legal but adds a nice deep resonance to the Ninja soundtrack without overstepping the mark or running the risk of failing a trackday noise test. Very few sportsbikes do high milage so you are unlikely to encounter an SE that is too close to its 15,000 miles valve clearance check, but a few are touching 10,000 miles so always have this number in the back of your mind as it ups the service from a reasonable £200 for a minor one to a hefty £600 to get the clearances inspected. Overall, on a bike as new as the Ninja you are unlikely to encounter any reliability issues and it is a safe used buy. 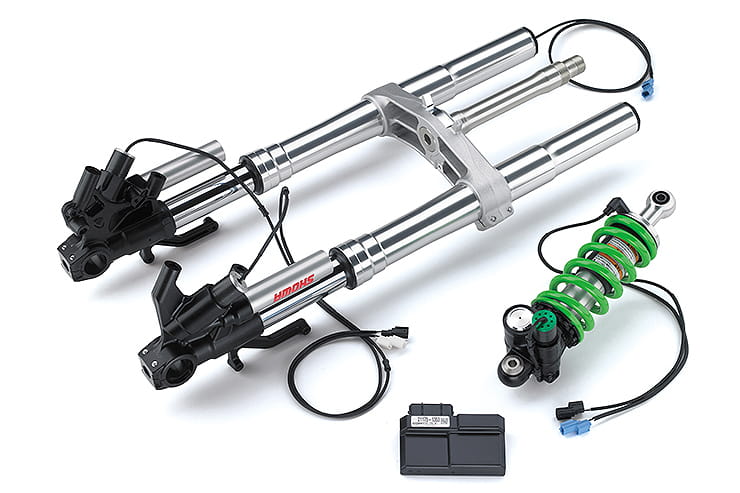 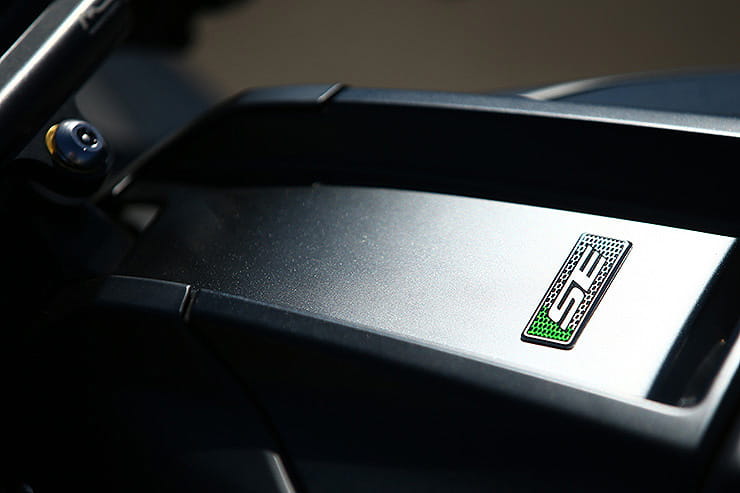 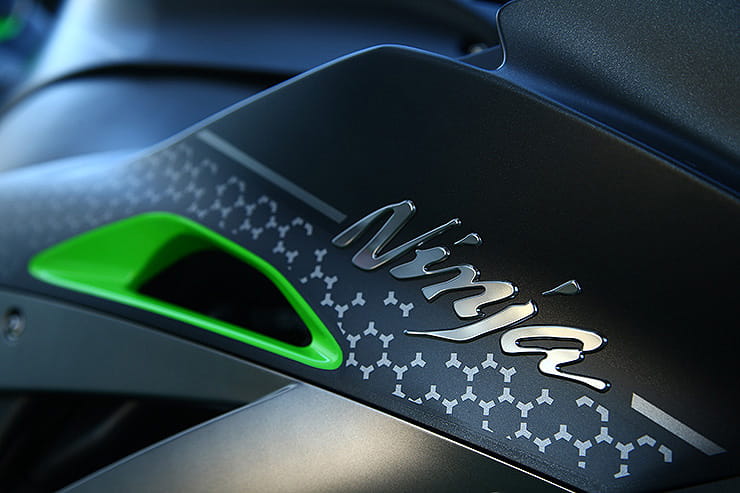 The Ninja isn’t exactly known for its economy (its clocks also lack a fuel gauge, you only get a warning light...) and economy figures of in the low 30mpg range are to be expected with general road use. Take it easy and you can record better figures but the Ninja just isn’t that kind of bike...

Here is the area the SE separates itself from the stock bike and on the road you have to hand it to the Kawasaki Electronic Control Suspension (KECS) as it does noticeably enhance the ride quality. A bit more cornering agility over the stock bike is mainly down to the lightweight Marchesini wheels but the KECS is responsible for smoothing out the Ninja’s often a bit harsh and wayward ride. Reacting at a speed of just one millisecond to inputs from stroke sensors in the fork and shock, the KECS also checks data from the IMU and bike’s ECU every 10 ms to alter the damping to suit the bike’s attitude. And it works. There are two fixed settings – Road and Track – as well as a Manual one that you can customise to one of 15 damping levels. In Road the KECS allows the bike to float over bumps in the road and noticeably calms its often-lively front end down while in Track mode the ride is noticeably firmed up for more aggressive inputs. Although the preload on both ends isn’t electronically damped, this isn’t too much of an issue as once you have set the bike’s sag to suit your weight it shouldn’t need altering too much. Does it make the already very sporty Ninja even sharper handling? To be honest not really, so if track riding is your thing the non-active suspended R is a better bet, but for road riders it is a noticeable improvement.

Armed with Brembo M50 calipers the Ninja has a traditionally sports-focused braking set-up and you get braided lines as standard, which is good news for track fans as they add a welcome bit of extra bite into the system. The angle-sensitive ABS is very good on both the road and track and overall it is hard to find fault with the Ninja’s stoppers. If you want even more power, just swap the pads for aftermarket high-friction alternatives. 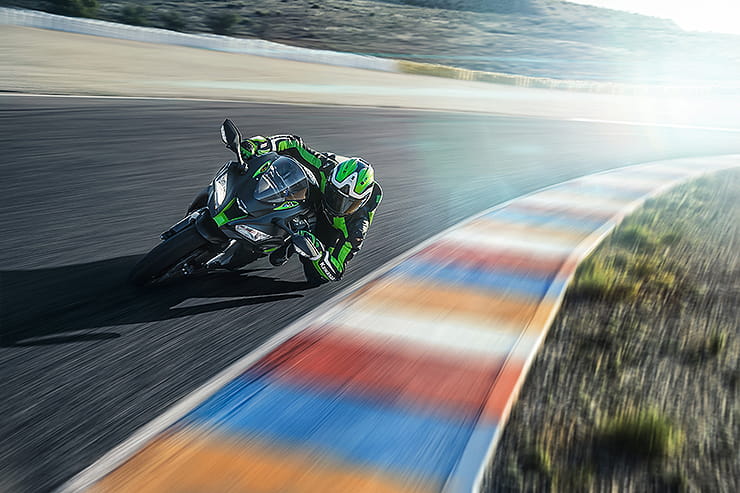 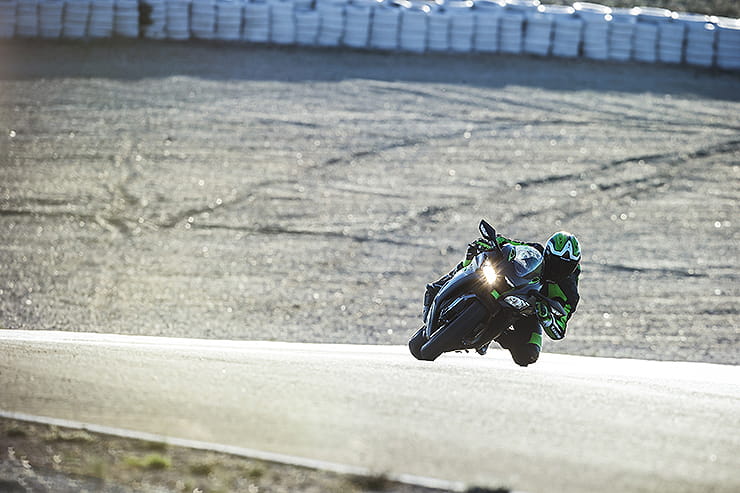 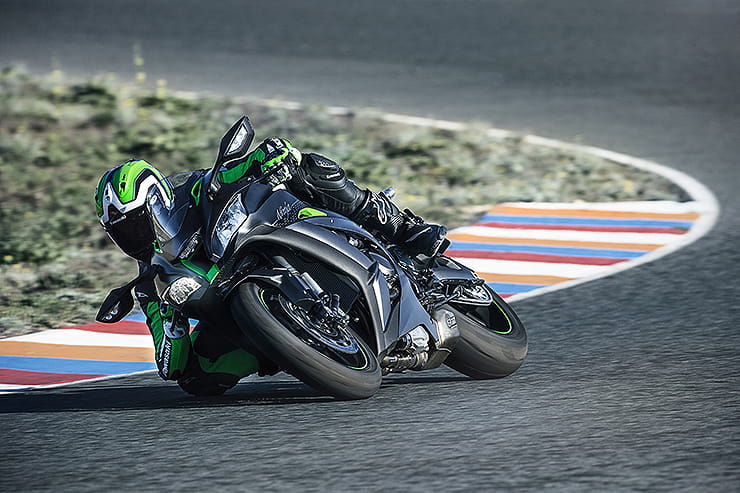 The Ninja is a really sporty litre bikes and not great for covering distance on. The seat is firm, screen low (most owners fit a taller double-bubble option) and the clip-ons really uncomfortable on your wrists. So no, ideally you wouldn’t want to take one touring...

The SE is based around the 2016 Ninja ZX-10R and that means you get a very comprehensive electronics package as standard. Alongside five levels of angle-sensitive traction control, there are three power modes, three levels of launch control, adjustable engine braking and also cornering ABS, which has an optional extra track mode to either deactivate the rear ABS or the whole ABS system completely. The SE adds Showa’s KECS to this package with Road, Track or Manual settings that alter the damping (compression and rebound) front and rear. In ‘Manual’ mode you can select one of 15 damping levels and then let the semi-active function take over. Spring preload is manual front and rear. In terms of accessories, Kawasaki sold a ‘Performance’ version of the SE (and all its Ninja models) which adds a tank pad and carbon Akrapovič slip-on (road legal) for £700 more than the stock bike (£19,649). A lot of bikes have race cans fitted (road legal and not) and ECU re-maps help calm the throttle a bit and make it less jerky. A few owners increase the size of the rear sprocket in an effort to introduce a bit more mid-range and crash protection, tail tidies and the likes are common. Most SE models remain quite standard where the base bike is more likely to be altered, it’s just one of those bikes.

This Ninja ZX-10R SE is a weird bike. Overpriced considering what you were getting in stock trim, in the used market it isn’t a bad option but by the same token not the best. If you really like Ninjas and enjoy their aggressive attitude, aren’t too fussed about trackdays and want a bike to feel plush on the road, the SE makes more sense in the used market than the new one.

Three things we love about the ZX-10R SE… 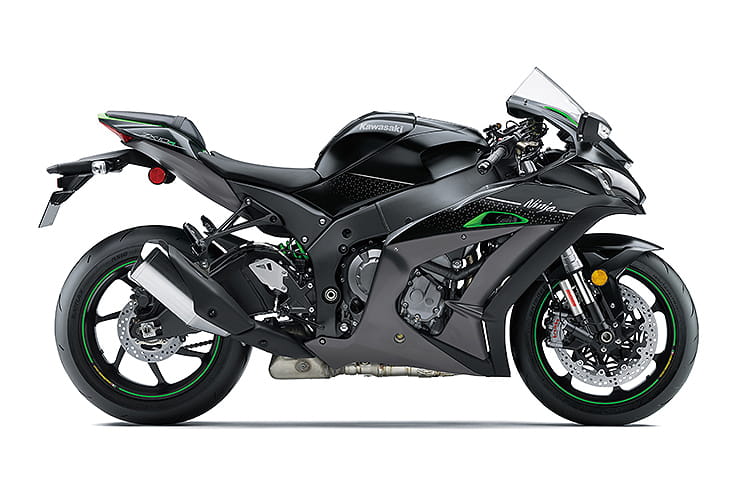 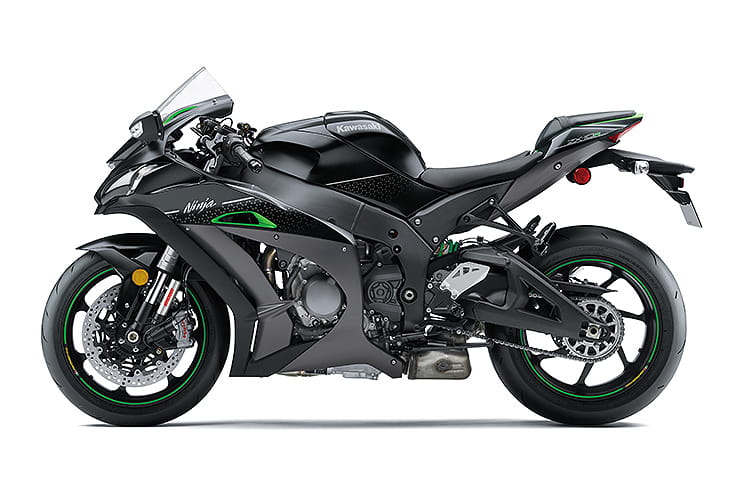 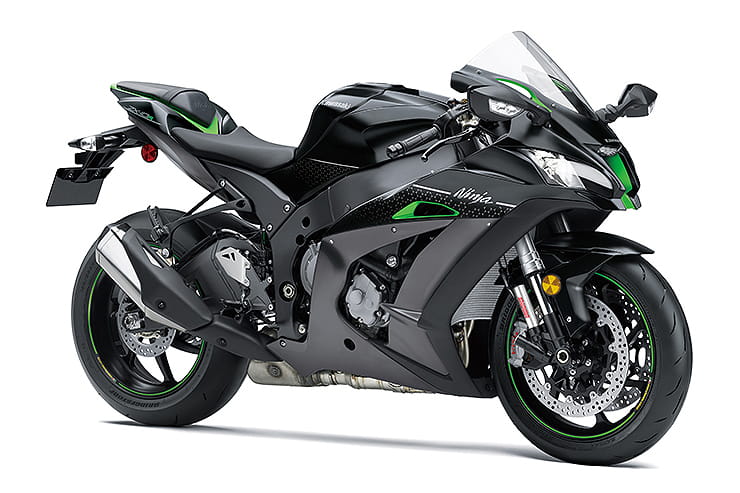