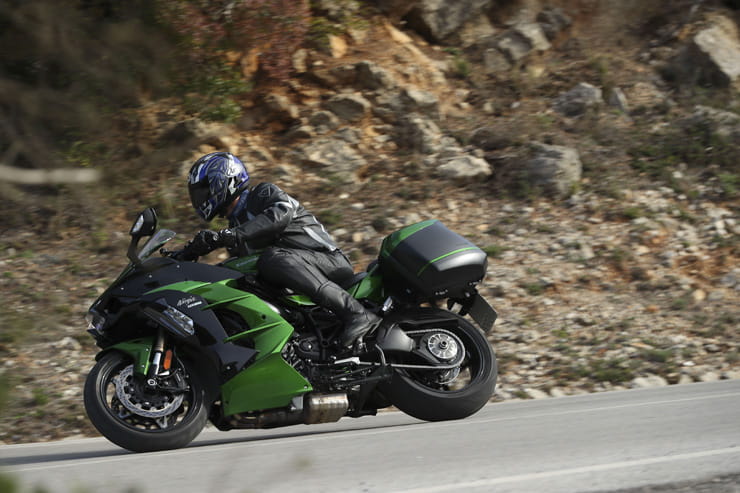 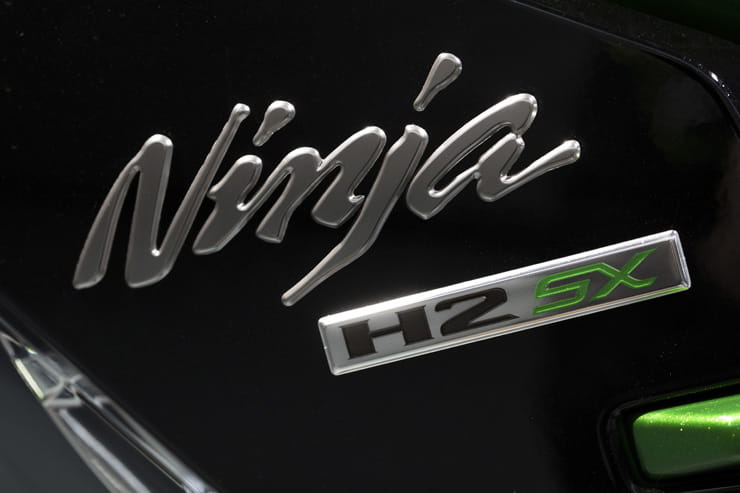 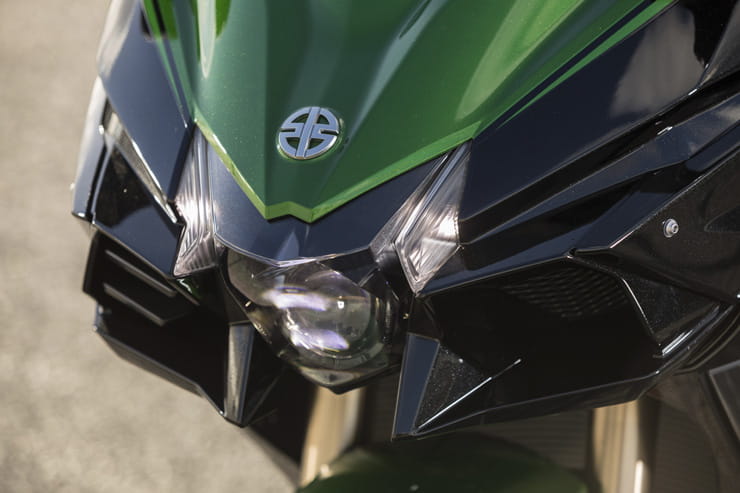 The Ninja H2 SX has plenty in common with the machine that started Kawasaki’s supercharged family three years ago. Just like that original Ninja H2, the SX has sharp-edged styling, features a blower bolted to its four-cylinder engine, and answers a twist of the throttle by doing its best to rip its clip-on bars out of your hands.

But the Ninja H2 SX is a very different machine to the outrageous original H2. It has an aggressive, origami-like full fairing instead of a half-fairing, its screen is taller, those clip-ons are higher and it’s built for comfort as well as speed. The supercharger that is mostly hidden behind the bodywork is designed for economy as well as power. And although the SX makes a claimed 197bhp, its throttle response is positively civilised. 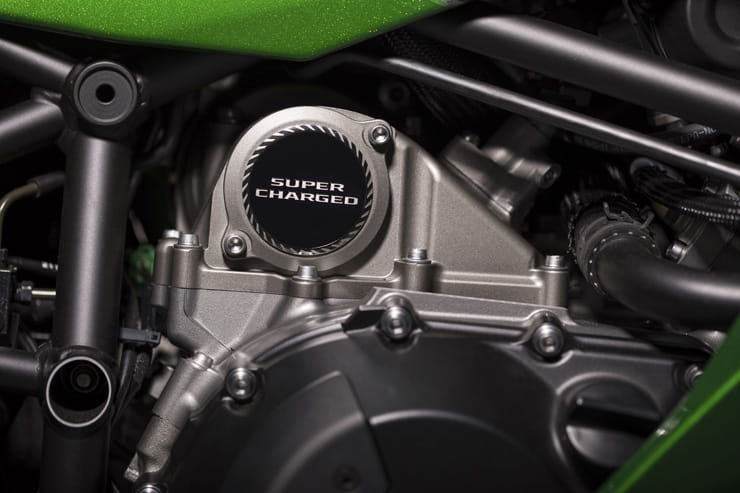 The SX certainly does Fast when requested. On the Portuguese launch it devoured the Estoril circuit’s long straight in seconds, and was still accelerating at an indicated 175mph when I had to brake for the second-gear turn one. But on the previous day’s road ride it coped respectably well with everything from motorway to cobbled streets and hilly hairpins, feeling more like a ZZR all-rounder than the latest member of Kawasaki’s supercharged crazy gang.

That’s not surprising given the number of the SX’s new parts, starting with the 998cc, 16-valve engine that is based on the existing H2 unit (which itself was derived from the ZX-10R’s). New internals include cylinder head, cams and crankshaft, with reshaped pistons contributing to an increase in compression ratio from 8.5:1 to 11.2:1, which helps increase thermal efficiency.

The supercharger and intake system are also much modified. The impellor’s blades, whose diameter is unchanged, are set at a slightly shallower angle. The aluminium airbox is smaller (five litres rather than six) and incorporates a diffuser that helps eliminate the knocking that might otherwise have resulted from the increased compression. 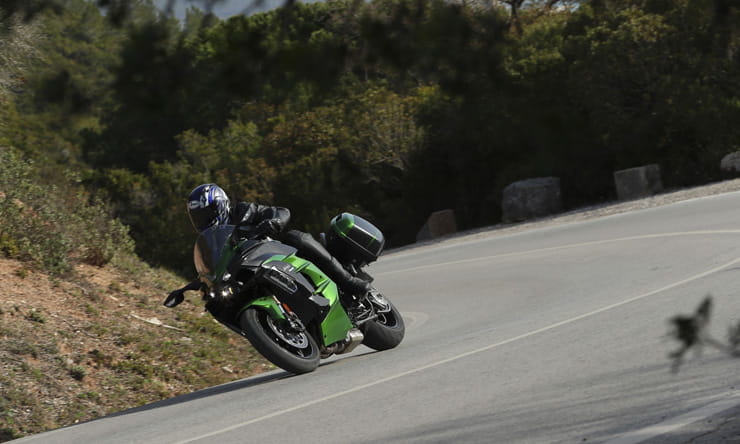 In similar fashion the chassis also keeps the same format – tubular steel trellis frame and single-sided aluminium swing-arm – while changing key components. Diameter of many of the main frame tubes is increased from 22.2 to 28.6mm, and the rear section is considerably beefed-up with additional tubing, allowing payload to be increased from 105 to 195kg, so a pillion and hard luggage can be carried.

The steering head was moved forward by 15mm, allowing improved steering lock; the swing-arm is also lengthened by 15mm, contributing to the wheelbase growing by 25mm to a stability-enhancing 1480mm. Tilting the engine forward in the frame by two degrees lowered the centre of gravity slightly. Suspension combines 43mm forks and a remote-reservoir Kayaba shock; both ends are multi-adjustable and the shock has a remote preload adjuster.

There’s plenty of H2 family resemblance, with that sharp-edged fairing’s nose carrying the River Mark logo that the Kawasaki corporation bestows only on stuff that’s a bit special. The same logo comes up when you turn the bike on to light up the TFT dash that is a feature of the upmarket H2 SX SE model. The SE also differs from the standard bike with features including cornering headlights, heated grips, taller screen, machined wheels, centre-stand and a two-way quick-shifter. 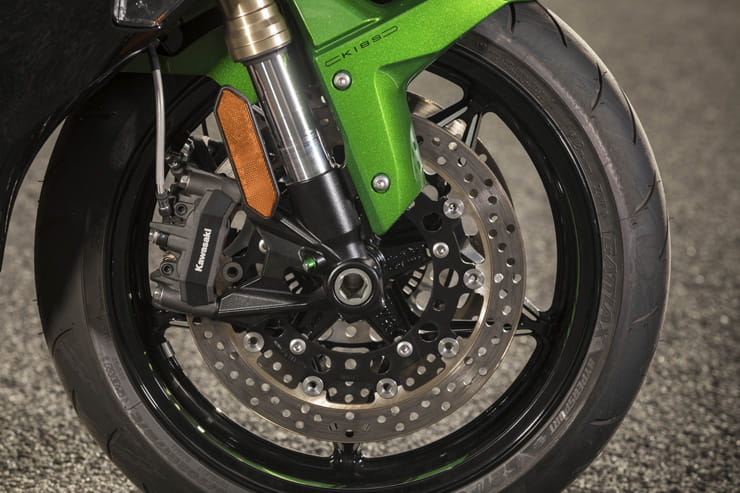 Only the SE comes in green paintwork, which has a high-quality metalflake look without matching the stunning mirror-finish that contributed to the original H2’s high price. Differences from that bike are clear when you climb aboard the low seat, behind a screen that is notably larger and barely have to lean forward to bars that are slightly higher than the ZZR1400’s, let alone the racier H2’s.

I was glad of that and the extra steering lock at the start of the launch route, which began by heading through morning rush-hour traffic in Cascais, outside Lisbon. The SX has three rider modes, with M (for Medium) cutting output to 75 per cent though the range, and L-for-Low chopping off another 25 per cent from Full power. The options are worth having but throttle response is sufficiently refined that they’re not really needed in the dry.

It’s a big change from the distinctly brutal original H2, and an advantage in most situations. Instead of lurching forward slightly uncontrollably, the SX feels much like a ZZR1400 as it pulls obediently if not particularly enthusiastically from 4000rpm or below, kicks harder through the midrange and from about 6000rpm really comes alive, as the boost figure at the bottom of the dial quickly rises from its base setting of 100 (per cent of atmospheric pressure) towards double that number.

By 8000rpm it’s really steaming – bars going light in the first three gears, engine feeling deliciously smooth and sweet-revving as the analogue tacho flicks towards the 12,000rpm redline. It’s much like a very smooth ZZR1400 with a chirping sound as you shut off (apparently caused by the supercharger blades’ tips breaking the sound barrier). I was glad of the SE model’s shifter, which worked well in both directions through the box. Electronics include three-stage traction control, which has to be disabled for proper wheelies, and a launch control that few owners are likely to use. 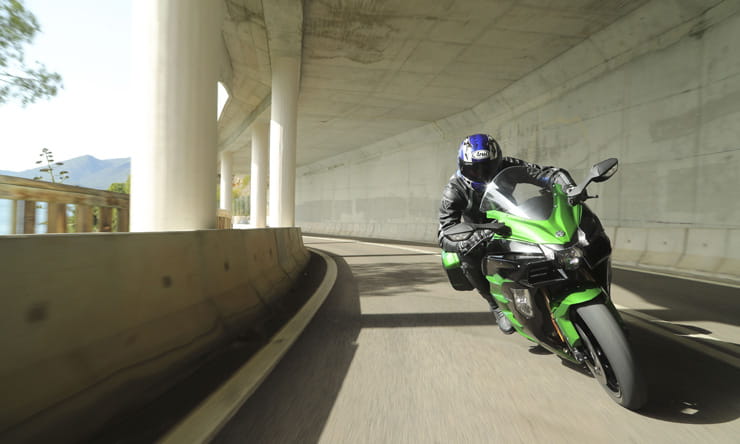 The fairing and screen did a decent job of keeping off the wind at speed, but I was disappointed that the screen isn’t adjustable, so predictably generated some annoying roar unless I was in a racer crouch. Ironically the humble Z1000SX provides some simple adjustability. Project leader Hiroyuki Watanabe said the H2 SX’s extra performance meant that adding adjustability would have required a very strong, and therefore heavy, screen. There’s also no hand protection, which many sports-touring riders would appreciate. At least the SE’s hot grips were fairly powerful.

Comfort otherwise seemed pretty good on a day-long ride with numerous breaks. The seat is quite low but better padded than it looks, and there’s a reasonable amount of legroom. (More than the ZZR1400 gives, according to Kawasaki.) A pillion gets solid grab-handles. The stylish GIVI accessory panniers can each hold a full-face helmet; there’s no option to add a top-box.

As for fuel economy and range, that’s perhaps even more dependent on how the bike is ridden than it is with normally aspirated bikes. Kawasaki claim the SX is almost as fuel-efficient as the Versys 1000 during their homologation testing, averaging 48mpg. Maybe it is; and maybe some owners will set the cruise control at a sensible speed, get close to 200 miles from the 19-litre tank, and be delighted.

But don’t expect to exploit this 200bhp superbike’s performance and cross Europe on a few tanks of gas. Some journalists reported getting better than 40mpg at the reasonably brisk launch pace. But using the acceleration whenever possible brought the figure tumbling well below that, and serious throttle abuse had the Ninja gulping gas at under 30mpg. Arguably only to be expected, and just another running cost along with rear tyres and speeding fines… 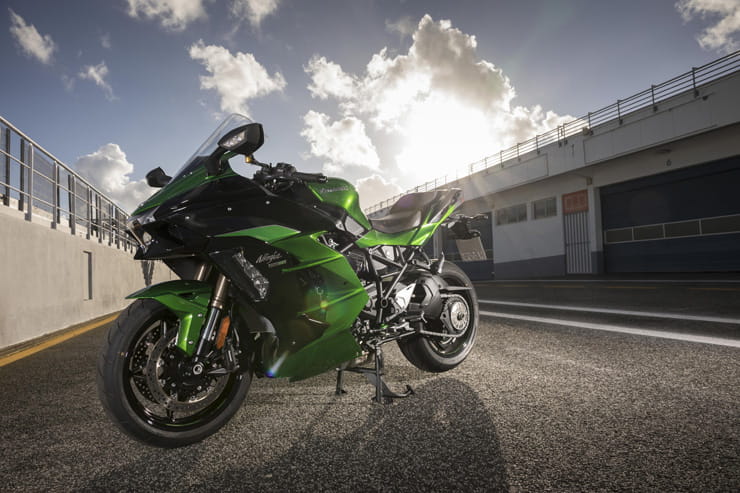 Handling was basically very good, provided you don’t take one look at the SX’s sleek lines and expect it to behave remotely like a ZX-10R. With a kerb weight of 260kg the SE version’s 9kg lighter than the ZZR1400 but 18kg heavier than the Ninja H2, let along the 10R. Its steering geometry is fairly conservative, its wheelbase stability-enhancingly long, and its suspension set for comfort as much as control.

That was fine in town, where manoeuvrability was okay despite the clip-ons; and on the motorway, where the bike was impressively stable at silly speeds even with panniers fitted. Steering was initially slightly ponderous, but adding a few clicks of shock preload, via the easily used remote knob, sharpened it usefully. Ride quality remained respectably plush, and the Ninja despatched main-road curves with confidence and control.

But in slower turns the bike’s length and weight counted against it, and were exaggerated by the bike’s rather abrupt deceleration on shutting the throttle (probably due to lean fuelling demanded by Euro4). You can hustle down twisty back-roads reasonably quickly, but you’re conscious of a slight vagueness and a fair bit of pitching under acceleration and hard braking. Firming up the suspension would doubtless help to a degree but, in the absence of semi-active units (which you might hope for from a posh sports-tourer), only at the expense of ride quality.

The SE model’s braking was both powerful and controllable, though the ABS doesn’t work in corners (despite the Bosch IMU) and the anti-lock system activated earlier than some under a heavy handful. Hopefully the standard SX, which doesn’t get braided lines, stops just as well. I found the Bridgestone S21 tyres fine although a couple of riders said they lacked confidence in them. There was certainly enough grip to bend the long hero-blobs on track, and sufficient ground clearance for a decent pace before anything solid touched down. 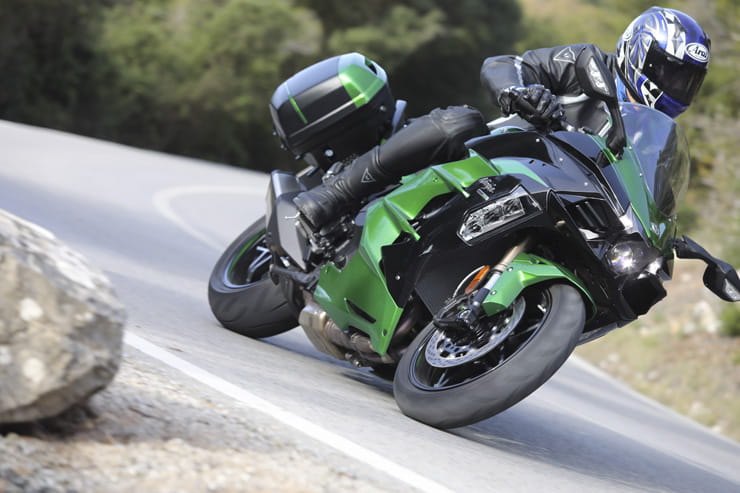 Perhaps the fact that Kawasaki gave us a brief track blast at Estoril, but prevented flying laps with coned-off sections, sums up the unique, slightly odd-ball Ninja H2 SX rather well. It’s fast and aggressive but not a sports bike; and yet nor is it simply a powerful, high-end sports-tourer. Think of it as some sort of natural evolution of the admirably sensible Z1000SX, and you might be disappointed.

On the other hand, think of this SX as an almost-as-fast-and-crazy version of the outrageous Ninja H2, with better throttle response, the ability to carry a (brave) pillion and luggage, plus a more accessible price of £18,099 (£15,099 for the standard model), and this addition to Kawasaki’s H2 family makes plenty of sense. Or at least, comes as close to making sense as a 200bhp, supercharged superbike is likely to do… 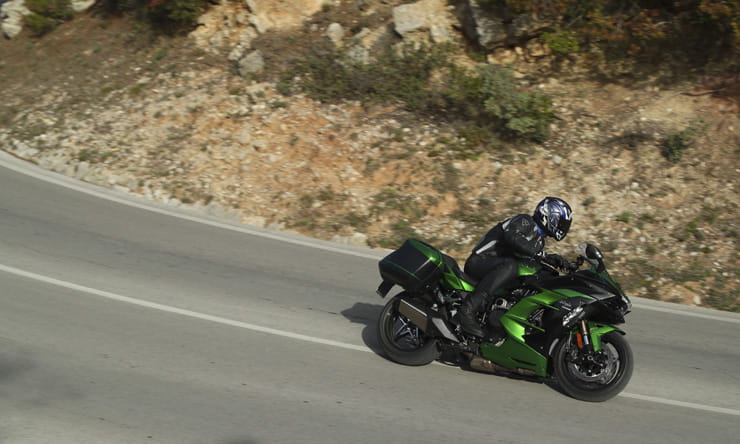