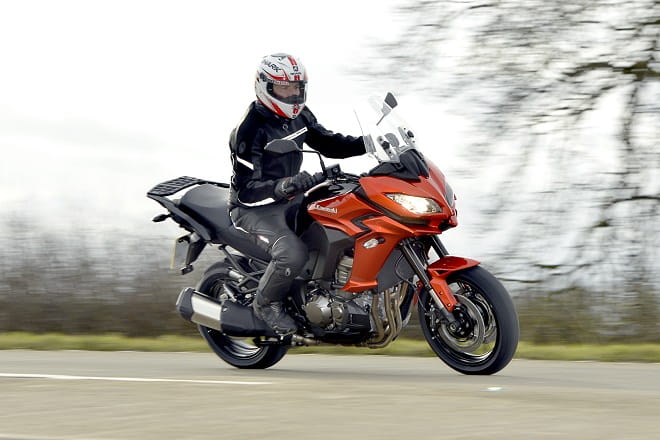 Manufacturers hedge their bets and spend many months working on the logistics of the all-important press launches of their latest models often in a warm European country during winter. They’re not to be blamed and quite frankly I prefer riding in comparatively warmer climates too.

Kawasaki chose Sicily to launch their restyled and revised-for-2015 Versys 650 and 1000 models back in December.

And yet there I stood, in a lay-by on the A6003 near Rockingham in January with -2 degrees Celsius showing on the LCD instrument panel, smiling. Why? Because for the majority of the UK’s potential Kawasaki Versys 1000 customers, these conditions are considerably more recognisable and realistic than circulating Mount Etna.

Ok, it was a sarcastic smile. 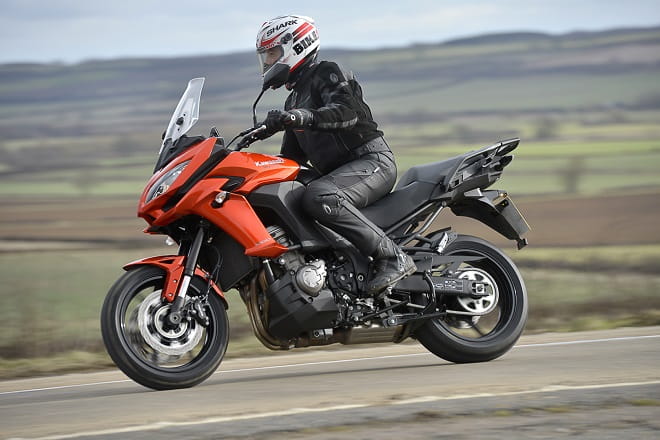 Instantly the new Versys (which stands for “Versatile System” incidentally) 1000 is aesthetically far more pleasing on the eye largely thanks to its side-by-side headlamps, redesigned beaky-style front cowling and sharp, angular fairings. The dual-purpose, inline four bike also gets 2 extra bhp and a reinforced chassis to improve luggage options, namely the nifty one-key fitting system. If you recall the previous model couldn’t have its top-box and panniers worn at the same time, well it could but Kawasaki never recommended it because of the total payload. Not a problem on the new bike thanks to the stronger subframe which also happens to contribute to its weight increase of 11kg.

Kawasaki have ended up with vast improvements to an already strong, capable long distance sports-tourer which will be a winner for those who enjoy the comfort and mellowness of a tourer with slightly more adventurous looks, a big fuel tank, grunty motor and space for luggage. The range starts below £10,000 so there is a lot of bike on offer for your buck. 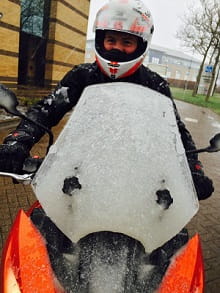 Two power modes (full and low which cuts output by 25%) are joined by three traction control settings. Modes 1 & 2 are designed for dry road conditions, offering maximum acceleration while Mode 3 is for low traction i.e. wet roads, and focuses on riding stability. Kawasaki chose a pair of excellent tyres for the Versys 1000 – the Bridgestone Battlax T30 Sport Touring shoes are worthy of praise.

I road the bike for a week yet on the day of our photoshoot, Mother Nature threw everything she had at us; sun, rain, freezing temperatures and finally, snow. It was cold throughout but the roads weren’t damp to begin with so I was able to use as much of the 118bhp as the B-roads of Northamptonshire allowed. The power is understated; you know the world is going passed at speed but the engine and exhaust note is not in-your-face abusive. As the day wore on the snow came yet the Kawasaki didn’t flinch, coping with the wet and miserable roads as if it were second nature. And, like a pleased labrador returning the stick to its owner, the Versys obeyed orders and tramped on proudly showing me that while rain and snow were not part of the Sicily launch, it didn't matter to this tourer. Heated grips and hand guards would have been very welcome but at least the adjustable screen did a fine job. Moving the screen is a little cumbersome and old-fashioned (unscrew two ugly knobs on the outside of the screen to slide it up and down two runners) but does have a 65mm range.

Long travel front and rear suspension with a remote rear pre-load adjuster are among the revisions for 2015 and are all welcome for an enhanced ride quality. The Versys 1000 is a tall and comfortable bike which conquers low-revs and sweeping bends alike but even with refinements for this years’ version, the model is still found wanting in some areas. 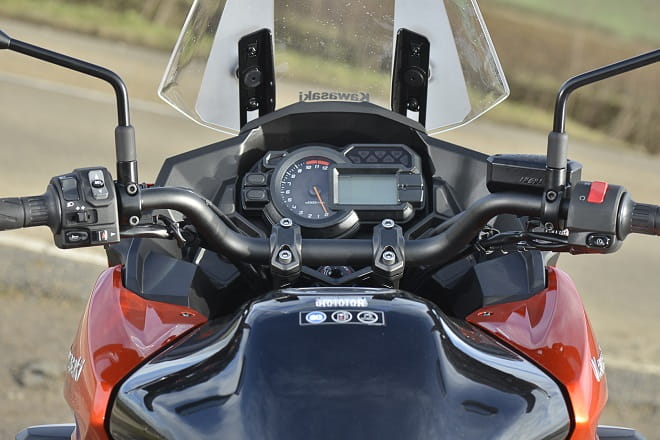 The instrument panel is basic and hides the necessary information with a small display surrounded by plenty of black plastic. An analogue rev counter and basic LCD display should be improved upon for next time. Even a gear indicator can't be that difficult or expensive to include for the base model yet it's only the top spec GT version that houses this fairly standard expectation in the three-bike Versys 1000 range.

Cruise control is not even an option which is a little baffling for such a semi-touring focussed bike and the seat is not adjustable either. The seat and riding position is comfortable however. There’s plenty of room for the rider to move around and the pillion seat is noticeably wide and sculpted in favour of the bike being used two-up. Handlebars are wide and allow for a tall seating position which in turn offer a decent steering feel. A centre stand does come as standard as does a good spec ABS system which works admirably with the larger 310mm discs. The engine braking is noticeably hearty as well. 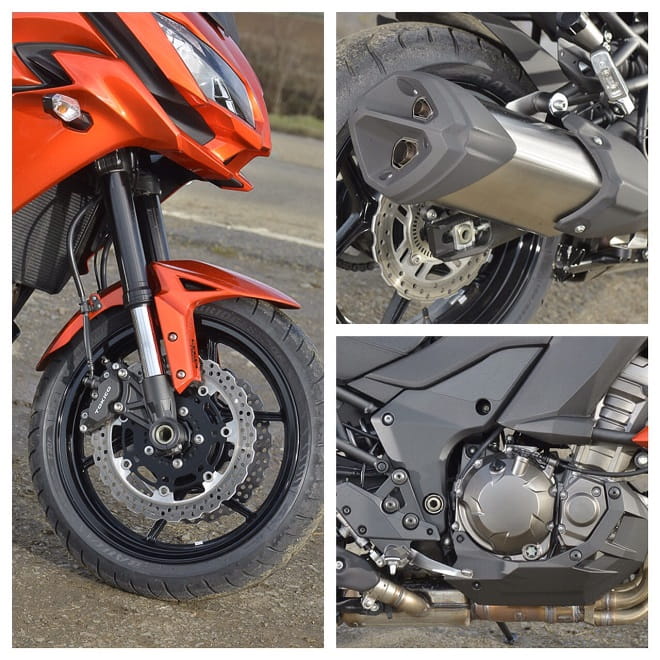 The inline four provides plenty of low-down heave out of the tighter corners and away from the lights, overall Kawasaki have revised the engine well. Even in a higher gear the Versys 1000 won’t argue if the revs are down around 2,000rpm. The engine pulls just fine in the lower range with purpose and of course will take you places a little quicker if you aim towards the 10,000rpm red line but you have to work it a bit to get it there.

The Versys 1000 is not a thrill ride but it has a purpose and serves it well. Just like its name suggests, the bike is ‘Versatile’, it will take you over 200 miles without needing to re-fuel and when it does you’ll jump off and feel like you’ve ridden 10 miles, ready and refreshed to ride on. The luggage options total an impressive 115 litres of storage area (top box: 45-litre, 2 x 35 l-litres panniers) with the top box good enough for two full-faced lids.

The three versions of the Versys 1000 are available in UK dealerships with prices starting at £9,749 for the standard model, £10,399 for the Tourer (includes panniers and hand guards) and £11,099 for the top spec Grand Tourer (also adds the top-box, driving lights, 12V socket and digital gear indicator).

Competition is tough in this sector with plenty of so-called adventure-tourers to choose from: 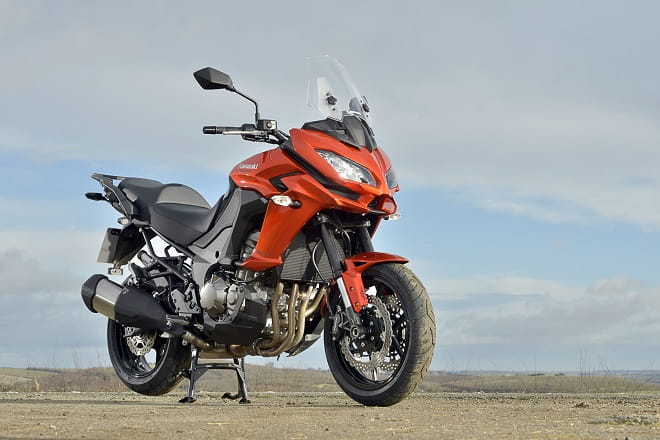 Versys 1000 or one it its rivals, which would you choose?