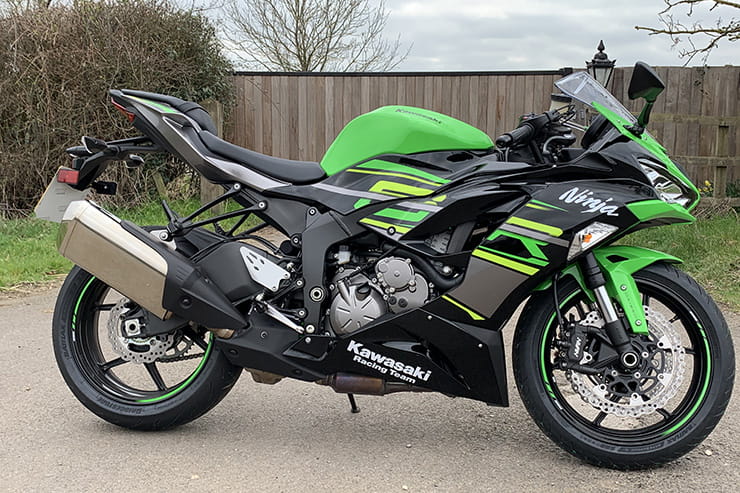 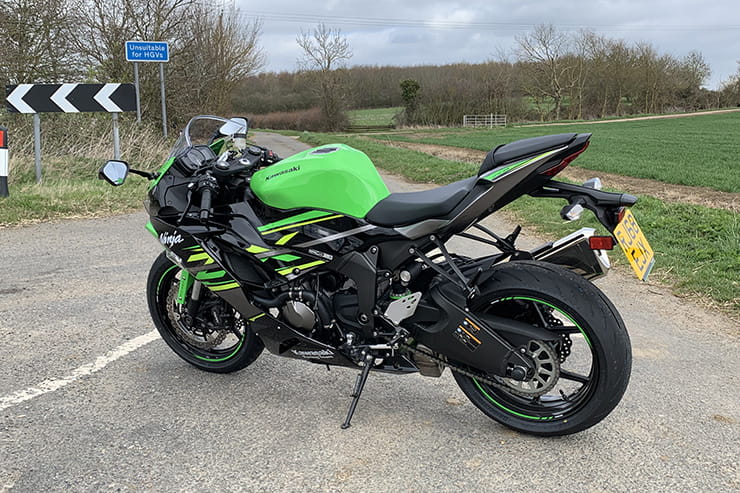 It’s a traffic light. In Mansfield. Hardly the Nürburgring and not the place Kawasaki’s designers had in mind when they were planning the performance envelope of the 2019 ZX-6R. But this is where we happen to be and this rider has a smile as wide as his saggy, ageing face muscles allow. Light goes green, release the clutch and wind it on. 0-16,000rpm in as much time as it takes to say it. By the top of second gear we’re doing oh-so-many mph and already on the brakes because whoever plans the timing of Mansfield’s traffic lights assumes that drivers take more time between junctions and enjoy the view of, er, Mansfield.

All of the things that make the ZX-6R such a great bike on the backroads and racetracks – the fast-revving motor, strong acceleration, sharp, but predictable steering, compliant and controlled suspension and confidence-inspiring brakes – also make it a surprisingly good bike in town too. Nipping in and out of traffic, taking advantage of the smallest gaps (you might have to fold the mirrors in), crazy avoidance braking and putting a daft ‘still-getting-away-with-it’ smile on your face at every set of traffic lights. Imagine the stresses going on inside that motor as two pairs of pistons go from 25 ups and downs per second at idle to 270 times at the redline. Childish, churlish imbecilic behaviour revisited. Grinning like it’s 1995, haven’t blinked since Nottingham. 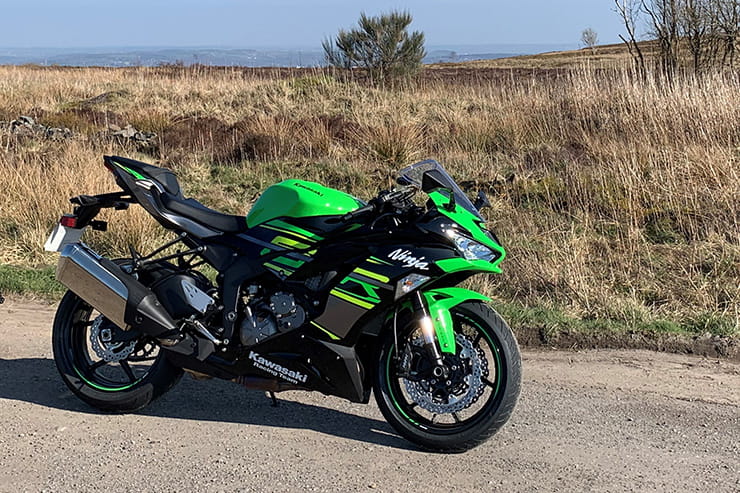 At £9499 (plus another £200 for this KRT paint scheme) the ZX-6R undercuts Yamaha’s YZF-R6 by a couple of grand. That’s a hefty saving for a bike that’s fully compliant with Euro 4, has state-of-the-art suspension and brakes and this many grins-per pound. It must also have the highest rpm-per-£ ratio of any motorcycle out there. A typical PCP deal with a £1000 deposit over 37 months will cost £128 per month with a £5300 final payment.

128bhp and 52lb-ft torque from 636cc are respectable figures in 2019, but the speed at which the ZX-6R revs makes it feel even more powerful than that. Kawasaki have geared the bike about 30 per cent lower – roughly 1000rpm for every 10mph (other 600s tend to be more like 800rpm per 10mph) meaning it loses a few mph at the very top end but has much stronger acceleration in every gear through the whole rev range. So much so it feels like you could set off in fourth gear at one extreme, but you can also ride it like a giant twist and go in top and still have clean drive and strong acceleration. 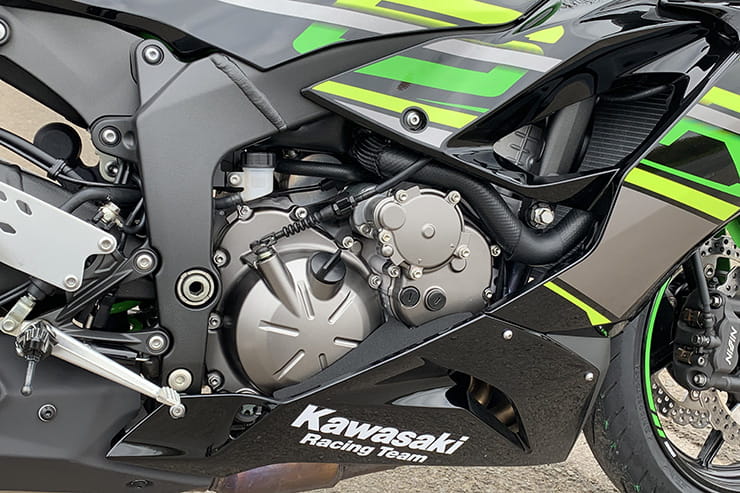 Say hello to the hardest working engine in motorcycling

Kawasaki’s reborn ZX-6R has updated suspension, styling, headlights, electronics and instruments. But the most significant difference to the riding experience comes from fitting a slightly smaller drive sprocket to the engine. This teeny steel star has 15 teeth instead of the previous model’s 16, but the transformation to the Ninja’s performance is striking. The bike now revs like a maniacal 400cc race bike and that means the power comes very quickly indeed. On a 1000cc superbike you’re blatting through the gears in a frenzy of revs, but on the 636 you can hold onto each gear for a couple of seconds longer and enjoy the music.

Don’t buy one and complain about the revvy nature – this is how a sporty middleweight should be, feeling like a piece of precision engineering in a way that no twin or triple ever does. I’d even suggest that the older generation of sports 600s were hamstrung by manufacturers trying to make them too road-friendly and gearing them to cruise at motorway speeds at low revs (and co-incidentally pass the roll-on noise test at the same point). Maybe Euro 4 and the exponential recent advances in fuelling and ignition technology has allowed Kawasaki to build the bike they always wanted (it certainly feels like the 600 that I always wanted), while passing all the emissions and noise regulations too.

The 2019 ZX-6R engine is structurally the same as the last major revamp in 2013. That’s no bad thing because it also means the reliability has been long-proven in hundreds of clubman, domestic and world championship races all over the planet. Which means you and me can rev the thingies off our ZX-6Rs all day knowing that a well-maintained engine will almost-never break.

And to be honest, most bike engines on sale these days can trace their lineage back further than 2013 too. The pace of development has slowed significantly in the last few years – it’s the electronics where the revolution has happened.

The ZX-6R’s performance is stunning…and flexible too. There’s a quickshifter fitted for upward changes (no autoblipper for going down), but on the road it’s fine and more consistent without it. The gearchanges are slick, accurate and precise. Neutral is easily found and the only benefit you’d get from a bigger bike is a little more thrust when you find yourself halfway through a misjudged overtake. 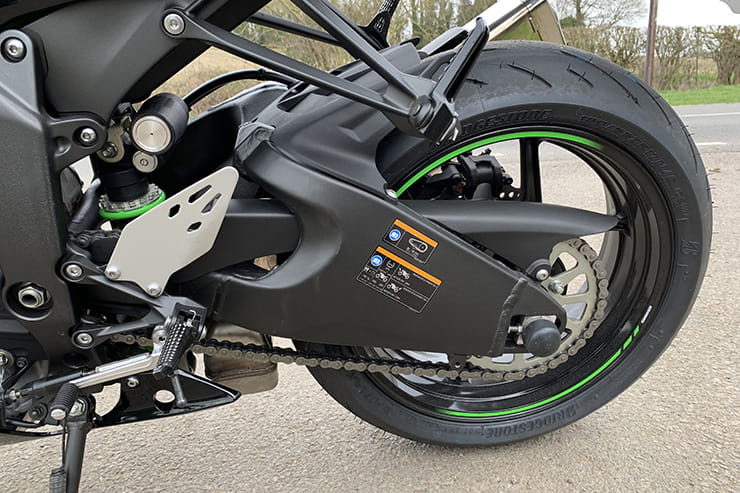 Quickshifter is standard for 2019, swing-arm looks like a one-off works race item

The flipside of that high-revving craziness is an appetite for fossil juice. Over the full test period our ZX-6R averaged 46mpg, which is slightly disappointing, given the sophistication of the electronics On a couple of rides it dropped into the 30s too. In mitigation it did spend most of the test period at 8000rpm-plus and we might have forgotten to do any cruising.

The chassis is also the same as the 2013 ZX-6R although the seat is narrower at the front and the tank is narrower at the rear, which makes it easier to get your feet on the floor. The revised suspension feels soft when you bounce up and down on it and the ride quality on bumpy roads is excellent.

But it also has superb control in corners, behaves predictably as you go on and off the brakes and doesn’t do anything unexpected. It doesn’t need a steering damper except for the occasional moment when it suddenly does and, as with most good sports bikes you spend the whole ride feeling inadequate and convinced you could have done those corners considerably quicker.

Everything is better than the last 600 you rode. Everything is easy. Simple, well considered engineering with smart ergonomics. Just feel for the side stand or indicators or gear-lever or clutch or back brake and it’s there. Sounds easy, but you’d be surprised how many bikes get this stuff wrong.

It takes six hours and 13 minutes on the longest day’s riding before my bum aches. Unfortunately, my wrists feel like they’ve been slammed in a door for three hours non-stop and the final two remaining neck muscles were severed when I forgot that you can’t do a lifesaver on a bike with a (Ninja) turtle-inspired riding position wearing zip-together kit.

The screen is too low and not very effective but there’s room on the seat to move your bum a long way back if you feel the need to try a racing crouch on the A617. The new fairing looks sharp but mostly exists as somewhere to put your sponsors’ stickers. Mirrors are mediocre, despite having stalks long enough to pick up Australian telly, but, thankfully it’s rare to have there something behind you that isn’t going backwards. 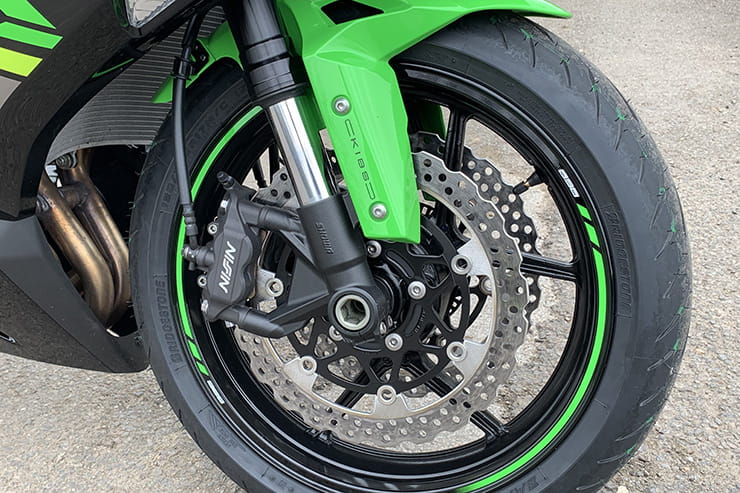 Plenty of power, plenty of feel and some clever ABS electronics too

Radial mounted Nissin calipers have immense power but plenty of feel too. Kawasaki’s Intelligent Braking System (KIBS) links with the ECU to manage braking performance according to the revs, throttle position and gear selected. In practice it means the system can detect the difference between banzai track braking where ABS can be a handicap and a locked wheel on a slippery road. It also means that the pressure drop when ABS is activated is less than on some systems.

In practice what you notice is an ABS system that controls braking to a point where rear-wheel lift is reduced under heavy braking and the rear ABS doesn’t chatter in and out as it does on some systems. 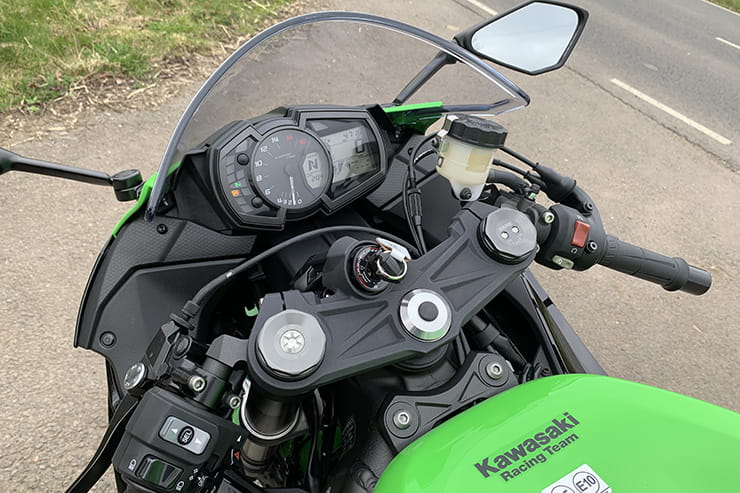 Simple, easy to read clocks, intuitive control of riding modes via lhs switchgear, all it needs is heated grips for chilly April mornings

A fuel gauge and gear indicator are new for this year in the new dash which is dominated by the analogue rev counter. Kawasaki’s ignition immobiliser is also fitted and the riding modes, and information displays are accessed easily through a rocker switch on the left handlebar.

Lighting is now LED and there’s a quickshifter (upchanges only, there’s no autoblipper for downshifts) as standard and the clutch lever is now span adjustable.

You’ll need to give your muscles and reflexes time to remember what a sports bike felt like, but muscles will stretch and it becomes less painful quicker than you’d think.

Riding a ZX-6R can feel like hard work, but that’s not necessarily a bad thing. It’s a hugely rewarding bike to ride and, for the price represents phenomenal value for money.

Sadly, the used market for Japanese supersport bikes is small, meaning residual values can be low and this has a depressing effect on PCP deals.

I finished the test wanting a ZX-6R, because I love the crazy engine and in my world it’s as pretty as the latest Fireblade and Ducati V4 for a fraction of the price. I’ll never be good enough to get the most from the chassis and I know there are other bikes that will go faster and be more comfy and easier to ride. But…but…but…there’s something about a mid-sized, buzzy four-cylinder motor that squeezes my ‘gotta-have-one’ gland. And when a motor like that is fitted in a bike as pretty as this, all that sensible stuff matters a lot less. 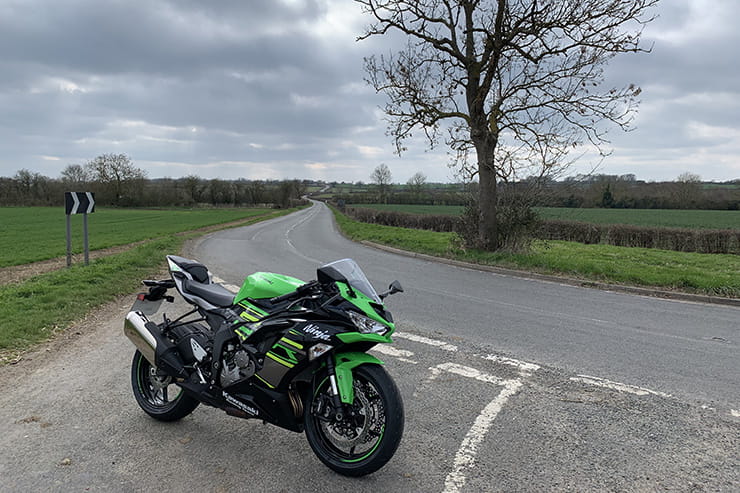 Britain’s b-roads are in for a noisy summer