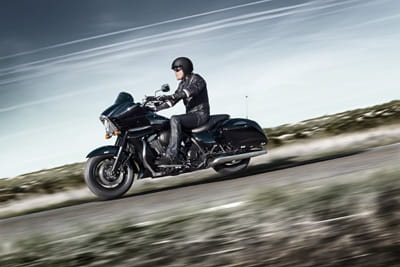 Custom cruisers are slowly rising in popularity with the increase in the average age of the motorcyclist. Gaining bigger appreciative looks and more deposits are touring custom cruisers. The reason for this is plainly obvious when you get to grips with one. They are supremely comfortable and have greater carrying capacity than a builder’s lunch bag.

Kawasaki’s VN 1700 should not be thought of as the poor man’s alternative to a Harley-Davidson. The fact that the VN – and most other Japanese cruisers – are basically Harley copies is neither here nor there. The VN is a good bike in its own right.

Starting with the engine, the VN’s 1700cc mass admirably succeeds in delivering the old school charm of an air-cooled engine except it is liquid-cooled. This is a good thing because it reduces the amount of heat to reach the rider in slow moving traffic. Remember, that all-encompassing fairing doesn’t allow much of an airflow to get through and cool the rider and pillion hence adjustable airflaps on the fairing.

The engine shudders briefly on pull away in defiance of hauling 400kg from a dead start, but then the thumping hammer of 100ft lb of torque quickly takes hold to smoothly push the VN forwards and onwards. Albeit at a subdued pace because the VN lacks that urgent drive that is sometimes needed when pulling from a junction or playing catch up with the gang.

Filling the pillion seat and the 126 litres of carrying space makes little difference to cruising speed. Although the engine will occasionally need the gearbox stirring to make a hurried overtake because sixth gear is an overdrive gear to calm engine revs and reduce petrol consumption.

Take our word for it the VN1700 Tourer is the two-wheeled version of a luxury saloon car. It needs to be if you plan to run distance or make use of the 20-litre fuel tank capacity. Taller riders will find screen turbulence annoying but not to the point where you want to smash it – at the legal 70mph limit it is bearable.

What you will find with the VN1700 Tourer is a specification list that shames the price of some competitor bikes. ABS with automatic braking distribution? Tick. An iPod compatible/radio stereo system? Tick. Crash bars? Tick. Lockable panniers and top box? Tick. Cruise control? Tick. More than one reason to buy? Double tick.