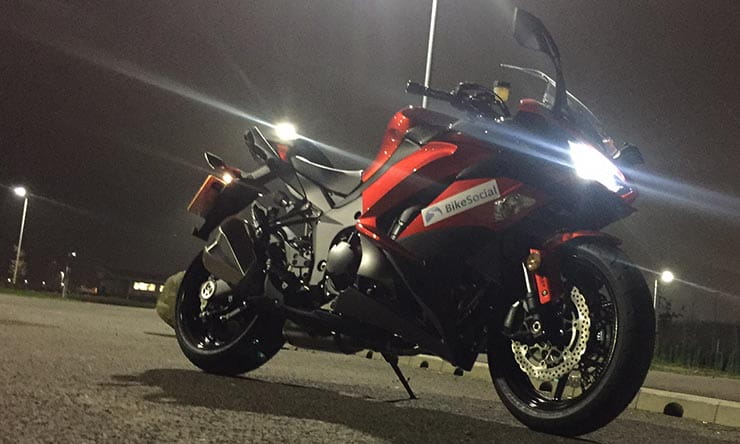 Since being introduced to the Kawasaki range in 2011, the Z1000SX has carved out a loyal following . The 2017 model is in dealerships now and, not only that, they are selling fast. With a price tag of £9,995 it’s not the cheapest bike in its class but it sits well against other bikes that profess to have a sports touring personality, so we borrowed one for the day to see how the latest nips and tucks fare when out in the real world.

The ambient temperature is two degrees and it is fast approaching sunset on a grey January afternoon in Peterborough. I know it’s only two degrees because the 2017 SX comes with many revisions over the outgoing model; an onboard temperature gauge is just one of them. I remind myself that when I rode the 2016 version back in the summer the temperature was around 20 degrees. What a difference six months makes.

I let the bike warm up. This is a demo bike that’s only covered 100 miles and everything is brand spanking new. I feel guilty knowing that when I return it won’t be so spick and span, but I have no issues about how the SX will look after me. The roads in January can be greasy and damp, and the thought of taking something out with more sports focus would be a waste of fuel.

Talking of fuel, I head straight to the nearest garage. The various displays are highlighting that the tank is dry, I can just about hear some fuel inside the 19 litre tank so take the gamble to creep to the petrol station. I manage to cram just over 19 litres inside the burnt orange tank. It looks like it’s made from plastic but shaking off the pump confirms that it’s metal. Of the three colour schemes available, this orange offering is actually my favourite. The other two paint options are metallic black and candy lime green. It is, after all, a Kawasaki.

With the trip set to zero and 21 quid worth of unleaded between my thighs, I set off.

I had picked the bike up late in the day because I wanted to check out the new LED headlights, which Kawasaki claim are an improvement over the ones on the old model. I ride every day and poor headlights really impact on both my fun and my safety. With the oven crunchy brigade all leaving their desks at the stroke of 5pm, Peterborough’s parkways quickly resemble a car park, so I head home for a cheeky cuppa, taking a few minutes to look around the bike while the kettle boiled.

Under the strip lights of my garage I struggled to see what changes Kawasaki had made from last year’s bike. This wasn’t down to the dim lights in my garage but more to do with the subtlety of the changes Kawasaki have made. The bodywork is the main difference. The nose of the bike looks much sleeker and part of me thinks that it’s inspired by the Kawasaki H2. Then from another angle I get hints of the Versys, but either way it looks OK in my book. The screen is adjustable by way of a catch that sits beneath the clocks. It’s not hi tech and looks more like a bonnet catch from a Ford Focus, but it works. The mirrors are very wide and work well and the reshaped headlight incorporates new LED bulbs. With my cuppa consumed I ventured out to see if they are a bright idea?

After 60 night miles I can confirm that they are not a dim idea. The spread of piercing white light made my progress along both the A1 and the twisty lanes of Cambridgeshire a pleasure. Less positive is the brightness of the clocks. The reworked display is very dull and there’s lots of information at your disposal, including a gear indicator, which is new for the 2017 model. The shift light is annoying and the combination of electronic settings offered by the left hand select switch is baffling. That said, I never once felt uncomfortable in those 60 miles. For 2017, the SX gets a new seat and there’s even a lumber support pad. At 815mm the seat height is bordering on adventure bike territory and the rear pad sits even higher, requiring a decent swing of your leg to get on and off.

Having stuck 60 miles on the dials I was keen to get through the rest of my petrol. After a night’s sleep I grabbed the key to the SX and ventured off again. Riding in January isn’t that much fun, that’s probably why I only saw four other bikes out during my test. I was keen to hit the lanes of Lincolnshire and set off. My idea wasn’t one of my best ones as the farming community are like rust, they never sleep. I encountered mile after mile of damp muddy roads, not ideal when you’re riding a bike that weighs in at 235 kilos and presents 140bhp to the fat 190 section rear tyre.

The Kawasaki is fitted with a variety of rider aids and the acronyms come thick and fast, from KTRC to IMU, each one there to make things safer. The only set of letters that I fully understood was ABS, which is now standard on the SX. The anchors up front are monobloc four potters that mount from the 41mm inverted forks. These bite on to 300mm discs and Kawasaki have stuck with the petal design of their brake rotors. Euro4 is also responsible for reworked silencers and a cleaner injection system, each helping the 1043cc engine jump through the emission hoops.

Having ridden the 2016 model I can confirm that these tweaks have robbed the Zed of its exhaust tone, thankfully though none of those 140 galloping horses have ended up in the knacker’s yard. The big Zed is seriously comfy, while the big bhp figure keeps the sports side of the brief happy. The pegs, bars and that buttock friendly saddle make sure that the touring box is firmly ticked too. The adjustable screen isn’t just a salesman’s patter; it works well and keeps endless drizzle and rain out of my way. Also, those 235 kilos help to keep the 1440 mm wheelbase planted when on the wick gets wound up. The gearbox is slick, there are no nasty noises on the up or down change, and the clutch is featherlight – it feels like an hydraulic clutch but is instead operated by a good old fashioned cable. First gear will give you 68mph if you pin it until the 11,000 rpm redline. Then the electronics kick in and you start going slower until you flick it up a gear. This bike will embarrass sportier machines. Off the mark, there’s no step up in power, it’s just a turbine smooth progression, nice. Stopping for a cuppa allowed me to look around the bike again. Sadly it was now under a layer of grime.

The rear side handles have been reworked to allow easier fitment of luggage. It might be a dark day in mid winter but that candy burnt orange paint on the Z1000SX really helped to brighten it up, so back onboard I hopped to get through the rest of my unleaded. I set the clocks to tell me my range. It was giving me 60 odd miles to go so I headed south on the A1 from the county of Rutland. Spirited riding quickly got the digits tumbling, and when I hit 37 miles to go the last fuel block started flashing. I wanted to get back but also use up the fuel, but with 20 miles left on the range the estimated figure vanished! I had just over 150 miles up on the trip and pointed the Zed back to Wheels, the Kawasaki dealership to which the SX belonged. I arrived with a grand total of 158 miles from my 19 litres of gas, and shaking the tank revealed it was pretty damn empty.

The reworked Z1000SX is one of those bikes that you could easily overlook. If you’re after a Sunday afternoon trinket then keep looking. This is a motorcycle for not just every day of the week, but also for every day of the year!

Thanks to Wheels Motorcycles of Peterborough for the loan of the Z1000SX. 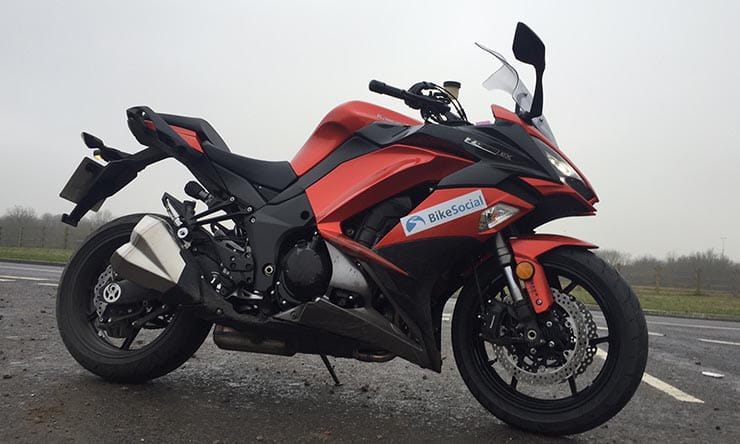