“The sound…its sound was incredible, unique, marvellous. Nobody had heard this sound before. I think it is the nicest sound ever produced by a racing engine.”

‘Legend’ and ‘icon’ are overused words. But the Honda RC165, aka the ‘Six’ is legendary and it is iconic. And at the 2017 Classic TT, along with a string of other classic dates, the original Honda ‘Six’ has made a very special appearance alongside the only two surviving members of the original team to have ridden it: Stuart Graham and Jim Redman.

Indeed the ‘Six’ was ambitious even in its conception. Never before had a motorcycle been built with six cylinders, an engineering feat that most mechanics dismissed as fantasy.

But Honda was determined and had invested fortunes of its income into research and development with dozens of engineers competing to improve the marque’s 250cc, four-cylinder machine. It needed to compete against the increasing prowess of the two stroke machines that were starting to dominate the podiums of European GP rounds. For Honda, failure was not an option and so Sochiro Honda’s development team threw everything into creating one of the most exotic machines in motorsport history.

In February 1964, the first sketches were made of the ‘Six’ and by August of that year the first prototype had been assembled. Its rider-cum-guinea pig was Jim Redman who - at 85 years-old — remembers his first encounter with the ‘Six’ well: “I got to Japan and Sochiro Honda was very hands-on and he liked the motorbikes very short, much too short for my liking so when I got there there was this tiny little bike, much smaller than it is now, and it had a little frame and I went round on a couple of laps and came back and said 'I need about three more inches on the swinging arm' and (Honda’s then chief mechanic) Aika-San said: ‘I knew you'd say that but Mr. Honda wanted it like this’.”

Aika-San eventually gave-in to Redman’s request and turned the front forks around to add another couple of inches. 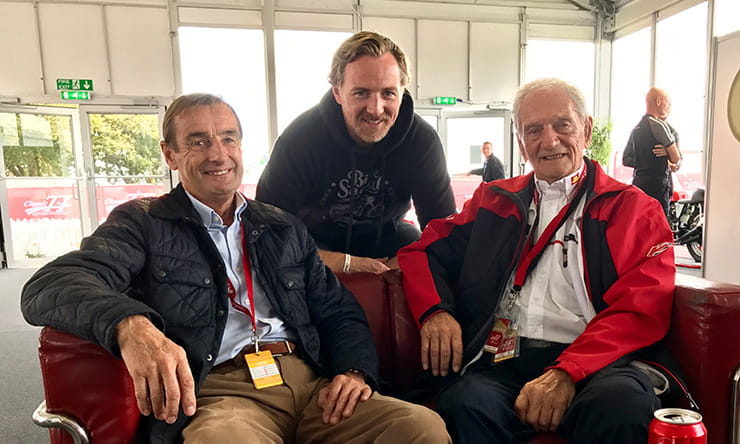 Above: Graham, Mann, Redman. Two are very good motorcyclists, the other is a dreamer.

But the clock was ticking. And the season was passing. “There was only Monza and Suzuka left,” says Redman, who had flown to Japan straight from the Finnish GP that week. “I got there the Tuesday morning and Monza was at the weekend so we didn't have much time. I spent Tuesday and Wednesday morning on the track and I said: "Okay, I can do it so let's get to the airport.’

Unfortunately, Sochiro Honda didn’t share Redman’s enthusiasm. “He said 'no, we're not going to do it. The bike's not right, Jim's not right, he's not happy with it and he's going to hurt himself so we're not going to go to Monza." But I pleaded with him and said: ‘It’s only five corners, I can walk around the corners and blast this thing down the straights and still win.’

Sochiro Honda agreed. But that was only the first of many hurdles…

“So we got to the airport,” says Redman, “but the staff couldn’t guarantee that the bike would be on our plane so after a fight we paid for three seats and took the seats out. I put the bike in the cabin and arrived at Monza with my carry-on luggage pushing it down the steps 'bump, bump. bump.”

He said: “I then got to customs and I thought 'I'm never going to get through here' and they said, 'Hey Redman, they're practicing already, so you'd better get to the track' and I said, 'what about the paperwork?' and they said, 'come back on Monday, get to the race'. Only in Italy could that happen.”

But the Honda ‘Six’ was still a secret at this point. It’s signature six-cylinders were kept under wraps - well, a blanket, to be specific - as Honda didn’t have time to prepare the machine’s registration papers. Thus, the bike was registered as the 3RC164 - as if it was the third evolution of the four-cylinder 250cc RC164. This code was further confusing because Honda’s ‘RC’ codes usually marked the following season, so that machines built in 1963 for the 1964 season would be named ‘RC164’. The fact the ‘Six’ - which was primarily built for the ’65 season - was initially named the ‘3RC164’ certainly put competitors off the six-cylinder scent.

To further confuse things, Honda started referring to the ‘Six’ as the RC165 - thus maintaining the mystery - and no doubt baffling its staff.

But adopting a misleading name wasn’t enough for Honda. Its engineers also removed two of the four pipes so that no-one would guess this was a machine with six cylinders. The motorcycle was shrouded and guarded in the Monza garage - even behind locked doors - until the time came to go on track. Only then were its two extra exhausts added. 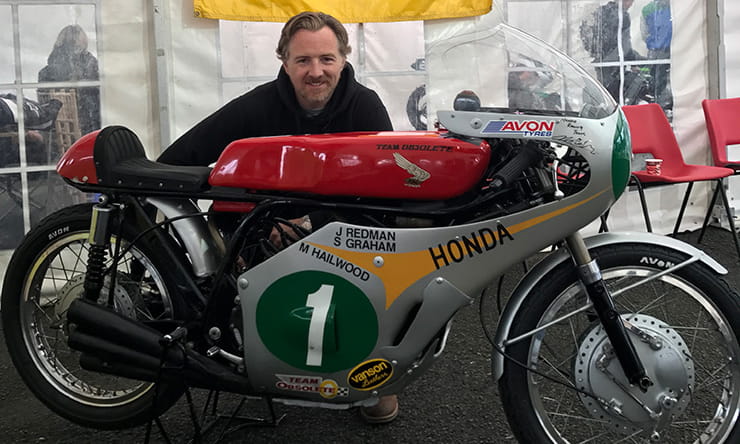 Phil Read, in his book, Prince of Speed, said: “Racing has always been full of fairy tales, and most of them are about multi-cylinder machines. So, when somebody gave me the tip-off during practice at Monza that there was a Honda in Redman’s garage with six pipes sticking out of its back-end, I politely told them I was in no mood for funny stories.”

Of course, by the time the machine’s six megaphones roared their distinctive scream in the paddock on September 24th, 1964, it was clear that this was no ‘funny story.’

Speaking of that day Aika said: “The sound…its sound was incredible, unique, marvelous. Nobody had heard this sound before. I think it is the nicest sound ever produced by a racing engine.”

Redman remembers his first race on the ‘Six’ vividly: “I made a big mistake at Monza, I didn't push it hard enough and then on race day it overheated because it was a scorching day. It faded at the end but I was winning it easily but sadly I finished third. It was going but only on five cylinders and it was very hard to not keep trying for more. But in the end Mike Duff (now Michelle Duff) caught me.”

Mike Hailwood was their final choice. However, the British rider was contracted to MV Agusta until the last 350cc race of the 1965 season, which was at Suzuka.

Honda persuaded the organisers to push the 250cc race to the end of the day to snap-up Hailwood as soon as he was contractually free. The plan worked a treat: Hailwood won the 250cc race on the ‘Six’ despite the fact he described the machine as ‘bloody awful’. He said: “How Jim could have ridden this thing for one year without complaining? Redman is not only a top rider, to live with the Honda Six he had to be a hero.”

But for the forthcoming season Redman was ruled out of racing after a crash in the pouring rain at the Belgian GP. Honda needed a second rider. Fast. So in-stepped Cheshire privateer Stuart Graham, whose late father, Les Graham, was 1949 500cc world champion and a successful TT racer. Graham said: “Honda needed some assistance for poor Mike. They were running in the 50, 125, 250, 350 and 500cc world championships so there was a lot going on so they needed somebody who could at least help out and try and gain a few points. I'd finished second in the 500cc race to Ago on my private Matchless and I was getting some pretty good results in that championship in my first year of GPs. In fact, after the Belgian GP I was officially third in the 500cc world championship on a private Matchless in my first season.”

“I was approached by Honda at the next round in East Germany at the old Sachsenring and it was really out of the blue although Jim had made some flippant suggestion to Mike that I should help him out while he was lying on his hospital bed but I put that down to the fact he was too full of morphine!”

In fact, it wasn’t the opiates…

“They said 'we want you to come and we were going to talk to you at the end of the year about joining the team anyway so we are just bringing it forward. We'd like you to ride our 250cc six-cylinder machine, would you like to do that?' It was a simple question in that I was a young privateer living from hand to mouth and when the factory Honda team are asking you to ride - especially the Honda Six - you don't really hesitate.”

It was a baptism of fire, as Graham explains: “I was literally plonked on this bike and the worst problem was that there it's not easy to keep the engine running. It only works at very high revs. I was asked to learn the rather daunting Sachsenring circuit on this six cylinder Honda. And of course I hadn't had a lot of briefing apart from 'keep the revs there' take it and ‘off you go.”

But the problems didn’t end there.

“They also forgot to mention that the gearbox was seven speed but it had about seven neutrals and if you didn't get the down-change spot on it the engine would die. Of course, it instantly did that at the most inopportune moment through a quick corner and I scared myself silly, came in and finally I said to Mike 'the gearbox is a box of neutrals' and he said, 'oh yeah, they do that, didn't they tell you?”

“It was a very wonderful experience and it set me on my way as a factory rider in the world championships. And what an amazing start to my professional career! “

He said: “Jim and I are - sadly - the only survivors of the original team in period and we still have wonderful memories.”

Indeed, to see Graham and Redman reunited with the very machine that revolutionised racing technology, is a very special sight.

“Frankly this is the most iconic Grand Prix bike ever made. And people still have difficulty in getting their head around the fact that this thing has six cylinders and yet it's so tiny you wouldn't believe it.”

With its secretive past, its enshrouded launch at Monza and its sheer power, the Honda RC165 is in the strictest sense of the word, a legend. And with its six-cylinders, its decibel-busting megaphones and its dainty frame, it is an icon of motorcycle design.

At least with the Honda ‘Six’, those two grossly-overused words: legendary and iconic - are entirely appropriate.