Ready To Race? Bike Social does the KTM RC390 Cup 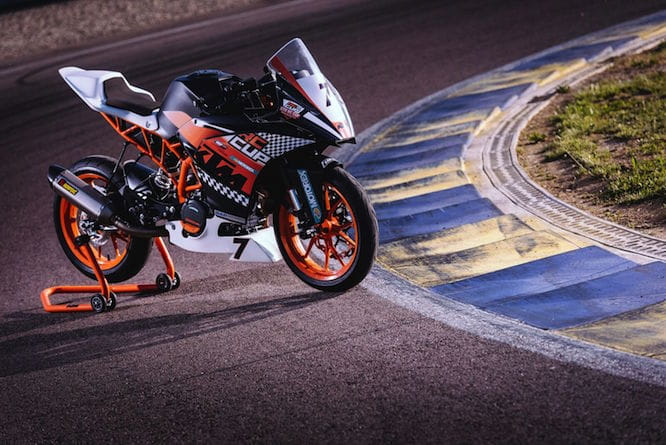 If you watched British Superbikes last year, there’s a good chance that you caught a glimpse of the KTM RC390 Cup.

New in the UK last year, the cup is aimed at giving kids as young as 13-years-old an opportunity to get into bike racing at a very reasonable price. While British grids were on the whole rather sparse, some of the racing was of the top drawer – particularly the end of season World Cup at Silverstone, which brought together the top teens from the various national cups to fight out a thriller at the famous MotoGP circuit.

Which is why I am here, at the Modena circuit in northern Italy, making my ‘race’ debut on a cup prepped RC390.

KTM’s attitude to motorcycling is a breath of fresh air in today’s litigious times. They’ve invited 18 journalists from around the world to try out the cup experience for themselves and although we most definitely are not here to race (it’s a challenge - wink, wink), their motto ‘Ready To Race’ is mentioned at every opportunity during the presentation. What's more, something definitely resembling trophies are sitting splendidly in the corner. We’re given transponders to record our lap times in the qualifying, I mean free practice, sessions and without as much as a ‘here’s the way around the track’ it’s on to pit lane and straight into qualifying, I mean testing…

Still, I know that my chances of winning this 'race' are pretty slim when I look to my right and see one of the French journos, Arnaud, mounting his RC390. He looks pretty familiar and clearly knows what he’s doing. Turns out that 14 years ago he was winning the 125cc world championship. I’m an insurance bloke that rides a C90 to the office every day. Yikes! 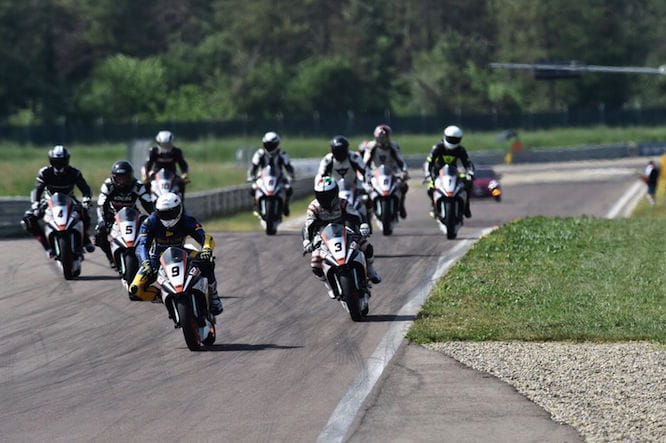 To be honest, I think that spooked me a bit. Those first 20 minutes were among the scariest of my life. It’s hard to describe all the emotions going through my head: trying to learn the track and trying to learn the bike, not to mention doing my best to remember that the Cup bike uses a race configuration gearchange (one up, five down).

Unsurprisingly I was stone cold last, with our French ringer overtaking me at least three times (and usually sideways) in the 20 minute session. It turns out that I am not Britain’s great undiscovered race talent. Shame that.

KTM reckon that the RC390 provides young riders with a route into Moto3. Top riders in the championship are given the opportunity to try out for the (KTM powered) Red Bull MotoGP Rookies Cup, with the winner from that series often in the hot seat to take a factory KTM ride in Moto3. American rider Sean Kelly has made the step from the RC390 series to riding the proper RC250R race bike in the Rookies this year, so it will be interesting to see how he fares.

The KTM Cup bikes are modified versions of the standard RC390, the bike that was quickest around the track in our sub-400cc sportsbike shootout last summer. The standard RC390 is a beautiful little thing, although the basic suspension is exposed when taken on track. There are no such problems with the cup bike. The bouncy standard rear shock has been replaced with a full race rear unit from KTM-owned WP, while the front is claimed to be exactly the same as the forks used in the Red Bull Rookies, with riders able to change the spring rates to fit their individual needs and style.

Otherwise most of the changes are aimed at junking the road gear, such as lights and the ABS, as well as changing the screen, exhaust and footpegs. That saves around nine kilos over the road bike, although power has been restricted to 38bhp, down from 44bhp, by a mechanical restrictor in the throttle bodies. This change was made at the request of race governing bodies such as the ACU and their German equivalents, who felt that putting 13 year olds on anything more powerful would be too big a jump for inexperienced riders. 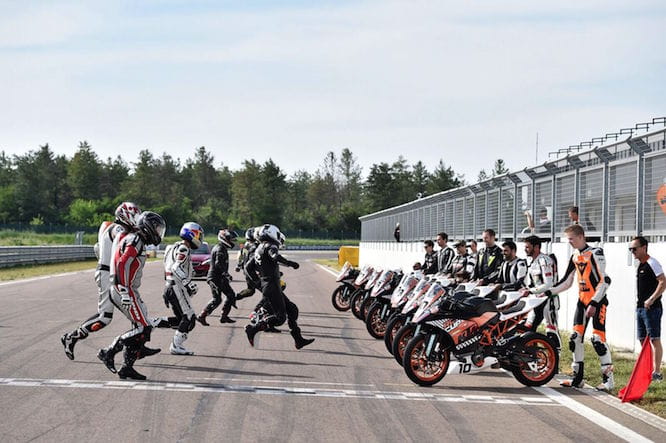 After the abject disaster of my first session, I was immediately able to chop seven seconds from my lap time next time out. I certainly wasn’t fast, but I was much less tense and much, much smoother. Rather than wondering where to go, I was in a rhythm. Brake here, down one there. Turn in, get on the gas. KTM ambassador and all-round top bloke Jeremy McWilliams warned us that the limitation on the bikes is the road orientated Pirelli Diablo Rosso Corsa II tyres, but in my feeble hands they prove more than capable and the rear silencer touched down a few times. UK spec race bikes, incidentally, use Metzeler’s stickier Sportec M7RR.

For the afternoon’s 10 lap race-not-race, why 'qualifying' time ensured that I didn’t have to worry about being taken out from behind at the first corner. Back of the grid or not, it was quite an unbelievable experience to line up and wait for the lights to go out. I’ve always wondered why backmarkers bother trundling around adrift of the field, but now I get it. For a few laps I kept the group in front of me in sight. My riding improved and I put in my best laps of the day, albeit a still paltry 1:34. That was 12 seconds off the pace of Arnaud and co, but 10 seconds quicker than my opening session. However, as the guys in front edged away, so my own performance dropped off too. My concentration went and I made mistakes, the flow went, the wrong way ‘round gearbox caught me out and my lap times increased.

After the ignominy of the top three lapping me on the penultimate lap, I was suddenly back in the zone. I followed, for a few corners at least, and had another target to aim at. Even though I hadn’t troubled the leaders, it was still one of the best experiences of my life. I had still been involved in a race. I am now a racer. Just not a very fast one! 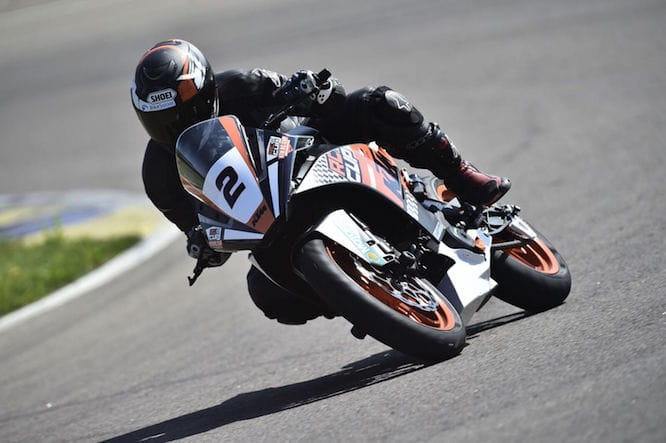 What I now have is the utter respect for anyone who races. The next time I see kid 20 seconds off the pace in the RC Cup I shall doff my cap to him and smile. He may not be challenging for the podium or a Moto3 slot, but he’s still running his own race and fair play to that.

Sadly, I don’t expect to get a call up to the Red Bull Rookies any time soon. But my day on the RC390 has made me want to take further track training and improve my riding. Following better riders has made me see how I can improve my lines and braking markers, but I still have a lot to do to improve my body position on the bike.

Grids have been a bit sparse and racing somewhat spread out in the British RC390 Cup, with just 15 bikes starting the opening round of the 2016 series at Silverstone. However the little bikes can provide truly amazing racing, as anyone who witnessed 2015’s end of season ‘World Cup’ at the same venue will know. With racing never seen on British tarmac since the days of the old Pro-Am, the 15 points scorers were covered by less than two seconds as they took the chequered flag. This year’s final is due to take place alongside the BSB round at Assen in October and promises more of the same. Make sure you tune in. It should be monumental. 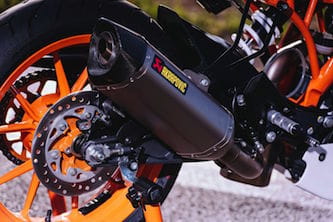 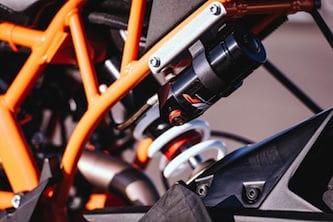 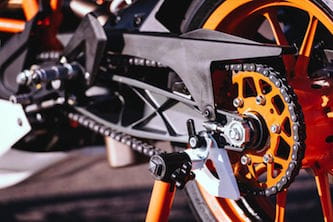 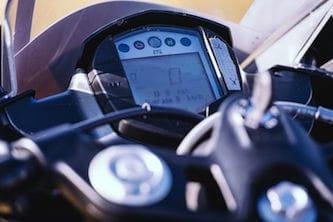 KTM claims to have built over 500 RC390 racers and with a season of UK RC390 Cup racing coming in at around £13,000 (including the cost of the bike) there are few cheaper ways of getting into racing.

If only they would let grown ups take part too.