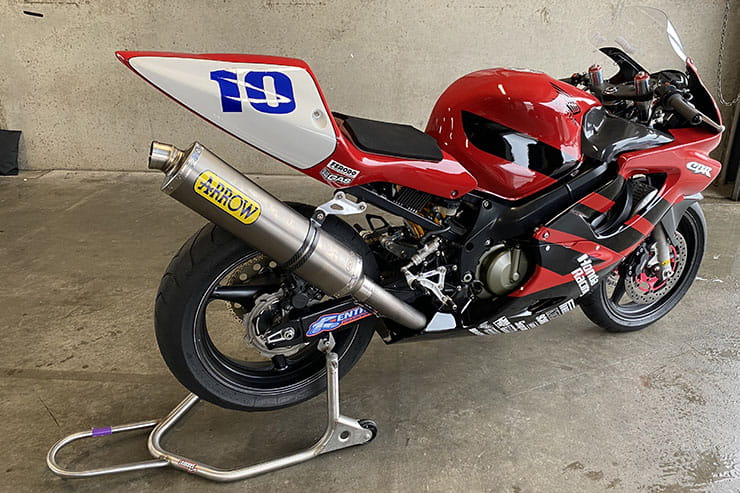 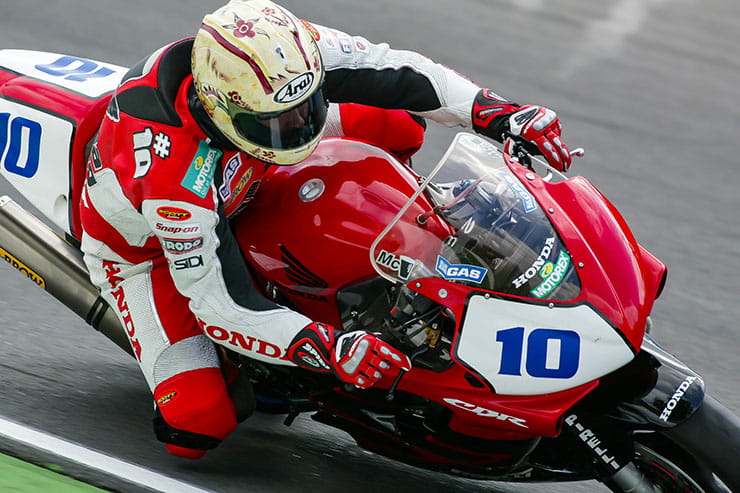 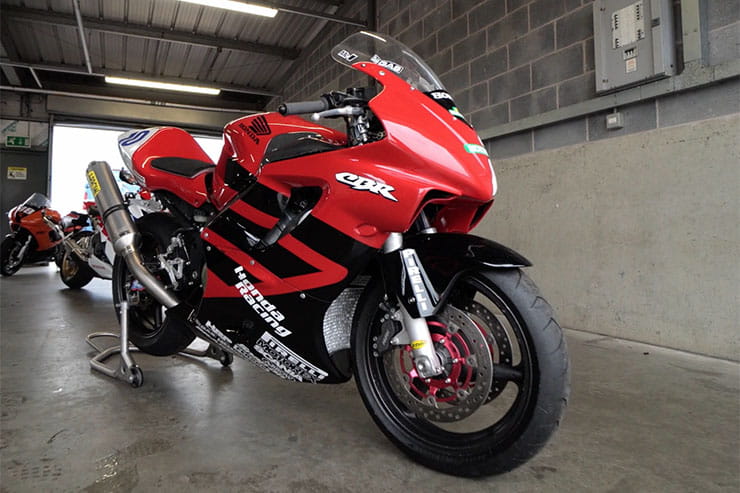 I’m sure sheltering in a Donington Park pit garage during a typically wet track day has been an all-too common an occurrence during the early part of this British summer, but it allowed me to nose around a certain red Honda CBR600. It stands out for its condition; gleaming and immaculate. That’s because this is no ordinary supersports motorcycle. It belongs to 23-times TT winning and Bennetts-sponsored, John ‘The Morecambe Missile’ McGuinness MBE.

Having originally belonged to the late Simon Andrews, a close friend of the McGuinness family, and then to a mate of John’s from a neighbouring village, the bike seemed destined to end up in his archive, “I’ve got 60-odd bikes in my bike collection so it’s nice to have this one, with it being Simon’s and with it being a Red Piranha bike it’s nice to have it, it’s a replica of part of my racing journey in ’02” said the 49-year old.

A racing journey that many forget included his one year in the World Supersport Championship back in 2002.

Having taken the 2001 British championship fight down to the final race at Donington Park against Karl Harris on his Suzuki, McGuinness on his Castrol Honda blew up going down Craner Curves and that was that, but he did enough to stay with the team who moved into Word Supersport. 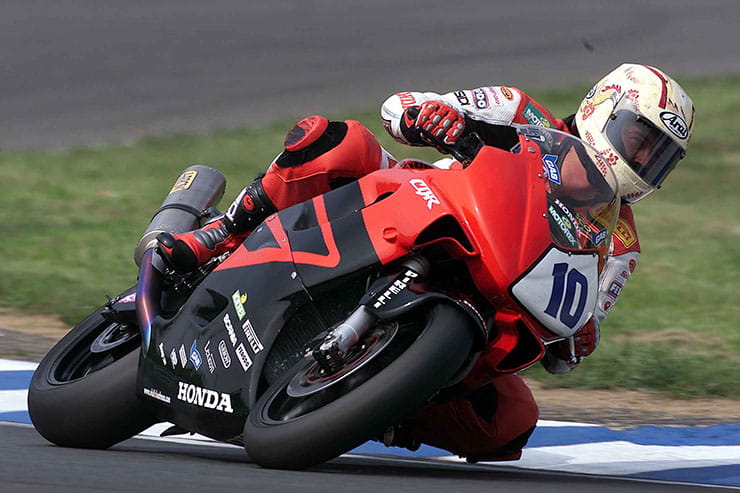 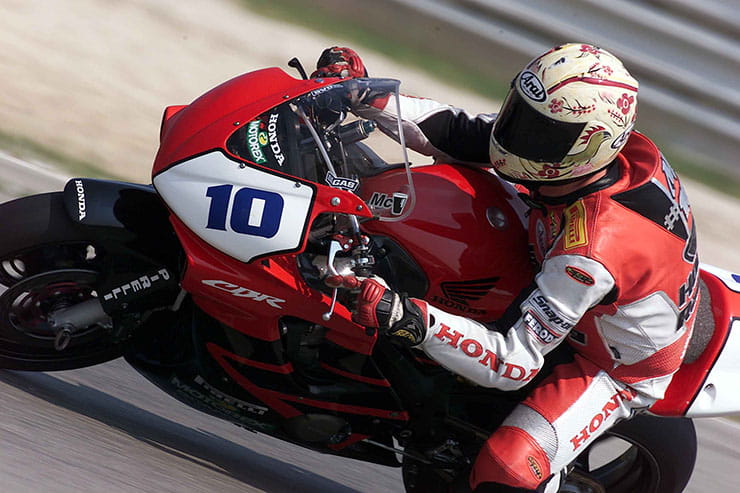 ABOVE: from 2002 with a young McGuinness in World SSP

And this CBR replicates the 2002 McGuinness Red Piranha racer that he and his son Ewan spent lockdown stripping it and turning it into. John recalls, “It belonged to a chap called Ian Holt from the next village near me, a bike collector who’s supported a few riders over the year, including Bruce Anstey when he first came over, as well as a few enduro riders. He manages Billy Bolt (World Super Enduro Champion). I saw this bike in the corner and we did a deal.”

Despite his on track and road racing successes, the 2002 season was a flop from the start. “It wasn’t the greatest year! I went to Croft to do some filming with BBC, and I crashed a 954 Fireblade and broke my collarbone then went to Kyalami in South Africa and got Pneumonia, I’d taken it with me then spent five days in hospital there, so that was a bum deal”.

He continued, “Then breakdowns and learning new circuits… imagine going to Monza and trying to learn the circuit in 40 minutes! At the time World Supersport was epic, the depth of field was unbelievable, there was factory Suzukis, Yamahas, Ducati, Whitham was in there winning races. I was there or there abouts, I was also just outside the points and bashing my head against the wall, couldn’t really get to grips with it, trying to learn Assen, Monza, and all these circuits. I scored a few points here and there and my best result was at Oschersleben would you believe, a 14th there and I scored points at the British Grand Prix.”

“The best Hondas at the time were the Ten Kate Hondas, they seemed to have it covered. We seemed to be a little bit behind. My teammate at the time, Karl Muggeridge, was a bit of a diva at the time, he’d come in the garage and throw the helmet and there’d be another Suomy helmet written off in the corner of the garage. It was hard, everyone was trying but we just didn’t get anywhere with it. It was a tough year, if you go down the list you’ve got Whitham, Casoli, Chambon, Teuchert, the German Yamaha team, MacPherson on the factory Kawasaki team, Ellison was in there, Fabien Forêt… it just went on and on! I remember being 1.8s off pole at Monza and I was last, the entire grid was covered by 1.8s.”

“I tried and tried; it took me a while to get over that Pneumonia. I got off the bike at Monza, jumped in the camper and drove straight to the NW200. Got off the bike Sunday night and I was practising for the North West on the Tuesday, so I was getting dragged from pillar to post. I went to the TT and was dicing for the lead with Jim Moodie, and it broke down at the end of the Cronk-y-voddy straight, I had a real big, frightening moment and my confidence was shattered. It took me a while to get over it.” 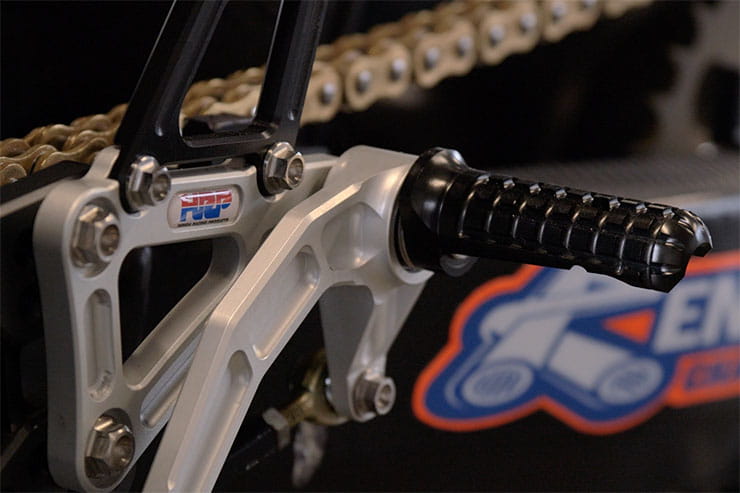 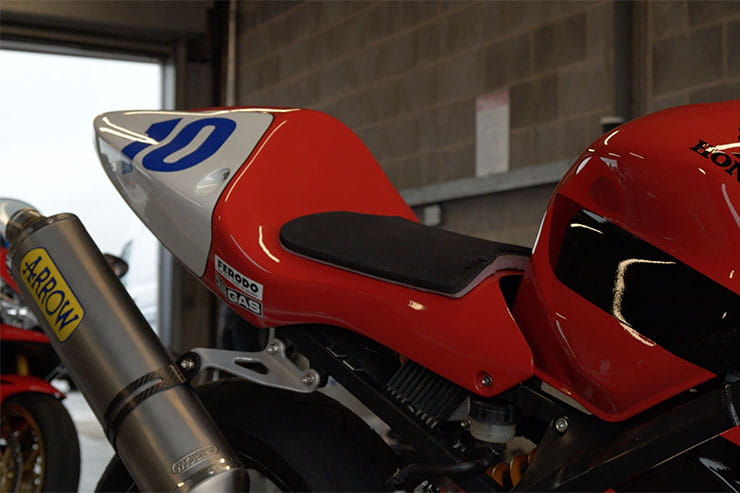 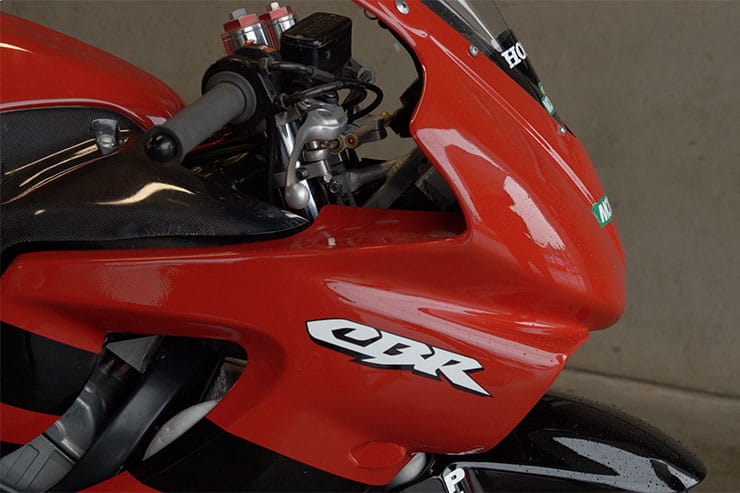 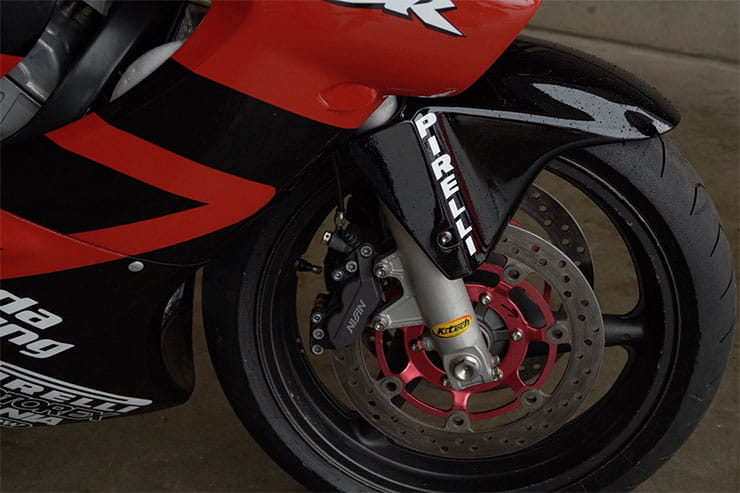 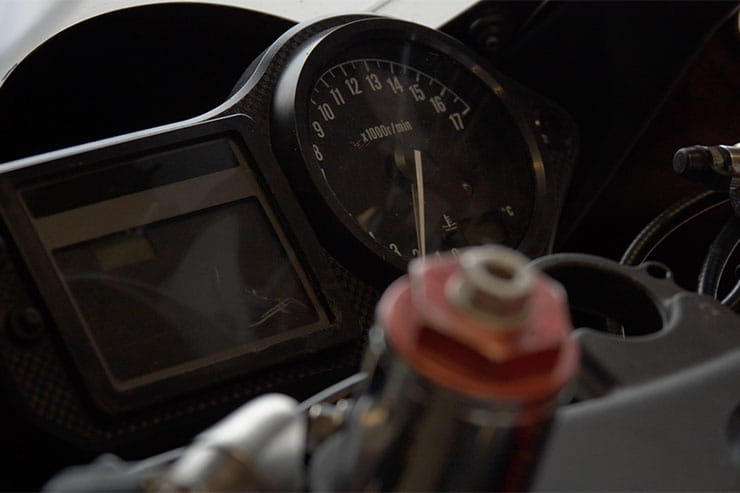 It's all in the detail

“I saw the bike at my mates place, and it’s got the right suspension. The K-Tech suspension, the really early K-Tech suspension which in 2001 was new technology, it’s got all the right bits, all the Honda kit parts; oil cooler, radiator, the kit ACG generators, the covers, the subframe, where the battery mounts, it was all kit, how we had it.”

But… it didn’t have the correct footrest hangers, and the ones John wanted were not going to be easy to find. So, who does he call?

“I picked up the ‘phone to Clive Padgett and said, “I need a set of HRP hangers, I’ll never get a pair of them, where are we going to find a pair of them?” Clive said, “Leave it with me.” Two days later a pair of these HRP footrest hangers turned up, they are a work of art. They’re full solid billet. When I raced it had a black anodised main plate and silver back plate. It was epic and just meant to be. This brand-new Arrow exhaust, it was in a box and they’re like rocking horse manure! It had a Micron on it.

“Me and Ewan rubbed the clutch over down, painted that. Painted the ACG cover. I prepped all the bodywork, rubbed it down, primed that. A good mate of mine painted it, lacquered it to get all the right stickers on the fairing of the sponsors. To get them all there, to get them all right…I’m a bit of a perfectionist. And that’s how it was. It’s got the kit discs on, the kit oil cooler, kit radiator.” 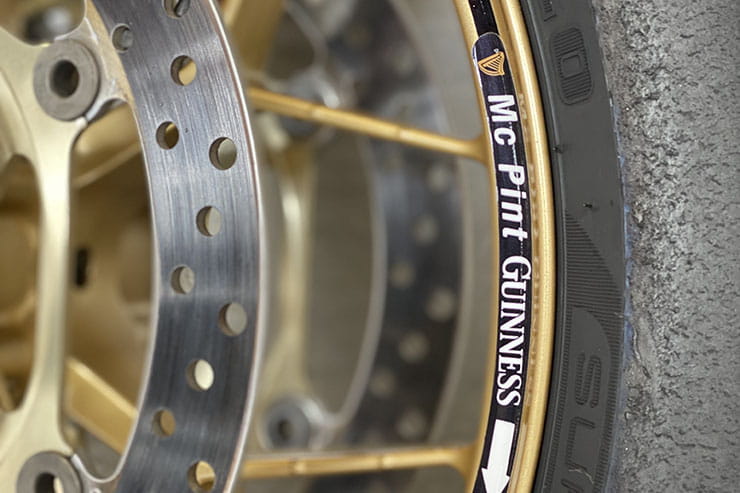 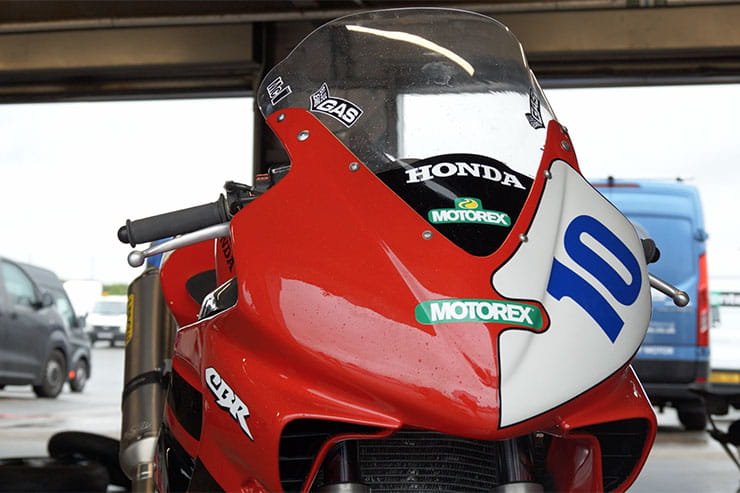 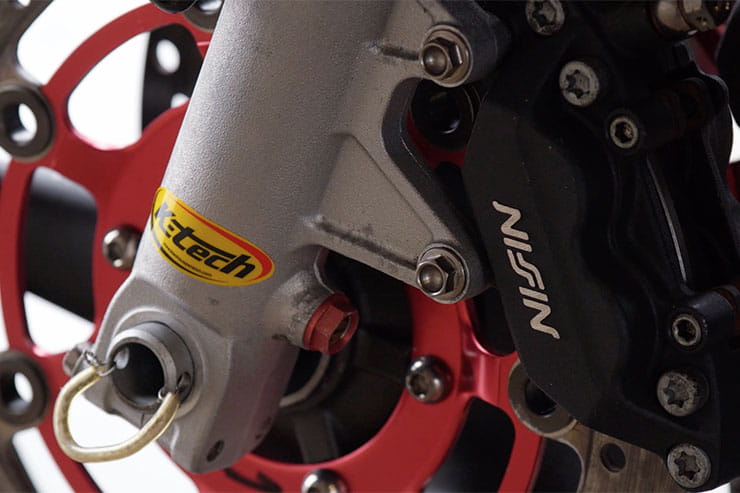 “The guy I got the bike off, he had a tyre shop in Bentham and for some reason it’s hung over all these tyres so I’m rooting through and there it is… a brand new, period, 2002, front Pirelli tyre. It’s a brand new, old tyre! I don’t suppose it’s probably a good idea to ride on it but it’s good to go, just put some decent rubber in it and it’d make an ideal track bike. They did everything that you’d ever want it to do.

“I think I got round the Isle of Man in about 120/121mph. I was 5 seconds behind Jim Moodie, he was on the V&M bike, I was hanging in there, and then she went pop at the end of the Cronk-y-voddy, everything was against us that year but it made me grow up a bit, I learned a lot that year. It gave me a bit of a false reading of the World Championship, there wasn’t much fun in the paddock. In the 2001 year with Kirk McCarthy, Moodie and all the boys we’d all stay over after the races, we’d all be in the motorhome having a few beers. David Jeffries would be involved, Glen Richards… it was just epic.

“Then I went to Worlds and there weren’t many Brits, Neil Hodgson was there but he was a bad tempered little pr*ck when he was racing. James Toseland was there but everybody was in their own little things. The only place I had fun in the World Supersport paddock was with the Sidecars so I’d go and have a glass of red wine with them!

“If it were dry today (Bennetts Track Day at Donington) I’d be out on it, but I don’t want to get it to dirty just yet! Look at the Classic TT, at some stage it’ll be eligible, this is an ideal bike for it they’re really nice to ride on the roads.”

Damn you pesky British weather but then again, the McGuinness boys have got plenty of opportunities to bring the CBR600RR out to play once again with three further Bennetts Track Days this year and plenty in the planning stages for 2022 already. And you never know, with the Classic TT rules frequently being updated to allow more recent classic machinery in, we might well see John on it once more at the Isle of Man.