“I felt like I was free again” - Wayne Rainey rides again 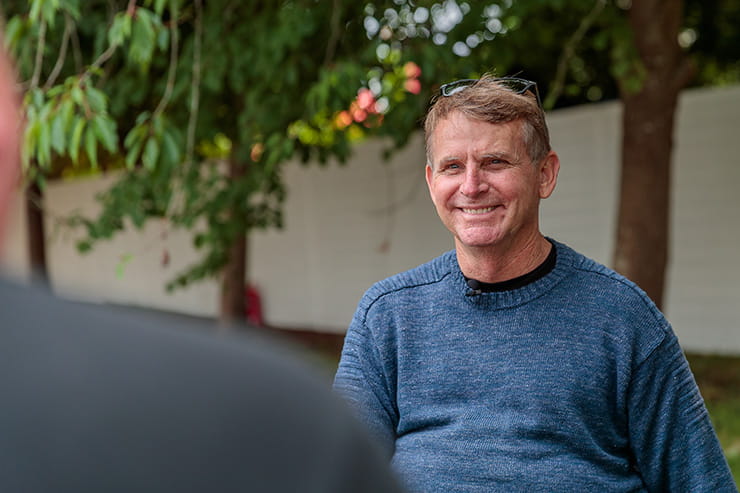 As a Grand Prix legend that certainly needs no introduction, it’s only right that the above introduction to Wayne Rainey’s poignant, emotional and truly remarkable run up hill during June’s Goodwood Festival of Speed should fall to the man himself.

Almost three decades have passed since Rainey, now 61-years old, had immersed himself in the distinctive clatter of a 495cc V4 soundtrack from the rider’s seat, the Californian reviving sensations of raw Yamaha YZR500 power as they shivered through his arms under acceleration.

Indeed, strides in technology coupled with the sheer grit and determination of disabled sports people that view adversity as a barrier to smash rather than halt have led to some truly remarkable feats in motorsport over the years.

Take ex-F1 driver and four-time Paralympic gold medallist Alex Zanardi for example, who went on to win races in the World Touring Car Championship driving a car with hand controls. Or former WorldSBK rider Joan Lascorz, who this year completed the Dakar Rally as a tetraplegic. How about former 500GP rider Takuma Aoki, a paraplegic that has challenged himself to contest disciplines as diverse as rallying and the Le Mans 24 Hours.

Alas, for Rainey, his competitive racing career came to a cruel halt on 5 September 1993 when a crash while leading the Italian Grand Prix at Misano broke his spine and cost him the use of his legs. The accident came at the peak of Rainey’s powers in 500GP with that elusive victory in Italy having been destined to put himself on the cusp of a fourth consecutive World Championship title.

In the years and decades that passed, Rainey would ride again in a handful of outings aboard specially adapted sportbikes, an achievement of extraordinary magnitude regardless.

However, his Goodwood feat was on another level with Rainey reunited with the very machine that powered him to 24 wins and 65 podiums in a truncated but nevertheless glittering six-year GP career.

Perhaps most poignantly, it gave Rainey the unexpected opportunity to write a belatedly happier ending to a determination to prove he could ride again, a vow that gave him strength in the initial days of his recovery only to fade to an impossible fantasy as the seriousness of his injuries sunk in.

“When I was first injured, for a few weeks while I was still in hospital, there was a thought I had about getting on a GP bike again,” he told BikeSocial in an exclusive interview.

“That got me through for a couple of weeks, [but] those thoughts faded quickly and pretty soon it wasn’t a thought again.

“It has been 25 years since I ever thought I’d have a chance, then when this opportunity occurred with the Duke of Richmond [owner of Goodwood Estate] putting this event on, Yamaha was able to step up, take the bike out of the museum and made it adaptable for me and here we are.” 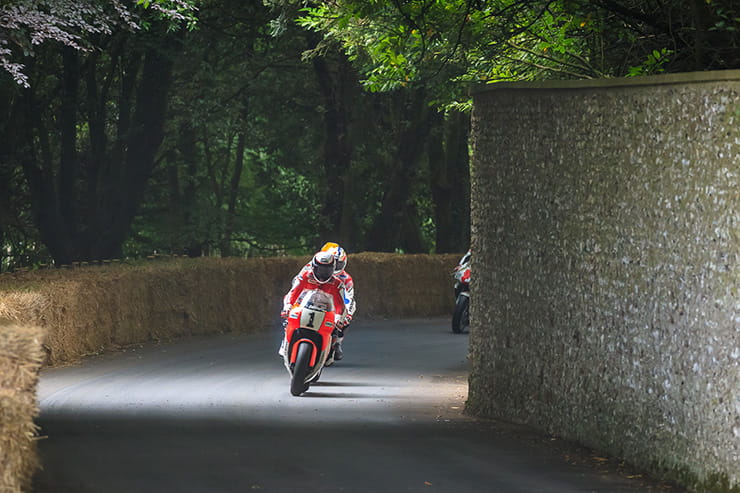 Many years have passed since the physical and mental strain of adjusting to his ‘new life’, but his Goodwood run is indicative of a close relationship with Yamaha that was immortalised during his readjustment and remains strong today.

“My first World Championship winning GP bike is my most prized possession. After I was injured in 1993, I was in hospital for 11 weeks before they brought me back home for the first time.

“[I arrived] knowing I had this new life I was starting to live and I didn’t understand, but I drove up my drive and there was a crate sat in my front porch, and it was my bike from 1990 World Championship.

“It was the first bike Yamaha had ever given away to a racer, so that made my career right there.”

Referring to the YZR500 as ‘an old friend’, Rainey says his Goodwood outing was a moment - one he never imagined ever experiencing again - to savour.

With Rainey setting off up the hill to travel down memory lane, tapping into that unmistakable feeling is - as it turns out - just like riding a bike…

“It was an emotion that I could not think about or knew what it would be like until I was on the bike,” he admits.

“They took it off the stand and it was in gear, then I took off and I was like ‘wow’.

“It felt right, I felt like I was free again and it was really nice because I didn’t think about anything else, except where I was going and feeling the bike, it felt like an old friend.” 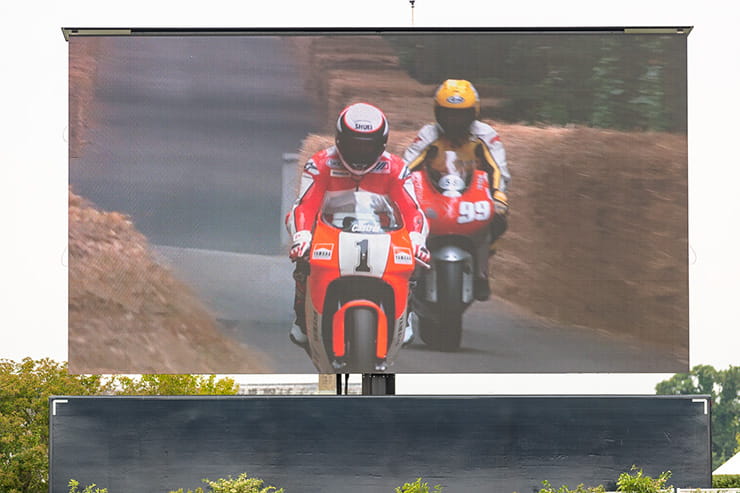 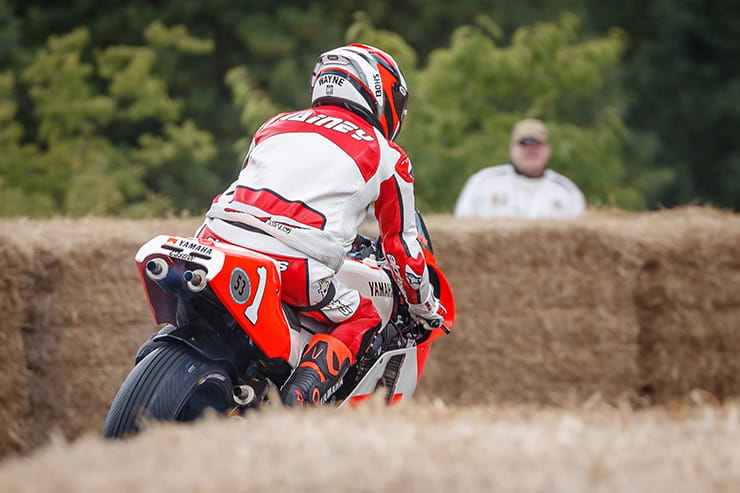 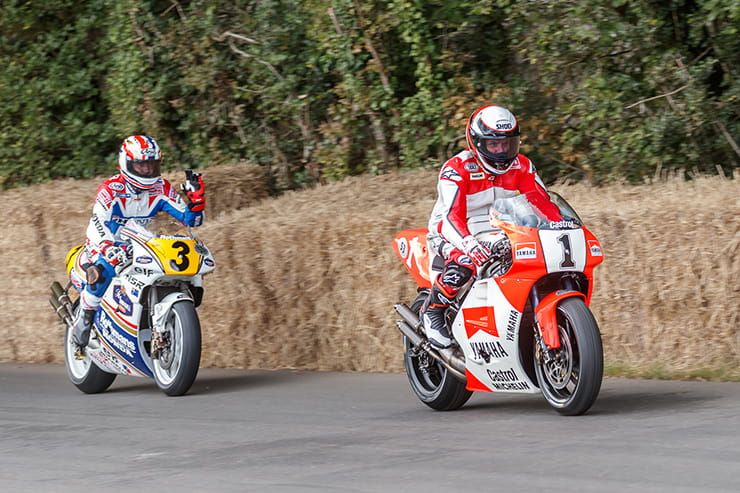 The outing helps bring Rainey full circle, enabling him the gratifying chance to supplant that day in 1993 with this one in 2022 as a more sentimental recollection.

Regardless, Rainey has numerous examples of successful times sat in his personal archive to dial into when necessary, not least on British soil upon which he achieved his first GP victory at Donington Park.

“I raced Silverstone in 1984, but they’ve changed that track since. Silverstone was an amazing track back in 1984, I would love to race there again.

“I won my first GP at Donington Park, so that’s special to me even though I wasn’t a fan of the track. But Brands Hatch, I love the short circuit there and you could really race hard there, that was one of my favourites.”

While his racing career concluded prematurely, Rainey remains one of motorcycling’s most instrumental and influential figures with a litany of high-profile roles within the industry over the decades, not least his current position as the incumbent President of the MotoAmerica series.

As rewarding as his managerial roles today are, nothing compares to the nostalgia of squeezing into his leathers and pulling a helmet on, with Rainey saying the ritual still has the power to transport him back to those private and solitary seconds before lights out.

“When I think of that young 11-year-old Wayne Rainey sitting in a classroom, daydreaming about the feeling of racing a motorcycle, I would say to him ‘never forget that feeling’, feel it for the fun.

“When you stop enjoying racing that is when you have to start figuring out a different way to make it fun again. But that is what racers have to realise, you have to do it because you like it.

“There is nothing like the feeling of putting your helmet on, your leathers on and getting all prepared.