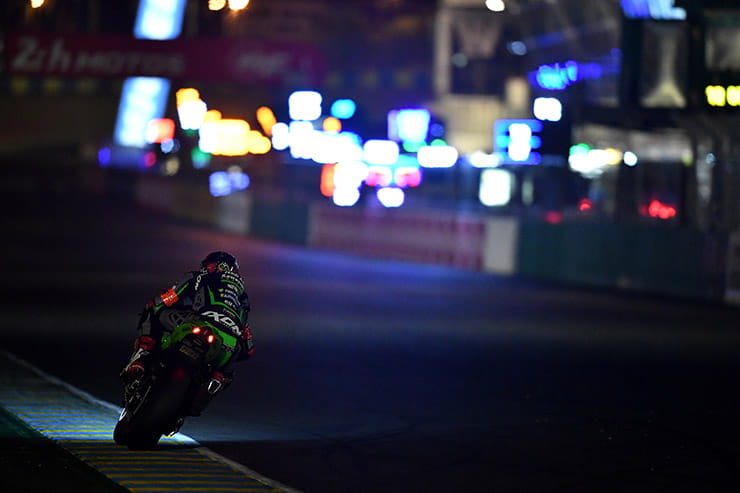 It's a cold day in April. It's 3 a.m. and a light drizzle has been falling for the last couple of hours. Most sensible people are tucked up in bed, but on a two-and-a-half-mile long circuit in North-Western France, sleeping is the last thing on anyone's mind.

As the bikes cross the finish line to complete their 418th lap, the countdown clock clicks over – just 12 hours to go!

This is EWC, the most extreme race series on earth and a spectacle like none other. 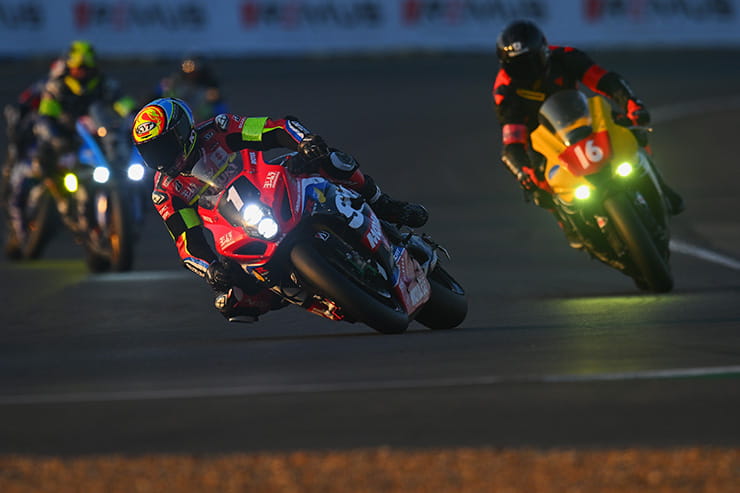 What is motorcycle endurance racing?

The Endurance World Championship (EWC) is defined by the Fédération Internationale de Motocyclisme (FIM) as "the ultimate high-speed test of rider and machine".

To earn this impressive title, races last from between 8 to 24 hours and must include both day and night racing.

Obviously, it's too much to expect a single rider to race for even 8 hours straight, let alone 24, so each team comprises three main riders with a fourth reserve rider in case of injury/illness.

Unlike traditional short-circuit racing, where first to cross the finish line wins, the aim of EWC racing is to rack up as many laps as you can in the time allowed. In a typical 8-hour race, this will be over 200 laps, while in 24-hour races such as Le Mans, the leading bikes will complete well over 800 laps.

Points are still awarded for your position at the end of the race duration, but bonus points are also awarded for positions at key points in the race, such as positions at 8 hours and 16 hours in 24-hour races, and for qualifying positions. A full breakdown of the points system is detailed below.

Finally, just in case racing for 24-hours in all conditions isn’t bonkers enough, there are two classes.

Formula EWC bikes are the top superbikes and can have modified forks, dampers, swing-arms, brakes, radiators and exhausts as well as some engine tweaks and quick release wheels for super quick pit stops.

Superstock bikes compete for the World Endurance Cup and are closer to road-going bikes with very limited engine mods and replacement exhausts only. Wheels must be the same as road bikes, so a good pit strategy is vital success in Superstock.

Two classes of bike, BUT, they're all on track at the same time, meaning there's plenty of overtakes, near misses and guaranteed action.

Oh, and as if all that wasn't spectacle enough, each race commences with a standing start where the riders and bikes are lined up on either side of the track. On starter's orders, the riders sprint across the track and jump on their bikes. 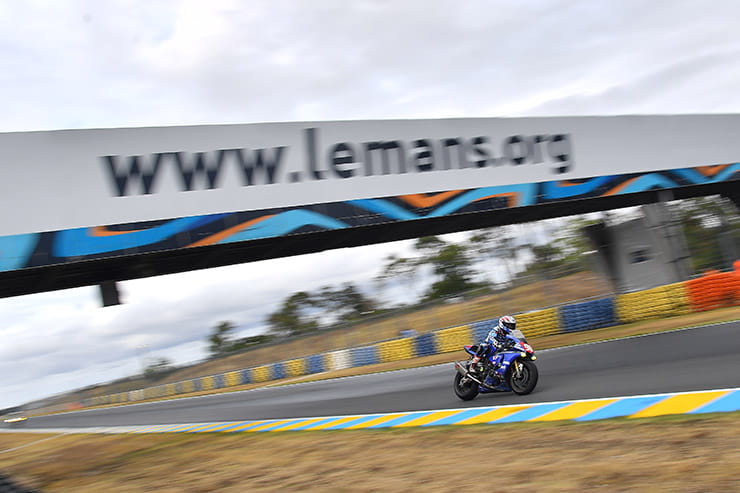 There are typically just four or five rounds in an EWC season (it varies each year), which doesn't sound like much of a season, but when you think that even an 8-hour race is contested over 216 laps, that’s the equivalent of around 7 back-to-back MotoGP races.

This year, the Championship is being contested over 4 rounds as follows: 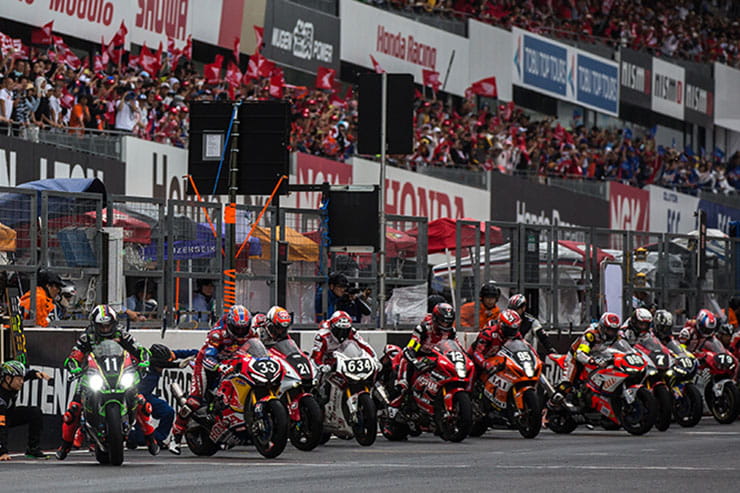 Where can I watch EWC?

European broadcast rights to EWC are held by the Eurosport channels, so if your TV package includes these channels, you can watch some great coverage of each race. Don’t despair though if you can't get Eurosport and want to follow the progress of your favourite team, as the EWC website provides a great live timing page at https://www.fimewc.com/live-timing/ as well as a great selection of videos on the FIM EWC YouTube channel.

Where can I watch the Suzuka 8 Hr Race?

Due to the importance of the Suzuka race and its absence for the last few years, Eurosport are broadcasting LIVE and uninterrupted coverage of the race, starting at 3:15am, BST.

What are the best times to watch?

The beauty of EWC is that, a bit like Test Match Cricket, you don't need to watch the whole event – just tune in as and when you can. That being said, there are some key points in the race that we would thoroughly recommend you watch live if you can:

The Start – It goes without saying that the first 20-30 laps of the race are essential watching. Despite the extended duration, multiple pit stops and the old adage of not being able to win the race on the first lap, but you can certainly lose it, most riders are keen to eke out an early advantage and so the first few laps are quite often mayhem. Once the chaos settles down, the timings of each team's first pit stop also gives and early indicator of who has a heavy right hand, who's bike is a bit thirsty or who's been eating all the pies and are wearing the tyres badly.

Dusk – It's worth checking online to find out what time local sunset is (weather apps quite often have sunrise and sunset times), convert that to GMT/BST and try to tune in for an hour around that time. As the sun drops below the horizon, the lights come on around the track (look out for the iconic Ferris wheel at Suzuka) and the headlights and back-lit number plates light up on the bikes. Add in the glowing brake disks and flashes of flame from the exhausts, and the race quickly becomes a feast for the eyes.

Rain – Keep an eye on that weather app forecast and look out for incoming rain clouds. The weather can be a great equalizer as teams rush in for tyre changes and the lower powered bikes can claw back some time against their previously unmatchable rivals.

The last 20 laps – While there might be a couple laps separating the top three or four bikes by the end of the race, it's always worth tuning in for the last hour. It's not unheard of for teams to run out of fuel, the bike to just give up, or for riders to make some 'errors of judgement' having spent so long on the bike. Who can forget the end of the 2019 Suzuka 8 Hr when Jonathon Rea binned the works Kawasaki on the final lap, gifting Yamaha the win, only for the decision to be reversed while everyone was in the restaurant later that night. 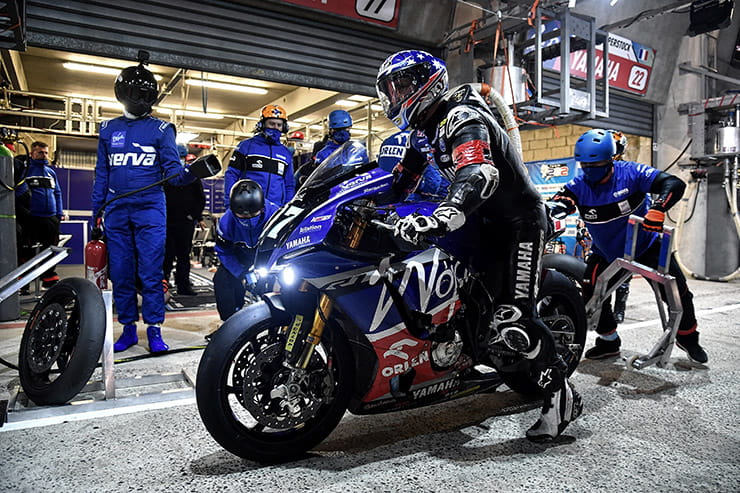 How do EWC bikes compare to World Superbikes?

Despite looking similar and also being based on road going superbikes, EWC bikes are quite different to their BSB or WSBK cousins.

Unlike BSB or WSBK where lightness is key, many of the components in EWC are designed for strength and/or to allow for easy removal and replacement, in the event of a spill.

As you can imagine, racing over 800 laps also means that refuelling and changing tyres are a common occurrence (over 25 pit stops in a 24-Hr race) and so EWC bikes have quick-fill, large-capacity fuel tanks (twin fillers allow fuel to be gravity fed at high speed – fuel in one, while the air exits through the other) and (for the EWC class bikes) quick release wheels to minimise time spent in the pits.

While all the additional hardware and fuel capacity makes the EWC bikes heavier than their BSB or WSBK counterparts (min. 175Kg for EWC vs 168Kg for BSB/WSBK), lap-times are not that much slower – the YART Yamaha EWC bike lapped Autodrom Most at 1:33.553 in qualifying for last year's EWC race, compared to this year's WSBK pole position lap of 1:30.947. 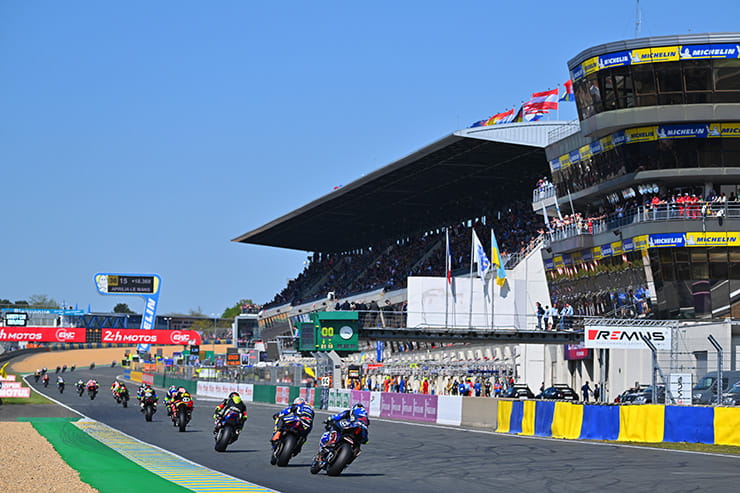 Which bikes complete in EWC?

Both the EWC class and World Cup Superstock fields are formed from just six bikes:

Works factory teams such as YART Yamaha or Yoshimura Suzuki line up along-side privateer teams such as Team Moto AIN, and all are shod in one of three tyre brands - Bridgestone, Dunlop or Pirelli. 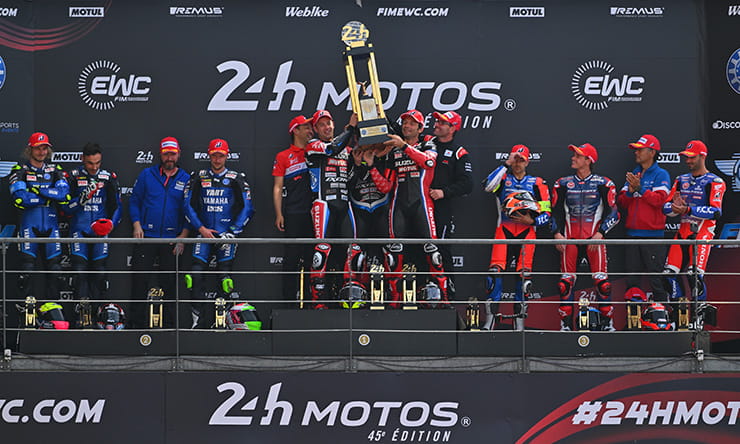 Which riders compete in EWC?

Take a look down the entry lists for any of this year's EWC races and you're soon realise it’s a 'who's who' of famous riders from BSB, WSBK and MotoGP as well as some EWC specialists.

Are there any British riders in the EWC?

Oh, yes! Despite EWC previously being the preserve of the French, the grid is littered with Brits, many of whom will be familiar from BSB, WSBK to MotoGP:

and just for the Suzuka 8-HR: 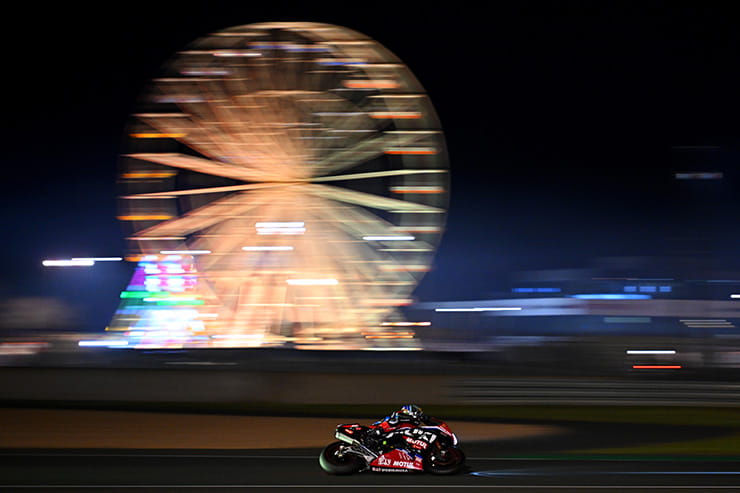 How are points allocated in FIM EWC?

Points are awarded to teams in the Formula EWC and World Cup Classes as follows:

Additional Points (For races of 12 hours or more, additional points will be awarded after 8 and 16 hours).

Finally, points awarded in the final race of the season are multiplied by a factor of 1.5.