VIDEO: How much faster is a British Superbike rider than me? 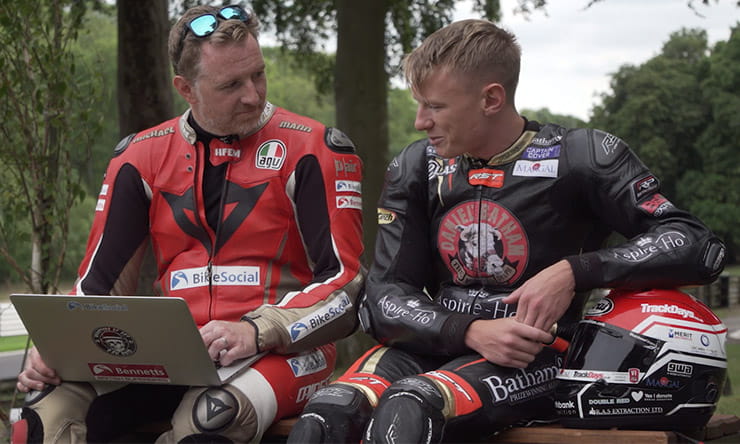 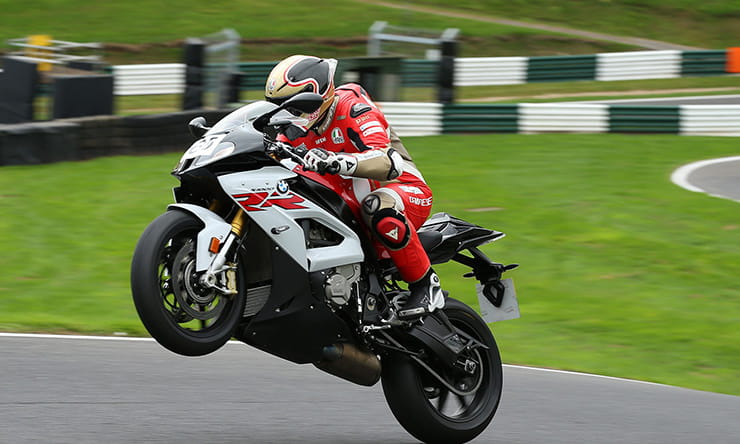 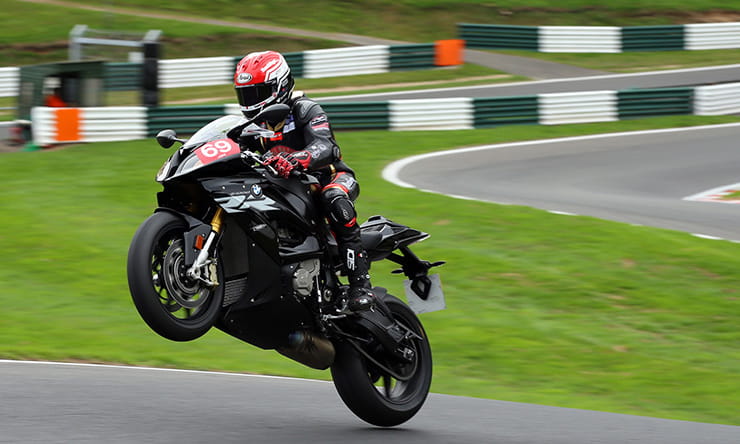 Picture the scene; you’re sitting there on Sunday afternoon watching MotoGP or BSB either in a grandstand on the edge of a racing circuit or on TV/your mobile thinking, ‘I reckon I’ve got what it takes to do that’. In reality there are only a handful people who could. But what makes all the difference? Just how fast do you need to be?

At this stage, I realise this could be highly embarrassing but in the spirit of discovering how far off the pace I am, I enlisted 2016 British Superstock 1000 Champion, Taylor Mackenzie, a pair of identical BMW S1000RR’s road bikes and a VBOX Sport dataloger. We find ourselves at a Bennetts Customer Track Day hosted by the California Superbike School at the tight, twisty, narrow, undulating, challenging yet picturesque Cadwell Park.

After a few years of track day riding and training, I’m happy to represent the average rider from the fast group while the 25-year old son of multiple British champion and MotoGP rider, Niall Mackenzie, is the professional rider who competes at the highest national level. Is the difference going to be a few measly seconds per lap that I could make up with some professional guidance and another 30 laps of the 2.17 mile Lincolnshire track (then wake up from an obvious dream)? Or am I looking at 15 seconds per lap which will see me firmly put any kind of competitive racing thoughts to bed. Not that I have any.

Here’s how it went:

How much faster is a British Superbike rider than me?

Interpreting where I lose time, it’s clear to see from the data trace that I’m consistently slower on the approach to every corner, as predicted by Mackenzie beforehand, it’s about being later and braver on the brakes. 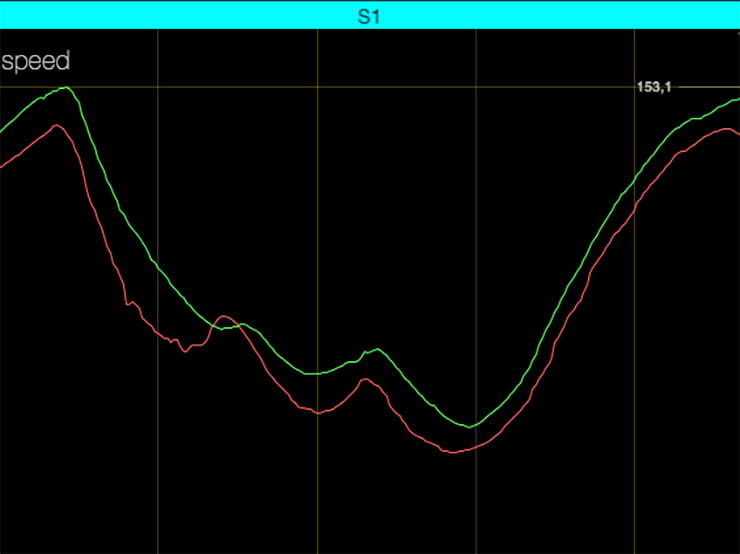 Sector 1 (start/finish line to the braking into Park Corner)

I’m 10mph behind Taylor at my highest speed along the straight and am 6mph slower at the apex of Coppice although excitingly my red line overtakes Taylor’s green one momentarily as his apex is slightly later meaning I’m on the gas slightly earlier toward Charlies 1… where I’m 11mph off at that apex. Into Charlies 2 and I’m 7mph off at the slowest point although mine slightly earlier than Taylor’s. As a positive, that means I’m accelerating earlier but he’s already carrying more speed onto the straight – 5mph to be accurate.

My top speed is 142.1mph while Taylor reaches 149.9mph a few metres later and is therefore later on the brakes into Park Corner in Sector 2… 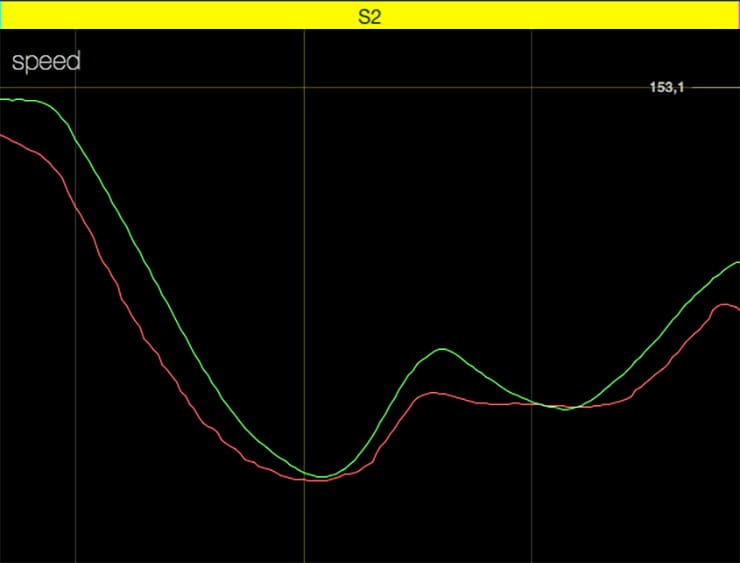 Chicken boy Mann is once again earlier on the brakes and on the approach to Park Corner there’s a speed differential of 22mph at one point. However, at the apex of the corner, I am just 0.6mph slower. That’s where my good news ends as Taylor manages to reach 84.4mph between Park and Chris Curve while I only manage 72.8mph.

That said, at the apex of Chris Curve I’m up by 0.8mph! but again, my small victory is short-lived as Taylor accelerates harder towards the Gooseneck earning him an 11mph advantage. 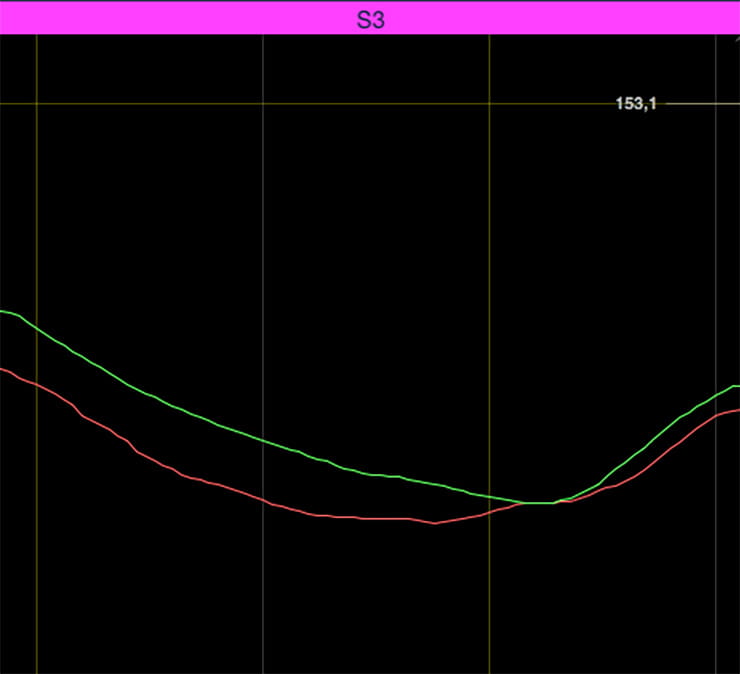 This is a short section but I still manage to lose a second. Turns out I need to work on my corner speed into and around the right-hander of the Gooseneck as I’m 14mph slower through it, although identical to Taylor at the apex of the left-hander at 64.4mph. That is his slowest speed through this section while at that point I’d already started to accelerate down the hill from a slowest speed of 60.1mph. 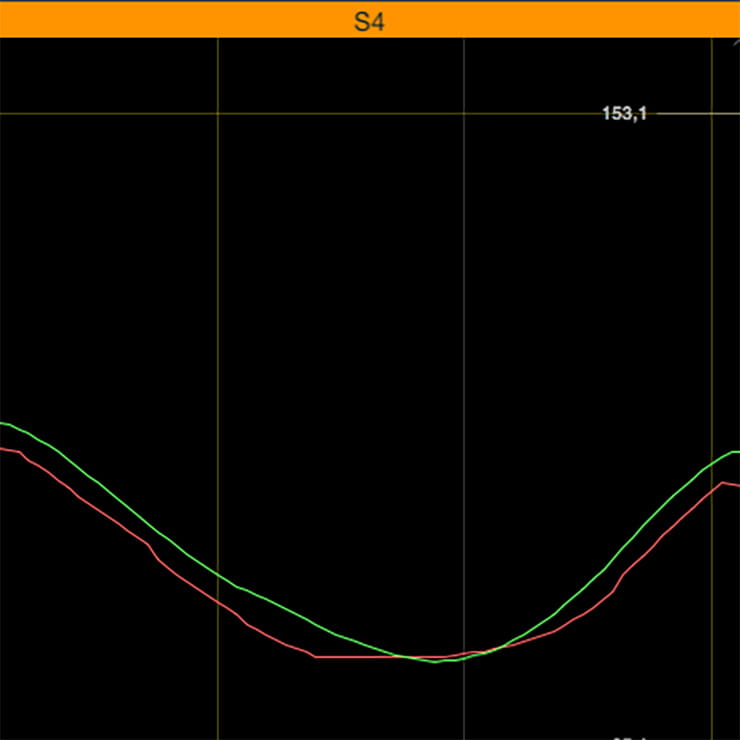 Similar to the Gooseneck, I’m slower for longer. On the downhill approach and into the left-hander I get down to 43.1mph while Taylor gets to his slowest point of 42.1mph later than me and for a shorter time. In fact, I’m 1mph ahead at his slowest as I’ve begun to accelerate away, though am not as aggressive on the power as Taylor is soon 5.3mph when I brake (at 78.3mph) for the chicane while the pro is still accelerating. He reaches 84.7mph and into sector 5… 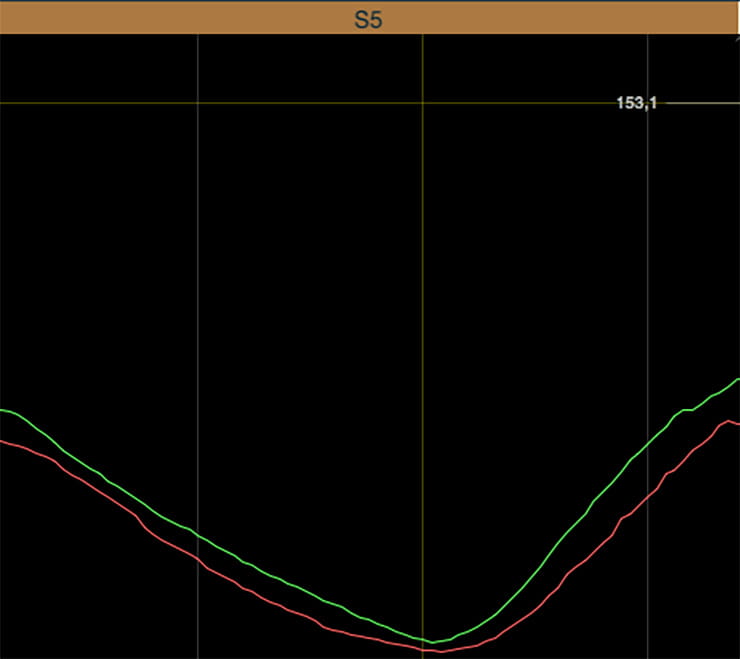 At 30.6mph, I’m 2.2mph behind Mackenzie at the slowest point of the tight and narrow right/left chicane. Once again I’m not as aggressive with the throttle and end up 13mph down on the approach to Mountain Bottom. 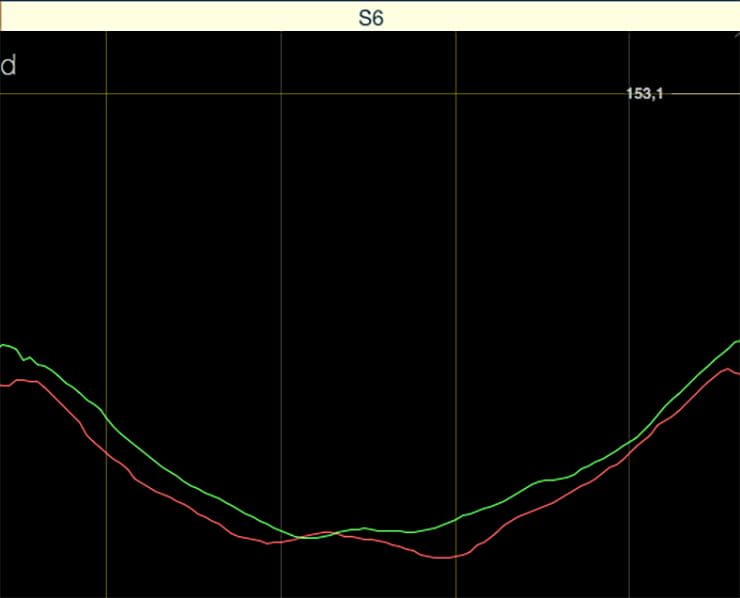 Interestingly here I’m carrying a slightly higher speed (just 1mph admittedly) around the left-hander yet am 9.5mph slower on the right-hander. Perhaps I’m lacking the experience of really attacking the steep incline with a curved crest. Yet over the top of the crest I’m within 0.5mph, probably because I’ve not scrubbed off speed by being in the air! 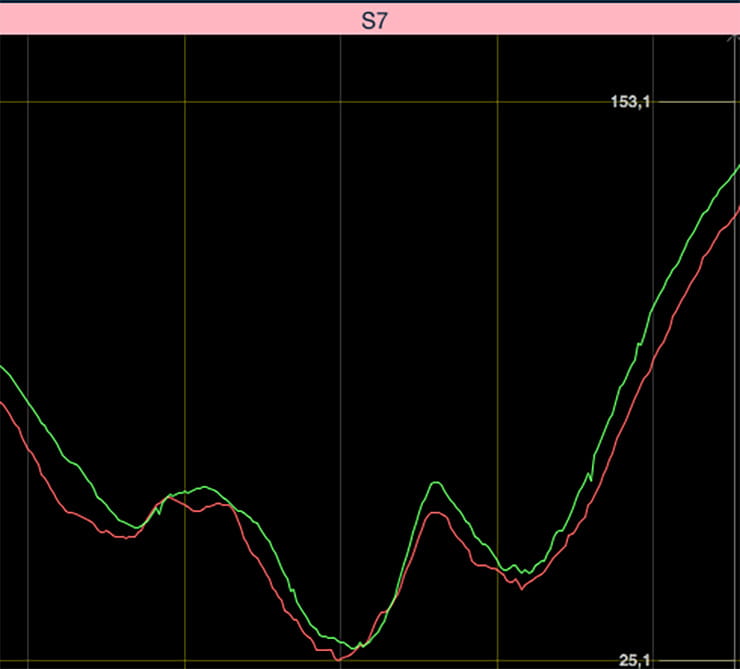 This sector includes the twisty Hall Bends, the slowest part of the circuit at the Old Hairpin followed by the precarious off-camber right-hander at Barn and onto the start/finish straight. Mackenzie takes another chunk of time out of me here.

It starts with the 13.2mph advantage going into the first right-hander of Hall Bends, yet on the left-hander I’m the one with a 2.4mph higher speed which quickly evaporates as I stutter around the next right and left before we brake into the Old Hairpin. Once again, I’m slower earlier and he’s only just reached his slowest point as I’m accelerating, giving a false impression of our speed differential. Yes, we’re splitting hairs but we’re both drilling the BMW S1000RR as hard as we think we should. We both power down towards Barn where there’s a 7mph difference as we tip in. As we begin to accelerate out and onto the straight there’s just 3.7mph between us but the stutters in Taylor’s chart suggest he’s punishing the rear tyre hard and by the time we’ve crossed the line, he’s 9.4mph faster. 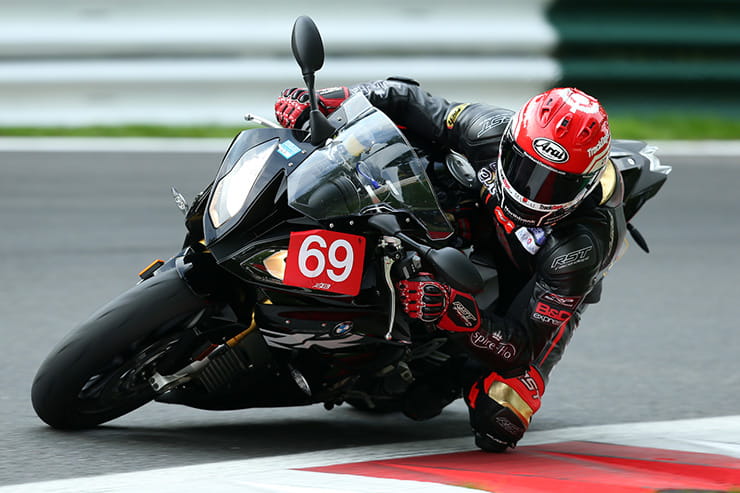 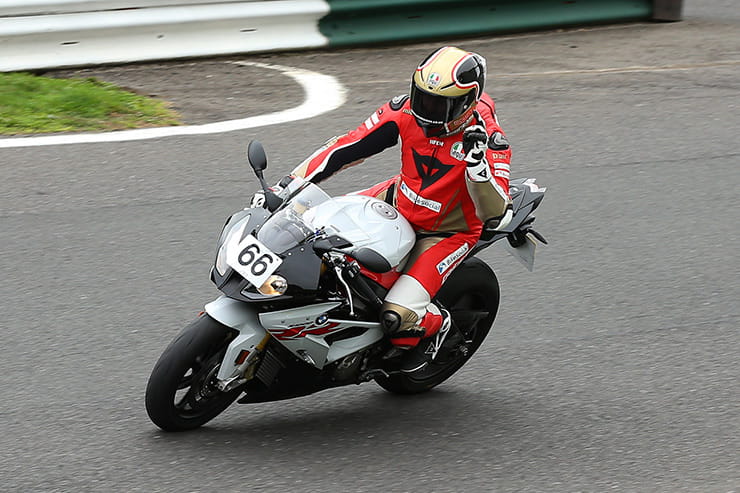 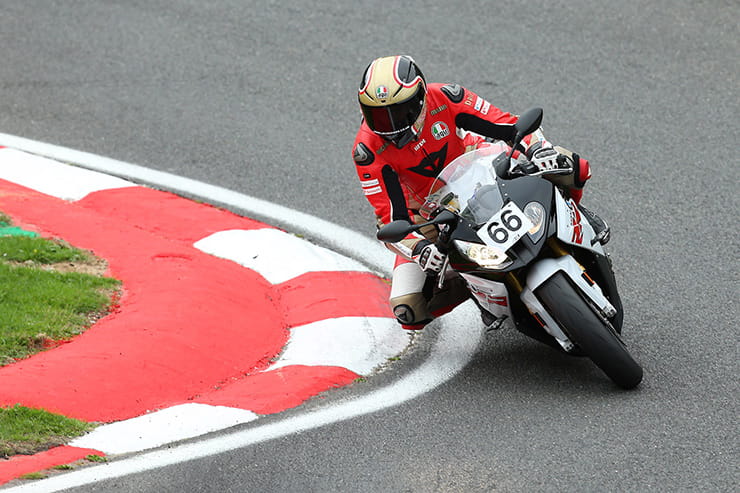 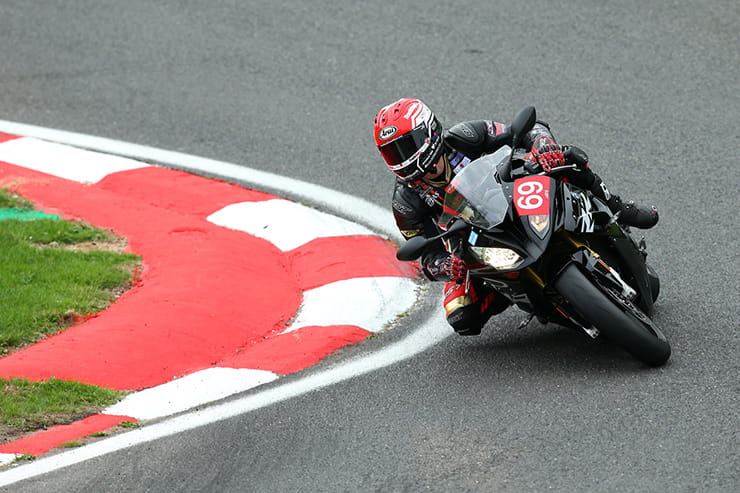 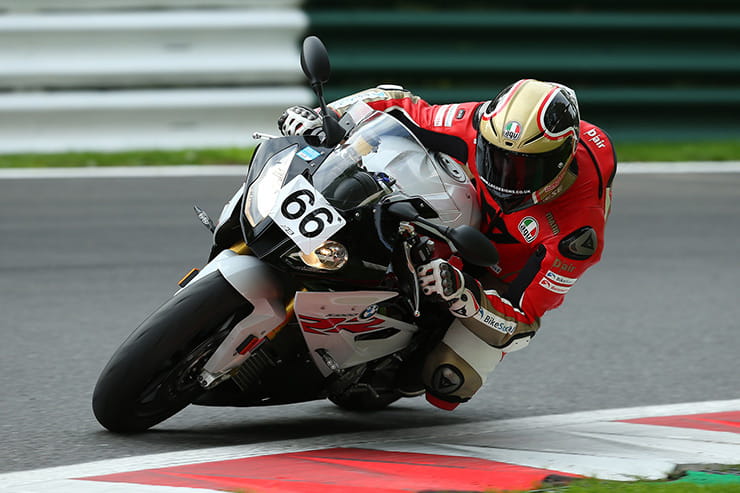 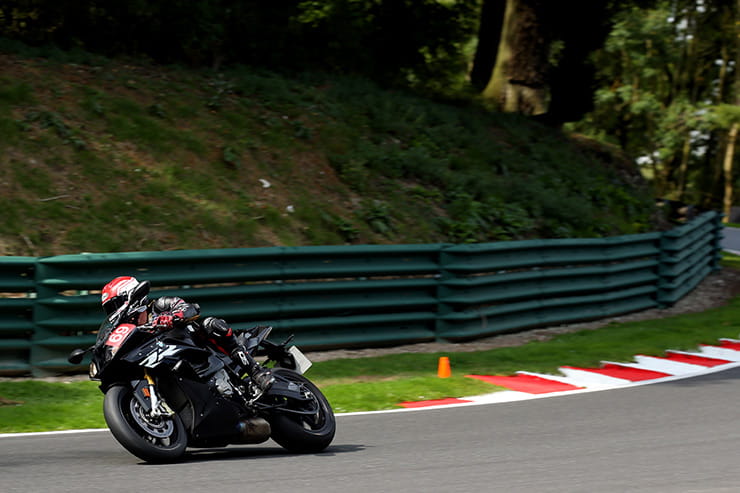 Moral of the story: Professional racer Mackenzie is better at going slower than me. We kind of knew he’d be harder and later on the brakes and more aggressive with the bike out of the corners but what is interesting is that he spends a shorter amount of time being slow. Well, that and being a hell of a lot braver. 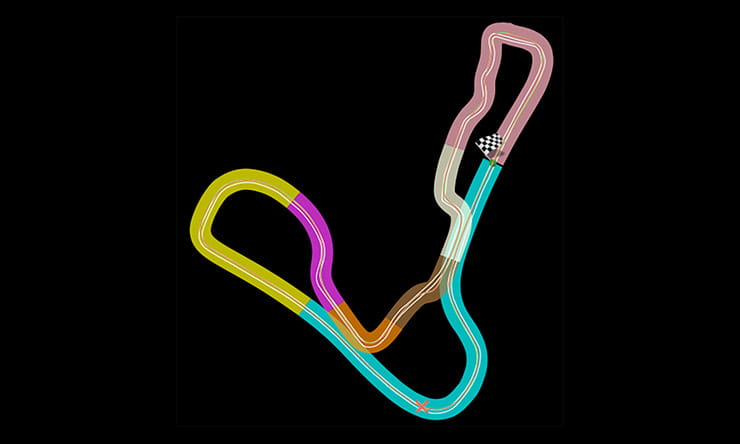 Who is Taylor Mackenzie?

The 25-year old Leicestershire-man currently competes in the National Superstock 1000cc Championship on a Batham’s-backed BMW S1000RR, the very same championship he won in 2016. Son of former multiple British champion and MotoGP rider, Niall Mackenzie, Taylor has tasted life in the BSB paddock riding for Bennetts Suzuki in 2017 and Moto Rapido Ducati during the early part of 2018.