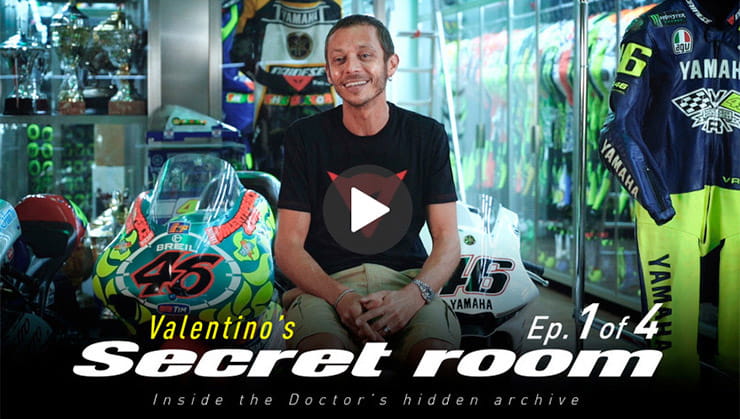 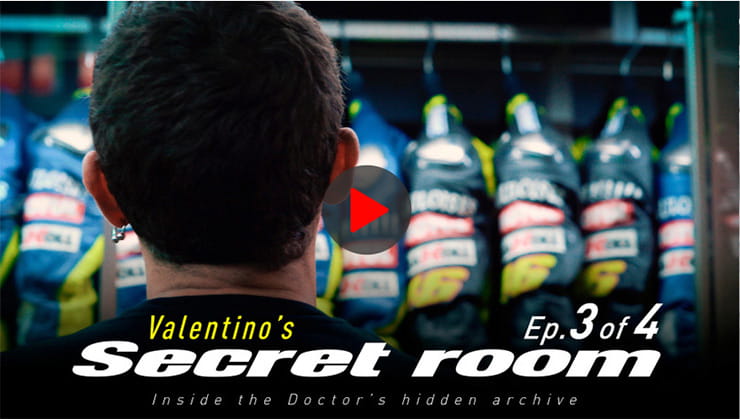 If ever a motorcycle racer has been identifiable by the brand of leathers he or she wears, it’s the close association between Valentino Rossi and his Italian counterparts, Dainese, that would stand loud and proud.

And, as the MotoGP legend closes in on the twilight of his top-class racing career, with nine World Championships to his name, the 41-year old has opened the doors to his ‘Secret Room’, filled with suits, helmets, boots and gloves from his racing career, described in his words as “a sort of secret museum – just a place really to pit all those unforgettable items and unforgettable moments from my career.”

Exclusively for Dainese, Rossi is now sharing his 27-years worth of racing memorabilia in this four-part video series.

In the first part, called ‘The Secret Archive’ we hear about Valentino’s early life and why he ended up creating the museum. Only in the last minute of the episode do we see some of the artefacts.

Valentino tells us from the very first year he started riding big bikes in 1993 he wore Dainese, mainly care of his father, Graziano’s, relationship with Lino Dainese and from his early years watching his idols like Kevin Schwantz, Loris Reggiani, Gramigni, Capirossi, Doriano Romboni – all kitted out in the instantly recognisable Italian brand.

He talks about the greatest innovation of the firm being the airbag although he wasn’t sold immediately, saying, “The first time I tied was in Brno in 2009 and at first I didn’t really understand how much it was going to improve safety. So, I pushed to make it better and within 2 years the system had improved enormously”.

Talking about the reason behind creating the museum, Rossi says, “By 2006 space had become an issue with the racing gear, trophies, mementos, podium caps, prizes, etc – all the unforgettable moments from my career, so we came up with a room which used to be a workshop. The special suits include the Mugello one - the special Honda 500 suit with the hibiscus in blue and white, the suits from the Suzuki 8 Hours like the Castrol one from the first year and the Cabin one from the second year 2000-2001, the first Yamaha suit (Gauloises blue and yellow). You used to fight at the end of the year to not give the suits back to Lino!”

In part two, titled ‘Inside The Doctor’, we learn more about Valentino; the person. How the townsfolk of Tavullia act when he’s at home as well as his house in Ibiza. Who his friends are, why he ended up with his iconic number ‘46’, the sun and moon on his helmet designs, and the fluro yellow – so identifiably Valentino. The exact moment he goes into his race mode as he begins to concentrate on the job ahead, as well as the rituals (that some may say are more superstitions). Which bike that made the biggest impression with Rossi and how he’s had to evolve through his career with the transition into MotoGP and how the technology has affected him.

Not until part three of the series, ‘A Knight’s Armor’, does Valentino show us around, starting with an early fact; “There should be around 120 to 140 suits” as he begins showing us a selection of the poignant suits from his career including the first suit; a red, white, fluro orange and fluro pink version from 1993. He moves on to the first World Championship suit and the transition from boots worn outside to inside the suit in 1998, when he raced in the 250 World Championship. Vale introduces the Mugello suits he talked about in episode two and shows us the history of how the safety has evolved in his leather suits, which of course eventually feeds into the production versions you or I could buy.

And in the final episode, 'The Helmets of Vale', or in Italian, 'I Caschi Di Vale, The GOAT shows us a few of his favourite helmet designs from over the years as well as discussing his influence in the development of shape and aerodynamics of AGVs helmets. What a collection this man has, and we'd all give our right arm to see inside there for real.