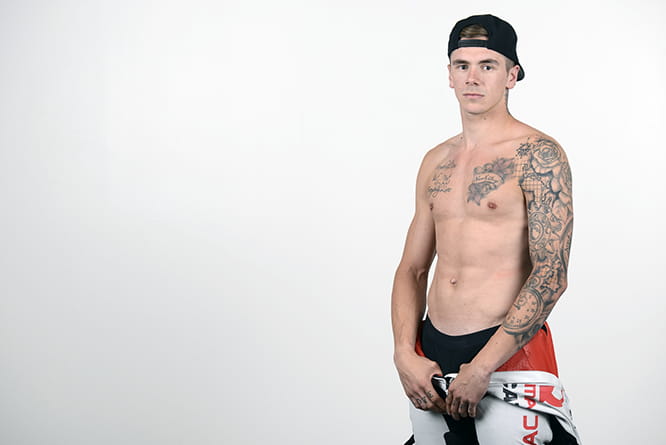 British MotoGP star and podium finisher last time out in Assen, Scott Redding, has a hobby, or even an addiction, not shared by many in the Grand Prix paddock; tattoos.

For a man who professionally covers his entire body in protective clothing, the fans don’t usually get to see Redding’s plethora of ink that adorns his chest, left arm, two hands and neck unless they follow the 23-year old Pramac Ducati rider’s social media accounts.

Instead of just gazing at his athletically toned body while feeling very self conscious, I asked him about the story behind each one, when he got them, which was the most painful and what comes next.

From memories of close ones who he’s lost and inspirational quotes to spur-of-the-moment skulls and even taking over the needle work himself, here’s an account of Redding’s tattoos in his own words, and  the transcript of the video follows:

***STOP PRESS: having spoken to Redding a couple of weeks ago when we recorded this video, he’s since been to see his favourite tattoo artists Micky Hall at Renshi Tattoo to have the poem he mentioned in this interview permanently marked onto his ribs. www.dagenhamtattoo.com 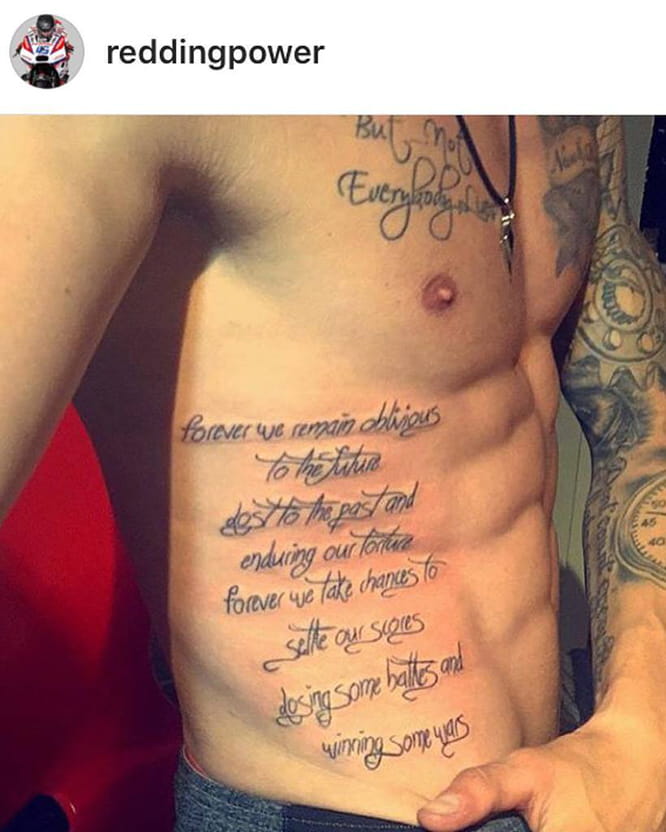 “F*ck yeah, ribs hurt,” Redding told me soon after. “I just looked at some quotes and that one suited me. It took about an hour and a half.”

Scott Redding (SR) – My first tattoo was this one, my grandparents, it was 2010 the year I moved to Moto2. They both passed away within a month of each other, because it meant a lot to me I thought having it close to heart was the best place. My sister actually has the same tattoo on her side, so we have the same connection which is cool! Yeah it was my first one there and it kind of triggered my tattoo development on.

SR - Next one was the roses with the sprocket – that one was a long one – that was a 6 hour one. This one (points to grandparents tattoo on chest) was 2 hours where as this one was 6 was a big step! I had this one because in racing a lot of people think the rider doesn’t have feelings. Which at the end of the day we are normal people – we are humans, you know I do day-to-day things like other people do. But on the same hand we are different. Sometimes people slate you because you’re not doing something right or you did something wrong, they think you’re invincible to it but actually it does actually hurt your feelings. You are human but at the same time we’d go out and race a bike at 200 odd miles per hour we do risk our life, we are a bit mechanical a bit different. So that was the reason of having them two things. 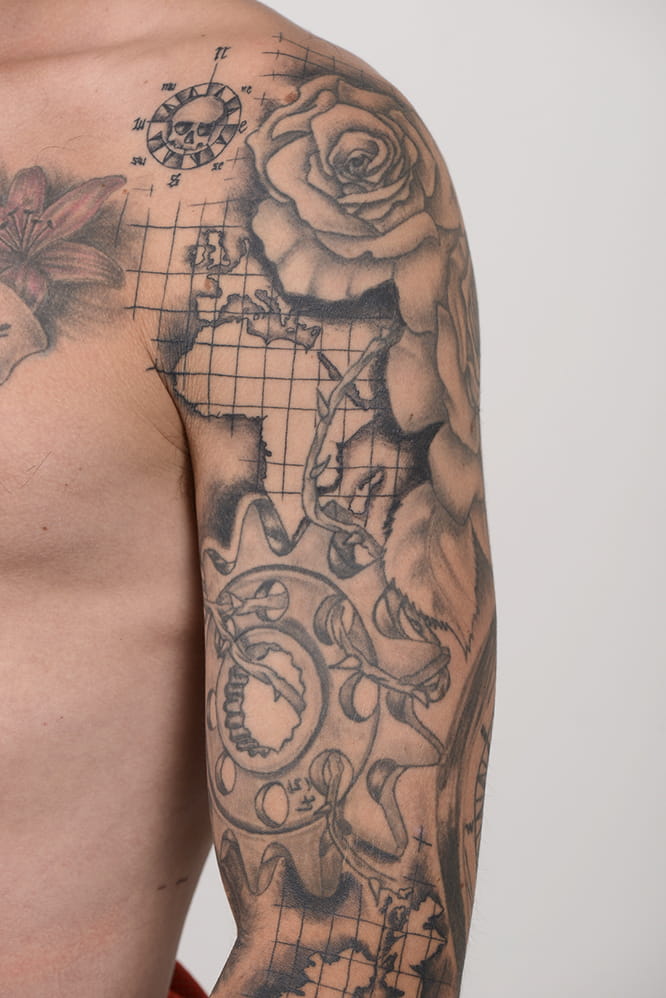 SR – This one; “Don’t count every race – make every race count” – That was the same place as this guy (points to chest) because where Mickey is, he’s up in London, for me to keep travelling there was a long way and I had this purely because of what it says. You know, I was sometimes finishing a race and thinking ‘I should have overtook him, I should have made that move should have done this and I had it done in the winter of 2012, anyway the year before I was fighting for the title (I can't remember the year) but I had that just to remind me that the next year, every time I go out, every race I go to I want to finish the race and be like ‘there is nothing I could of improved on’. For example, at the race in Barcelona, when the tyre gave up, you know I could have pulled in and said ‘ok the tyre's done’, but actually it was about digging deep and trying to finish the race and trying the best I could, because if I didn’t finish the race and then I got a lot if jip from the team saying ‘you should’ve done this, you should’ve done that’ well I should of but I didn’t, so I just don’t want to be in that situation.

Bike Social (BS) – there is a story behind where your star is from the crash you had on the Moto2 bike(?)

SR – Yeah well that scar there breaks my brain every time I look at it! That was the loss of a world championship right there! So I thought, at least when I’m gonna get operated, because got operated on Saturday night after the crash.  Just as the guy was putting me to sleep I said, "Just one thing – could you just miss my tattoo, please! Because I can’t handle him going over it again!" He did a really god job with the scar, it’s a bit off but the tattoo's still there so! You know, it’s still a memory there, not a good memory, not a good one – but it is what it is! 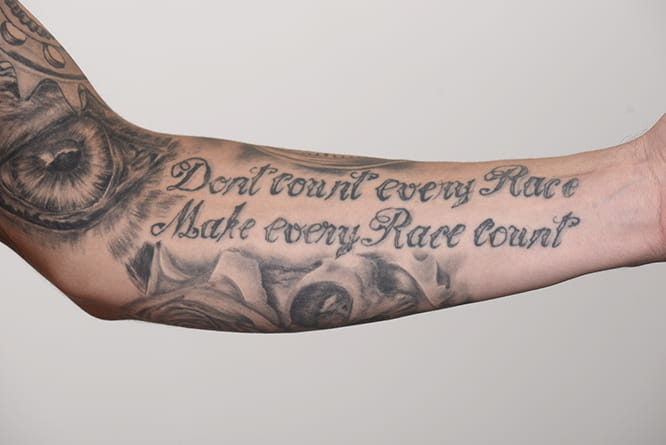 BS – Talk us through the stopwatch on your forearm.

SR – yeah that was actually the follow on from there. The stop watch was because everything is against time. You’re not quite fast enough you won’t make it, you know sometimes you're too quick you’ll miss it! And in racing that always counts, every lap, every corner. Also here I got the time pointing to 48 (seconds) which is for Tomizawa, the incident we had in 2010. And I had that because I wanted something close to me that I know, I don’t want to have a big number that everybody sees it, I wanted it to be for me personal, and to have him always with me when I’m racing, and I have my number pointing to the same place and we’re there together doing still what we do. 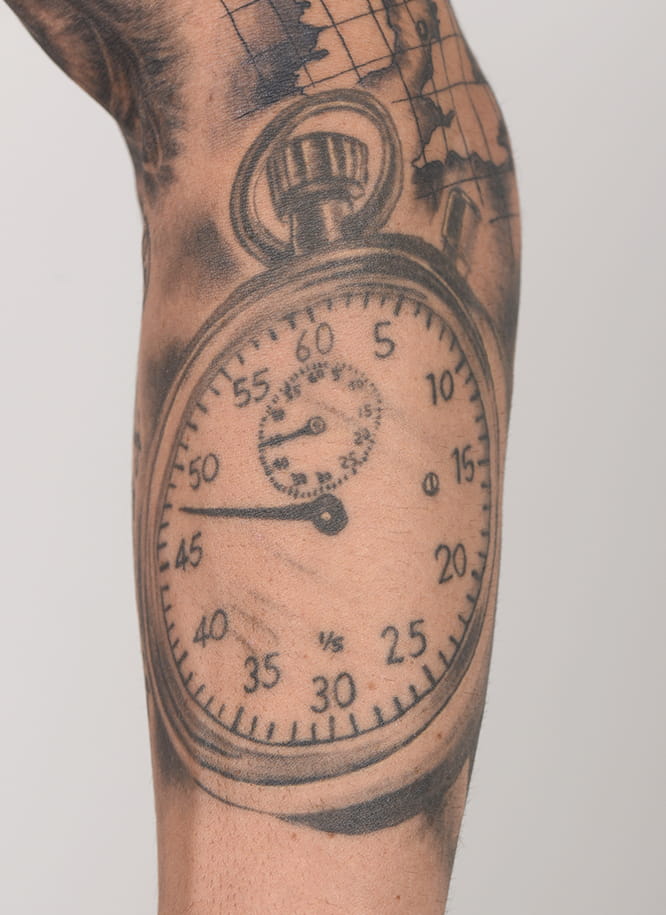 BS – and the most painful tattoo you’ve had to date?

SR – Umm it has to honestly be a battle between the hands and the neck. The neck really did hurt because we were trying to line up with the wings, it wasn’t quite right and then because it was with Mickey, it’s got to be on point, it’s got to be right, so it was clean it off with alcohol, again a print on, no clean it again, four times over with alcohol. My skin was raw before we started!  I kid you not! It was the rawest I'd ever felt! It was hurting before we started! As soon as he put the needle in I thought, ‘this is going to be a long evening!’  you know I stuck through I I got alright but the hands, (sighs) I don’t know if I would do it again! He started this one and I was like, ‘Wow, that hurts!’, just as he’s about to finish your like ‘Hmmm, a little bit fading…’ then he goes to the next finger! So you have that pain again!

SR – It’s just every time you start; you start with the pain you started the first one with. Because normally it goes a bit numb and you get a bit used to it – but every finger doesn’t get used to it! But by the time I got to this finger (little finger) the whole hand kind of… this was the best finger of all of them.  But then I had to start this hand. (2nd hand) and this hand had started fading then they started again on this finger and he did the first letter I was like, ‘I can’t do it – I cannot do it!’, the pain was incredible because, I don’t know the bone, (looks at hand) it was so sharp, the feeling was not normally too bad once you get used to it, but that…never again! 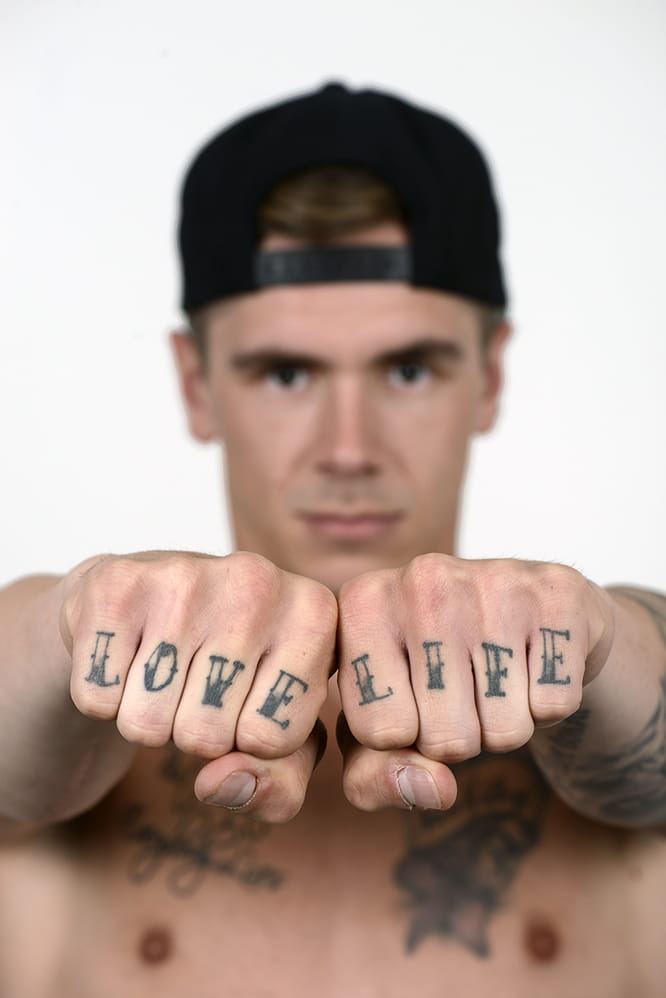 BS – and what about the one on your neck, is that one piece – the wings?

SR – Errm no it was 2 different ones I was in Thailand and I wanted to get the bamboo tattoo but I couldn’t find it, I wanted something a bit traditional you know? I wanted the Capricorn that I got there, but I wanted it to be with the bamboo but I couldn’t find anyone to do it.  So I thought well I’ll just go and get it done in a normal place, I just wanted it really dark, get some ink in there.  Normally a tattoo like that shouldn’t take to long but I was there for a good hour and 20, because he was ploughing the ink in and that was kind of hurting!! Then I had the wings done at a later date by Mickey. 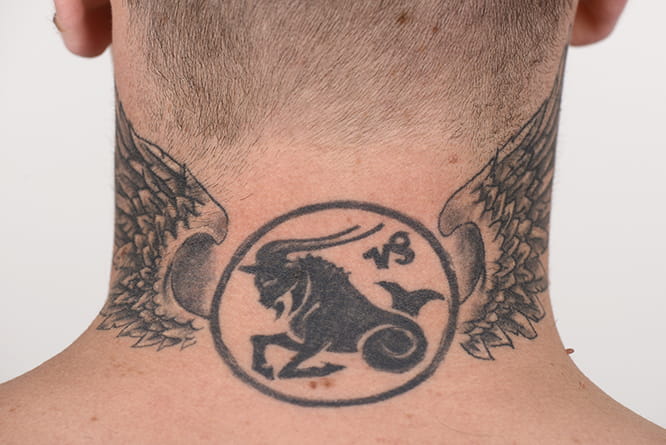 SR – My latest one was this, with all the map work because we travel a lot around the world and I like to travel and do a lot of road trips. We got the UK there, (points to tricep) we got some other stuff under here, a nice little skull up here. Just another thing that I do, about the only tattoo that I have that doesn’t have a meaning is the one on the back of my arm with the rose and the skull. I wanted to get a tattoo but I didn’t really know what to have. So I went to see Mickey and said, "Today is about doing what you want to do", so he said, "Skulls, what about skulls – I love skulls!".  I said, "you know what- do it!" and he just went free hand on the skull and would just do what he wanted to do as he does most of my artwork I thought I’d let him have his piece.

The same day I tattooed him!  I gave him my signature on his arm and to this day he still claims he’s recovering! 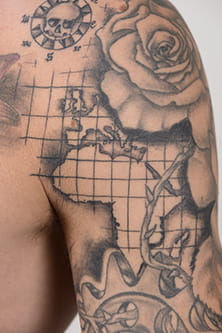 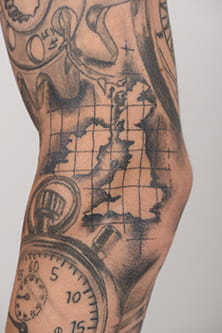 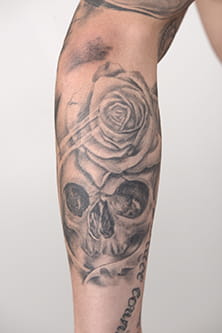 BS – Was it harder than it looks?

SR – it was just strange because you know, the needle is going really fast and you expect it to be all ‘dotty’ so you go slower and its strange how the skin moves.  It’s quite a delicate place there for me to even do that, it wasn’t too bad, it wasn’t perfect but you can’t always be perfect!

SR – What’s next…I’d like some stuff down my ribs, I’d like a nice motivational slash poem, something that means something to me.  I would have liked, my dad wrote a poem at my nans funeral, it would have been perfect but, him being a Redding – loses it! – something I would do!  I’ve been on at him to try and find it, he can’t find it.  I want to try and do something from the stuff I can remember from it, and some stuff I could bring into it, I could use that down there (points to ribs).

Yeah I’d like to get down my hand here finished try and have a rest then, its hard though you know if you got tattoos out there you know, you want to get more and more and more – it’s hard to kind of stop!

BS – It is an addiction!  You could always have BikeSocial written on you somewhere!

SR – you’d have to pay big money for that! 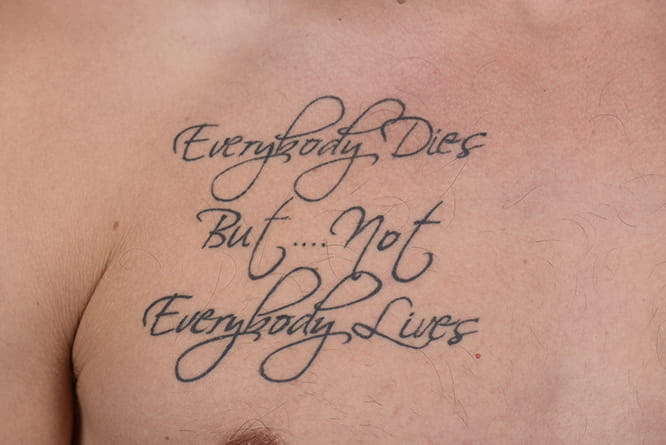