Remembering the greatest TT of all 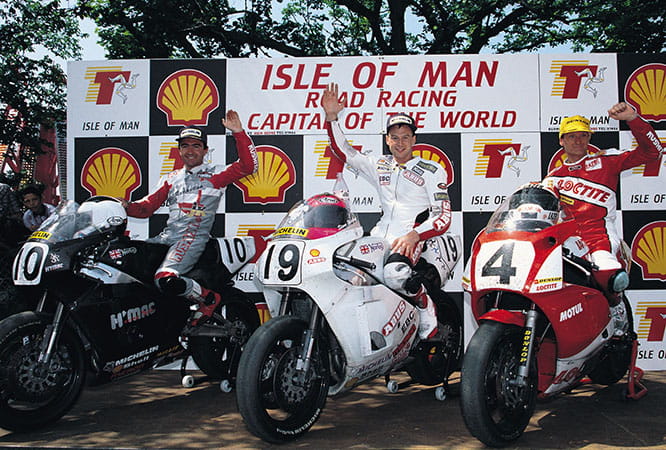 It has been billed by many as the greatest TT race of all time – and who are we to disagree?

A pugilistic battle between two of British racing’s most bitter adversaries, the 1992 Senior TT duel between Steve Hislop and Carl Fogarty was full of intrigue and sub plots as the pair fought not just against themselves, but also their previous employers at the factory Honda team.

The two had previously been team-mates, for want of a better word, at the mighty HRC but had not went into the 1992 season with plans to race at the TT.

In 1991, Hizzy had shown his mastery of the TT course by taking three wins, including the Formula One and Senior TTs, while Foggy, had won those two flagship races the previous year.

Foggy was a jobbing rider in 1992 and signed for Yamaha to race in the British championships to fund his private Ducati effort in world superbikes. For the TT, he was mounted on the Loctite sponsored OW-01 – a good bike, but certainly no match for the bespoke Formula One-spec V4 Honda RVFs.

Hislop, meanwhile, found himself in negotiations with Norton, the troubled British manufacturer trying to make a comeback with its fast but ferocious rotary engined that was developed by famed engineer Brian Crighton.

In it’s distinctive black and gold colour scheme, the NRV588 had proved fast on the short circuits in the hands of Ron Haslam, but was unfancied and considered too flighty as it made its debut on the 37.73 mile long road course. The plain white fairings told the story of the serious lack of budget in the team but Hislop put up a spirited ride in the week’s opening Formula One TT to take second behind Philip McCallen and his old Honda team, while Fogarty retired the Yamaha.

But it was the blue riband Senior which set the world alight. Starting at number four, Fogarty was first away, with Hislop departing at 19.

Separated by by over a minute on the road, but never more than 7.5 seconds on corrected time, the pair wrung the necks of their respective bikes as the lead swung between the two. Despite his bike falling apart underneath him, Fogarty set a new lap record of 123.61mph on the final lap, a figure that would stand for seven years. Despite his rival’s onslaught, Hizzy was able to bring his Norton home in a time just 4.4 seconds quicker than his rival after almost two hours and 228 miles of racing. It was one of bike racing’s most famous victories, a remarkable achievement for Hislop and the Norton team, being the first win for a British manufacturer since Triumph’s Production TT win in 1975 and, at the time of writing, the last time a British marque won one of the big bike races.

After the race, both riders declared that they were quitting the TT to concentrate on short circuit racing.

Foggy, to his word, never raced the TT again. He signed for the factory Ducati team and focused his attention on the increasingly popular Superbike World Championship, becoming the series’ most successful rider with 59 race wins and four titles to his name. Hislop took a year’s sabbatical from the TT but was tempted back to the big H for 1994, scoring two more big bike wins before switching full-time to the short circuits, where he won two British Superbike Championship titles before his untimely death in a helicopter crash in 2002.

You can find all the latest TT news, results and features right here at Bike Social throughout TT fortnight.