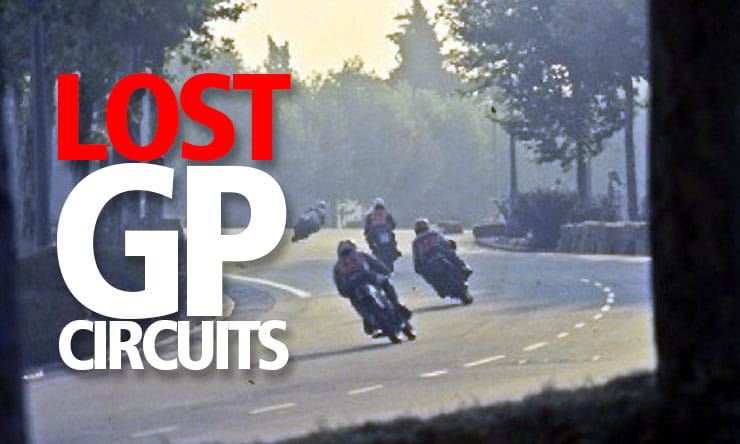 Over the years of motorcycle racing since Grand Prix racing began in 1949 we've been treated to epic and memorable battles on some of the world's greatest grand prix circuits – many of which have now changed beyond all recognition or simply no longer exist.

Safety concerns have forced circuit redesigns or scrapping altogether. Road circuits such as the TT have lost their world championship status, brand new tracks in Spain have flooded the schedules while cash-rich newcomers such as Qatar have brought an all-new, floodlit ‘look’ to premier class racing.

But where does this leave the older, discarded, classic circuits that live on so profoundly in recent memory? What about the old Hockenheim’s 200mph straights, the bonkers-fast Saltzburgring, the train tracks of Imatra and many others. Where – if at all – are they now? To find out, we’ve gone on a trip down ‘memory lane’ – or is that ‘memory track’? 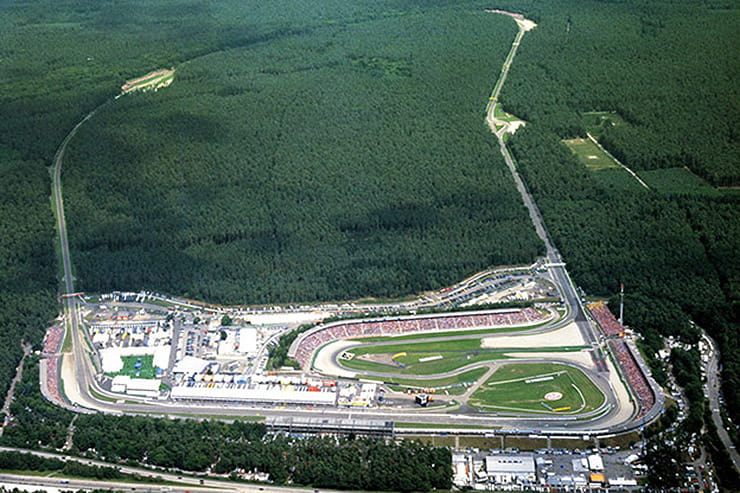 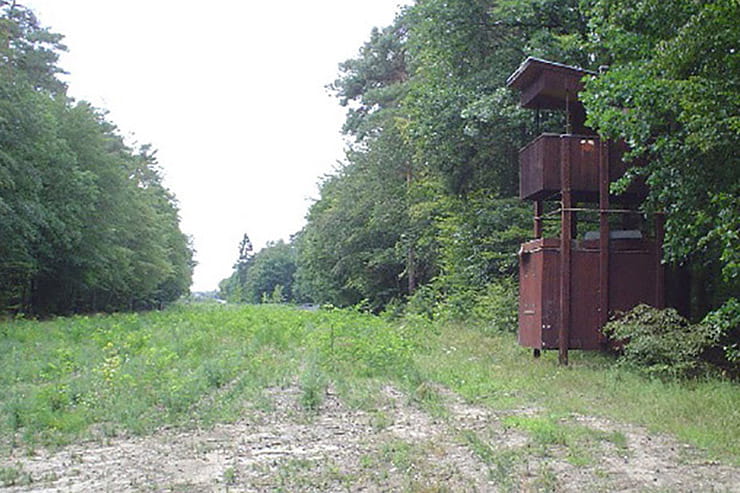 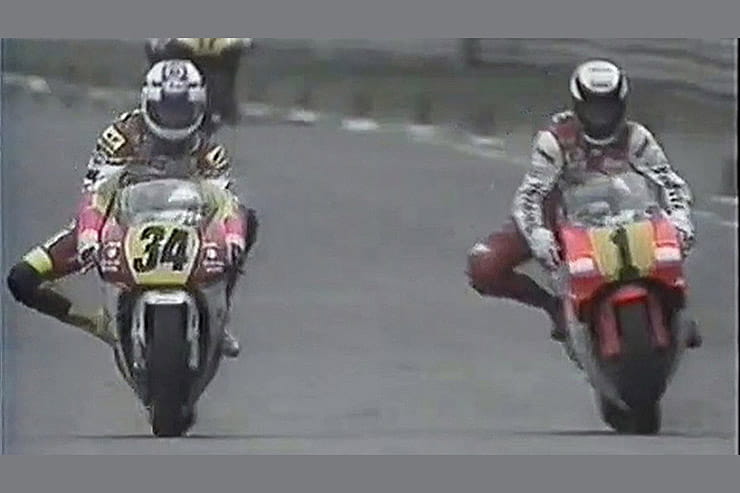 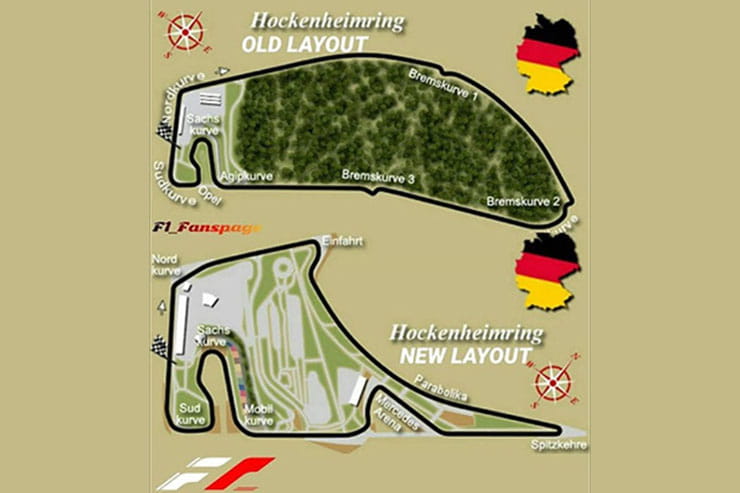 Hockenheim near Heidelberg may still exist as a GP venue, hosting the German F1 Grand Prix as recently as 2019 (although it hasn’t held a MotoGP since 1994), but most motorsport fans would agree it’s a shadow of its former self after being drastically remodelled in 2002.

Originally built in 1932, the original 8km-long circuit was characterised by two long, high speed sweeping straights through forests, culminating in a massive concrete stadium section, called the ‘Motodrom’, built in 1965.

Following F1 ace Jim Clark’s tragic fatal accident in 1968, these gained two chicanes, the track was lined with Armco barriers in 1970 and a further chicane was added in 1982 following the death of F1 star Patrick Depailler.

It’s probably this layout which is most ingrained in the memory of 500GP fans in the 1980s and 1990s. Who could forget, for example, Kevin Schwantz’s astonishing pass on Wayne Rainey in 1991 coming into the stadium?

In the early 2000s, however, F1 officials demanded a drastic shortening when, at a controversial 2000 F1 GP, almost all of the action took place away from the crowds at the chicanes. In 2002 the long, forested straights were truncated and, even more controversially for some, the old sections were torn up and replanted eliminating any chance of using the old course in the future. 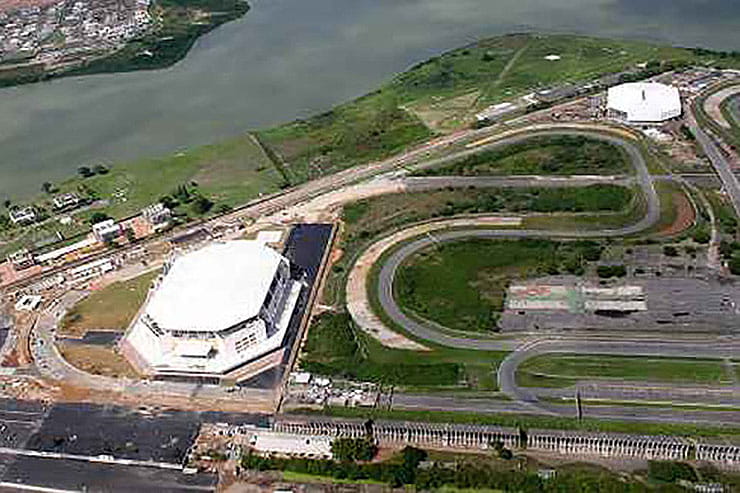 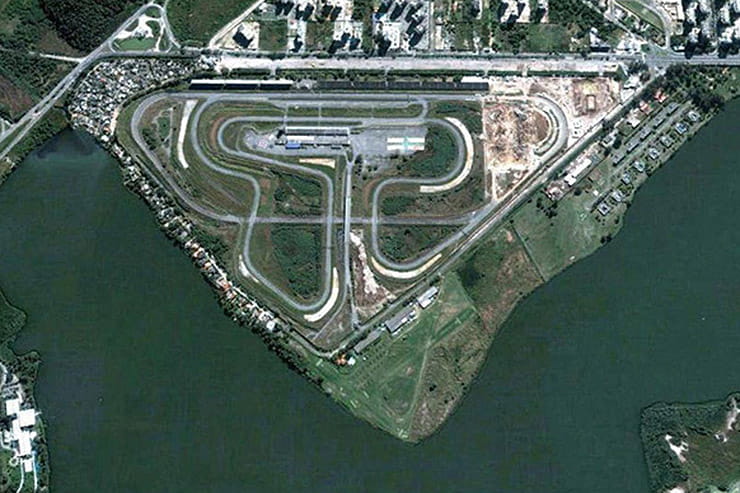 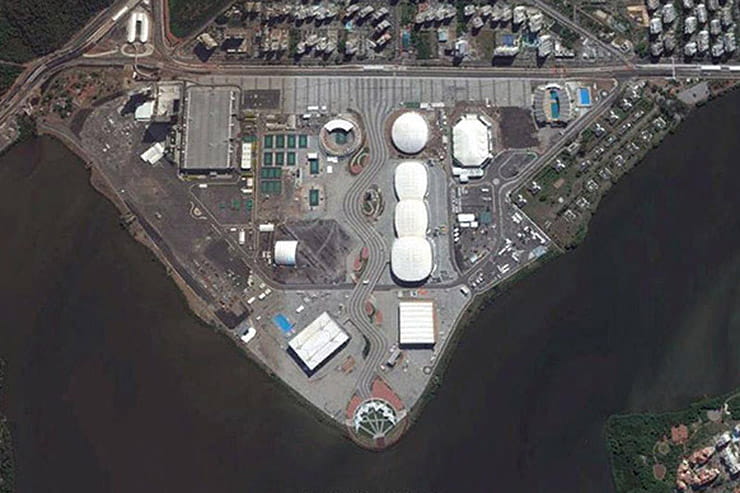 Brazil’s ‘Autodromo Internacional Nelson Piquet’, also known as Jacarepagua, was a purpose-built racing circuit in a southern district of Rio de Janeiro which opened in 1977, hosted Brazil’s F1 GP on 10 occasions and also hosted the country’s motorcycle GP from 1995 to 2004, the first being won by Luca Cadalora on a Yamaha, the last by Makota Tamada for Honda. In between Valentino Rossi had won the event four times and Mick Doohan twice.

The venue was partially demolished in 2012 to make way for facilities to be used in the 2016 summer Olympics.

Although there’s been no Brazil motorcycle GP since, it was recently announced that MotoGP will return to Brazil from 2022 after the signing of a five-year deal to race at the all-new Rio Motopark. 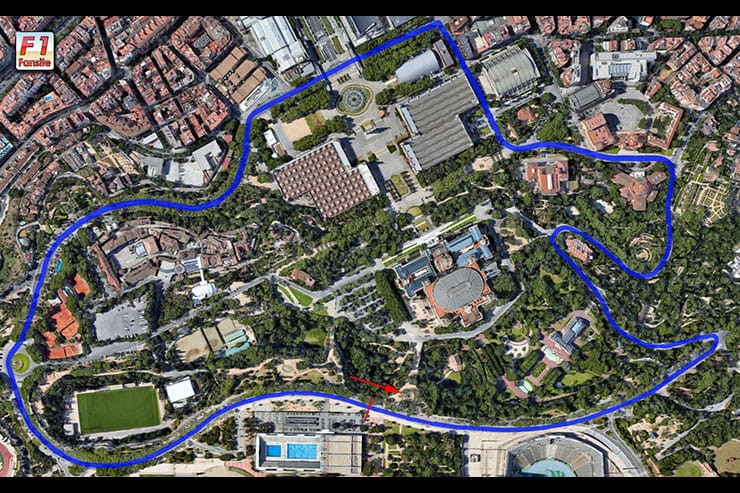 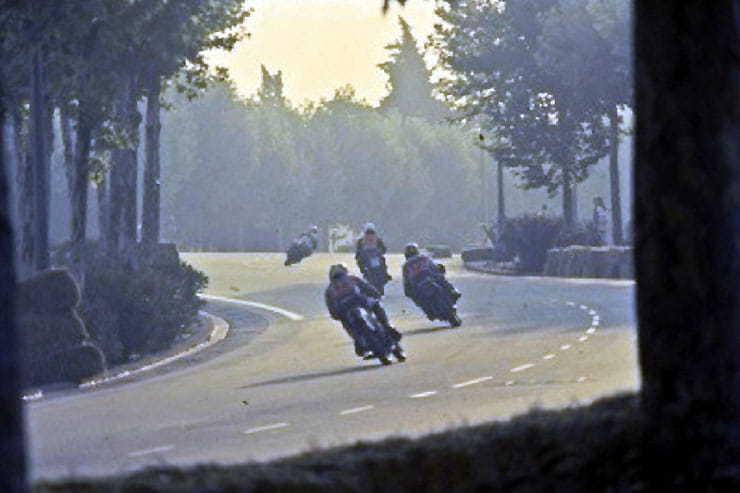 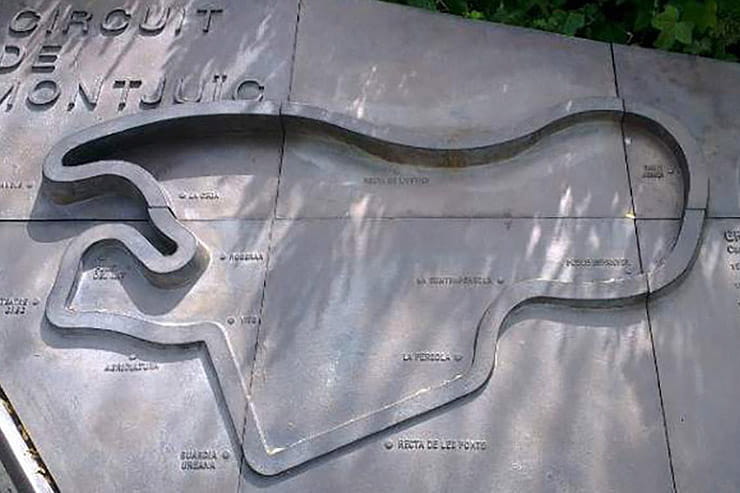 Montjuich is a former street circuit located just outside Barcelona, Spain, which held the Spanish motorcycle GP from 1950-68 then on alternate years until 1976 and was also famously used for the 24 Hours of Montjuich endurance race which also inspired the name of Laverda’s 500 Montjuich model. A F1 crash in 1975 in which five spectators were killed led to the venue being dropped as a world championship venue.

The area was significantly redeveloped for the 1992 Barcelona summer Olympics although in 2004 the city council decided to mark the layout of the old circuit. A memorial plaque is also at the scene. 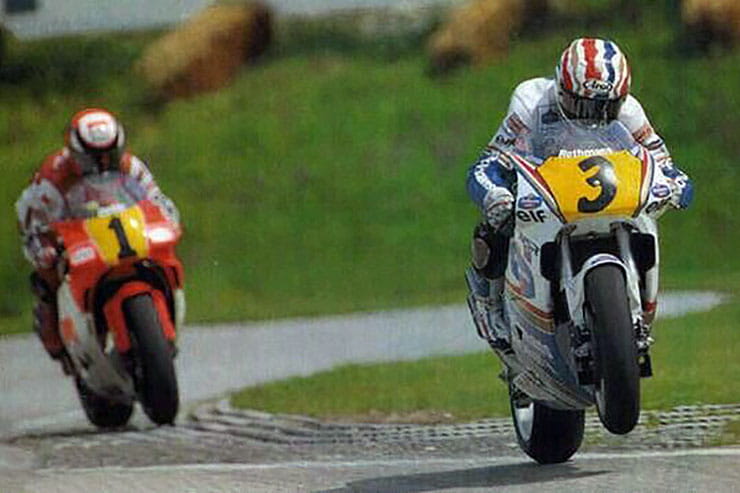 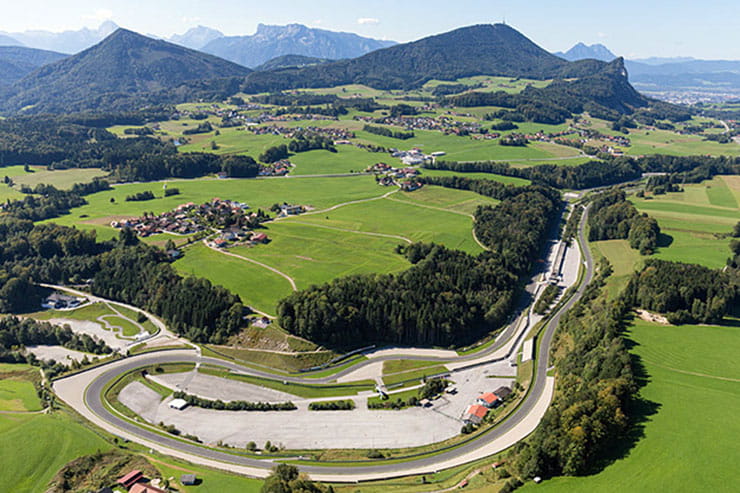 The former home of the Austrian GP, the 4.2km circuit located just east of Salzburg, opened in 1968 quickly gathering a fearsome reputation for high speed. Lying in a narrow, alpine valley it’s considered to have one of the most beautiful settings for a race circuit, with the hillsides forming natural grandstands and providing an unusual top-down view on racing action. Its straightforward layout comprises two long straights plus the sweeping and fast ‘Fahrerlagerkurve’ (paddock turn) which Mick Doohan, who won the last bike GP held there in 1994, famously described as his all-time favourite section of track, likening it to “Threading a motorcycle through the eye of a needle at 180mph whilst banging fairings with your competitors with Armco barriers on each side. Sure it was fast and dangerous, but also enormous fun. To me it’s what motorcycle racing is all about.” The Osterreichring/A1 Ring (see below) took over the Austrian GP in 1996 and 1997 since when the event has been dropped from the calendar.

The circuit is still used in touring car racing and the like but is no longer a grand prix venue. 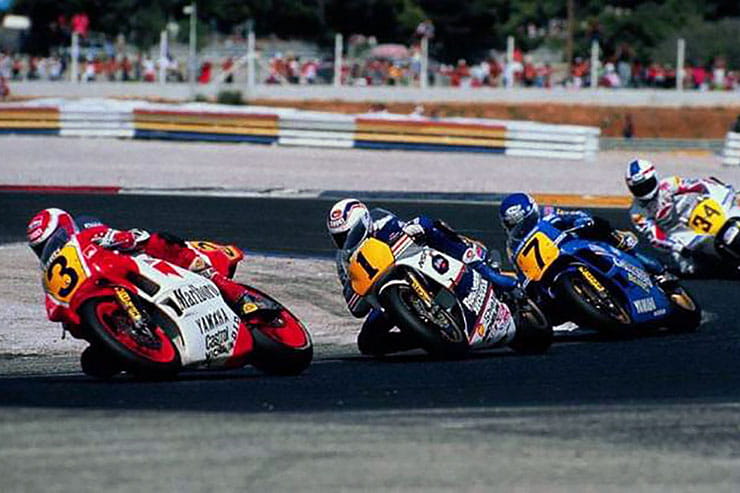 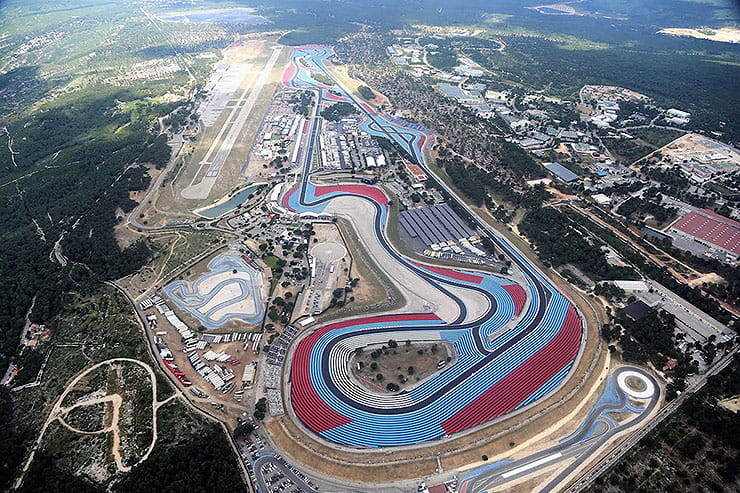 Built in 1969 at Le Castellet in the hills above Toulon on the French Riviera with finance from the Pastis magnate, Paul Ricard hosted the French GP 13 times and was home to the Bol d’Or 24-hour endurance race up to 1999 when, after Ricard’s death, it was sold to Bernie Ecclestone who converted it into a F1 test track.

However the circuit, now looking very different with blue and black striped run-off areas instead of gravel, returned to racing in 2015 when it again hosted the Bol d’Or and again hosted the French F1 Grand Prix in 2018 and again in 2019, both won by Lewis Hamilton.

The original circuit was famed for its 1.8km-long Mistral Straight, which helped create some epic GP battles, most notably a four-way, race-long battle in 1988 between Wayne Gardner, Eddie Lawson, Christian Sarron and Kevin Schwantz. 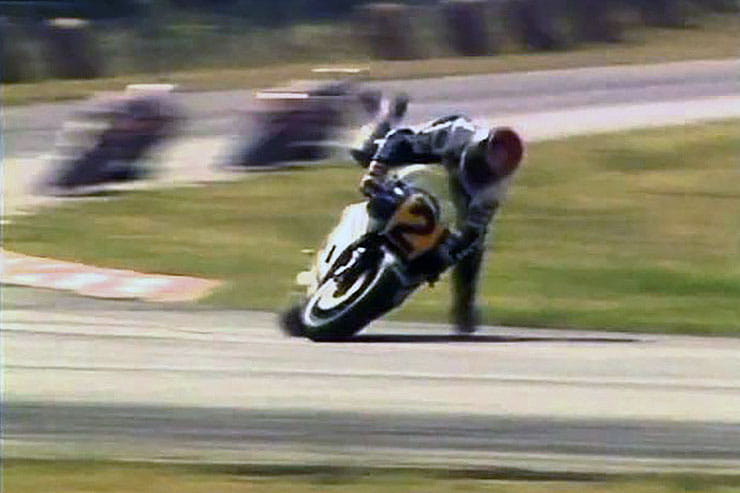 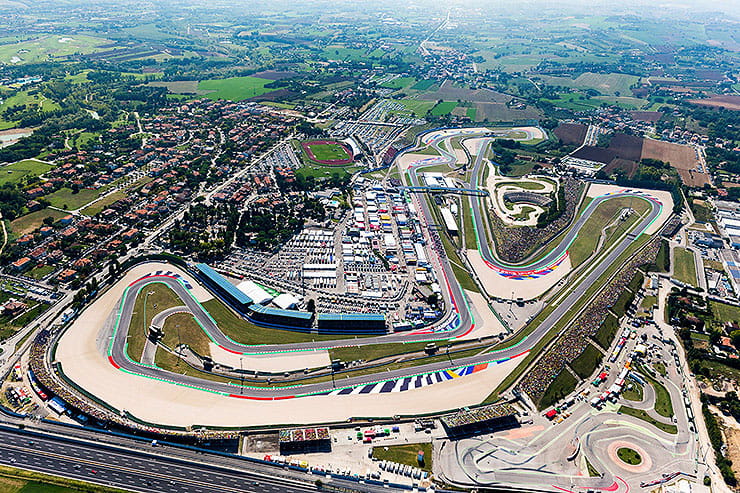 Strictly speaking, Misano survives, albeit in completely transformed form since its direction was reversed and extensively modified in 2006 and then, in 2012, renamed to commemorate Marco Simoncelli. Many, however, still have fond memories of the original ‘old Misano’.

Located on Italy’s Adriatic coast near Rimini it hosted its first event in 1972 and became the venue for the San Marino GP from 1985 (when Randy Mamola had his famous NS500 highside ‘save’) and, occasionally, the Italian GP. Tragically it was in this event in 1993 that reigning world champ Wayne Rainey fell and broke his back. This and other safety concerns led to the circuit being remodelled in 2006, completely reversing its direction, to regain world championship status. 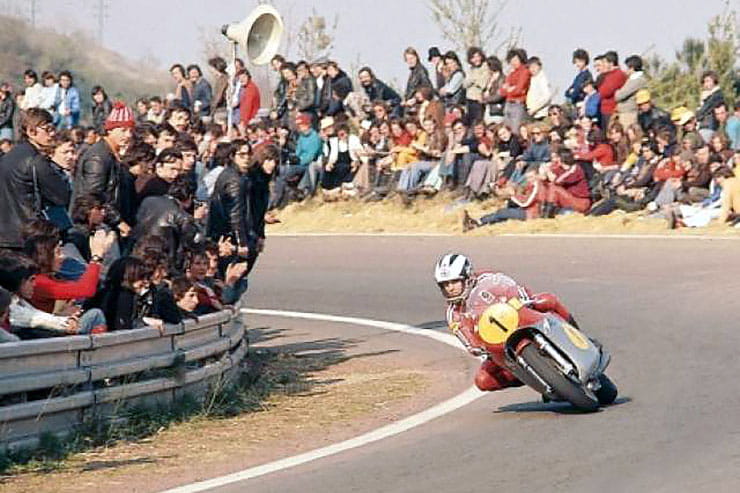 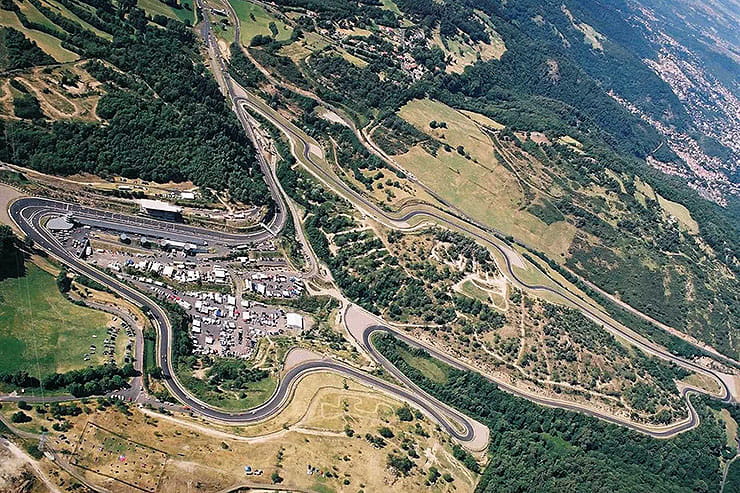 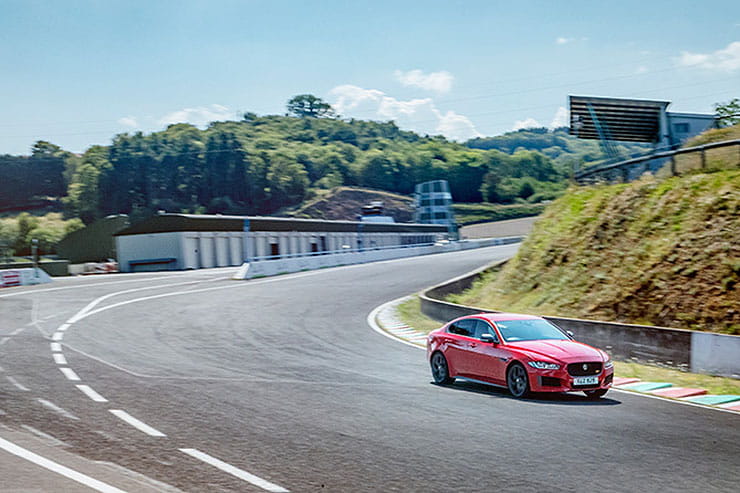 Also known as the Charade Circuit, the narrow, mountainous track was built in 1958 around the sides of an extinct volcano in central France’s Auvergne mountains. Originally 8km long it became likened to an even twistier and faster Nurburgring. It was home to the French GP between 1959 and 1967 and in 1972 and 1974. It also features significantly in the 1966 movie Grand Prix, starring James Garner. However, rock debris often caused punctures and due to its layout it was not possible to improve run-off and safety. The last F1 race was held in 1972. Phil Read won the last motorcycle GP and the last race on the full circuit was held in 1988.

Today the venue remains in use for track days and historic events. The roads it used were closed to the public in 2000 and the venue became a permanent facility with new pit garages. The current lap record was set by a Jaguar in 2018 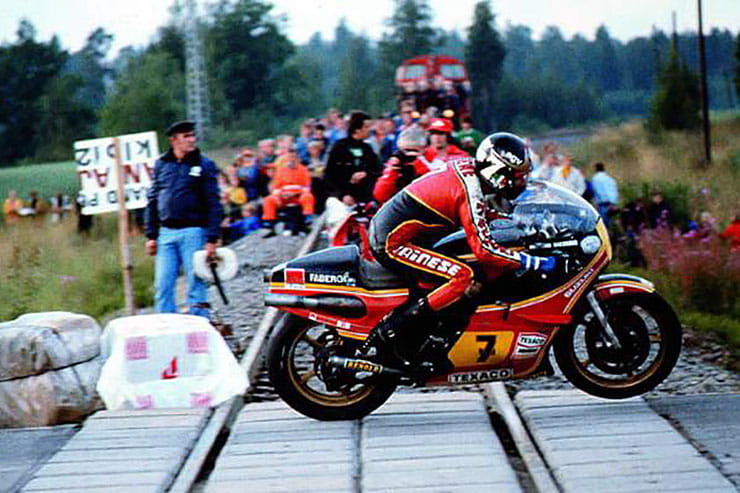 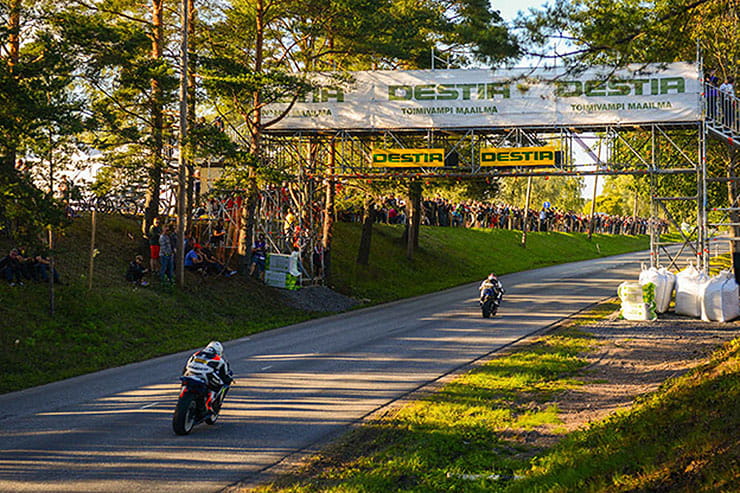 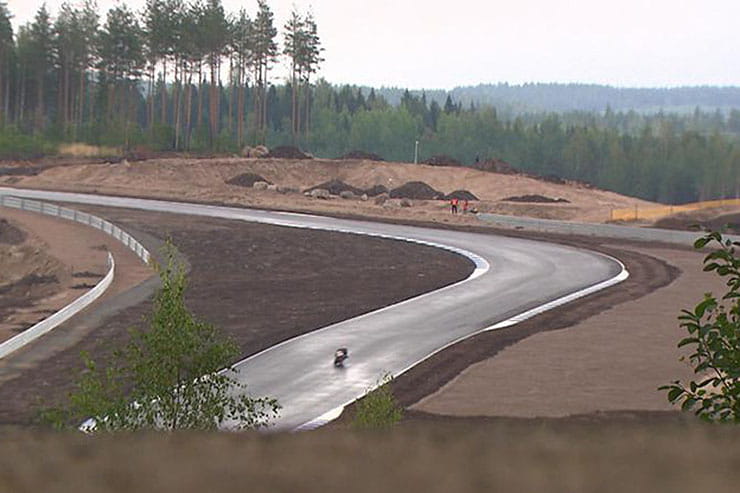 The infamous street circuit near the Russian border was home to the Finnish motorcycle GP between 1962 and 1982. Composed of sections of closed-off public roads on the outskirts of the city it was reknown as a particularly scenic track that ran through woods and beside lakes. Its most famous feature, however, was the sight of racers – most famously Barry Sheene – literally jumping their machines at full speed across the train track which crossed the course. Giacomo Agostini won the 500 event 10 times and seven more on the 350. The last 500cc Grand Prix there was won by Marco Lucchinelli. 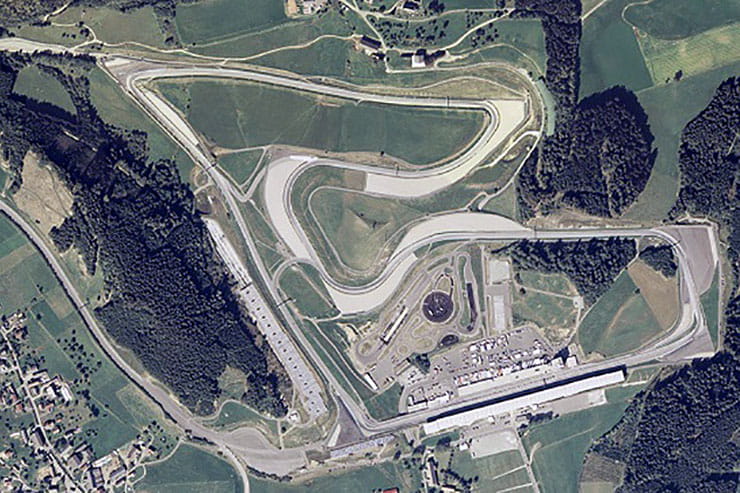 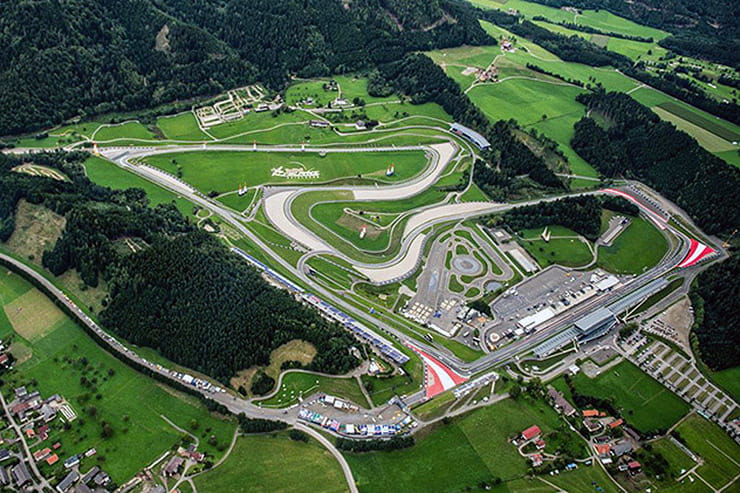 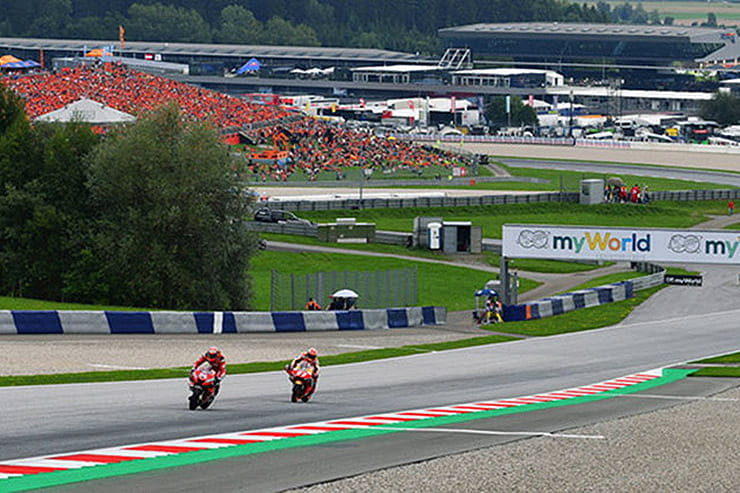 The spectacular 5.9km track, also known as Zeltweg, opened in 1969 and has since been completely remodelled twice, first as the A1-Ring in 1996 and then as the Red Bull Ring in 2011. Purists, however, consider neither a patch on the original.

Characterised by hugely fast corners and lots of elevation changes it hosted the Austrian F1 GP from 1970 to 1987 (becoming one of the most popular venues). A number of accidents then, however, led to it being decreed as not up to F1 standards. A1 telecoms financed a remodelling taking out most of the fast corners and leading to F1’s return from 1997 to 2003. Further remodeling under Red Bull led to its return again in 2014. Although it didn’t host the Austrian motorcycle GP until 1996, it was a fixture on the WSB calendar from 1988 to 1994. The chilling crash this year, when Zarco and Morbidelli’s coming together almost took out Viñales and Rossi, has raised concerns that the track layout needs to change again. 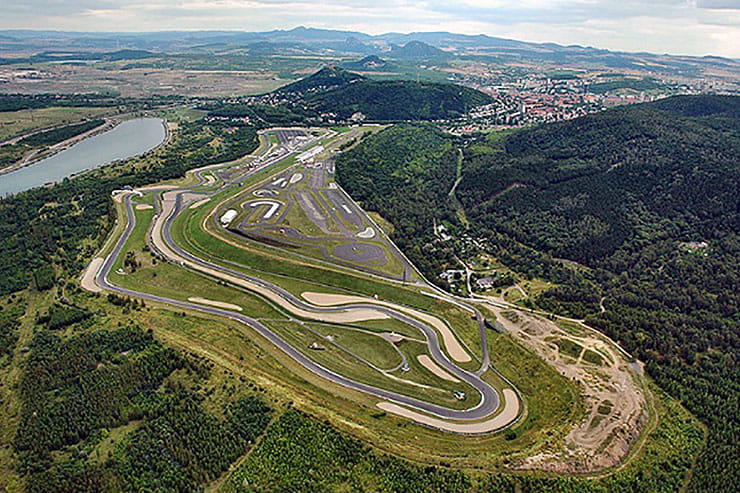 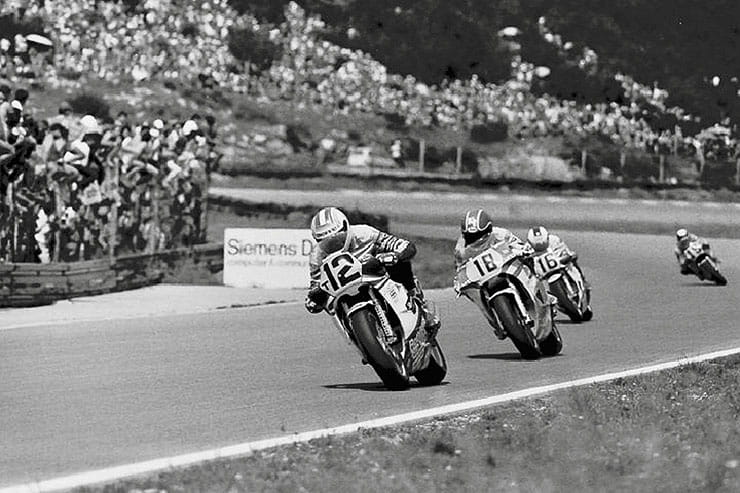 Now known as the Automotodrom Grobnik in reformed Croatia, the 4.1km Rijeka circuit was home to the Yugoslavian motorcycle GP from 1978 to 1990, the last being won by Wayne Rainey. That year an event littered with organisational and safety complaints from riders and a horrific crash which ended the career of 250 rider Reinhold Roth, led to it being dropped from the GP calendar. Although the circuit survives it is now mostly used for national racing and racing schools. Freddie Spencer, Wayne Garner and Eddie Lawson all won the 500cc event twice.