The mid-late ‘60s with its carte blanche on technical specifications was arguably the last ‘golden age’ for motorcycle GP machinery, leading to such wonders as not just Honda’s legendary RC166 250-6 but also a Suzuki 50cc triple and Yamaha’s RD05A.

That all came to an end in 1969 when the FIM, in a bid to reduce costs for non-works teams, brought in new rules restricting all classes to six gears, 350 and 500s to four cylinders and all others to two, which prompted a walk-out by the Honda, Suzuki and Yamaha teams – although MV soldiered on with their magnificent four-stroke triples and fours.

Here’s our 10 of the most extreme and wonderful bikes of that golden era. 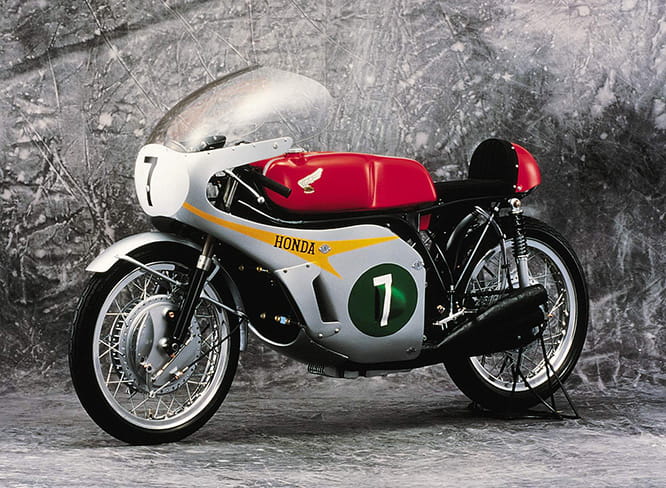 The RC166 or, perhaps as it’s better known, Honda’s 250-6, is arguably the most iconic racing motorcycle of all time, not just for its technology but for its racing success. A four-stroke DOHC, 24-valve six it revved to 20,000 screaming rpm and produced 65bhp which, through a 7-speed gearbox, propelled it to over 150mph. In 1966, Mike Hailwood didn’t just win the 250cc world title, he won all 10 races. The pair retained the title the following year. 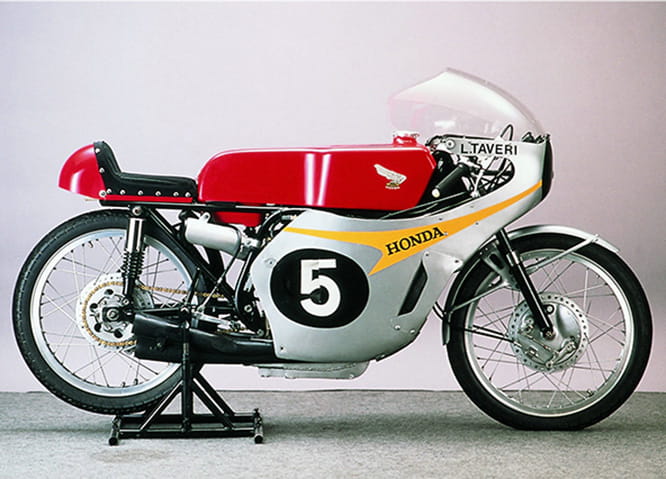 Thought the RCV211V was Honda’s first ‘five’? Think again. Big H’s 1966 RC149 was an exquisite in-line five-cylinder machine – the smallest five ever built in fact – that was made entirely from magnesium, revved to a massive 23,000rpm and yet would stall if it fell below 17,000rpm which is why it had a nine-speed gearbox that had to be worked continuously. Swiss works rider Luigi Taveri did just that in 1966 to win that year’s 125cc world championship, prompting Suzuki and Yamaha to respond with new four-cylinder 125s. 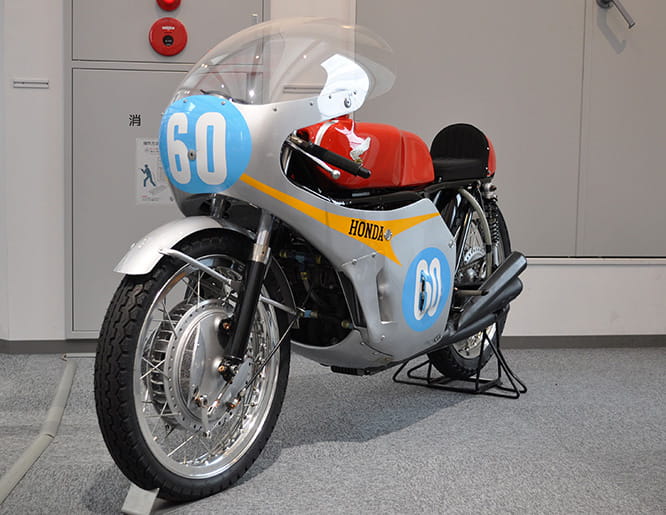 The famous RC166 wasn’t Honda’s only racing six. Inspired by the success of the 250 in 1966, for 1967 Honda produced an enlarged, 297cc version designated the RC174, which was produced to compete in the 350cc class. It was so successful it won seven out of the eight rounds in the hands of Mike Hailwood who, inevitably, also was crowned world champion that year. In fact, Hailwood’ is reported of saying of it: ‘It was so fast I could have won with one arm tied behind my back.’ Unfortunately, it was also the ‘Six’s last hurrah as Honda pulled out of GPs the following year. 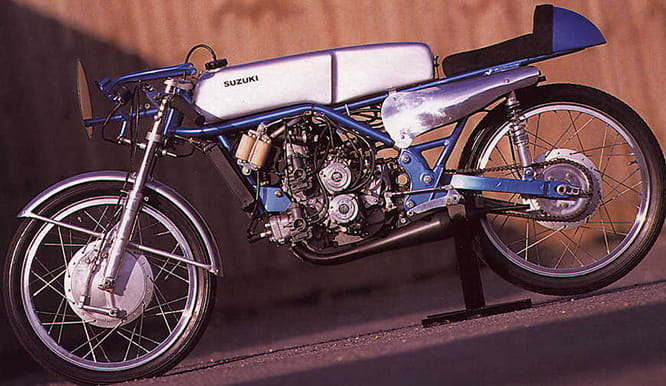 In 1961 East German MZ works rider Ernst Degner had defected to the west and joined the Suzuki team taking the German two-stroke technology with him to such an extent that, with Suzuki, he immediately won the 50cc world title in 1962. Hugh Anderson repeated the feat in 1963 and 1964. By 1967, however, Suzuki’s singles and twins had been discarded for ever more sophisticated multis, culminating with the liquid-cooled, square-four two-stroke 125, the RS67. It produced 42bhp at 16,500rpm had a 12-speed gearbox and became the template for the RG500 of the ‘70s and ‘80s. 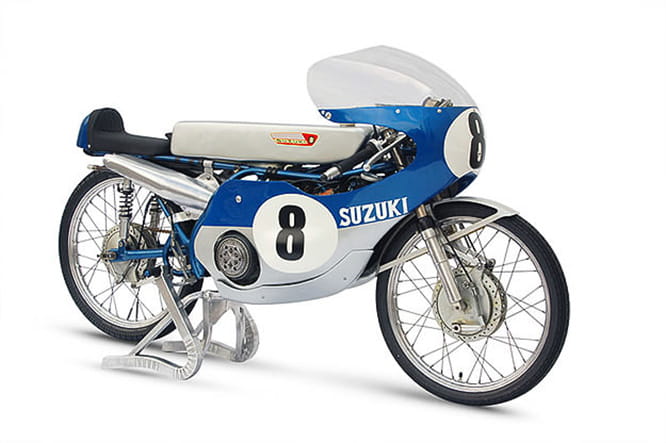 If the RS67 125 was sophisticated, so too was its 50cc little brother. The RK version was a similarly liquid-cooled two-stroke, but this time a parallel twin instead of a square four. It revved to a maximum of 17,500rpm and, through its mind-boggling 14-speed transmission, was capable of a maximum speed of 170kph. All enough for the three-strong works team of Hans-Georg Anscheidt, Yoshimi Katayama and Brit Stuart Graham to dominate the championship, placing 1-2-3. 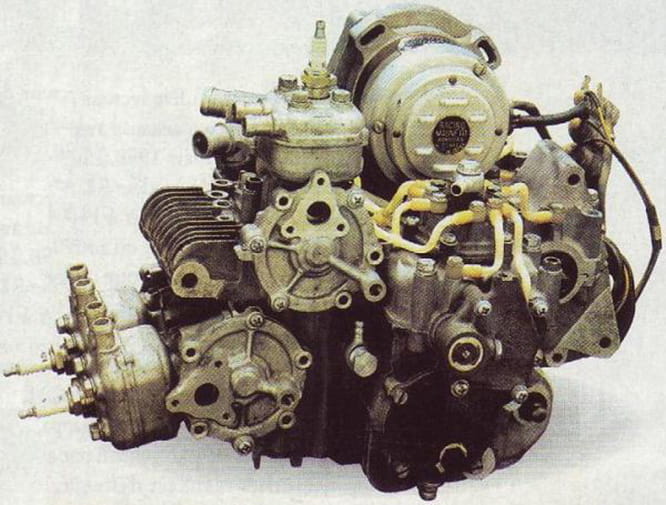 But if the RK67 50cc twin was impressive enough, Suzuki had a tiddler up its sleeve that promised to be even better yet. The 1968 RP68 was an all-new, liquid-cooled, two-stroke triple that was alleged to produce 19bhp at an enormous 20,000rpm through a 14-speed gearbox. It was ready to race at the final Japanese GP of 1967 unfortunately, however, the FIM had already announced that for 1968 50s would be restricted to single cylinder machines. Suzuki then decided there was no point in racing it, even as a one-off and it was consigned to a museum. 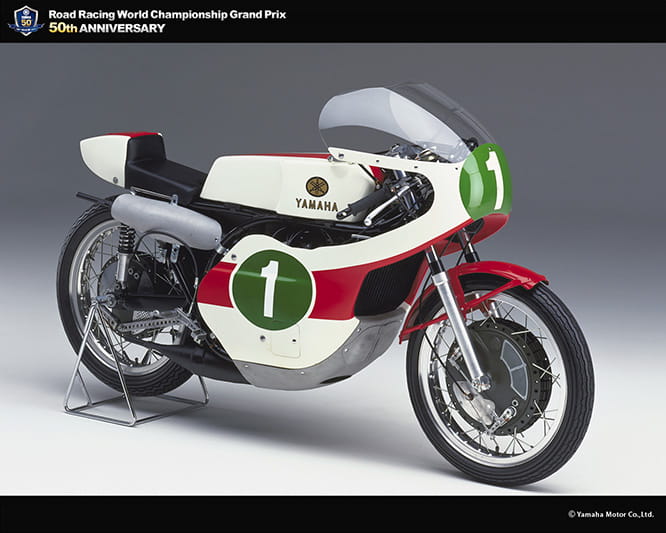 The RD05/A factory racer was Yamaha's answer to the Honda 250-6. A disc-valve, liquid-cooled, two-stroke V4 it produced 65bhp at 13,500rpm and through its 8-speed gearbox was capable of 245kph. It debuted in the 1965 Italian GP and won its first GP at the 1966 Japanese round. Completely re-engineered for 1967 it just fell short of the world title that year but returned to claim both the manufacturer and rider titles, in the hands of Phil Read, in 1968. 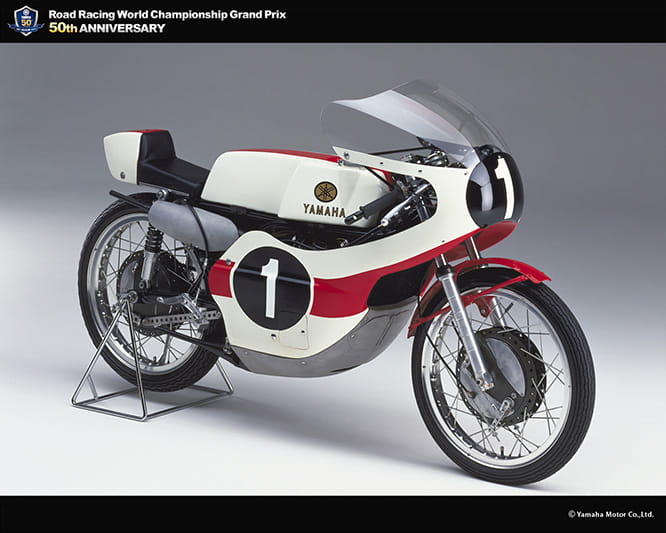 Effectively a scaled-down version of the RD05 in being a liquid-cooled, disc-valve two-stroke V4, the 31A won the opening round and went on to dominate the 1967 season with the late Bill Ivy scooping eight wins (and the title) and teammate Phil Read two. The following year, with Honda having pulled out, Yamaha were set to win both the 125 and 250 titles with Yamaha ordering Read and Ivy to win a title each, however, having secured the 125 title, Read ignored these orders, tied with Ivy on points and also took the 250 title on overall race times leading Ivy to quit the team. 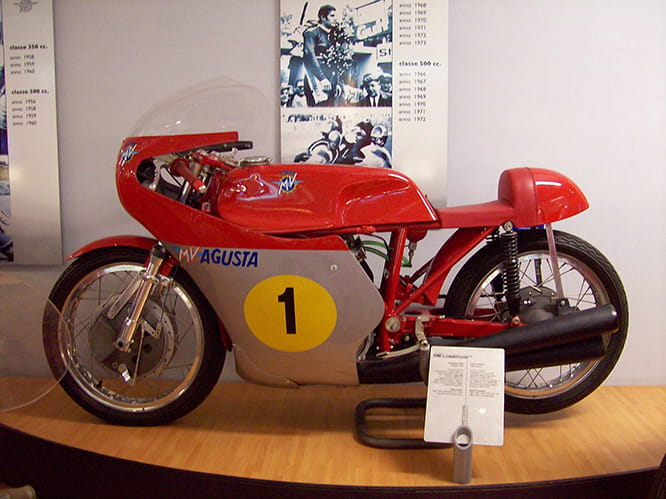 Despite all of Honda’s technological efforts, however, one title always eluded the ambitious Japanese concern – that being the most revered of all, the Blue Riband 500cc class. And it wasn’t for a lack of trying. In 1966 Hailwood’s Honda RC181 four was second to Agostini. The following year the pair tied on points, the Italian claiming the crown due to three second places compared to Hailwood’s two. In fact, MV won EVERY 500cc title throughout the ‘60s, the triple winning seven in a row from 1966 to 1972. The 500-3 had been introduced in 1965 as a 350, then developed into a 500. It was DOHC with four valves per cylinder and a seven-speed gearbox. 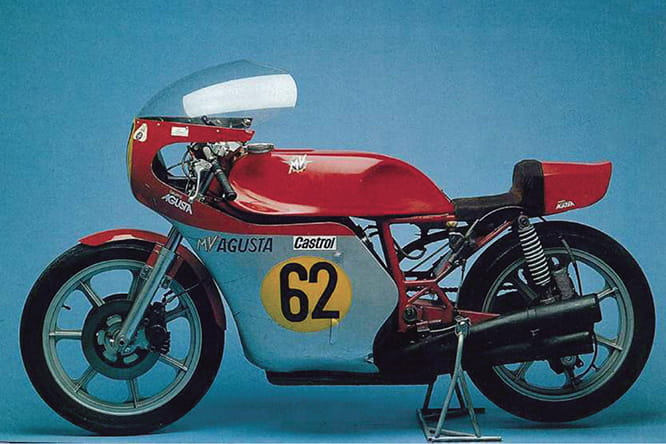 In the absence of the Japanese, Agostini’s MV swept the 500s titles all the way to 1972. That year Yamaha returned with its new two-stroke TZs forcing MV to respond with a new 350-4 which grew to a 500 for 1973, which gave works rider Phil Read the title. The following year it was revamped to produced 102bhp at 14,600rpm enough to give Read and MV their last title. Two strokes thereafter dominated until the MotoGP era.